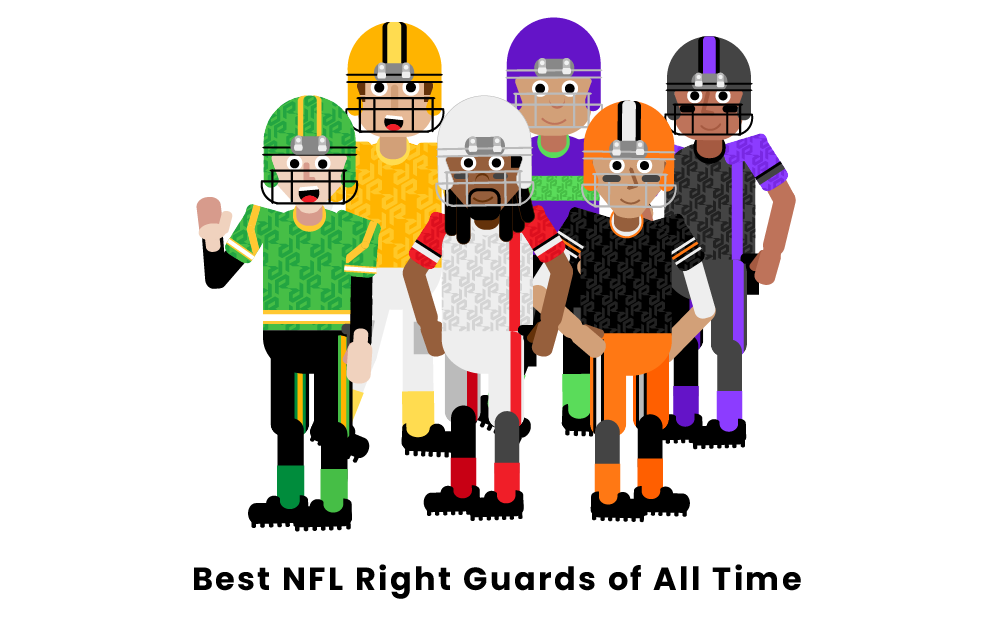 The right guard position in football is a key part of the offensive line. They are required to have good mobility for run blocking and great strength for pass blocking. The best NFL right guards of all time excelled at both of these aspects of the position. Here are the six best players to ever play right guard in the NFL.

Who are the best NFL right guards of all time?

Joe DeLamielleure is arguably the best NFL right guard of all time. He was drafted 26th overall in the 1973 NFL Draft by the Buffalo Bills. He was a member of the Bills’ historical offensive line known as the “Electric Company”. This unit was led by DeLamielleure and was credited with being the reason running back O.J. Simpson was able to break multiple NFL rushing records. This led to DeLamielleure’s reputation as one of the NFL’s all-time elite run blockers.

Throughout his thirteen-season NFL career, DeLamielleure played for the Buffalo Bills and the Cleveland Browns. DeLamielleure was selected to six consecutive Pro Bowls from 1975 to 1980 and earned the honors of 1st team All-Pro three times. He also proved to be incredibly durable by playing in 185 consecutive games during his career, starting in 175 of them. DeLamielleure’s dominance as a blocker even got him chosen as a member of the NFL’s 1970s All-Decade team.

Larry Little signed with the San Diego Chargers in 1967 as an undrafted free agent. Little spent two seasons with the Chargers before being traded to the Miami Dolphins in 1969, where he established himself as one of the top offensive linemen talents in the NFL. Under Hall of Fame coach Don Shula, Little became a premier pass blocker and was synonymous as the lead blocker on the famous Dolphin sweep runs. His dominant and versatile blocking skills helped the Dolphins win two Super Bowl championships and achieve their elusive perfect regular season in 1972. Throughout his fourteen-season career, Little was a five-time Pro Bowl selection and named to five first-team All-Pro selections.

Marshal Yanda played his entire thirteen-season career with the Ravens as one of the greatest right guards the NFL had ever seen. He was drafted 86th overall in the 2007 NFL Draft by the Baltimore Ravens. Upon entering the NFL, Yanda immediately became a dominant force on Baltimore's offensive line and a leader within the team’s locker room. He proved to be durable, starting 170 games, including the playoffs. Yanda’s elite blocking skills were reflected through his eight Pro Bowl selections and combined seven first and second-team All-Pro selections.

In 2012, Yanda helped lead the Ravens to their second Super Bowl victory in franchise history, defeating the San Francisco 49ers. Yanda decided to retire from the NFL after the 2019 season. He is regarded as a generational talent, named to the NFL’s 2010s All-Decade. In 2020, the Ravens announced that Yanda would be inducted into the franchise’s Ring of Honor, and he will be first eligible for the Pro Football Hall of Fame in 2025.

Will Shields was drafted 74th overall in the 1993 NFL Draft by the Kansas City Chiefs, where he played his entire fourteen-season career. In his first NFL game, teammate Dave Szott suffered an injury, and Shields came in to replace him. The rest, as they say, is history. Shields never missed another game in his career; his 224 games played and 223 starts are both Chiefs franchise records. He was successfully able to pair his durability with impressive blocking skills.

In 1994, Shields helped his fellow linemen only allow 19 sacks throughout the season, a Chiefs franchise record. Shields was also selected to the Pro Bowl for an astounding twelve consecutive seasons during his career and earned 1st team All-Pro nods twice. In 2003, he won the Walter Payton Man of the Year award for his prominent role in aiding the Kansas City community.

Jerry Kramer was drafted 39th overall in the 1958 NFL Draft by the Green Bay Packers. He played all eleven seasons of his career with the Packers. It did not take long for Kramer to establish himself as one of the premier blockers in the NFL. Under Hall of Fame coach Vince Lombardi, Kramer was elected to three Pro Bowls and was first-team All-Pro five times.

Kramer was a focal point of Green Bay’s dominance during this era of football. Kramer helped the Packers win five NFL Championships and repeat victories in Super Bowls I and II. Although Kramer's legacy is as one the best right guards in NFL history, he spent parts of his career as the Packers’ placekicker, where he was more than serviceable. Kramer finally reached football immortality in 2018 when he was elected into the Pro Football Hall of Fame.

Zack Martin was drafted 16th overall in the 2014 NFL Draft by the Dallas Cowboys. He is still active in the NFL and has spent his entire eight-season career with the Cowboys. Martin was a highly-touted prospect coming out of college and has more than proved his abilities as a blocker since joining the league.

Martin has been selected to the Pro Bowl in seven out of the eight seasons that he has been in the NFL. In those seven Pro Bowl seasons, Martin also earned five first-team and two second-team All-Pro selections. Since joining the Cowboys’ offensive line, Martin has helped solidify them as one the top units in the NFL, propelling star running back Ezekiel Elliott to win two NFL rushing titles (2016 and 2018). When it’s all said and done, Martin has a good shot at being inducted into the Pro Football Hall of Fame and may be considered the best right guard to ever play in the NFL.

Shaq Mason is a Super Bowl-winning right tackle for the Tampa Bay Buccaneers. Before he was drafted in the fourth round of the 2015 NFL Draft by the New England Patriots, Mason played at Georgia Tech. At right tackle for the Yellow Jackets, he made first-team All- ACC in 2013 and 2014 and first-team All-American in 2014. Mason had a solid rookie season, and in his second season with New England, he helped the team achieve a championship in Super Bowl LI, defeating Atlanta in overtime. The Patriots signed Mason to a five-year $50 contract extension, and he helped them win another Super Bowl LII over the Rams. Mason was traded to Tampa Bay in 2022, where he again played with star quarterback Tom Brady.

Though he had humble beginnings, Jahri Evans was one of the best right guards in NFL history. He was from a small liberal arts college, but the New Orleans Saints saw something in him and chose Evans as their fourth-round draft pick in 2006. In the NFL, he also shifted from his collegiate past as a tackle and started as a right guard. Both of these risks paid off as Evans was a powerhouse on the Saints’ offensive line and even led them to a national title at Super Bowl XLIV. During his eleven-year career, he was even selected for the Pro Bowl six consecutive times and signed a $56.7 million contract in 2010, making him the highest-paid interior offensive lineman of all time. After he retired, Jahri Evans was selected for the Pro Football Hall of Fame All-2010s Team.

Who is the best NFL right guard of all time?

Joe DeLamielleure is widely acknowledged as the best NFL right guard of all time. He was an elite blocker and durable throughout the entirety of his career. DeLamielleure was selected to six Pro Bowls and made a total of seven All-Pro teams (three 1st team, four 2nd team). In 2003, his legacy was further bolstered by an induction into the Pro Football Hall of Fame. DeLamielleure set the gold standard for run blocking from the right guard position.

What NFL right guard has the most Pro Bowl selection all time?

Will Shields has the most Pro Bowl selections of all time at the right guard position. He received the honor twelve times throughout his career. During his fourteen-season career, he only missed the Pro Bowl in his first two seasons. Shields’ twelve Pro Bowl selections tie him for 9th most all-time by any NFL player. He also is tied for the 2nd most selections ever received by an offensive lineman.

What NFL right guard has the most 1st team All-Pro selections all time?