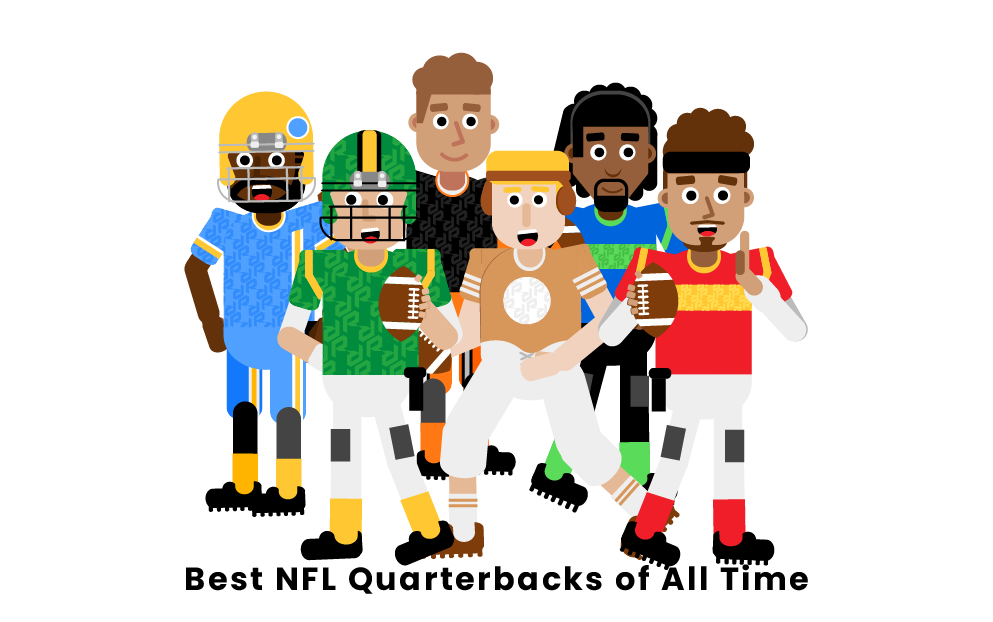 The National Football League has existed for over 100 years and has produced numerous legendary quarterbacks. The quarterback is the field general of the offense as he decides where the ball is going on a play. Below are the six best quarterbacks to have ever played in the NFL.

Who Are The Best NFL Quarterbacks of All Time?

Out of everyone on this list, Tom Brady was the most unlikely story out of all of them. Brady was drafted by the New England Patriots in the sixth round, at Pick #199, in the 2000 NFL Draft. In one of his first days at the Patriots facility, he famously introduced himself to owner Robert Kraft and said he would never regret taking him. What followed was six Super Bowl wins in 20 years with New England, including a 28-3 comeback over Atlanta in Super Bowl LI. However, perhaps Brady’s best season was in 2007, in which he set a then-NFL record with 50 touchdown passes, won his first MVP Award, and led New England to a 16-0 regular-season record. The Patriots would lose Super Bowl XLII, but Brady did throw a go-ahead touchdown with under three minutes remaining, despite struggling most of the game due to a relentless Giants pass rush. In 2020, Brady decided he needed a new challenge and took his talents to the Tampa Bay Buccaneers, where he won the Super Bowl in his first season with the club.

Throughout the 1980s, Joe Montana was consistently one of the top-performing quarterbacks in the league. He excelled within head coach Bill Walsh’s offensive scheme, called the “West Coast Offense.” Montana could get the ball out fast and be exceptionally accurate, which allowed his receivers to run after the catch, most notably, Jerry Rice. In 1985, Rice joined him to form one of the greatest quarterback-receiver duos in NFL history. Never was this bond more evident than in Super Bowl XXIII, when Montana hit Rice for a 27-yard catch-and-run on the final drive to set up the game-winning touchdown pass to John Taylor.

Peyton Manning was known for being the biggest contemporary rival of Tom Brady, and vice versa. Manning and his younger brother, Eli, are the only quarterbacks to have a winning record against Brady in the postseason with a minimum of two games played. During his career, Peyton was known as the “Sheriff,” because he had an uncanny ability to lead and recognize any defense, figuring out where he would throw the ball before the ball was snapped. In other words, he made pre-snap football famous by basically turning the art of quarterbacking into a science. When all was set in done, he had the most passing touchdowns and yards in NFL history, but would be passed quickly by Drew Brees and Tom Brady. Manning also retired with two Super Bowl victories, including one his final season in the NFL.

Perhaps nobody has had a better single season in NFL history than Dan Marino’s 1984 campaign. Marino shattered both the single-season passing yards (5,084) and touchdowns (48) records. Both achievements stood for 20 or more seasons. That year, Marino led the Dolphins to the Super Bowl, but lost to the 49ers led by Joe Montana. Unfortunately, Marino never got back to the big game, losing in the conference championship the following season and in 1992. He was arguably the most prolific passer of his era and dominated the stat sheet like no one else prior, but not having a Super Bowl win is the only “blemish” on his otherwise Hall of Fame career.

John Elway was considered a “generational” quarterback prospect before the 1983 NFL Draft, and he delivered. Elway led the Broncos to five Super Bowl appearances during his 16-year career, winning two. He also had a knack for comebacks, as he led 47 fourth-quarter comebacks throughout his career. Perhaps his most famous one was against the Browns in the 1986 AFC Championship Game. On the road and pinned at his own two-yard line with under five minutes to play, Elway led his team all the way down the field for a touchdown to tie the game at 20. Denver would eventually win in OT, giving Elway his first Super Bowl victory.

Aaron Rodgers is considered one of the most efficient passers in NFL history. Rodgers currently holds the two highest single-season passer rating seasons ever (122.5 in 2011 and 121.5 in 2020), and he’s currently second all-time in that category. Rodgers is also a three-time MVP, with arguably his best season coming in 2020, in which he threw for a league-best 48 touchdowns to just five interceptions and led the league in completion percentage. He followed up that campaign with a 12.5-1 touchdown-to-interception ratio in 2021, the best mark ever for a quarterback with a minimum of 500 attempts. Rodgers won his only Super Bowl in 2010 and was named Super Bowl MVP, throwing for over 300 yards and three touchdowns. Aaron Rodgers’ career has been nothing short of impressive, making it more than likely he will be enshrined in the Pro Football Hall of Fame following his retirement.

Much like Tom Brady, Johnny Unitas had a rather unusual start for an all-time great quarterback. Selected by the Pittsburgh Steelers in the ninth round of the 1955 NFL Draft, Unitas was cut from the team before he could even play in a game, after which he briefly played in a semi-pro league for only $6 a game. He was signed a year later to the then-Baltimore Colts for $17,000, and got his chance to play when their starter was injured. Despite his first pass resulting in a pick-six, Unitas improved rapidly and never stopped. Unitas became an NFL legend as a result of his first NFL Championship victory in 1958, widely referred to as the “Greatest Game Ever Played.” Down 17-14 to the New York Giants with two minutes remaining, Unitas led a game-tying drive from the Colts’ 14-yard line, and then an 80-yard winning drive in overtime. By the end of his career, Unitas amassed a colossal 40,239 yards and 290 passing touchdowns, with at least one touchdown pass in 47 consecutive games, a record that lasted 50 years.

Roger Staubach started off his legendary career with the Dallas Cowboys by spending three years as their backup quarterback, only receiving the starter's job in 1971. However, once he stepped into the top spot, he never looked back. As a Cowboy, Staubach reached six NFC Championships, won four, and also won two of his four Super Bowl appearances. His dominance on the field resulted in career stats of 1,685 completions out of 2,958 passing attempts, 22,700 total yards, and 153 passing touchdowns. Staubach was known for his ability to escape the pocket under pressure, and was a solid rushing quarterback, with 2,264 career rushing yards over 410 running plays, which also resulted in 20 rushing touchdowns. His accolades made him an easy Hall of Fame candidate, and he was selected to it easily only six years after his final season in 1979.

Drew Brees was a standout on the New Orleans Saints’ roster for 14 years, but he started his career on the then-San Diego Chargers, reaching the starter’s position in his second season, but not making much headway. In 2005, Brees signed a free agent deal with the Saints, and his talents truly began to shine, as he helped New Orleans bounce back from their 3-13 2004 season to a 10-6 record and a shot at the NFC Championship. By far his best season, however, was 2009, where Brees earned an NFL record with a 70.6% pass completion rate, managed to lead the Saints to a 13-0 season start, and helped the team reach Super Bowl XLIV. There, Brees faced off against Peyton Manning’s Colts, defeating them 31-17. Brees matched Tom Brady’s then-record of 32 completions, scoring two touchdowns. Brees remained a mainstay with the Saints until 2020, when he retired and began a spotty career as an NFL broadcast analyst.

Who is the greatest NFL quarterback of all time?

Most people consider Tom Brady the greatest NFL quarterback of all time. He has the longevity (22 seasons), stats, and wins (seven Super Bowls), making him the complete package in any G.O.A.T discussion. In 2022, Brady retired (briefly) as the NFL’s all-time leader in passing yards and touchdowns; he has also won more Super Bowl rings than any player or franchise in NFL history.

What quarterback holds the record for the most Super Bowl rings won?

Tom Brady’s seven Super Bowls are the most ever for a quarterback in the NFL. Brady also holds the record for most appearances in the Super Bowl with nine total. After that, Joe Montana is second on the list, with four Super Bowl rings. Only 12 quarterbacks in NFL history have started and won two or more Super Bowls.

What NFL quarterback has thrown the most touchdown passes?

Pages Related to Top 6 Best NFL Quarterbacks of All Time