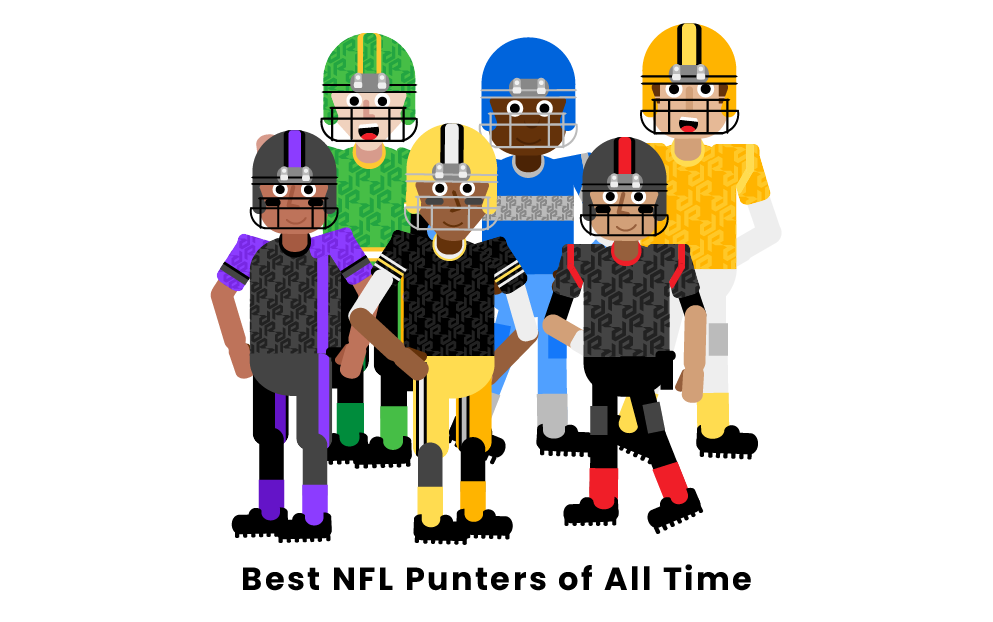 Football is a game dominated by breathtaking displays of athleticism and strength, but there’s more to it than touchdown bombs and big hits. After all, it’s called football for a reason, and half of that reason is the punters. Tasked with booting the ball as far downfield as possible, the game's all-time great punters combined great power with striking consistency. Below are the six best punters of all time.

Who are the best NFL punters of all time?

When most football fans think of punting, they think of Ray Guy. Easily the most talented punter of the 20th century, Guy led the league in yards per punt three times. As a member of the Raiders, Guy won three Super Bowls and was named a Pro Bowler seven times. He has an award named after him, the Ray Guy Award, which is given to the best college punter every year. Guy was well-known for his booming punts, which would soar into the air and regularly leave opponents in less-than-ideal offensive territory. In 2014, he made history as the first player to ever be inducted into the Pro Football Hall of Fame exclusively as a punter.

If you’re looking for longevity in the punter position, Lechler embodies that better than anyone. He played 18 seasons in the NFL and was named an All-Pro nine times, the most ever by a punter. He also made seven Pro Bowls and is second all-time in career punts (1,444). In addition, Lechler is the all-time leader in yards per punt at a whopping 47.6 yards per boot. He was named AFC Special Team Player of the Week four times and twice had the longest punt of a single season.

Sammy Baugh was one of the most versatile and unique players in NFL history. While he makes this list as a punter, Baugh was also a quarterback and running back during his career. He led the Washington Redskins to two titles as the man under center and led the league in passing yards four times. As a punter, he led the league in yards per punt five different times and also led the league in total punt yards for the 1943 season. Baugh had incredible power but was not as consistent as some of the other punters on this list, recording boots up to 85 yards. In 1963 he was inducted into the Pro Football Hall of Fame.

Yale Lary was another player on this list who played multiple positions. He recorded 50 interceptions in his time as a defensive back, but he was no slouch on special teams either. He led the league in yards per punt three times and also led the league in total punts in 1960, when he had 64. He was a nine-time Pro Bowl selection during his career and won three championships, all with the Detroit Lions. At the time of his retirement, Lary’s 44.3 yards per punt average was second only to Baugh. Lary was inducted into the Pro Football Hall of Fame in 1979.

Jerrel Wilson may have been a punter, but you wouldn’t know it by his physique. Standing at 6’2” and 220 lbs during his playing days, Wilson possessed great power. He led the league in yards per punt five times, including three-straight seasons from 1971-1973. He was a Pro Bowler three times and won two championships with the Chiefs, one in the AFL and one in the NFL, after the leagues merged. He paced the league in total punting yards twice, and he was named a member of the 1970s Hall of Fame team.

Although Shane Lechler’s consistency for so many years is impressive, there’s one player on this list who played even longer. Sean Landeta punted for 21 seasons in the NFL, and although he was not completely healthy for all of them, he still put up some monster numbers. He is fourth all-time in punting yards (60,707) and third all-time in total punts (1401). Landeta’s consistency was remarkable, as the only season when he finished averaging less than 42 yards per punt was 1988 when he was injured for most of the year. He also won two Super Bowls with the New York Giants.

Reggie Roby was a record-setting punter for the Miami Dolphins, among other teams. During his 16-year NFL career, Roby also played for the Redskins, Buccaneers, Oilers, and 49ers. Before being picked up by Miami for the 1983 season, Roby kicked at the University of Iowa, earning the team a Big Ten co-championship and setting a school record for average kick length. In the NFL, he led the league in net yards per punt in 1984 and 1986 and led in gross yards per punt in 1991. He was selected to three Pro Bowls and set a Pro Bowl record for kicking 10 punts in the 1985 edition. Roby was selected to the NFL’s 1980s All-Decade team and ended his career with 992 punts for 42,951 yards.

Johnny Hekker is arguably the best punter currently playing in the NFL. In 2012, he was signed as an undrafted free agent to the Louis Rams (now known as the Los Angeles Rams). From then until 2021, Hekker punted phenomenally for the Rams, being selected for the Pro Bowl and for the All-Pro First Team four times each. In 2022, he was released and then signed an impressive $7.6 million contract with the Carolina Panthers. Overall, Hekker has an astonishing average of 46.9 punting yards and has even more accomplishments likely to come as he continues his NFL career.

Who is the best NFL punter of all time?

The best NFL punter of all time is Ray Guy. Guy’s ability to boom punts sky-high was truly remarkable and earned him a reputation around the league. His seven Pro Bowl nominations are tied for the most ever by a punter, and his name is synonymous with punting. The Ray Guy Award is given each year to the best college punter as a nod to the greatest punter ever, which only stands to further build upon his legacy as the greatest punter pro football has ever seen.

What NFL punter has the most Pro Bowl selection all time?

What NFL punter has the most All-Pro selections all time?

Shane Lechler has the most All-Pro selections of all time, with nine. Lechler played for 18 seasons and was an All-Pro for half of them, a testament to his consistency and longevity as one of the game’s best punters. He was also a Pro Bowl selection seven times and is the all-time leader in yards per punt (47.6).

Pages Related to Top 6 Best NFL Punters of All Time