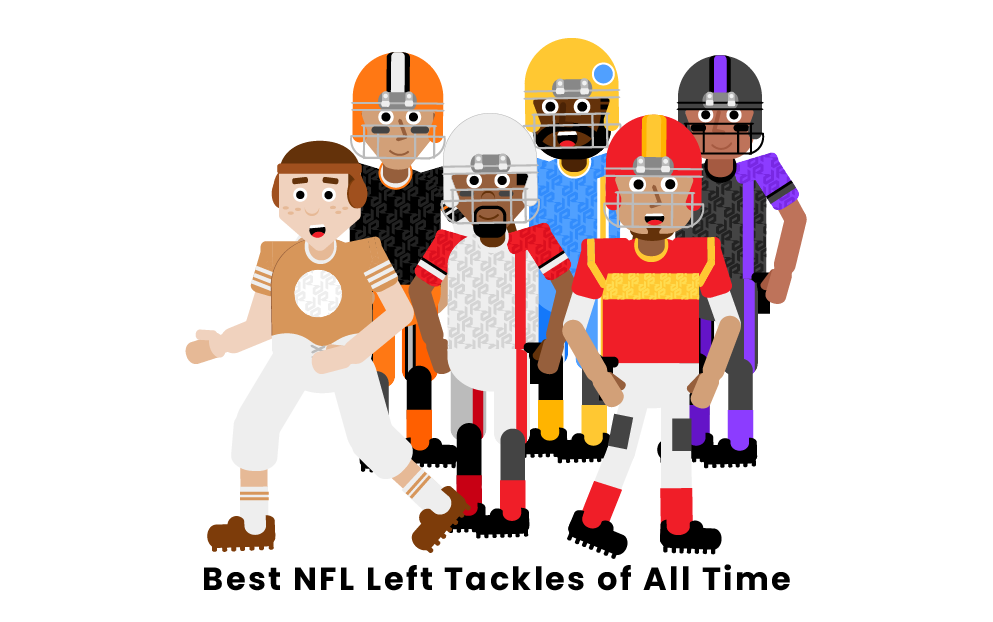 The left tackle is one of football’s most valuable positions. With most quarterbacks tending to be right-handed, the left tackle has to protect their “blind side” so that their blind spot can be protected from pass rushers. For this reason, left tackles are often the largest player on the field in height and weight. Read on to learn about the top six best left tackles in NFL history.

Who are the best NFL left tackles of all time?

Jonathan Ogden was the best left tackle in NFL history. Ogden was a massive tackle selected fourth overall in the 1996 NFL Draft. Standing at 6’9” and 345 lbs, he is remembered as one of the NFL’s largest players to make the Hall of Fame. Although he started his career out as a left guard, he quickly became a left tackle in year two. Ogden spent his entire 12-year career as a Baltimore Raven, not too far from Washington D.C., where he went to high school. The pinnacle of Ogden’s career came in 2000 when he helped the Ravens win Super Bowl XXXV.

Anthony Muñoz was selected third overall in the 1980 NFL Draft to play left tackle for the Cincinnati Bengals, and, for 13 consecutive seasons, he played the position at arguably a higher level than anyone. Between 1981 and 1991, Muñoz was selected either first-team or second-team All-Pro for eleven straight seasons. Muñoz protected the blind side for quarterbacks Ken O’Brien and Boomer Esiason in each of their MVP seasons, in the years 1981 and 1988, respectively. Muñoz played his entire career with the Bengals and, up until 2021, was a part of Cincinnati’s only two AFC champion teams.

Walter Jones was the sixth overall pick in the 1997 NFL Draft. He went on to have a dominant 12-year career with the Seattle Seahawks. Although Jones is remembered as a great player in Seattle, it took five years to see his first All-Pro selection in 2001. Jones made his second Pro Bowl in 2001 and made the All-Star game in each of his last eight seasons. Perhaps Jones’s best season came in 2005 when the Seahawks went to the Super Bowl. Jones’s run blocking helped eventual MVP running back Shaun Alexander rush for 1,880 yards.

Jim Parker was selected 8th overall by the Baltimore Colts in the 1957 NFL Draft. He was a force on the Colts' offensive line for eleven years. Although for the first six years he played left tackle, he eventually played a few years at left guard and also one as a right tackle. The position did not matter much, as Parker was always successful wherever he played. His eight consecutive All-Pros are second all-time for consecutive All-Pro selections and tied for fifth all-time on the total All-Pros list. Parker even got to be a part of two NFL championship teams in 1958 and 1959.

Joe Thomas was selected third overall in the 2007 NFL Draft by the Cleveland Browns. He immediately hit the ground running, finishing second in the 2007 Offensive Rookie of the Year vote. Offensive tackles rarely garner enough votes to finish that high for such an award. During a period when the Browns weren’t winning very much, Thomas was always a highlight for the fans. In his eleven-year career, Thomas made the Pro Bowl in every season but his last. Thomas was selected second-team All-Pro in his second year before making first-team each of the next six seasons.

As a member of the St. Louis Rams, Orlando Pace became a model for taller tackles in the NFL, standing at 6’7” and 325 lbs. He was selected number one overall in the 1997 NFL Draft. Pace’s dominance at left tackle helped establish an offense known as “The Greatest Show on Turf” in St. Louis. In 1999, Pace also paved the way for quarterback Kurt Warner’s MVP performance while running back Marshall Faulk dominated on the ground with Pace’s run blocking. The Rams would go on to win Super Bowl XXXIV, and Pace eventually made the Hall of Fame in 2016.

Art Shell was a left tackle for the Oakland Raiders (originally Los Angeles Raiders) for an astounding 15 seasons. He played a total of 207 games, including 23 postseason games. Shell was selected to eight Pro Bowls and was a two-time Super Bowl champion with the Raiders in 1977 and 1981. He was known for being exceptionally tough and only missed five games his whole career due to injury.

Roosevelt “Rosey” Brown played left tackle for the New York Giants from 1953 to 1965. Holding the starting position for all 13 seasons he played, Brown made a name for himself as a pass blocker. During his accomplished career, Brown also helped the Giants win the 1956 NFL Championship and was selected for the Pro Bowl nine times. He was included in the Giant’s inaugural 2010 Ring of Honor class.

At a massive 6’5” and 320 lbs, Willie Roaf physically overwhelmed most linebackers and defensive ends who opposed him in the NFL. He played for the Saints from 1993 to 2001 and for the Chiefs from 2002 to 2005. Roaf shone early in his career, making the PFWA All-Rookie Team after his first season in 1993. The following season he was selected to the Pro Bowl, an honor he would enjoy ten more times.

Who is the best NFL left tackle of all time?

Many would argue that Jonathan Ogden is the greatest NFL left tackle of all time. Not only did he manage a great resumè with multiple All-Pros, Pro Bowls, and a Super Bowl win, but he managed to dominate at a height and weight that is rare for NFL offensive tackles. By 1996, when he was drafted, it was no secret that players in the NFL were getting bigger, but Ogden became the first dominant massive tackle.

What NFL left tackle has the most Pro Bowl selections of all time?

Anthony Muñoz and Willie Roaf are tied for the most Pro Bowl selections with 11 each. Muñoz amazingly had all 11 happen consecutively. In fact, 11 of his 13 career seasons ended in a Pro Bowl appearance. Willie Roaf played from 1993 to 2005 for the New Orleans Saints and Kansas City Chiefs. He had two lengthy Pro Bowl streaks. One seven-year streak with the Saints and later one four-year streak with the Chiefs.

What NFL left tackle has the most All-Pro selections of all time?

Anthony Muñoz holds the record for most All-Pro selections all-time amongst left tackles. As a nine-time All-Pro for the Cincinnati Bengals, Muñoz sits tied for third among all players for most All-Pros ever. He is tied for first all-time amongst tackles: right-tackle Ron Mix had nine All-Pro selections as a part of the San Diego Chargers. Anthony Muñoz’s nine All-Pros are even more impressive when you consider that he did them in nine consecutive NFL seasons.