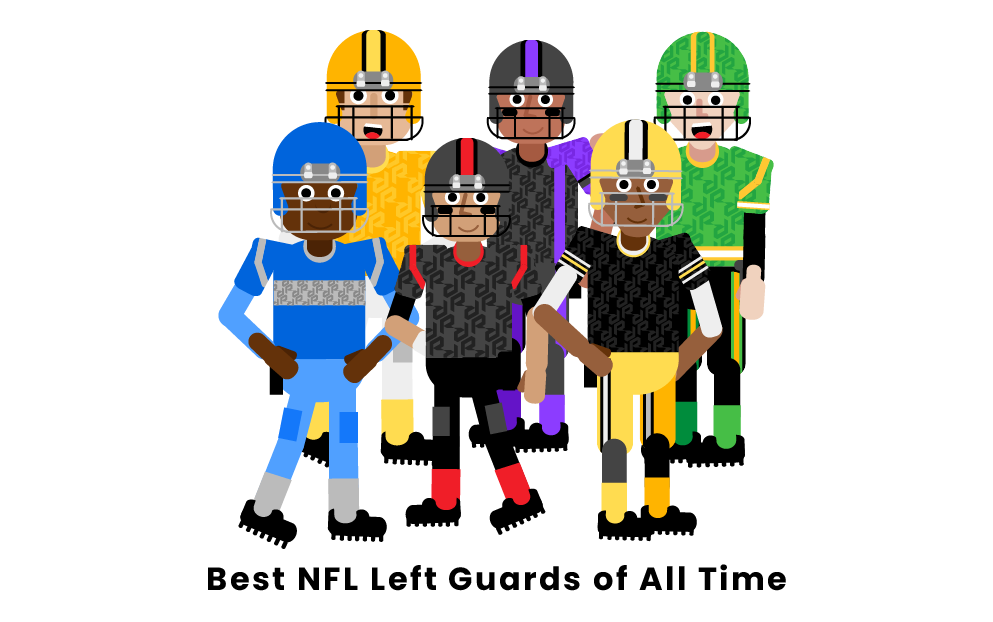 One of the most vital and difficult roles in football is offensive guard, the two players on the offensive line who stand on either side of the center. As key members of the offensive line, left and right guards are the quarterback’s first line of defense, protecting him from pass rushers while he looks to make a play. Read on to learn about the top six best NFL left guards of all time, who made the most in their position and accomplished great things during their NFL careers.

Who are the best NFL left guards of all time?

At 6 feet, 2 inches tall and 265 pounds, John Hannah, who became affectionately known as “Hog,” was a natural choice for the left guard position when he was first drafted in 1973 by the New England Patriots, the only team he would ever play for in his long NFL career. A first-round pick, Hannah played for New England from 1973 to 1985, starting for 13 games straight in his first season before being sidelined in the last game by a leg injury.

When he returned to playing the following year, Hannah’s talent as a guard exploded. For the next 12 years, he performed at the highest level, earning ten All-Pro distinctions and winning the NFL Players Association's Offensive Lineman of the Year Award four years in a row. Hannah was also named to nine Pro Bowls in his career, playing in each one except the last, which he missed due to injury. Hannah only missed 13 games in his entire career, helped the Patriots to seven winning seasons, and amassed a cumulative record of 100 wins and 91 losses.

Hannah helped the Patriots win the 1985 AFC Championship in his final season, leading them to an appearance in Super Bowl XX, which New England lost to the Chicago Bears. Though he never won a Super Bowl, John Hannah nonetheless made a name for himself as one of the best NFL left guards of all time, earning his place in the Pro Football Hall of Fame in 1991.

Larry Allen first proved his worth as a lineman to NFL scouts at a young age through his skill on the offensive lines of his two college teams, the Butte Junior College Roadrunners and the Sonoma State Cossacks (later renamed the Seawolves). Allen’s talents led him to become a second-round pick in 1994, and he was selected by the Dallas Cowboys. In 12 seasons with the Cowboys, Allen proved an incredibly versatile player and played every position on the offensive line except for center during his time in Dallas. Taller by an inch than John Hannah, Allen’s other advantage on the field was his 325-pound weight and the strength that came with it. Allen was named All-Pro in each of his first seven seasons, and he was named to the Pro Bowl in each of his first 11 seasons. In 2006, Allen was traded to the San Francisco 49ers, with whom he played for two years before retiring.

In all, Allen played in 203 games in his NFL career and participated in two NFC Championships. He also earned himself a Super Bowl Ring as a right guard for Dallas, helping them defeat the Pittsburgh Steelers in Super Bowl XXX. Allen has been named to two NFL All-Decade Teams (the 1990s and 2000s teams), making him one of the few players ever to be named to two separate All-Decade teams. He earned the title of NFL Offensive Lineman of the Year in 1997, as well as NFC Offensive Lineman of the Year in 1996 and 1997, and he was inducted into the Pro Football Hall of Fame in 2013.

Selected by the Houston Oilers in 1983, Bruce Matthews made himself an invaluable member of the team throughout his 19-year career and through the franchise’s relocation to Tennessee and renaming to the Tennessee Titans. In his 296 games with Houston/Tennessee, Matthews started in 292 and in all 15 of his team’s playoff games. His skill on the offensive line earned him this valuable starting position in only his second game with Houston, and, similarly to Larry Allen, Matthews would go on to play every position on his offensive line during his career, including 87 starts as a center. As a guard, Matthews started 99 times on the left side and 67 on the right.

Despite his team suffering poor seasons early in his career, Matthews continued to excel, helping to solidify the Oilers/Titans line. In 1987, the Oilers finally reached the playoffs, and that season was the first of seven straight trips to the postseason for the franchise. Matthews helped the Titans reach two more playoffs after their move to Tennessee, among them an AFC Championship win in 1999, which sent them to Super Bowl XXXIV. Unfortunately, the Titans lost the Super Bowl to the St. Louis Rams. Nevertheless, Bruce Matthews stood tall as one of the team’s best players, cementing his legacy as an offensive guard by being named to 14 consecutive Pro Bowls, a record tied only by four other players in the league: Merlin Olsen, Tony Gonzalez, Peyton Manning, and Tom Brady. Matthews was named first-team All-Pro nine times and All-AFC 12 times, in addition to being a part of the NFL All-Decade Team of the 1990s. He was inducted into the Pro Football Hall of Fame in 2007, six years after his retirement in 2001.

Another famous left guard, Tom Mack was one of the most-watched players in the NFL during his 13 years with the Los Angeles Rams. Drafted in 1966, Mack played in 184 games, never missing a single one, which placed him in third for consecutive games played among Rams’ players, after Jack Youngblood and Merlin Olsen. Mack helped give the Rams 12 winning seasons in his 13 years and earned himself a game record of 129 wins, 48 losses, and seven ties. He also helped the Rams win eight NFC Division Titles and helped them reach four NFC Championships. At 6’3” and 250 pounds, Mack was a formidable left guard, and his prowess earned him 11 invitations to the Pro Bowl, the first being offered in his second season. After that first appearance, Mack was only kept out of the Pro Bowl once. Between 1969 and 1978, Mack was named All-Pro and All-NFC nine times in ten years. Tom Mack retired in 1978 and was inducted into the Pro Football Hall of Fame in 1999.

In 1967, when the American Football League and the National Football League held their first-ever combined draft, Gene Upshaw was the first-round choice of the Oakland Raiders. At 6’5” and 255 pounds, Upshaw had proven himself a great lineman while at Texas A&I, playing center, tackle, and defensive end.

During rookie training camp, Upshaw’s coaches decided to try him out as a left guard, and his performance at the position led him to be named a starter. He would go on to retain that starting position for 15 seasons, starting in 207 straight games and never missing one until 1981, when an injury forced him to sit out for a week. However, Upshaw returned the week after his injury, finishing what would prove to be his last season with ten additional games. He was forced to sit out the 1982 season due to a summertime injury and retired that year. Nevertheless, his record in his 15 seasons was stellar, consisting of 307 regular, preseason, and postseason games. In the postseason, Upshaw played in three AFL Championships and seven AFC Championships, and joined the Raiders in three Super Bowls, including the second-ever Super Bowl, Super Bowl II, in 1968. The Raiders lost Super Bowl II to the Green Bay Packers but emerged victorious in both Super Bowl XI and Super Bowl XV, ending Upshaw’s career with a Super Bowl victory.

In addition to these accolades, Upshaw was an All-League or All-Conference player in 11 consecutive years and was invited to seven Pro Bowls. After his retirement in 1981, Upshaw was named to the Pro Football Hall of Fame in 1987, and in 2004, the NCAA created the Gene Upshaw Division II Lineman of the Year, which is given out annually to college football linemen. Upshaw passed away at age 63 in August of 2008, shortly after receiving a diagnosis of pancreatic cancer. In honor of his death, NFL players wore a special patch with Upshaw’s initials and jersey number during the 2008 season.

In the 1982 NFL Draft, Mike Munchak was selected as the eighth overall player and the first offensive lineman of the draft, going to the Houston Oilers, where he was named to the left guard spot. He quickly dominated as a lineman and was soon joined on the team by fellow lineman Bruce Matthews, working with him to form an imposing offensive line for the Oilers. During his career, Munchak was named to seven All-AFC teams and nine Pro Bowls. As Munchak improved, so did the Oilers, and in 1987, the team kicked off a seven-season streak of reaching the playoffs and won the AFC Central Divisional Title in 1991 and 1993. In 1988, Munchak helped the Oilers’ offensive line allow only 24 quarterback sacks in the entire season, the third-fewest sacks allowed in the NFL. The Oilers improved upon this feat in 1991, coming in second in the entire league for fewest sacks allowed.

During Munchak’s tenure, Houston was first in the NFL for total offense in 1990, as well as for passing offense in both 1990 and 1991. The team also finished second in total points scored in 1990. Over the course of his career, Munchak played in 159 games. He was named to the Pro Football Hall of Fame in 2001. After his retirement, Munchak became an assistant coach for the Oilers’ offense, joining the team in their move to Tennessee and their renaming as the Tennessee Titans. Munchak was later promoted to Offensive Line Coach for the Titans in 1997 and then Head Coach in 2011. He was relieved of his head coaching position in 2014, after which he was offensive line coach for the Pittsburgh Steelers and the Denver Broncos.

Who is the best NFL left guard of all time?

New England Patriots player John Hannah is often considered the best NFL left guard of all time. Though he never won a Super Bowl, Hannah (nicknamed “Hog” by Patriots’ fans) only missed seven starts and 13 games in his career and managed to gain ten All-Pro selections in his time as a left guard. He also won the NFL Players Association's Offensive Lineman of the Year Award four years in a row and was named to nine Pro Bowls. While his accolades are not as numerous as some other left guards, Hannah’s sheer talent and skill make him one of the best overall left guards in NFL history.

What NFL left guard has the most Pro Bowl selection all time?

Former Houston Oilers/Tennessee Titans left guard Bruce Matthews has the most Pro Bowl selections of any left guard in NFL history. During his 19-year career with Houston/Tennessee, Matthews appeared in 14 consecutive Pro Bowls, tying the Pro Bowl record of Merlin Olsen. Since then, Olsen and Matthews’ Pro Bowl record has been tied by three other players: Tony Gonzalez, Peyton Manning, and Tom Brady.

What NFL left guard has the most All-Pro selections all time?