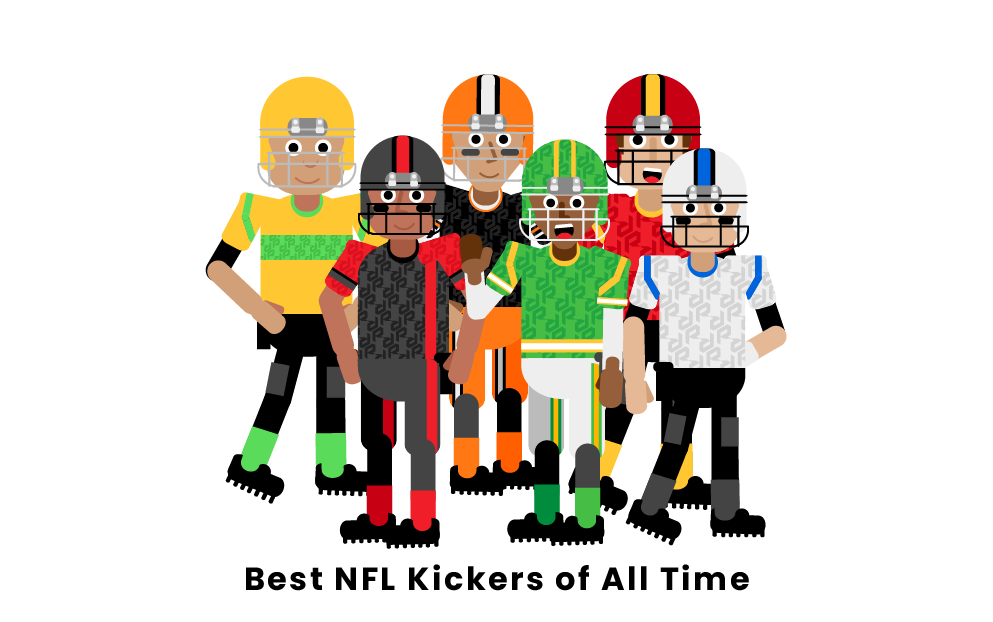 While an often overlooked aspect of the National Football League, kicking plays an integral role in the sport. With so many games being decided by last-minute field goals, a good kicker can make all the difference between a crucial win and a heartbreaking loss. Listed below are the six greatest NFL kickers of all time.

Who are the best NFL kickers of all time?

Justin Tucker is arguably the greatest NFL kicker of all time. He went from being an undrafted free agent to a placekicker for the Baltimore Ravens in 2012. Since starting his career, Tucker boasts a career made-field-goal rate of 91.1% on 358 attempts, as well as a 99% made extra point rate on 386 kicks. Not only is he deadly accurate and clutch, winning a Super Bowl in his rookie season, Tucker has also accumulated countless honors to solidify his legacy. These accolades included five All-Pro and Pro Bowl team selections and being a part of the Pro Football Hall of Fame All-2010s team.

With nicknames like "Mr. Clutch," "Automatic Adam," and "Iceman," it's no wonder that Adam Vinatieri is widely believed to be one of the greatest to ever kick in the NFL. The first-ever kicker to win four Super Bowls, along with making the game-winning kick in two of them (Super Bowl XXVI and Super Bowl XXXVIII). He grew a reputation for making kicks when they mattered most, no matter the circumstances. With a career starting in 1996, Vinatieri had an impressive 84.7% FG rate on 715 attempts and 97.3% made extra-point percentage.

Lou Groza, a Hall of Fame talent, was one of the most unique players ever to play the sport. He not only performed kicking duties during his career for the Cleveland Browns from 1946-1967 but played left tackle as well. While having a made field goal percentage of 58.9%, his 97.2% made extra-point rate helped him earn nine Pro Bowl selections along with four All-Pro team selections during his illustrious career. Groza was inducted into the Hall of Fame as part of the 1974 class as both a kicker and a tackle and ended with 1,608 total career points.

Morten Andersen was an NFL kicker from 1982 to 2007 and played for five teams during his tenure, the New Orleans Saints, Atlanta Falcons, New York Giants, Kansas City Chiefs, and Minnesota Vikings. After retiring, Anderson was inducted into the Hall of Fame as a part of the 2017 class, which is not surprising as he holds the records for kickers in career points (2,544), most field goals (565), and games played (382). In addition to all of these records, he also maintained a 79.7% made field goal percentage and a 98.8 percent made extra point rate for his career.

After being drafted in the fourth round of the 2006 NFL Draft by the New England Patriots, Steven Gostkowski quickly established himself as one of the best and most accurate kickers. He was named to the 2006 All-Rookie team and eventually the Pro Football Hall of Fame All-2010s team. Gostkowski has an impressive 98.2% made extra point rate and an equally spectacular 86.3% made field goal percentage. He holds the records for most and second-most made extra points in a season, with 74 in 2007 and 66 in 2012, and won three Super Bowls during his time with the Patriots organization. As of 2020, he now plays with the Baltimore Ravens

George Blanda was a dual-position athlete during his time in the NFL but excelled especially as a kicker. He debuted as a quarterback during the 1952 season, and it would not be until the 1963 season that he would begin kicking. Over the 26 seasons he played, Blanda amassed a staggering total of 26,920 yards passing along with an impressive 52.4% field goal percentage and 98.3% made extra-point rate. Blanda made the All-Time AFL Team, four Pro-Bowls, and was named the 1974 Walter Payton Man of the Year. After his fantastic career, Blanda was justifiably inducted into the Pro Football Hall of Fame 1981 class.

While playing for five different teams, Gary Anderson made a name as one of the greatest kickers the NFL had ever seen. He was first drafted to the Pittsburgh Steelers in 1982. During 12 very successful years with that franchise, Anderson was selected for four Pro Bowls, was selected for the First Team for separate All-Pro games. From 1995-2004, he switched between four other teams before retiring. Despite these chaotic shifts, Gary Anderson retired with an impressive 80.1 Field Goal Percentage, 99.2 PAT Percentage, and a career total points of 2,434 points over 353 games.

Jason Hanson was a talented placekicker who spent his entire 21-year NFL career with the Detroit Lions. Hanson kicked in college for Washington State, and then he was picked in the second round of the 1992 NFL Draft by Detroit. In addition to several kicking and scoring records, Hanson holds the NFL record for most seasons (21) and most games (327) played with a single team. He made 495 out of the 601 field goals he attempted, for an impressive completion rate of 82.4%. After his retirement, Hanson was selected to the Detroit Lions 75th Anniversary Team and All-Time Team.

Who is the greatest NFL kicker of all time?

There have been many great kickers during the National Football League's history, but the title of best of all time goes to Justin Tucker. His stunning percentages of 91.1% for made field goals and 99% made extra points speak for themselves, showing that he is the most accurate kicker ever. His five All-Pro and Pro Bowl selections and NFL record for longest made field goal only further solidify his case as the greatest kicker of all time. It is almost guaranteed that Tucker will be inducted into the Pro Football Hall of Fame following his retirement.

Has a kicker ever won MVP?

Mark Moseley is the only kicker in the history of the National Football League to win the Most Valuable Player honor. During a lockout-shortened season, Moseley went an impressive 20-21 for field goals, breaking the then-standing record of consecutive made field goals with 20, and made numerous game-winning kicks that helped make his case for MVP.

Who holds the record for the longest field goal in NFL history?

The record for the longest field goal in NFL history is held by Justin Tucker, after he made a 66-yard field goal in the 2021 season. For years, the long-standing record of 64 yards by Matt Prater was the record for longest-ever made field goal, a record that stood since 2013. However, that changed in Week 2 of the 2021 NFL season when Ravens’ kicker Justin Tucker broke that record by two yards and in dramatic fashion after he successfully made a 66-yard field goal to beat the Detroit Lions as time expired.

Pages Related to Top 6 Best NFL Kickers of All Time