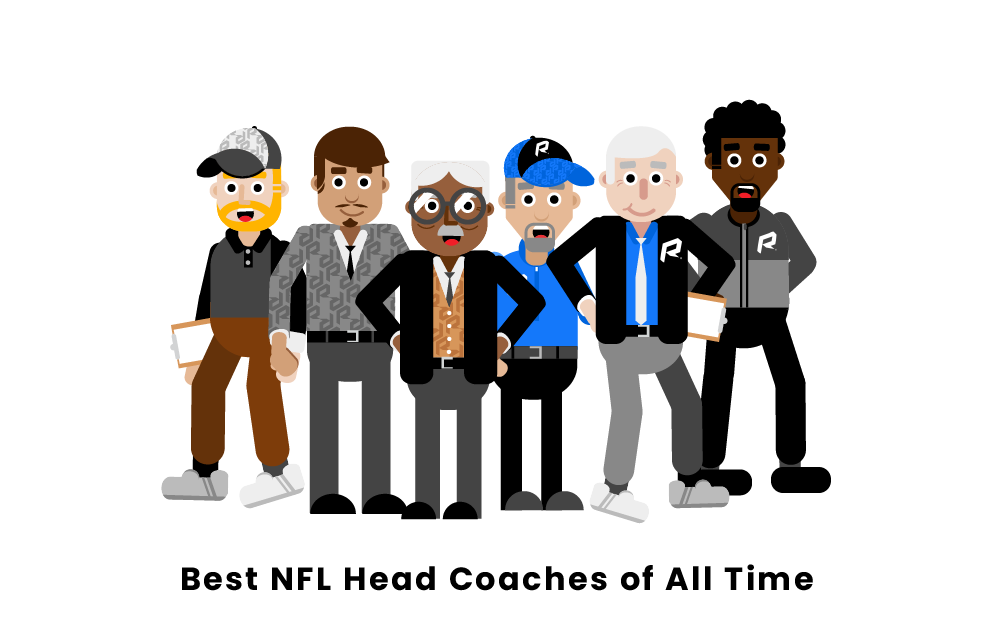 Every successful NFL team starts with a high-quality coach. Some NFL coaches have risen above the rest, and their teams have immeasurably benefitted from having them on the sideline. Read on to learn about the top six best NFL coaches of all time.

Who Are The Best NFL Coaches of All Time?

Bill Belichick is most famous for his success during his 20+ seasons as head coach of the New England Patriots, but he has been around the NFL for even longer. Before finding a home as the New England head coach, he was involved with the Baltimore Colts, Detroit Lions, Denver Broncos, New York Giants, Cleveland Browns, and New York Jets. Belichick has won the Coach of the Year Award three times throughout his career. Aside from the accolades, Belichick is known for his serious, no funny business coaching style and navy blue Patriots hoodie that he wears on the sidelines.

Vince Lombardi is famous for his incredible head coaching career with the Green Bay Packers from 1959 to 1967. He started off as the offensive coordinator for the New York Giants in 1954 and finished his career as the head coach of the Washington Redskins for the 1969-1970 season. He is best known for his dominant run with the Packers, where he dominated with quarterback Bart Starr. He had nine wins and just one loss in the playoffs as a coach. He passed away in 1970, but his legacy and imprint on football will last forever, as the Super Bowl Trophy is

named after him. He will always be remembered for his determination to win, and his legacy is commemorated with the Lombardi Trophy, crowned to the Super Bowl champion.

Don Shula coached NFL football for 33 years, including years with the Baltimore Colts but most famously as the head coach of the Miami Dolphins. Shula famously led the Dolphins to the only perfect season in NFL history, ending with a Super Bowl victory in 1972. His career ended with 328 wins, 173 losses, and six ties. Don Shula was admitted into the Pro Football Hall of Fame in 1997. Shula is first in most games coached and most consecutive seasons coached, with 33.

Bill Walsh began coaching football at the high school level but quickly climbed up the ranks to the NFL. Before becoming the head coach of the 49ers, Walsh was the quarterbacks coach for the San Diego Chargers, where he turned Dan Fouts into a Hall of Fame quarterback. Following the Chargers, Walsh spent two years at Stanford before taking over as head coach of the 49ers in 1979. Walsh brought San Francisco three Super Bowls, three NFC titles, and a 102-wins during his time there. Bill Walsh is known for creating the “West Coast Offense,” an offense oriented around short, slant passes to get mismatches in coverage and space for receivers to run after the catch.

George Halas is one of the most historic and fascinating figures in football history. He was involved with the Bears from the moment they were created in 1920 until his death in 1983. Halas coached the Bears to two undefeated regular seasons. He also had 324 total wins, which was the most amongst coaches until Don Shula broke the record. Halas is known for perfecting the “T-Formation” by adding a man in motion. After this offense led to a 73-0 win over the Redskins, the T-Formation took the league by storm. The NFL would not be what it is today without Papa Bear.

Paul Brown was a celebrity figure in Ohio long before he began coaching the Browns. He won several high school state championships and coached Ohio State University to a national championship in 1942. Brown began coaching Cleveland’s professional team, the Browns, in the All-America Football Conference before they had a spot in the NFL. Largely thanks to Brown’s success as a coach, the team was invited to the NFL. The Browns were named after Paul Brown, and he led them to a championship victory in the team’s first season. Brown is also famous for the “Brown Coaching Tree” because several of his former players and assistants went on to have illustrious careers as a coach.

Joe Gibbs is a legendary NFC coach that won three Super Bowls with the Washington Redskins (now the Washington Commanders) in the 1980s and early 1990s. He was voted Coach of the Year by the Associated Press twice in his career. Gibbs started his coaching career at various college programs around the country, mostly serving as a positional assistant coach. He then moved to the NFL, where he was an assistant with the St. Louis Cardinals and eventually the offensive coordinator for the Tampa Bay Buccaneers, and later the San Diego Chargers. Gibbs was known for being a trailblazer in terms of promoting African-American quarterbacks, which was a controversial topic during the time he was coaching. He was inducted into the Pro Football Hall of Fame in 1996, and later went on to own a successful motorsport racing team.

Tom Landry was a highly successful head coach that spent his entire 29-year head coaching career with the Dallas Cowboys. He served as the Cowboys head coach from 1960 to 1988, and was a large part of their emergence as “America’s Team.” Landry led the Cowboys to five Super Bowl appearances, two of which they won. Prior to becoming the head coach of the Cowboys, he served as a defensive coordinator for the New York Giants. With the Giants, he is credited with pioneering the 4-3 defense, which is one of the most popular defensive schemes in the sport today. Landry was inducted into the Pro Football Hall of Fame in 1990, two years after his final season as a head coach.

A legendary coach for the Pittsburgh Steelers, Chuck Noll came astonishingly close to some of the records set by the highest-ranking coaches on our list, most notably through his four Super Bowl victories. Noll’s accomplishment is even more impressive because when he first inherited the Pittsburgh squad in 1969, the Steelers hadn’t won a championship of any sort in four decades, and their first season under him ended in a crushing 1-13 record. The fact that Noll went on to lead them to four Super Bowl victories showcases the overwhelming effectiveness of his coaching style, as does his ultimate 209-156-1 record, which included 16 wins and only eight losses in the postseason. In the final 15 of his 20 seasons with Pittsburgh (he departed in 1991), Noll managed a winning record in every one. Because of this, it’s no surprise that he was inducted into the Hall of Fame in 1993.

Who is the best NFL head coach of all time?

Bill Belichick is widely regarded as the best NFL head coach of all time because of his consistent regular season and postseason success. As the head coach of the Patriots, the team has only missed the playoffs four times. His 17 divisional titles are the most by any coach in NFL history. Belichick also has 11 more playoff wins than the next closest coach. Belichick is the greatest coach the game of football has ever seen.

What NFL head coach has the most Super Bowl Rings of all time?

What NFL head coach has won the most games of all time?

Don Shula currently holds the lead for the coach with the most regular-season wins of all time, with 328 wins. His wins come from his time with the Baltimore Colts and Miami Dolphins. He is also the only coach to ever complete a perfect season, which Shula did in 1972 with the Miami Dolphins. Shula’s record is safe at the moment, but Bill Belichick is approaching with his 290 regular-season wins.