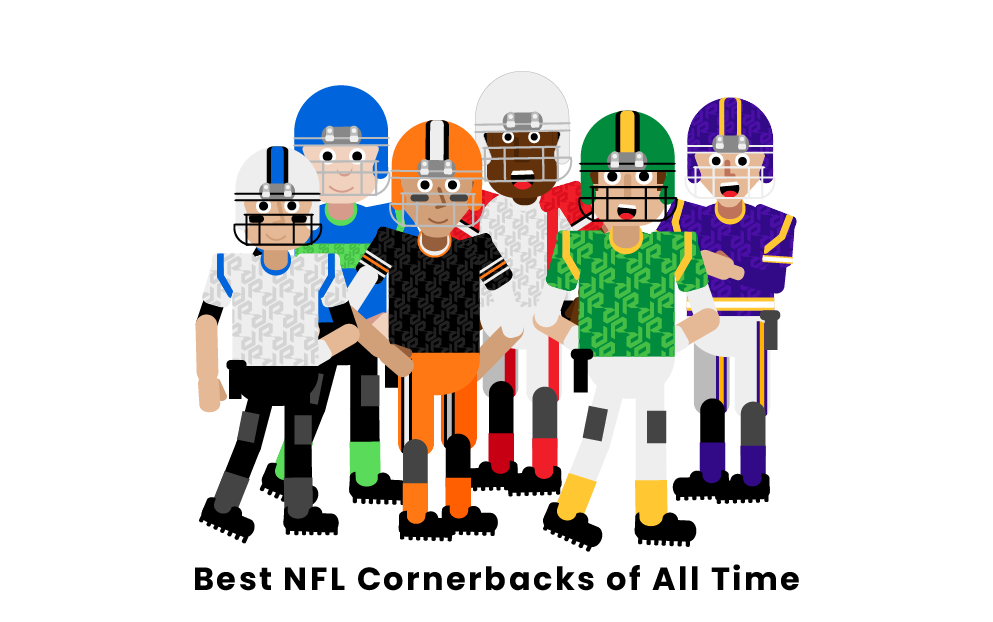 The cornerback position has long been one of the most valued positions in football. Due to the prominence of many dominant NFL quarterbacks, the corner position has risen in its ability to shut down the league’s most prolific passing attacks. In pass coverage, a select few have defined the position. Read on to learn about the six best NFL cornerbacks of all time.

Who are the best NFL cornerbacks of all time?

Deion Sanders was drafted fifth overall in the 1989 NFL Draft by the Atlanta Falcons. As a part of a high profile top five picks that also included three other NFL Hall of Famers in Troy Aikman, Barry Sanders, and Derrick Thomas, it’s impressive to say that Sanders may be the best of them all. In Sanders’ first career game, he returned a punt for a touchdown in front of a raucous crowd in Atlanta-Fulton County Stadium. He never looked back. Deion Sanders was the return touchdown king. He sits 2nd all-time on the non-offensive touchdowns list with 19 total.

Charles Woodson is the only defensive player in college football history to win the Heisman trophy. He did so with flair, returning a punt for a touchdown against rival Ohio State and making the Heisman pose in the endzone. The college phenom was drafted 4th overall by the Oakland Raiders and played eight dominant years with them before seven with the Packers and three more again with the Raiders. The Hall of Famer had 65 career interceptions, good for a tie for fifth on the all-time interception list. Woodson is also second all-time, with 11 career interceptions returned for touchdowns.

Ronnie Lott was one of the San Francisco 49ers’ best defensive players during their 1980s dynasty with quarterback Joe Montana. He spent ten years with the 49ers and won four championships in 1981, 1984, 1988, and 1989. Lott was named First-Team or Second-Team All-Pro for six straight years and was ultimately inducted into the Pro Football Hall of Fame in 2000. In two of the 49ers Super Bowl runs, Lott had a key interception returned for a touchdown. Lott had five such touchdowns, along with those two in the playoffs. He also had 63 career interceptions.

Rod Woodson played 17 years in the NFL and never lost his step. The Hall of Famer was an All-Pro in his third year as a cornerback and an All-Pro as a safety in his second to last season 13 years later. Woodson had 71 career interceptions, which is good for third on the all-time list, only behind Emlen Tunnell and Paul Krause. Woodson spent most of his career with the Pittsburgh Steelers. Although Pittsburgh went to the playoffs often, Woodson didn’t win a Super Bowl until 2001, when he played safety for the rival Baltimore Ravens.

Darrelle Revis was a dominant man-to-man cornerback during his 11-year career, where he spent most of his time as a New York Jet. With the Jets, Revis had three straight All-Pro seasons from 2009-2011. That stretch helped the Jets make the AFC Championship Game in back-to-back seasons. During this time, Revis’ style of play became known as “Revis Island.” This was referring to the side of the field, or island, that receivers would be covered on by Revis. Revis held eight Pro Bowl wide receivers to under 35 yards receiving during his excellent 2009 season.

Mel Blount spent his entire 14-year career with the Pittsburgh Steelers. He played a big part in the Terry Bradshaw and Chuck Noll-led 1970s Steelers dynasty that went to and won four Super Bowl championships. During the 1975 NFL season, Blount was named Defensive Player of the Year by the Associated Press after intercepting 11 passes, something that has only happened seven times by any player in the Super Bowl era. Blount would go on to intercept another pass in a divisional playoff game against the Baltimore Colts. Pittsburgh would eventually win Super Bowl X that year against Dallas.

Champ Bailey was drafted seventh overall in the 1999 NFL Draft by the Washington Redskins (now the Commanders). In his rookie year, he started in every game, and became the youngest player in NFL history to accumulate three interceptions in one game. Bailey’s rookie year also included a pick-six, 19 passes defended, and a sack. In 2004, Bailey joined the Denver Broncos, and set another record when he achieved the longest non-scoring play in NFL history, an end zone interception he returned to the one-yard line. In 215 career games, Bailey earned 908 tackles (812 solo), 52 interceptions for 464 yards, four touchdowns, three sacks, six fumble recoveries, and 203 passes defended. Additionally, his 12 Pro Bowl elections set the record for most selections by a defensive back.

Darrell Green was drafted by the Washington Commanders with the 28th overall pick in the 1983 NFL Draft. He would spend his whole 20-year career in Washington D.C. Green is a part of the NFL 100th Anniversary All-Time Team, as well as the NFL 1990s All-Decade Team. He holds the record for most consecutive seasons with an interception, making interceptions in 19 straight seasons. Green finished his NFL career with two Super Bowls, 1,159 tackles, 54 interceptions, and six touchdowns.

Ty Law was one of the best defensive players of the late 1990s and early 2000s. He played most of his career with the New England Patriots, with whom he won three Super Bowls. He led the league in interceptions in 1998 and 2005, in pass deflections in 2003, and has the 24th most interceptions of all time. Throughout his career, Law made the Pro Bowl five times and was named First-Team All-Pro twice. He ended his 15-year NFL career with 838 tackles, 169 pass deflections, 53 interceptions, 7 touchdowns, and 5 sacks.

Who is the greatest NFL cornerback of all time?

Deion Sanders is believed by many to be the greatest cornerback of all time. On account of the fact that he scored a number of touchdowns on defense, special teams, and offense during his career, he is believed to be one of the most versatile and all-around exceptional players to ever exist. Sanders was a dominant man-to-man cornerback with the athleticism to provide game-breaking plays as a kick returner and every once in a while as a wide receiver.

Who holds the record for most interceptions as a cornerback in the NFL?

The record for most interceptions as a cornerback is held by Rod Woodson. Although Woodson played multiple years at the end of his career as a safety, he spent the majority of his time playing cornerback. Woodson is technically third all-time on the interceptions list with 71 total behind Paul Krause (79) and Emlen Tunnell (81). However, Krause and Tunnell both played safety throughout their careers, and therefore Woodson leads the all-time list among cornerbacks.

Which NFL cornerback holds the record for the most interceptions in a single season?

Pages Related to Top 6 Best NFL Cornerbacks of All Time