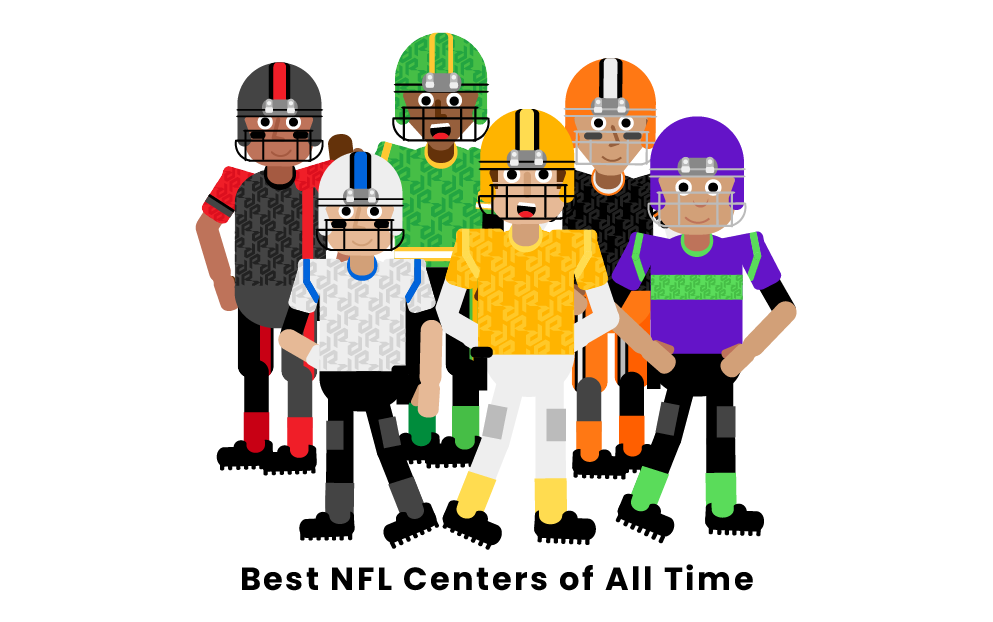 The center is critical to the chemistry of the offensive line. Centers are normally asked to make pre-snap signals to determine the opposing team’s pass rush strategy. Some of the greatest centers of all time excelled at this and paved the way for some of the NFL’s greatest offenses. Read on to learn about the top six best NFL centers of all time.

Who are the best NFL centers of all time?

Jim Otto played the entirety of his 15-year career with the Oakland Raiders at the beginning of the AFL’s growth as a league. For all but his last two years, Otto either made the Pro-Bowl or was an All-Pro. In fact, Otto was a first-team All-Pro in the AFL (and eventually NFL after the merger) for 11 straight years. However, because this streak began while the AFL was still independent, it doesn’t count towards the NFL record book. Otto would hold the record for most First-Team All-Pros amongst all players, with ten total when including the AFL, which puts him far ahead of Aaron Donald’s seven.

Mike Webster spent 15 of his 17 years in the NFL with the Pittsburgh Steelers. He helped block for Hall of Fame Steelers running back Franco Harris as Pittsburgh won four Super Bowls in the 1970s. Following Webster as a lead blocker, Harris had six consecutive 1000-yard rushing seasons. During this stretch, Webster started 150 straight games for the Steelers spanning over a decade, from 1976 to 1986. Webster was an All-Pro for six of those years. His lengthy career placed him on the all-time Hall of Fame teams for both the 1970s and the 1980s.

Jeff Saturday spent 13 of his 14 year NFL career as the center of the Indianapolis Colts. Saturday snapped the ball to Hall of Fame quarterback Peyton Manning during this entire period. Manning set passing records and won multiple MVPs with Saturday’s protection. In 2006, Saturday helped Manning and the Colts win the Super Bowl against the Chicago Bears. Saturday played for the Green Bay Packers in the last year of his career. Although he made the Pro Bowl for the NFC, and not Manning’s AFC, Saturday was allowed to play for the AFC and snap to Manning one last time.

Dwight Stephenson had an eight-year career that he spent entirely with the Miami Dolphins. For each of the last five seasons Stephenson played in the NFL, he was voted an All-Pro center. Stephenson was a pass protector for Dan Marino during his first few years in the NFL. One of these seasons, 1984, was Marino’s finest. Stephenson played a big part as Marino’s center during that 1984 MVP season. Marino threw for over 5000 yards in 1984 and was the only quarterback to do so for 24 years before Drew Brees did it in 2008 with New Orleans.

Jim Ringo played 11 years for the Green Bay Packers, followed by four more for the Philadelphia Eagles during the period that the NFL was still independent from the AFL. During his time as a Packer, Ringo was run blocking for a consistently good Vince Lombardi-coached rushing offense. Ringo was a Pro Bowler in every year from 1957 to 1965 and played center in each of the Packers’ NFL Championship appearances from the year 1960 to 1962. Although Ringo and Green Bay couldn’t win in 1960, the Packers managed to then win two NFL championships in 1961 and 1962.

Mel Hein played 15 years for the New York Giants during the beginning years of the National Football League. From 1931 to 1945, Hein played center and linebacker for the Giants. It’s worth noting that in the early days of pro football, it was more common for players to play both offense and defense. In the years 1934 and 1938, Hein started at center and paved the way for a Giants rushing attack that won NFL championships in those two years. Hein recorded ten career interceptions as a linebacker. He likely had more than that, but the statistic wasn’t recorded until 1940.

George Trafton was a center that played in the early days of professional football. After a successful college career at Notre Dame, he moved on to play professional football with the Chicago Bears franchise for the rest of his playing career. Trafton is known as the first center to use one hand to snap the ball instead of two. He won two NFL Championships in his 12-year playing career, one in 1921 and the other in 1932. Trafton was selected to two First-Team All-Pro lists, and was inducted into the Pro Football Hall of Fame in 1964.

Known during his day as “Bulldog,” Clyde Turner was the headline center for the Chicago Bears between 1940 and 1952. Turner’s NFL career began with a stroke of luck, as he was initially slated to play for the Detroit Lions, but went to the Bears as a result of the Lions never drafting him, allowing Chicago to pick him up even though they were sure Turner would join the Detroit team. As a Bear, Turner excelled on both offense and defense across 13 seasons, recording eight interceptions in 1942 as a linebacker, and perfecting his snapping and blocking abilities at center. He even served as a ball carrier in some circumstances, highlighting his versatility as a player. Turner was named to the Pro Football Hall of Fame in 1966.

Dermontti Dawson was a second-round draft pick by the Pittsburgh Steelers, but his 1988 rookie year was plagued by a knee injury. However, he still started in five out of eight games, and in the next year, he became the Steelers’ starting center. He truly became the “center” of the offense, in more ways than one, because his performance helped Pittsburgh’s other offensive players put up impressive yardage totals. Among Dawson’s most famous fellows on the Steelers’ offense was Jerome Bettis, who with Dawson’s help set multiple records and near-records for rushing yards. Dawson’s performance led him to be named co-AFC Offensive Lineman of the Year in 1993, and in 1994 and 1997, the Steelers led the NFL in rushing yards, partly due to Dawson’s work.

Who is the best football center of all time?

Many believe the greatest center of all time is former Raiders’ center Jim Otto. Otto played a lengthy career in Oakland and was a part of multiple competitive teams. He was a part of an early movement within the Raiders that helped shape their mentally tough and physically imposing reputation. This reputation carried over even after he retired, helping lead to the franchise’s first Super Bowl victory under head coach John Madden in the 1976 NFL season.

What NFL center has the most career Pro Bowl appearances?

Oakland Raiders center Jim Otto is the all-time leader amongst centers with 12 Pro Bowl appearances. This is tied for ninth all-time in NFL history amongst all positions. Otto is one of only two offensive linemen with as many Pro Bowl appearances (Will Shields). Not only did Otto appear in 12 Pro Bowls, but he did it in 12 out of 13 seasons. Only 15 players have 12 or more Pro Bowl selections in the history of the NFL, cementing Otto’s legacy as an all-time great.

What NFL center has the most career All-Pro selections?

Jim Otto leads all NFL centers with ten All-Pro selections. This doesn’t only lead all centers, but it is tied with Jerry Rice for most All-Pro selections in NFL history by any player. Otto has more All-Pro appearances than players like Reggie White, Lawrence Taylor, and Peyton Manning. Otto was dominant at the center position in a way that no other player other than Jerry Rice has been at their respective position.

Pages Related to Top 6 Best NFL Centers of All Time