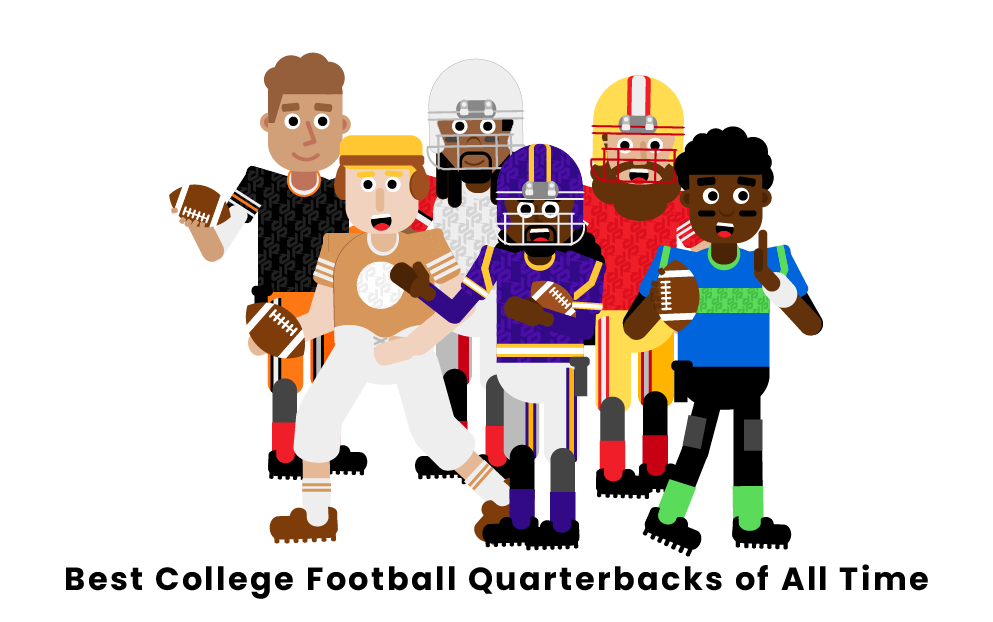 American college football is highly competitive, and much of each team’s success lies in the strength of their quarterback. To be counted as one of the greatest college quarterbacks of all time, one must display accuracy, perfect footwork, team anticipation, high pocket presence, quick decision-making, peak mental endurance, and all-around athleticism. Listed below are the top six best college football quarterbacks of all time.

Who are the Best College Football Quarterbacks of All Time?

Though a non-traditional choice, Vince Young is often considered one of the greats among college football quarterbacks. During his four years at the University of Texas, Young achieved 8,964 passing yards, 46 touchdowns, and a 61.8% completion percentage. While he never took home the Heisman Award, he won the Maxwell Award in 2005 for the best player in college football. He was also voted the Big 12 Male Athlete of the Year following that season. Thanks to his leadership during an 11-1 season in 2004 and a National Championship title in 2005, Vince Young is easily one of the best college quarterbacks of all time.

Despite controversial flaggings and resulting transfers, Cam Newton is regarded as one of the best quarterbacks in college football history due to one spectacular season. In 2010, Newton played for Auburn University, successfully rushing for 2,854 yards, throwing for 41.2 points per game, leading the team to an undefeated 12-0 regular season, and winning the BCS championship game over Oregon in a 22-19 victory. Thanks to one stellar year, Cam Newton was selected first overall by the Carolina Panthers in 2011 and went down as one of the best college football quarterbacks of all time.

Thanks to his sensational run for the Florida State Seminoles, Charlie Ward cemented his title as one of the best college quarterbacks of all time. Throughout his years with Florida State, Ward achieved 5,747 passing yards, 49 touchdowns, and a completion percentage of 62.3. In 1993, Ward threw over 3,000 passing yards during his final season, led the Seminoles to a National Championship against Nebraska in the Orange Bowl, and was awarded the Heisman Trophy. Though he ultimately chose to continue a career in the NBA over the NFL, Charlie Ward is still forever remembered as one of the quarterback greats.

Before he was a star quarterback in the NFL, Peyton Manning became famous as a landmark in college football. During his four-year tenure at the University of Tennessee, Manning successfully threw for 89 touchdowns, 33 interceptions, and a total of 11,201 passing yards. In his most successful season in 1997, he won many awards and led his team, the Volunteers, in an 11-2 season. Before being drafted by the Indianapolis Colts, he finished his successful college career with a 39-6 record and the title of SEC’s all-time career passing leader.

Though now known for his success with the Cincinnati Bengals, Joe Burrow made his fame first playing for Louisiana State University. During his two-year stint playing for the Tigers, Burrow achieved 8,565 passing yards, 76 touchdowns, and a 68.5% completion percentage. During his second and most successful season, Burrow secured the 2019 National Championship for LSU and threw for 5,671 yards, 60 touchdowns, and an epic 76.3% completion percentage. Thanks to these records and numerous awards, Joe Burrow will forever be known as one of the greatest college football quarterbacks of all time.

While he never quite made a name for himself in the NFL, Johnny Manziel is one of the most dominant quarterbacks NCAA football has ever seen. He played for Texas A&M for two seasons in 2012 and 2013. “Johnny Football” is considered one of the most mobile quarterbacks in NCAA history. Manziel won the Heisman Trophy as a freshman in 2012 after passing for 3,706 yards and 26 touchdowns, along with 21 rushing touchdowns. Manziel also came fifth in Heisman voting the following year. He was drafted by the Cleveland Browns with the 22nd pick in the 2014 NFL Draft.

Lamar Jackson is considered one of the most versatile quarterbacks in NCAA football history. He played three years for the Louisville Cardinals before being drafted by the Baltimore Ravens with the 32nd pick in the 2018 NFL Draft. Jackson won the Heisman Trophy in 2016 during his sophomore year at Louisville after passing for 30 touchdowns and 3,543 yards, along with 21 rushing touchdowns. Lamar Jackson has gone on to be dominant at the professional level and has been leading the Baltimore Ravens offense since 2018.

Baker Mayfield started his college career as a walk-on at Texas Tech University, but transferred to Oklahoma after his freshman year. He would eventually become one of the most exciting college football players ever. Over the course of his career, he threw for 14,607 passing yards and 131 touchdowns. Throughout his 48 college football games, he had an impressive 39-9 record. He attracted plenty of media attention as well, particularly for his crude and inflammatory actions toward opposing teams. Perhaps Baker’s best season came in 2017, when he led the Sooners to the College Football Playoff and won the Heisman Trophy. During this season, he completed over 70% of his passes with 43 touchdowns. Mayfield would go on to be the number one pick in the 2018 NFL Draft the following year.

Who is the greatest college quarterback of all time?

The greatest college quarterback of all time is Tim Tebow. He broke almost 30 records at the University of Florida and is still the career record-holder in completion rate, passing, rushing yards for a quarterback, rushing touchdowns, as well as touchdowns in general. In addition to his career-high statistics, the Gators won two SEC Championships as well as two BCS National Championships under his leadership.

What college quarterback holds the record for the most passing yards in a single season?

The college quarterback with the current record for most passing yards in a single season is Western Kentucky’s Bailey Zappe with 5,967. The previous title holder was Texas Tech’s B.J. Symons at 5,833. At the end of 2021, Zappe broke Symons’ record with a 44-yard pass to wide receiver Jerreth Sterns and ended the season with a total passing yards count of 5,967.

What college quarterback holds the record for the most passing touchdowns in a single season?