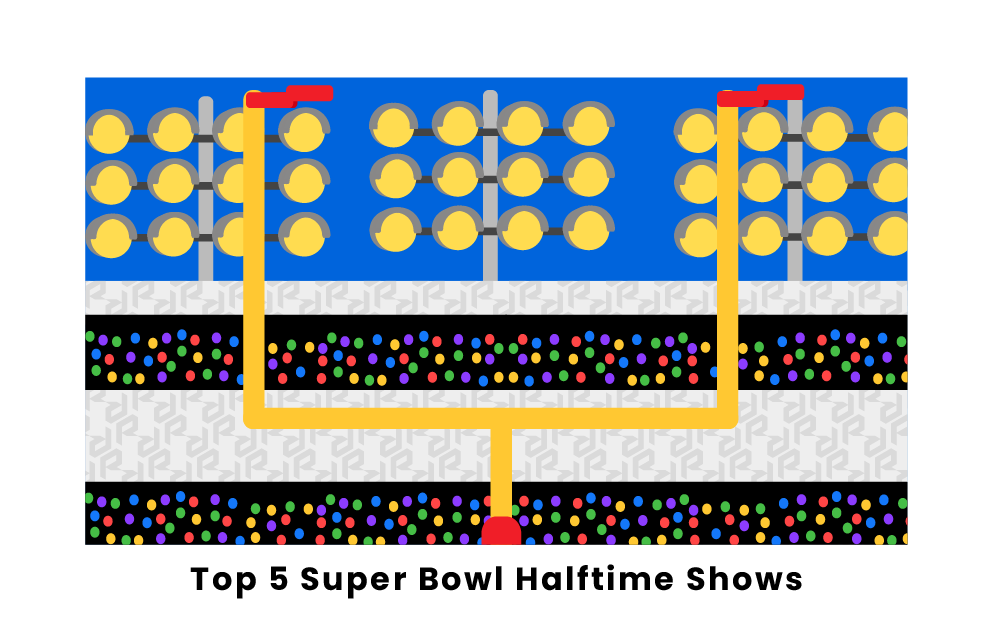 What are the most popular Super Bowl halftime shows?

Only Prince could make a Super Bowl halftime show feel heavenly. In 2007 in Miami, while the Colts played the Bears, Prince tore down the house during a thunderstorm. Prince started his set on the stage designed as his own logo with riffs from "We Will Rock You" before going into "Let's Go Crazy." The artist was backed up by the Florida State marching band, which provided an unexpected but beautiful mix of sounds for his classic songs. Prince's grand finale was his most famous song, "Purple Rain." It could not have been more perfect as the singer strutted in his high heels across the wet stage. This 2007 performance is undeniable as the best of all time.

In terms of emotion, this 2002 performance is at the top of the list of Super Bowl halftime shows of all time. This was only five months after the deadly attacks of 9/11 meaning the US was still mourning. Bono delivered a highly tragic and beautiful performance. While the song "Where the Streets Have No Name" played, Bono travelled all around the stage as a giant sheet was illuminated with the names of the victims who died on September 11th. The song brought the entire New Orleans Superdome to its feet, even more so when Bono opened his jacket to reveal an American Flag inside. To this day, the Super Bowl XXXVl performance is chill inducing.

Do you want to hear the weirdest combination of artists that actually worked? Enter the 2001 Super Bowl Halftime Show. At the time this combination was unheard of and was fascinating to many. NSync opened up with "Bye Bye Bye" as Steven Tyler played "I Don't Want to Miss a Thing" simultaneously. Nelly rapped over Joe Perry's guitar solo, and Britney Spears and Missy Elliot shared a stage. This combination of artists was the perfect culmination of the early 2000s. This performance also gets its popularity for being the first performance to allow fans onto the field to watch the show. Super Bowl 50 tried to replicate the success of Super Bowl 35, with Coldplay, Beyonce and Bruno Mars but was unable to replicate the controlled madness that occured in 2001.

The only problem with Bruce Springsteen doing the Super Bowl Halftime show in 2009 was that he hadn't done it sooner. The Boss has been a staple of American music for years, and some wondered why he wasn't asked to do the Super Bowl earlier. Springsteen started his set at the Raymond James Stadium in Tampa by announcing to the crowd that they needed to put down their chicken wings and guacamole in order to fully enjoy the E Street Band. What followed was twelve minutes of a traditional and powerful rock concert. When Bruce and his band broke out into "Born to Run," the stadium was said to shake as people jumped.

How powerful is the Super Bowl Halftime Show? Powerful enough to bring together a group that had an ugly break up. It was no surprise that Queen Bey would be tapped to perform during the Super Bowl. In 2013, took the stage at Mercedes-Benz Stadium in New Orleans and brought down the house with "Crazy in Love," "Baby Boy," and "Love on Top." Some people thought Beyonce would bring out her husband Jay-Z. Instead, Kelly Rowland and Michelle Williams shot out onto the stage for a surprise reunion of Destiny's Child. The trio performed some of their hits and then did Beyonce's song "Single Ladies." This performance was fitting of the queen of pop, and was enough to have the NFL call her back to perform during Super Bowl 50.