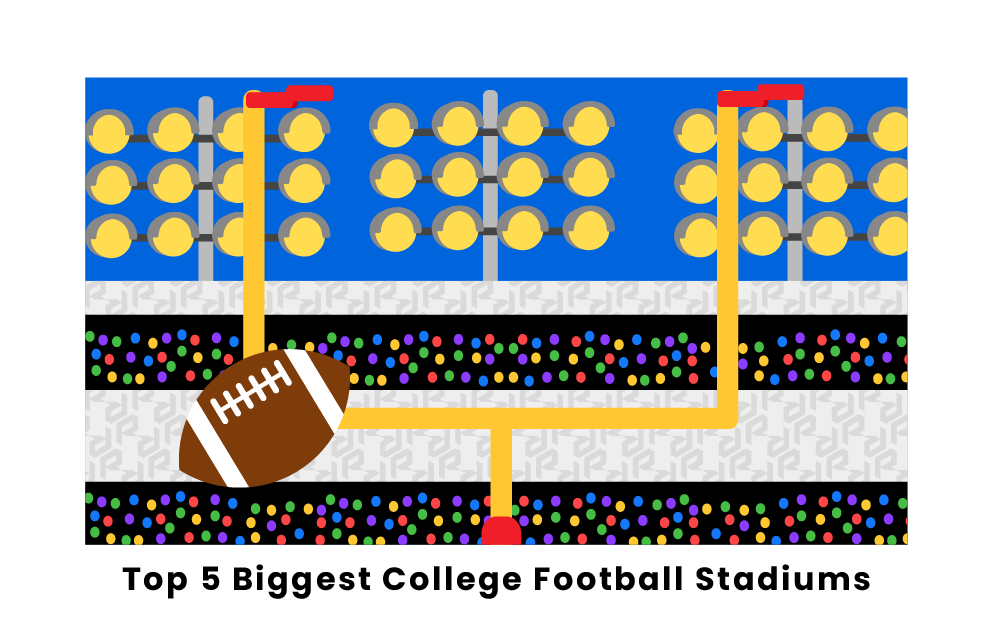 What are the biggest stadiums in college football?

College football is arguably the biggest sport in the United States, with some of the most passionate fans and biggest box-offices. The stadiums are no less colossal. Here are the five biggest stadiums in college football:

Michigan Stadium in Ann Arbor, Michigan is home to the Michigan Wolverines, member of the Big Ten conference and a football powerhouse. Michigan holds the most college football wins all-time. With a maximum capacity of 107,601 fans, this stadium can hold more people than the biggest NFL stadiums.

Nicknamed “The Big House”, the stadium has 14 different elevators, features a Michigan Football Hall of Fame display, and has an entire level dedicated to premium suites. Only Beaver Stadium of Penn State football (the second largest stadium in the country) can come close to Michigan Stadium in grandeur.

Beaver Stadium in State College, Pennsylvania can hold 106,572 fans within its walls. This stadium is home to the Penn State Nittany Lions. As the second largest stadium in the country, this massive structure added 12,000 seats in its most recent renovation in 2001.

Nicknamed “Happy Valley,” State College is home to one of the best football teams in the country. The Nittany Lions, a Big Ten conference member, have won four conference titles, four national championships, and boast one of the best all-time records in college football history.

Ohio Stadium, coming in with a total capacity of 102,780, sits at the number three position in the biggest college football stadium rankings. Also known as “The Horseshoe” or just “The Shoe,” Ohio Stadium is home to the Ohio State Buckeyes, a long-time powerhouse on the college football scene.

Since hosting its first game in 1922, over 36 million fans have entered the stadium, and the massive sea of red has become a college football landmark in the United States.5 The stadium also frequently serves as a concert venue, having hosted the likes of Pink Floyd and Taylor Swift in the past.

Kyle Field lands just beneath Ohio Stadium as the fourth largest stadium in college football, with the Texas A&M Aggies playing in front of a maximum crowd of 102,733 fans. First built in 1904 and expanded into a stadium in 1927, Kyle Field is a cornerstone of Aggie life.

Newly renovated in 2014-2015, Kyle Field was transformed from an impressive stadium to a monument of A&M pride. With a budget of $485 million, the revamp has enabled Kyle Field to now seat many thousands more fans per football game since its renovation.

Tiger Stadium, home of the LSU Tigers, has a capacity of 102,321. Nicknamed “Death Valley,” it is considered to be one of the most intimidating places to play in all of sports. Tiger Stadium opened its doors in 1924, making it one of the oldest stadiums in modern college football.Tiger Stadium has undergone many changes and renovations over the years. When it was first built, it only seated 12,000 fans. It is now much larger and consistently sold out, as the LSU Tigers are one of the best and most-beloved college football teams in the country.

Neyland Stadium is home to the SEC-member Tennessee Volunteers and has a capacity of 101,915. Located in Knoxville, Tennessee, the stadium has been revamped and remodeled a total of sixteen times, with the most recent being a major overhaul between 2004 and 2006. At 70,000 square feet, the stadium features college football’s largest LED-screen display. Though initially called Shield-Watkins field in 1919, the stadium was rededicated to Robert Reese Neyland in 1962. The University of Tennessee has also announced plans for a $340 million renovation project for 2022.

Home of the University of Alabama and The Crimson Tide, Bryant-Denny has a massive capacity of 101,821. The stadium first opened its doors to Alabama fans in 1929 and the stadium has continued to exponentially grow alongside the SEC school’s population. The stadium’s most recent renovation was a several area expansion in 2020 that cost a whopping $107 million. Located in the heart of Tuscaloosa, the stadium gets its name from cherished football coach Paul W. Bryant and former University of Alabama president Dr. George Denny.

Darrell K Royal-Texas Memorial Stadium is home to the University of Texas Longhorns and seats 100,119 fans. It has been the Longhorns’ home for almost 100 years, as the first game was played in the stadium in 1924. The most recent renovation to the stadium was in 2021, when the field was upgraded with new turf.

What is the biggest college football stadium?

The biggest college football stadium in America is Michigan Stadium. With 14 separate elevators, a full Michigan Football Hall of Fame display, and an entire level of premium suites, Michigan Stadium is the home of University of Michigan Wolverines and holds an unprecedented capacity of 107,601 fans.

What is the smallest college football stadium?