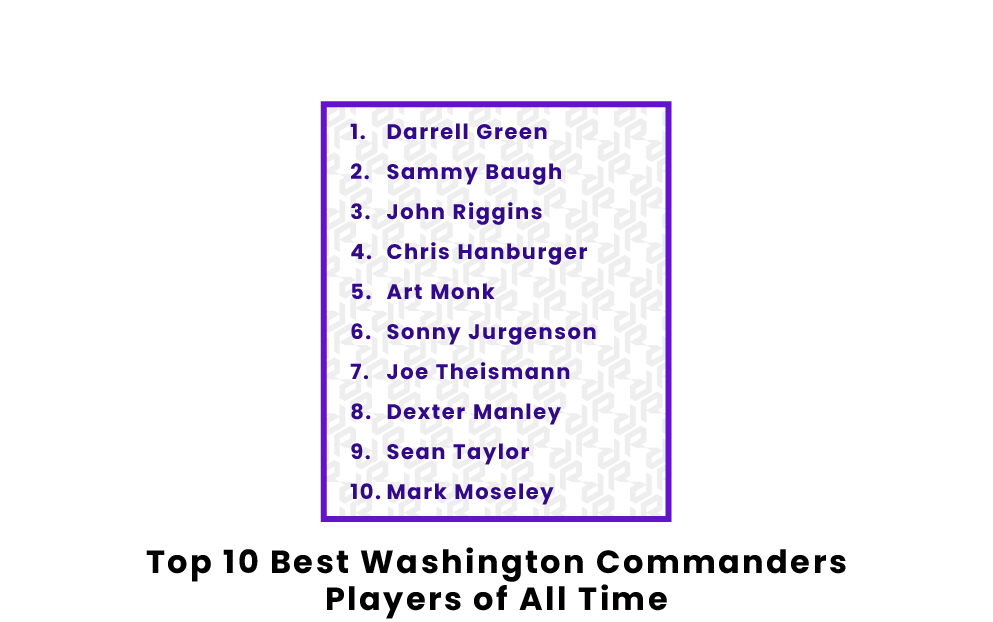 With three Super Bowl wins to their name and a history that can be traced back all the way to 1932, the Washington Commanders are one of the most storied franchises in the entire National Football League. They would never have found that success if not for some of the talented players that graced their roster over the years. These ten players are the best Washington Commanders of all time.

Who Are the Best Washington Commanders Football Players of All Time?

Darrell Green is by far the best defensive player to have ever put on a Washington Commanders uniform. And not only is he the best Commander of all time, Green is considered one of the best cornerbacks to ever play professional football. Green played cornerback for the Commanders for nearly two decades between 1983 and 2002. In that span, he won two Super Bowls with the team and collected a serious amount of accolades.

Green was named to the First-Team All-Pro list four times throughout his career and was also invited to attend seven Pro Bowls. And in Green’s rookie season, he was voted to the All-Rookie team, as determined by the Pro Football Writers of America. By the end of his lengthy career (which was spent entirely in a Commanders uniform), Green had racked up 54 interceptions, six touchdowns, and over a thousand tackles. His excellence and his consistency are why he was inducted into the Pro Football Hall of Fame.

Sammy Baugh played for the Washington Commanders between 1937 and 1952, before the AFL/NFL merger. As such, Baugh was one of the best players to ever play in the fledgling NFL and is perhaps one of the most well-rounded professional football players ever. Baugh played punter and safety, but he excelled at quarterback. Baugh led the Commanders to two NFL Championships wins, which was the precursor to the Super Bowl before the merger. He was named to four First-Team All-Pro lists and played in six total Pro Bowls.

John Riggins was a running back for the Washington Commanders during the late 1970s and early 80s. He proved to be a dynamic running back and helped carry the team to a Super Bowl win in the 1982 NFL season. During that Super Bowl, Riggins rushed for 166 yards and was thus named the Super Bowl MVP.

Riggins was also named the prestigious NFL Comeback Player of the Year in 1978 after he posted more than a thousand rushing yards a year after his 1977 knee injury. 1983 was likely Riggins’ best season statistically, as he posted 1,347 yards on the ground along with 24 touchdowns, which was a record at the time. Riggins led the NFL in rushing touchdowns the next season in 1984 as well. All told, Riggins scored 104 touchdowns in his career and ran for 11,352 yards. He was inducted into the Hall of Fame in 1992.

Chris Hanburger is one of the best players to ever play on the defensive side of the ball for the Washington Commanders. Hamburger played linebacker for the team from 1965 to 1978, which comprised the entire extent of his enormously successful professional playing career.

He was named to the prestigious First-Team All-Pro list an impressive five times, with the first time in 1969 and the last in 1976. He maintained a level of excellence throughout his career that is simply rare. As such, he was also named to nine Pro Bowls. After his retirement, he was elected to the Washington Commanders Ring of Fame, which honors the team’s greatest players over their long history. And in 2011, Hanburger was elected to the Professional Football Hall of Fame. He finished his legendary linebacking career with a solid 19 interceptions and even managed to score five total touchdowns.

Art Monk was a highly talented wide receiver who played for the Washington Commanders for over a decade between 1980 and 1993. He was selected in the first round of the 1980 NFL Draft, where the Commanders used the 18th overall pick to draft Monk. Over the course of his lengthy career with the team, Monk had the rare honor of being involved in all three of their Super Bowl wins.

Monk’s consistency throughout his career was the stuff of legend. Art Monk totaled 940 receptions over the span of his career with the Commanders, which is good for the 20th position in all-time receptions. And from those 940 receptions, Monk gained 12,721 yards and 68 touchdowns. He was named a First-Team All-Pro in 1984 and a Second-Team All-Pro in 1985. He was also selected to the Pro Bowl in three straight seasons between 1984 and 1986. Upon retirement from the NFL, Monk was selected for the Pro Football Hall of Fame.

Sonny Jurgenson was another highly successful quarterback who played for the Washington Commanders between 1964 and 1974. Like many of the other players on this list, Jurgenson was known for his consistency and reliability. Jurgenson actually led the league in total passing yards in five separate seasons, the first of which was in 1961, and the last in 1969 almost a decade later. He was selected to five total Pro Bowls, and he made the First-Team All-Pro list in 1961. However, he was named to the Second-Team list three times.

As a result of this consistency, Jurgenson was named to the NFL All-Decade team for the 1960s. Within the Commanders organization, Jurgenson had both his number (number nine) retired and was selected for the Ring of Fame inside their stadium. He threw for a total of 32,224 yards and maintained an impressive 82.6 passer rating over the course of his long career in the NFL. He was ultimately inducted into the Hall of Fame.

Joe Theismann is one of the most recognizable names in all of professional football, which is a result of his excellence with the Washington Commanders. Theismann was drafted into the NFL with the 99th overall pick, but he eventually found his stride, winning some of the most important awards that the NFL has to offer. For one, he helped the Commanders win a Super Bowl in 1982. That season saw Theismann complete a career-high 63.9% of his passes. In the Super Bowl, he threw for two touchdowns.

However, it was in 1983 that Theismann put together what was probably his finest season in professional football. That season, Theismann threw for 3,714 yards and 29 touchdowns and held an extremely high passer rating of 97.0. For his efforts that season, Theismann was given the awards for both Most Valuable Player and Offensive Player of the Year. Theismann’s name is included in the Washington Commanders Ring of Fame.

Dexter Manley was drafted by the Washington Commanders out of Oklahoma State in the fifth round of the 1981 NFL Draft. As a defensive end, Manley made an impact on the team throughout his career and was a member of the Commanders until 1989. In that time, Manley won two Super Bowls with the team, the first in 1982 and the second in 1987. He was named a First-Team All-Pro player at defensive end in 1986. He also made the Pro Bowl that year. A year later, he was named a Second-Team All-Pro.

By the time of his retirement from professional football in the early nineties, Manley had amassed 97.5 career sacks. In the 1986 season alone, Manley was able to record 18.5 sacks. It was this level of excellence that earned him a spot in the Washington Commander’s Ring of Fame.

Sean Taylor was one of the most promising young players in the history of the Commanders organization. Taylor was drafted fifth overall by the organization out of Miami in 2004. He played safety for the team until his tragic death in 2007. In that short amount of time, Taylor made a significant impact on the team. Taylor was named to the selective All-Rookie team, which is decided by the Pro Football Writers of America.

Taylor finished that rookie season with 76 total tackles and four interceptions. His best season, however, was in 2006, when he recorded 111 total tackles and forced four turnovers. His 2007 season also saw him secure five interceptions in only nine games. Taylor was renowned for being an extraordinarily hard-hitting player and is part of the reason why he was named to two Pro Bowls and the Second-Team All-Pro list once. Taylor’s number 21 was retired by the Commanders organization following his death.

Mark Moseley was the kicker for the Washington Commanders between 1974 and 1986. Moseley had the rare honor of being named the NFL’s Most Valuable Player by the Associated Press in 1982. That season saw him kick 20 of 21 field goals through the uprights and single-handedly score 76 points for the Commanders in what was a strike-shortened season in 1982.

In their Super Bowl win that year, Moseley made all of his kicks, including two field goals and three extra points. Moseley was also named a First-Team All-Pro in 1982 and was selected to appear in his second Pro Bowl, with his first being in 1979. 1983 saw Moseley lead the entire league in scoring as he posted 161 total points. Over the course of his career, Moseley scored 1,382 total points. After his retirement from football in 1986, he was named to the Washington Commanders Ring of Fame.

Who is the best Washington Commanders quarterback of all time?

Sammy Baugh is the greatest Washington Commanders quarterback of all time. Although Baugh is perhaps best known for his ability to play many different positions, Baugh was a truly great quarterback. In fact, Baugh’s ability to throw the ball transformed NFL offenses from a run-first style. With Baugh at the helm, Washington was much more willing to let the ball fly through the air.  For his era in football, Baugh was extremely accurate and incredibly precise.

Who is the best Washington Commanders running back of all time?

John Riggins is easily the greatest running back in the entire history of the Washington Commanders. Riggins won a variety of awards in the NFL, including Super Bowl MVP and Comeback Player of the Year, and was named to both a First-Team All-Pro list and a Pro Bowl. He twice led the league in rushing touchdowns and was named to the All-Decade team for the 1980s. His success landed him in the Pro Football Hall of Fame.

Who is the best Washington Commanders wide receiver of all time?

Art Monk is by far the best Washington Commanders wide receiver of all time. He was a member of all three of Washington’s Super Bowl-winning teams and was named to both a First and Second-Team All-Pro list. He was also selected to attend the Pro Bowl in three separate seasons. He led the league in receptions in 1984, made the All-Decade team for the 1980s, and is now a member of the Pro Football Hall of Fame.

Pages Related to Top 10 Washington Commanders Players of All Time