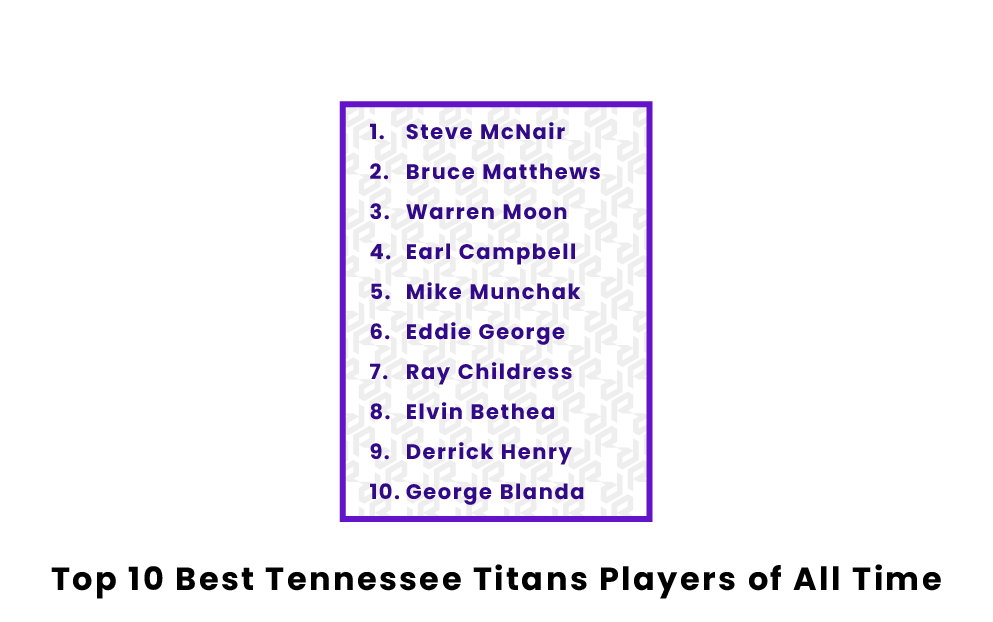 Who Are the Best Tennessee Titans Football Players of All Time?

Having joined the team in 1995, quarterback Steve McNair led the transition of the franchise from Houston to Tennessee, delighting the new fanbase with many years of stellar play. As the third pick in the 1995 NFL Draft, McNair was widely recognized as a top prospect. However, he did not win the starting job until his third season in the league, when he started turning things around in Nashville.

In his third season as a starter, McNair led an electric offense to the first Super Bowl in franchise history after a 12-3 regular season record. Despite pulling off the “Music City Miracle” in the Wild Card Game, the Titans would fall to the Rams in the Super Bowl. McNair’s best season came in 2003 when he brought home the NFL MVP trophy. As a member of the Titans, McNair was a three-time Pro Bowler and had his number 9 jersey hung up in the rafters.

Bruce Matthews is considered one of the best, most versatile, and reliable offensive linemen in NFL history. In 19 seasons with the Titans franchise, Matthews played in every of the 293 games he was eligible for, started 229 consecutive games, and played in every single position in the offensive line, including long snapper in the special teams unit.

Bruce Matthews was drafted with the ninth overall pick in the 1983 NFL Draft and spent all his career with the Titan, who eventually retired his number 74 jersey. Throughout his career, the University of Southern California alum was a seven-time First-team All-Pro and made the Pro Bowl in fourteen consecutive seasons from 1988 to 2001. The 2007 Pro Football Hall of Fame inductee is a member of the NFL 1990s All-Decade Team and was voted into the NFL 100th All-Anniversary Team.

Before McNair was drafted by the Titans, Warren Moon was considered the greatest quarterback in franchise history. After four years between West Los Angeles College and the University of Washington, Moon went undrafted in 1978. This led him to start his career in the Canadian Football League, where he dominated for five seasons before joining the Titans.

Warren Moon struggled at first in the NFL, finishing each of his first three seasons with more interceptions than passing touchdowns than interceptions. However, Moon started raising the bar starting from the 1988 season, making it to the Pro Bowl in five consecutive seasons and winning the 1990 NFL Offensive Player of the Year award. The Los Angeles native also led the league in passing touchdowns and yards in 1990 while earning Second-team All-Pro honors. Following Moon’s retirement in 2000, the Titans decided to retire his number 1 jersey and included him in their ring of honor.

Throughout their history, the Titans have always been a run-heavy team thanks to explosive halfbacks like Earl Campbell. The member of the 1991 class of the Pro Football Hall of Fame came into the league after a great four-year career at the University of Texas, which earned him the first overall selection in the 1978 NFL Draft.

In the late eighties and early nineties, the Titans were able to run one of the best offenses in the league thanks to their offensive line that featured guard Mike Munchak (next to Bruce Matthews). A nine-time Pro Bowler, Munchak started 156 games for the Titans, making the playoffs in seven of his 12 seasons with the franchise.

As a Second-Team All-American, Munchak was a high-rated prospect coming out of Penn State as he was selected with the eighth overall pick in the 1982 NFL Draft. During his 12-year career with the Titans, Munchak was an eight-time All-Pro, with two selections to the First-team and six to the Second-team. He was also a member of the NFL 1980s All-Decade Team, while the Titans elected him to their ring of honor and retired his number 63 jersey following his retirement from the NFL in 1993.

Legendary running back Eddie George followed a similar career path as Cambell, becoming one of the most loved running backs in the history of the Titans franchise. Just like Campbell, George entered the league after a stellar college career, as he won the 1995 Heisman Trophy while playing at Ohio State University. This led the Titans to draft him with the 14th pick in the 1994 NFL Draft.

In his first year, the last in Houston for the franchise, Eddie George reached over 1,500 total yards earning him the NFL Offensive Rookie of the Year award. George went on to make the Pro Bowl in each of the following four seasons while earning a Second-team All-Pro selection in 1999, as the Titans reached their first-ever Super Bowl. He was also a member of the 2000 First-team All-Pro and started in each of the 128 games he was eligible for during his Titans career.

Elvin Bethea is the greatest defender to ever wear the Titans blue. With two hundred and ten games, including one hundred twenty-five consecutive starts, sixteen seasons, Bethea is second all-time in the history of the Titans franchise for games played.

Elvin Bethea was drafted in the third round of the 1968 NFL Draft as a semi-unknown prospect from North Carolina A&T State University. After a first season where he saw limited time, Bethea started becoming a nightmare for the opponents’ offenses posting double digits sacks in six out of eight seasons from 1969 to 1976. During his career, he made it to the Pro Bowl eight times and twice to the Second-Team All-Pro. Right after he retired in 1983, the Titans, then the Oilers, decided to hang up his number 65 jersey.

Elvin Bethea is followed by another great defender in the history of the franchise, who, after Bethea’s retirement, replaced him as the star of the Titans’ defense: Ray Childress. The Memphis native was drafted by the Titans with the third pick in the 1985 NFL Draft after a career as a two-time All-American at the University of Texas A&M.

Childress went on to spend 11 years with the Titans, during which he was a five-time Pro Bowler, with three of those call-ups coming in consecutive seasons from 1990 to 1993. During that span of time, Ray Childress was also voted into the First-team All-Pro once and four times to the Second-team. He also shares the NFL record for most fumbles recovered in a single game, as he recorded three fumble recoveries in the 41-17 win against the Washington Redskins in the 1988 season.

Three-time Pro Bowler Derrick Henry is the latest legendary running back to have played for the Titans franchise. Just like Earl Campbell and Eddie George, Derrick Henry came into the NFL as a Heisman winner after three years of dominating college football at Alabama.

Derrick Henry struggled to get game time in his first two seasons after he was drafted in 2015. However, since the 2018 NFL season, Henry has made it to the Pro Bowl three times, having his best season in 2020 when he won the NFL Offensive Player of the Year Award and earned a spot on the First-team All-Pro. The Florida native led the league in rushing yards and touchdowns in two consecutive seasons between 2019 and 2020 and shares the record for the longest rushing touchdown after his 99-yard house call against the Jaguars in Week 14 of the 2018 NFL season.

Kentucky graduate George Blanda closes out the list of the ten greatest players of all time in Titans history. Having the record for most seasons played in the league’s history with 26, George Blanda is a true NFL legend. Blanda played in four different decades, as he was drafted in 1949 and retired at 48 in 1975, which still makes him the oldest player to have ever played in the league.

In seven years with the Titans, Blanda played the whole time as a quarterback and placekicker, winning two AFL Championships and receiving the AFL MVP award in 1961. George Blanda also holds the record for most extra points made and attempted, having only missed 16 out of the 959 he kicked in his career. During the 1962 season, Blanda tied the NFL record for most passing touchdowns in a game, having thrown seven against the New York Titans.

Who is the best Tennessee Titans quarterback of all time?

Steve McNair is the best quarterback in the history of the Titans franchise. The 2003 NFL MVP is, to this day, the only quarterback to take the Titans to the Super Bowl, as the team fell short against the Los Angeles Rams in 1999. The Titans have retired his number 9 jersey after making it three times to the Pro Bowl and once to the Second-team All-Pro in 11 seasons between Houston and Nashville.

Who is the best Tennessee Titans running back of all time?

Earl Campbell is the best Tennessee Titans running back of all time. The Titans have had some of the greatest running backs in NFL history, including Eddie George, Derrick Henry, and Chris Johnson. However, Campbell tops them all. In seven years with the franchise, he won many awards, including the 1979 NFL MVP and the NFL Offensive Player of the Year, in three consecutive seasons from 1978 to 1980. Campbell also led the league three times in rushing yards and twice in rushing touchdowns in that same span of time.

Who is the best Tennessee Titans wide receiver of all time?

Louisville alum Ernest Givins is the greatest wide receiver in the history of the Titans franchise. With 7,935 receiving yards, Givins is the Titans’ all-time leader in receiving yards. Givins spent nine years with the team, starting in all of the 138 games he was eligible for and leading the Titans to the playoff six times while earning two Pro Bowl selections and a Second-team All-Pro nod in 1990.

Pages Related to Top 10 Tennessee Titans Players of All Time