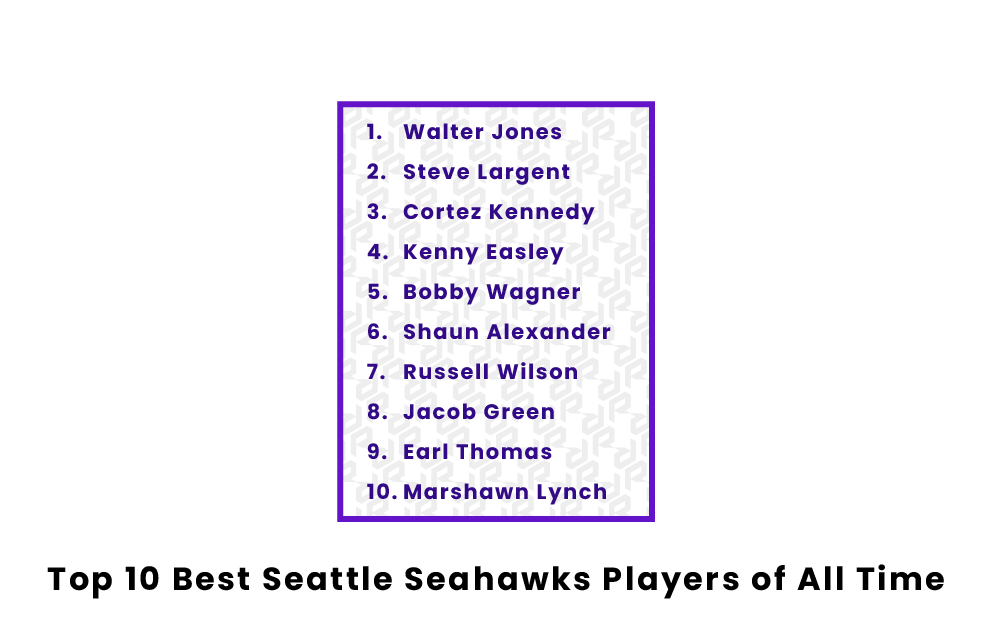 Since their entry into the National Football League in 1976, the Seattle Seahawks have found success in many different years. They won a Super Bowl in 2013 and appeared in two others. They’ve also won the NFC West division title nine times, all of which came after 2004. It’s thanks to the many talented players that the Seahawks have rostered, including the 10 listed below, that they have soared to such great heights.

Who are the Best Seattle Seahawks Football Players of All Time?

Walter Jones played offensive tackle for the Seattle Seahawks beginning in 1997 and ending in 2009. He played his entire career with the Seattle-based team. During his lengthy career, Jones managed to amass a truly impressive amount of awards and accolades. Chief among them would be his four appearances on the First-Team All-Pro list, which is one of the highest honors a player can receive in the National Football League. His first was in 2001, and the last in 2007. He also appeared on the Second-Team list twice. Additionally, Jones was selected for the Pro Bowl a total of nine times over the course of his career. Jones was also such a force at offensive tackle that he was named to the NFL’s All-Decade team for the 2000s, and the Seahawks have actually retired the number he wore during his playing days, #71. Since his retirement, Jones has been elected to the Pro Football Hall of Fame.

Steve Largent was one of the great wide receivers to have ever played in the NFL, and he did it all with the Seattle Seahawks. Largent was on the Seattle roster between 1976 and 1989, which means he played for the team in their first-ever season in the league. Largent truly settled into his role in the late 1970s, when he was named to his first Pro Bowl and Second-Team All-Pro list in 1978. The best years of Largent’s career, however, were yet to come. Largent recorded what was likely his best season in 1985, when he recorded 1,287 receiving yards to go along with six receiving touchdowns. Out of his 14 seasons in the NFL, Largent had eight seasons of over 1000 receiving yards. But it was for his 1985 season that he was voted to the NFL’s First-Team All-Pro list. Largent has since been inducted into the Pro Football Hall of Fame.

Cortez Kennedy was a defensive tackle for the Seattle Seahawks who was able to reach the highest echelons of defensive greatness in the National Football League. The Seahawks drafted Kennedy with the third overall pick in the 1990 NFL Draft. He quickly fell into stride by making his first Pro Bowl in 1991, along with being named a Second-Team All-Pro in that same season. The following season in 1992, however, the world found out just what Kennedy was capable of. Kennedy exploded for a total of 92 tackles, 14 sacks, four forced fumbles, along with one fumble recovery. It was truly a season for the books, which was evidenced by his winning the NFL’s Defensive Player of the Year award and being named to both the Pro Bowl and the First-Team All-Pro list. He would go on to make the First-Team list in three consecutive seasons starting in 1992. He was elected to the Hall of Fame in 2012.

Kenny Easley spent only a total of seven seasons in the National Football League, but they were a remarkable seven seasons. He spent his entire career with the Seattle Seahawks, and in that time, managed to make five Pro Bowls, a Second-Team All-Pro appearance, and four First-Team appearances, all of which came in consecutive years between 1982 and 1985. The best of those years was easily 1984. In that season, Easley managed to secure an incredible 10 interceptions and even returned two of them for touchdowns. For his strong play that season, Easley was elected the NFL’s Defensive Player of the Year. Over the course of his career, Easley intercepted 32 passes and amassed 538 return yards on said interceptions. His efforts landed him on the NFL’s All-Decade team for the 1980s, along with a spot in the Pro Football Hall of Fame, which he was elected to in 2017.

Bobby Wagner played inside linebacker during the most successful era of Seahawks football to date. Wagner was one of the cornerstones upon which the 2013 Super-Bowl-winning team was built. The defense that year was known as the “Legion of Boom,” thanks to their reputation for tough, physical football. Wagner was perhaps the most consistent piece of that legendary defense, as evidenced by his impressive six First-Team All-Pro appearances. He made his first in 2014 and then in five consecutive seasons starting in 2016. He also made two Second-Team lists and eight total Pro Bowls. For that remarkable consistency, Wagner was named to the NFL’s All-Decade team for the 2010s. As of 2022, Wagner has posted some high stat totals, including just shy of 1,500 total tackles, 28.5 sacks, 12 interceptions, six forced fumbles, and four touchdowns. Though he now plays for the Los Angeles Rams, he’ll likely go down as one of the best linebackers of all time, and without a doubt, one of the best Seahawks ever.

Shaun Alexander played running back for the Seattle Seahawks between 2000 and 2007 and managed to find great success in those years. He made a total of three Pro Bowls, and both a First-Team and Second-Team All-Pro appearance. Alexander recorded five consecutive seasons of 1000+ rushing yards between 2001 and 2005, and he averaged more than four yards per carry in each of them. The best of these seasons was his 2005 season, which will go down as one of the best seasons by a running back in NFL history. In that season, Alexander led the league with 1,880 rushing yards and averaged 5.1 yards per carry. But what’s truly impressive about his 2005 season was his touchdowns: he scored 27 on the ground. It was a dominant performance over the course of a whole season, and he was rewarded by winning both the Offensive Player of the Year and the Most Valuable Player awards.

Russell Wilson is likely the best quarterback to have ever worn a Seattle Seahawks jersey. He played for the team between 2012 and 2021, and was able to bring the team to new heights. The peak of these heights would have to be the team’s Super Bowl win in 2013, which Wilson was absolutely instrumental in. During the regular season of that year, Wilson threw for 3,357 yards and 26 touchdowns, also holding a very strong passer rating of 101.2. In the Super Bowl, Wilson threw for an efficient 206 yards to accompany his two touchdown passes. Some of Wilson’s other successes include being named a Second-Team All-Pro in 2019, leading the league in touchdown passes in 2017 with 34, and being named to nine Pro Bowls. Wilson also won the prestigious Walter Payton NFL Man of the Year award in 2020, which honors the most charitable and philanthropic NFL player of that season.

Jacob Green was selected by the Seattle Seahawks in 1980 as the tenth overall pick in the NFL Draft. Green went on to play for the Seahawks until 1991 and was quite successful in his time with the franchise. He became one of the most feared pass-rushers of that era. Green was named a Second-Team All-Pro in 1984, and was selected to attend two Pro Bowls, the first in 1986, and the second in the following year. In his rookie year, he was also named to the All-Rookie team, which is assembled by the Pro Football Writers Association of America. For his efforts on the field and loyalty to the Seahawks organization, the team decided to place Green’s name on their Ring of Honor inside the stadium, which recognizes the most excellent players to have ever worn a Seattle uniform. And excellent he was, with 97.5 career sacks, six interceptions, and two touchdowns.

Earl Thomas was another key component of the “Legion of Boom,” which guided the Seahawks to their first Super Bowl win in 2013. Earl Thomas played free safety for the team and was quite good at it. Thomas was selected in the first round of the NFL Draft by the Seahawks in 2010, and he got off to a strong start by making the Pro Bowl in his second season. Then, starting in 2012, Thomas made three consecutive First-Team All-Pro lists. He was especially effective in their Super Bowl-winning season, in which he recorded 105 total tackles, five interceptions, and two forced fumbles. Thomas was also named a Second-Team All-Pro in two separate years, and was named to the Pro Bowl seven times in total. As a result of his consistently strong play, he was named to the NFL’s All-Decade team for the 2010s. Once his career was finished after the 2019 season, Thomas had totaled 30 interceptions and 713 total tackles.

Marshawn Lynch is one of the most iconic running backs in NFL history, thanks to his explosive abilities on the field, but also his outlandish personality. Lynch played for the Seahawks between 2010 and 2015 (and once more in 2019), which were some of the most successful years of his career. He was named a First-Team All-Pro in 2012, a Second-Team All-Pro in 2014, and was selected to the Pro Bowl in four straight seasons starting in 2011. In the Seahawk’s Super Bowl season of 2013, Lynch ran for 1,257 yards and 12 touchdowns in the regular season, and managed to find the end zone once in the Super Bowl. Lynch finished his career with 10,413 total rushing yards along with 85 rushing touchdowns. All told, he averaged a more-than-respectable 4.2 yards per carry over the course of his career. Thanks to that explosive play style and consistent success in the NFL, he was named to the All-Decade team for the 2010s.

Who is the best Seattle Seahawks quarterback of all time?

The best Seattle Seahawks quarterback of all time is Russell Wilson. Wilson spent 10 seasons in Seattle and managed to guide the team to two Super Bowls in that time, one of which he managed to win. While Wilson was at the helm, Seattle finished with a winning record in nine out of 10 seasons. The only losing season they suffered with Wilson at QB was in 2021, a season in which Wilson struggled with a finger injury.

Who is the best Seattle Seahawks running back of all time?

The best Seattle Seahawks running back of all time is Shaun Alexander. Alexander was incredibly consistent in his time at Seattle, rushing for over a thousand yards in five straight seasons. He also put together one of the best-ever seasons by a running back in 2005 with his 1,880 yards on the ground along with a truly ridiculous 27 rushing touchdowns. Alexander finished his professional career with 9,453 total rushing yards and 100 rushing touchdowns.

Who is the best Seattle Seahawks wide receiver of all time?

The best Seattle Seahawks wide receiver of all time is Steve Largent. Largent was named to the First-Team All-Pro list in 1985 and the Second-Team list in four other seasons. He was selected to the Pro Bowl seven total times and was a member of the NFL All-Decade team for the 1980s. He also twice led the NFL in receiving yards, once in 1979 and again in 1985. Largent was a consistent playmaker and will go down as one of the great Seahawks of all time.

Pages Related to Top 10 Seattle Seahawks Players of All Time