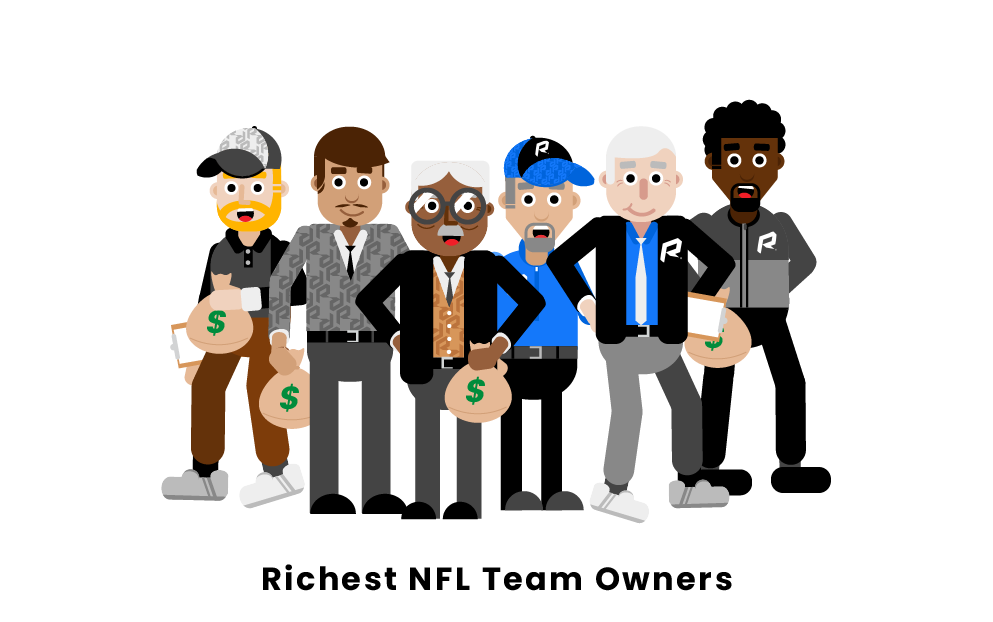 While they are not always treated and viewed as such, sports franchises are businesses. Thus, like any business, there are owners involved who manage and run each team as if it were their company. This is no different in the NFL. Each of the 32 teams has its own owner, except for the Green Bay Packers, who are uniquely owned by the Green Bay community. Below, the 10 richest owners in the NFL are discussed.

Who Are The Richest NFL Owners Currently?

Rob Walton, who is also the CEO and heir to Walmart, has an estimated net worth of around $60 billion, and purchased the Denver Broncos in 2022 for $4.6 billion, the largest amount ever spent to purchase a sports team. This makes him by far the richest owner in the NFL. Not only was Rob the heir to Walmart, but he also was intimately involved in the operations of Walmart and was the chairman of the company from 1992-2015. Along with his Walmart earnings, Walton owns a 25.5% share of Arvest Bank, the largest bank in Arkansas.

Tepper has been the owner of the Carolina Panthers since 2018, and his net worth is estimated to be around $16.7 billion. He earned the vast majority of his wealth by founding his own hedge fund, Appaloosa Management. In 1993, Tepper was frustrated while working for Goldman Sachs after he was constantly overlooked when promotions to partner were being offered. This caused him to leave the company, and he eventually decided to start Appaloosa Management, which quickly became one of the most successful hedge funds in the United States.

Jerry Jones has owned the Dallas Cowboys since 1989, and his net worth is estimated to be around $11.7 billion. In addition to the wealth he has obtained from owning the Cowboys, Jones has also earned some of his wealth from his business ventures. He was an Executive Vice President of Modern Security Life, an insurance company based in Springfield, Massachusetts. His main source of wealth, however, was his Jones Oil and Land Lease company. The company searches for natural gas and oil throughout his native Arkansas.

One of the most successful owners in the NFL, New England Patriots owner Robert Kraft is the fourth-richest owner, with a net worth of around $8.3 billion. Since Kraft purchased the Patriots in 1994, the team has won six Super Bowls, the most in the league over that stretch. In addition to the Patriots’ success on the field, Kraft has had success in business off the field. The majority of his wealth came from his personal company, The Kraft Group, of which he is both chairman and CEO. The company holds assets for investors in all sorts of areas, including paper and real estate.

Owner of the Miami Dolphins since 2008, Stephen Ross has a net worth of approximately $8.2 billion. Ross’s wealth mostly came from “The Related Companies,” an organization of which he is the founder, chairman, and majority owner. The Related Companies are a global real estate development firm, most well-known for helping create New York’s Time Warner Center and Hudson Yards. Ross also owns stakes in several brands, including Milk Bar, Blink Fitness, Pure Yoga, SoulCycle, and the Miami Open.

Having an estimated net worth of $7.3 billion, Shahid Khan has owned the Jacksonville Jaguars since 2012. Taking a little bit of a different path business-wise than most of his fellow owners, Khan’s wealth came mostly from his car bumpers company. While he was an engineering director for Flex-N-Gate, a car manufacturing company, he started his own car bumper company called Bumper Works. Bumper Works took off so quickly that Khan eventually bought out Flex-N-Gate and used it to supply his car bumpers. Eventually, Bumper Works became the largest supplier of car bumpers in the United States and is now the sole supplier of car bumpers to Toyota.

The seventh-richest owner in the NFL, Arthur Blank’s net worth is around $7.6 billion. Blank has been the Falcons’ majority owner since 2002. Blank’s most successful business venture has been his co-founding of home improvement retail giant the Home Depot. Prior to founding the Home Depot, Blank had been the Vice President of Finance for the Handy Dan Improvement Centers. After a falling-out with the board of the company, however, both he and CEO Bernard Marcus were released. The two decided to pair up and start the Home Depot together, and the success of their company has now far surpassed that of Handy Dan.

Taking the eighth spot on this list is Baltimore Ravens owner Stephen Bisciotti, with a net worth estimated to be around $5.8 billion. Bisciotti bought 49% of the Ravens in 2000 and then purchased the rest of the team in 2004. As for his major business successes, Bisciotti and his cousin launched a company called Aerotrack together from their basement. The company is a staffing company that supplies staff for businesses in the technology and aerospace sectors. Eventually, Aerotek became the multi-million-dollar company that is the Allegis Group, which today is the largest staffing firm in the United States.

Checking in at number nine on this list is Buffalo Bills owner Terry Pegula, with a net worth of around $5.8 billion. Terry and his wife Kim have owned the Bills since 2014, and his net worth is about the same as Stephen Bisciotti. Terry’s success in the business industry started with his East Resources natural gas drilling company.  Additionally, he purchased Pennzoil Assets, a brand of motor oil, to help build his wealth.  In 2010, he sold his East Resources company for $4.7 billion, proving just how much it has grown under his supervision and leadership.  In addition to the Bills, Pegula owns Buffalo’s other major sports franchise: the Buffalo Sabers hockey team.

The last owner on this list and the only female, Janice McNair is the owner of the Houston Texans and has a net worth of $4.2 billion. Janice is one of four female majority owners in the NFL, along with Gayle Benson (New Orleans Saints), Virginia Halas McCaskey (Chicago Bears), Sheila Firestone Ford Hamp (Detroit Lions), and Amy Adams Strunk (Tennessee Titans). Janice assumed the role of owner for the Texans in 2018 after her husband and then-owner Robert McNair passed away. Janice and Robert helped to co-found the Texans as an NFL expansion team, and they began playing in the league in 2002.

Who is the richest NFL team owner?

As was mentioned above, the richest owner in the NFL is Rob Walton, owner of the Denver Broncos. Walton’s net worth is estimated at over $60 billion, by far the richest in the league (David Tepper is second at $16.7 billion). The majority of his wealth is the result of him being the heir to Walmart, which was started by his father, Sam Walton. Rob Walton was the chairman of Walmart for 23 years, from 1992-2015.

Who is the youngest NFL team owner?

Currently, the youngest NFL owner is Michael Bidwill, who is the owner, president, and chairman of the Arizona Cardinals. Bidwill is 53 years old, born on April 20, 1969. Bill inherited the team after his father and then-owner Bill Bidwill passed away in 2019. The team has been in his family since 1933, when his grandfather bought the team. For comparison with Bidwill, the oldest team owner in the NFL is Virginia Halas of the Chicago Bears, who is 99 years old.