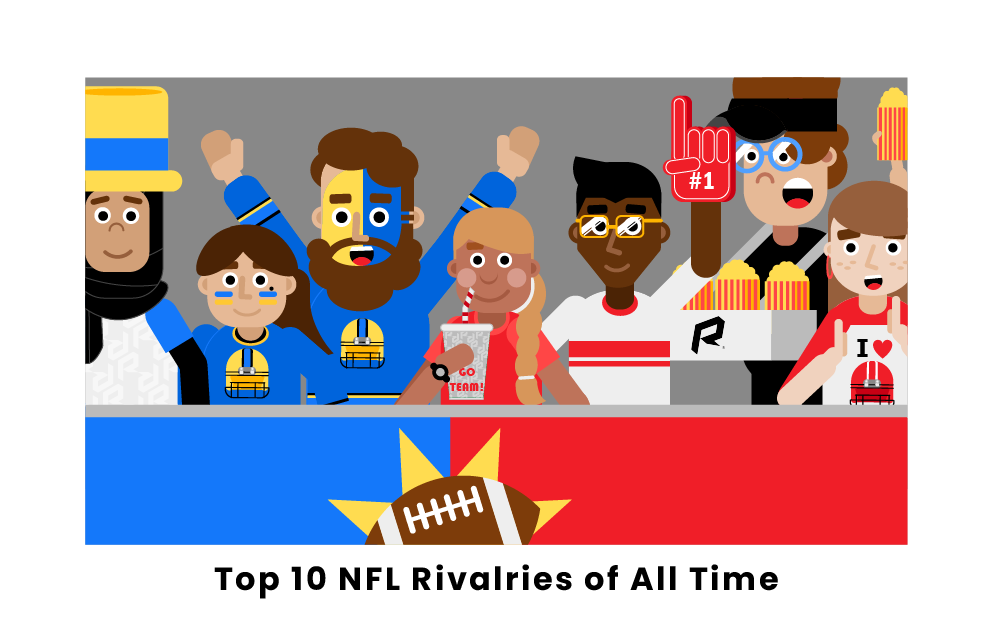 After its creation over a century ago, the National Football League (NFL) has continuously evolved and added a number of teams throughout the years. Over time, many of these teams have battled against one another frequently and formed intense rivalries that remain to this day.

What are the Biggest NFL Team Rivalries of All Time?

The Dallas Cowboys and Philadelphia Eagles have faced one another countless times, beginning in 1960 when the Cowboys joined the NFL. On January 11, 1981, the two teams faced one another for the first time in the NFC Championship game, where the Eagles defeated the Cowboys 20-7 and advanced to the team’s first Super Bowl appearance. Throughout the history of this matchup, numerous famed players have competed, including Roger Staubach, Emmitt Smith, Terrell Owens, Randall Cunningham, Donovan McNabb, and Brian Dawkins. Both members of the NFC East Division, the opportunity for several divisional and conference titles has come down to the matchup between these two teams.

The rivalry between the Green Bay Packers and the Chicago Bears is the oldest existing rivalry in the NFL, dating back to their first meeting in 1921. In 1941, the Bears and Packers competed in the NFL’s first divisional playoff game, where the Bears won 33-14. Since then, the competitive nature between these two teams has continued to grow, producing some of the league’s most loyal and ruthless fanbases. The Packers and Bears have played one another more than any other pair of NFL teams. Their games take place at two of the most historic stadiums in professional sports, Lambeau Field in Green Bay and Soldier Field in Chicago.

The Pittsburgh Steelers and Baltimore Ravens have rivaled one another for over 26 years. The two teams first met on September 8, 1996, where the Steelers won the game by a score of 31-17. Since then, these two teams have become some of the fiercest competitors in the Northeast, with many legendary players and coaches between them, such as Terry Bradshaw, Joe Greene, Ben Roethlisberger, Mike Tomlin, Ray Lewis, and Ed Reed. Both teams compete in the AFC North division and have played in numerous memorable games to fight for division and conference titles. Although it is one of the younger rivalries in the NFL, the already bitter nature between these two teams proves that it is one that will endure long into the future.

The rivalry between the New York Giants and the Philadelphia Eagles began on October 15, 1933, in a blowout game where the Giants won by a score of 56-0. Both teams are members of the NFC East division, creating high stakes each time they compete against one another. This matchup has a history of “miracle” plays, including Desean Jackson’s 2010 punt return that resulted in a last-second game-winning touchdown for the Eagles. Furthermore, the rivalry has allowed some of the league’s best players to shine, including Lawrence Taylor, Donovan McNabb, and Brian Westbrook.

The rivalry between the Washington Commanders and the Dallas Cowboys began on October 9, 1960, when the Commanders (then named the Redskins, a name later changed to avoid racist connotations towards Native Americans) defeated the Cowboys 26-14. Both teams are members of the NFC East division. They have faced one another twice per regular season since 1967, intensifying the nature of the rivalry. Throughout the years, both teams have appeared in numerous Super Bowls and have one of the most successful championship track records of any two teams from the same division.

The rivalry between the Las Vegas Raiders and the Kansas City Chiefs began in 1960, with the Chiefs defeating the Raiders 34-16. Since then, the Raiders have played the Chiefs more times than any other team in the league. Both teams were original charter members of the American Football League when it began in 1960, and since then, the Raiders and Chiefs have joined the AFC West division. The Raiders have played in three different locations, including Oakland, Los Angeles, and now Las Vegas, while the Chiefs originated as the Dallas Texans. Although both teams have experienced their fair share of relocations, the intense rivalry between them has never faltered.

The Green Bay Packers and Minnesota Vikings met for the first time in 1961 and quickly became rivals for years to come. In their first meeting, the Packers came out strong in the second half, blowing out the Vikings by a score of 33-7. Since then, the two teams have frequently fought back and forth for control of the rivalry and the NFC North Division. Many prominent players have competed in this matchup, including Aaron Rodgers, Adrian Peterson, Randy Moss, Randall Cunningham, and Brett Favre, the latter of whom played for both teams during his time in the league.

The rivalry between the New England Patriots and the New York Jets began in 1960 in a heated battle, where the Patriots forced a fumble with 12 seconds left and returned it for a game-winning touchdown. There have been several memorable moments throughout their rivalry, including “Spygate,” a game in 2007 where the Patriots won but were later proven guilty of videotaping the Jets’ defensive signals. Another unforgettable moment, now known as the “Butt Fumble,” occurred on Thanksgiving Day when Jets’ quarterback Mark Sanchez tried to scramble but instead ran into the rear end of linemen Brandon Moore and fumbled the ball.

The Washington Commanders and New York Giants first played in 1932, with the Commanders winning the game 14-6. Between 1937 and 1939, the two teams competed all three years in the Eastern Conference Title Game. Both teams currently reside in the NFC East division and have played one another countless times, including the highest-scoring game in NFL history in 1966 when the teams combined for a total of 113 points. This rivalry has generated high levels of physicality between both teams, such as when Giants’ Lawrence Taylor viciously tackled Washington quarterback Joe Theisman, snapping both his tibia and fibula.

The New England Patriots and New York Giants first faced one another in 1970, but it was not until two of the more recent yet most memorable Super Bowls that their rivalry was born. In the 2007 season, the undefeated Patriots faced off against the Giants in the Super Bowl and were heavily favored to win the game. However, Giants wide receiver David Tyree made a miraculous catch, pinning the ball against his helmet, setting the Giants up to win the game 17-14. A few years later, the two teams met in Super Bowl XLVI, where star quarterbacks Eli Manning and Tom Brady battled once again. The Giants defeated the Patriots by a score of 21-17, adding another Super Bowl victory to fuel this intense rivalry.

Located in Atlanta, Georgia and Charlotte, North Carolina, the Falcons and the Panthers are natural rivals not only due to their shared division (the NFC South), but also their proximity. The teams’ stadiums are separated only by a four-hour trip on Interstate 85 (leading to the rivalry being named “The I-85 Rivalry”). Notable moments in the rivalry have included the Falcons’ 20-13 victory over Carolina on December 27, 2015, in which Atlanta shattered the Panthers’ 14-0 record (only the fourth 14-0 start in NFL history), dropping them to 14-1. Famed players and coaches from the rivalry have included Cam Newton, Matt Ryan, Julio Jones, Luke Kuechly, John Fox, and Mike Smith.

Called the “Battle of Ohio,” the rivalry between the Cincinnati Bengals and the Cleveland Browns is a classic regional and divisional beef. Both teams are located in Ohio, and both compete in the AFC North. Neither team has a reputation for dominance in the league, leading any edge in the rivalry to be hard-fought and well-celebrated. The teams first played in 1970 when Cincinnati joined the division following the AFL merger. The Bengals maintain a slight lead in the series, and they have never met in the playoffs. Both teams have seen increased success in recent years, only adding to the rivalry.

The rivalry between the Seattle Seahawks and the San Francisco 49ers is a newer rivalry that developed in 2002. That season, the Seahawks were moved into the NFC West following a restructuring, ensuring multiple meetings every year. The rivalry intensified in the early 2010s when the teams hired rival college coaches Pete Carroll (Seattle) and Jim Harbaugh (San Francisco). The teams met once in the playoffs, in the 2013 NFC Championship game, which Seattle won 23-17. The Seahawks also maintain a considerable lead in the series, adding bitterness to the rivalry.

What is the biggest NFL rivalry?

The biggest NFL rivalry is between the Dallas Cowboys and the Philadelphia Eagles, two teams that are both in the NFC East division. The two teams have played each other countless times since their first meeting in 1960 and have battled back and forth for years to control the rivalry. During the 1970s, the Cowboys dominated and became known as “America’s Team.” Since then, the Eagles have made a name for themselves and even won the Super Bowl in the 2017 season.

What is the oldest NFL rivalry?

The oldest NFL rivalry is between the Green Bay Packers and Chicago Bears. Since both teams are in the NFC North division and are among the oldest teams in the league, it is the most-played rivalry in league history. This has created fierce competition between the two organizations, building much anticipation and excitement every time the two teams face off. The rivalry has been filled with many notable coaches and players, including Vince Lombardi, Mike Ditka, Aaron Rodgers, and Walter Payton.

What NFL rivalry has met in the Super Bowl the most?

The New England Patriots and New York Giants are the rivalry that has met in the Super Bowl the most. The two teams have played in two Super Bowls: Super Bowl XLII on February 3, 2008, and Super Bowl XLVI on February 5, 2012. Both games proved to be nail-biters and came down to clutch plays late in the game. The Giants came out victorious in both matchups, winning the first Super Bowl 17-14 and the second one 21-17.

Pages Related to Top 10 Biggest NFL Rivalries of All Time