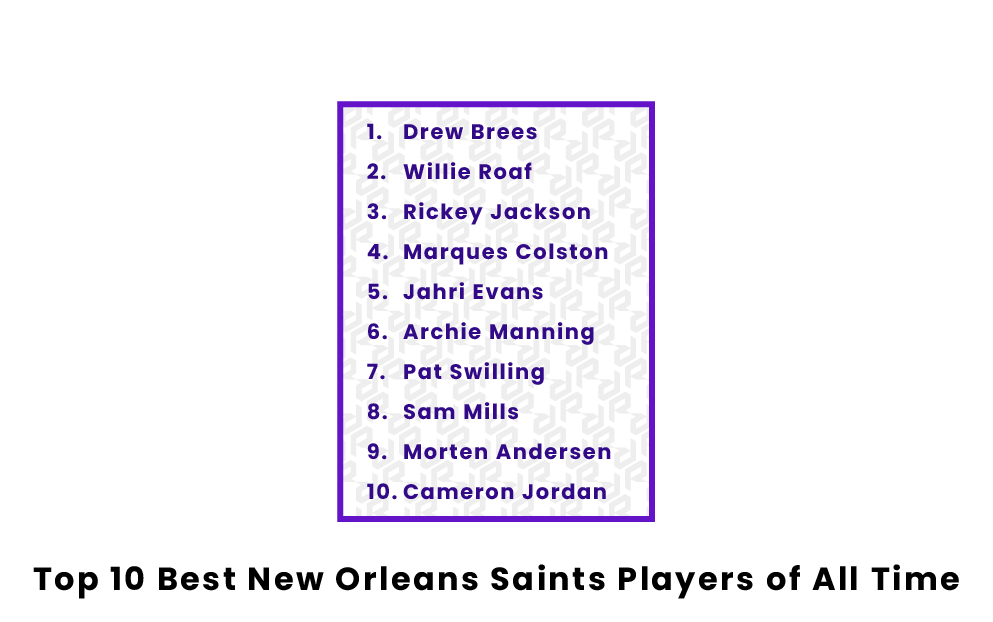 As Louisiana is one of the biggest states for football in the country, the New Orleans Saints have been delighting their fandom with many legendary moments over the years and a Super Bowl win in 2009. Over the decades, the Saints have made themselves known for their great offense and their grit and character, let’s take a look at the top 10 Saints players of all time!

Who are the Best New Orleans Saints Football Players of All Time?

After a four-year stint with the San Diego Chargers, Drew Brees left California in the 2006 free agency to join the New Orleans Saints. There, Brees went from being an injury-prone quarterback in an average offense to becoming one of the greatest players in NFL history. In his fourth season as a Saint, Brees led his team to the first Super Bowl win in franchise history after beating the Indianapolis Colts 31-17, and brought home the Super Bowl MVP. Brees took the Saints to the playoffs nine times in 15 seasons, reaching the NFC Championship game three times.

Drew Brees made it to the Pro Bowl 13 times and was selected five times to the All-Pro team. The Purdue alum also holds countless NFL records, besides being the franchise leader in every single quarterback stat for the Saints. Brees has the highest completion percentage in NFL history and is second all-time in passing yards.

Alabama native Willie Roaf is a true legend in Louisiana. After four years at Louisiana Tech, Roaf was selected eighth overall by the New Orleans Saints to fill a huge void in their offensive line. In nine seasons with the Saints, Willie Roaf became the backbone of the offense and one of the biggest idols in New Orleans. Roaf became a Saints legend thanks to his durability and reliability, as he only missed 13 regular-season games in his nine years in Louisiana. As a member of the Saints, Roaf became one of the best offensive tackles in the league, making it to both the 1990s and the 2000s NFL All-Decade Team. Throughout his career, the former Louisiana Tech Bulldog was selected 11 times to the Pro Bowl, six times to the First-Team All-Pro and three times to the Second-Team All-Pro.

While they never made it past the NFC Wild Card Game, the late 1980s and early 1990s Saints were one of the toughest opponents to face in the NFL thanks to their linebacker line. The line included middle linebackers Sam Mills and Vaughan Johnson and outside linebackers Pat Swilling and Rickey Jackson. Pittsburgh alum Rickey Jackson was the star of the Dome Patrol and the longest-tenured out of the four.

A Hall of Famer, Jackson is a true legend of the game. Throughout his career with the New Orleans Saints, Jackson took part in the Pro Bowl seven times and was voted into the Second-Team All-Pro five times. He also led the league in forced fumbles four times. In 195 games as a Saint, Rickey Jackson had 38 forced fumbles, 123 sacks and 1,104 tackles, as he was constantly one of the best outside linebackers in the NFL.

Over their 55 years in the National Football League, the New Orleans Saints have had some of the most dominant wide receivers in the game, such as Michael Thomas, Ted Ginn Jr. and Joe Horn. However, none of them tops Super Bowl XLIV Champion Marques Colston. Marques Colston came into New Orleans as a semi-unknown prospect, as the Saints picked him up in the seventh round of the 2006 NFL Draft. Although the Hofstra alum has never made it to either the Pro Bowl or any of the All-Pro teams, he was able to amass almost 10,000 yards in his ten year stint in Louisiana.

Almost every New Orleans Saints wide receiver record has Marques Colston’s name written next to it. Colston holds the franchise record for total scrimmage yards as a wide receiver, total touchdowns, receptions and seasons with over 1,000 rushing yards, including the 2009 season when he helped win the Saints their first and only Super Bowl title.

Jahri Evans was another crucial piece of the offense that led the New Orleans Saints to their first Super Bowl title in the 2009 season. Drafted out of Bloomsburg in the fourth round of the 2006 NFL Draft, Evans spent 11 seasons in Louisiana, missing only seven regular-season games due to injury. Evans quickly established himself as one of the best guards in the NFL, as he was voted into the First-Team All-Pro four times and once into the Second Team. The Philadelphia native was also a six-time Pro Bowler and a member of the NFL 2010s All-Decade team.

In 2010, the Saints handed Evans a seven-year, $56 million extension, which at the time made him the highest-paid guard in the history of the league. After his retirement, the Saints honored him by inducting him into their Hall of Fame and their Ring of Honor.

Selected second overall in the 1971 NFL Draft, Archie Manning came into the NFL after a great career at Ole Miss, where the school retired his #18 jersey. After his four years as an Ole Miss Rebel, the 1969 SEC Player of the Year kept on displaying his greatness as a member of the Saints. Archie Manning spent 11 seasons in Louisiana, putting up over 21,000 yards and 115 touchdowns despite missing the whole 1976 season due to a shoulder injury.

As the first member of the greatest quarterback family in the history of the NFL, Archie Manning was a two-time Pro Bowler and won the NFC Player of the Year award in 1978. The mediocrity of his team never allowed him to reach the playoffs, however, though Manning was still inducted into the Saints Hall of Fame and the Saints Ring of Honor.

Despite being the member of the Dome Patrol that played the least amount of time with the Saints, Pat Swilling is one of the greatest players to have ever worn a Saints jersey. Swilling was drafted by the Saints in the third round of the 1986 NFL Draft after a standout career at Georgia Tech, where he graduated being the all-time leader in sacks at the time.

During his seven-year stint as a New Orleans Saint, Swilling was a four-time Pro Bowler and four-time All-Pro (twice in the First Team). During the 1991 season, Pat Swilling led the league in sacks with 17, earning him the NFL Defensive Player of the Year Award. Swilling finished his Saints career with 354 tackles, 76.5 sacks and 24 forced fumbles. The Georgia native is enshrined in the New Orleans Saints Hall of Fame and Ring of Honor.

Sam Mills was the star of the middle linebacker duo of the legendary Dome Patrol unit. The former #51 was a true hidden gem, as he went undrafted in the 1981 NFL draft after a four-year career at Montclair State University. Mills’ journey to the NFL was unusual and filled with challenges, as he spent the first five years after college between the Canadian Football League and the defunct United States Football League. In 1986, he was finally able to make it to the NFL, as he was signed by the New Orleans Saints. He went on playing nine years for the Saints, making it to the Pro Bowl five times and three times to the All-Pro teams (once in the First Team). Sam Mills finished his Saints career with over 900 tackles, 10.5 sacks and 16 forced fumbles, and three defensive touchdowns.

Danish kicker Morten Andersen is not only the greatest kicker that ever played for the Saints, but also one of the best in the history of the NFL. Andersen was drafted by New Orleans in the fourth round in 1982, being one of the few great kickers to be selected in the NFL Draft. Mortensen spent 13 seasons in New Orleans and was voted five times to the All-Pro Team, four of which in the first team, and seven times to the Pro Bowl. He is also a member of the 1980s NFL All-Decade Team and the 1990s NFL All-Decade Team. “The Great Dane” holds the NFL record for the most games played with 382 over 25 seasons. He also has the highest-ever streak of consecutive scoring games, with 360, and has scored 2,544 points in his career, which is the second-highest amount in NFL history.

Defensive end Cameron Jordan closes out the top 10 of the greatest players in Saints history. He was the 24th pick of the 2011 Draft after four years at the University of California, Berkeley. Jordan joined the Saints in 2011 and had an instant impact on a franchise that was going through a rebuilding process after winning the Super Bowl in 2009. In his second season, he recorded 67 tackles, which is the highest tally he has reached in his career, and in 2013 he made it to his first Pro Bowl. Cam Jordan is a seven-time Pro Bowler, and was selected to the All-Pro Team three times, one of which to the first team in 2017. He has 112.5 sacks, 146 tackles for loss, 14 forced fumbles, and two interceptions in his career. Jordan is also a member of the NFL 2010s All-Decade Team.

Who is the best New Orleans Saints quarterback of all time?

Drew Brees is the best New Orleans Saints quarterback of all time. A one-time Super Bowl champion, Brees is also one of the greatest players in the history of the game. He played 15 seasons in New Orleans, winning the NFL Offensive Player of the Year Award twice, and led the league seven times in passing yards and four times in touchdowns. He is the quarterback with the highest career completion percentage in the history of the league, and holds every major Saints quarterback record.

Who is the best New Orleans Saints running back of all time?

The Saints have had many dominant running backs in their history, including Alvin Kamara, Deuce McAllister and Dalton Hilliard. However, 2009 Heisman Trophy winner Mark Ingram II is considered as the greatest running back in Saints history. As a member of the New Orleans Saints, Mark Ingram made the Pro Bowl twice, rushing for 6,500 and scoring 52 touchdowns. Ingram also has almost 2,000 receiving yards as a Saint.

Who is the best New Orleans Saints wide receiver of all time?

Among the many great receivers that the Saints have had, Marques Colston is the greatest in franchise history. The 2009 Super Bowl Champion holds the franchise record for career receptions, receiving yards, total yards from scrimmage and total touchdowns as a wide receiver.