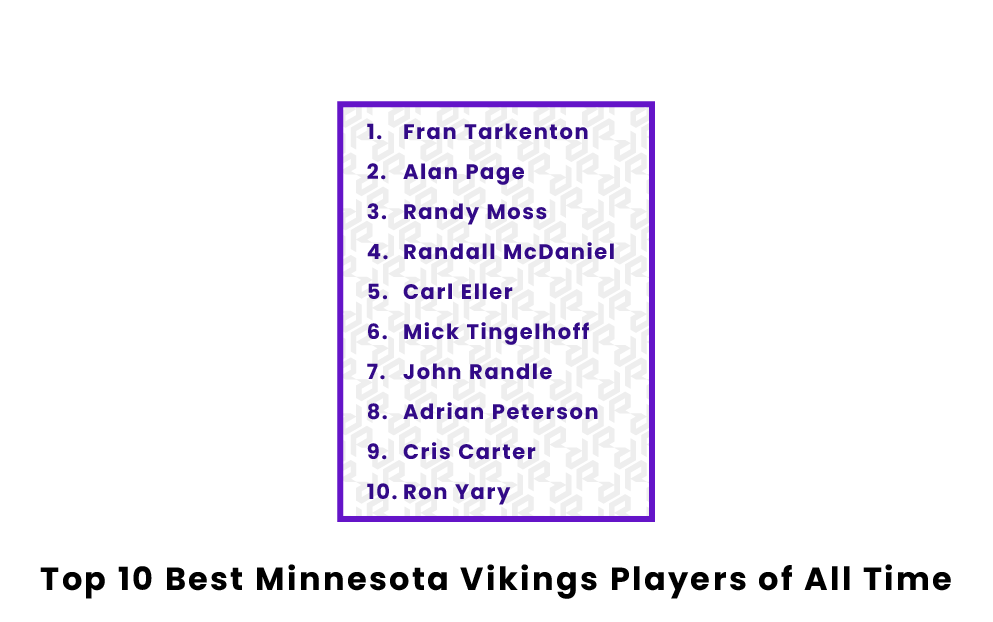 Despite their 4-0 Super Bowl record, the Minnesota Vikings have a long history of legendary players. They hit their true stride in 1967 with Hall of Fame coach Bud Grant and are known for their dominating defensive line known as the “Purple People Eaters” and a slew of versatile athletes who redefined the bounds of their positions and earned hall of fame recognition. Listed below are the top ten best Minnesota Vikings players of all time.

Who are the best Minnesota Vikings football players of all time?

Fran Tarkenton was born in Richmond, Virginia, on February 3, 1940. He played for the University of Georgia and was drafted to the Vikings in 1961 when the team was just getting its start. He became their starting quarterback in his rookie season and began a relentless career that landed him in the history books and at the top of our list. In his first game, he made history as the only NFL quarterback to pass for four touchdowns during their first start and led the Vikings to a legendary win. Over the next several seasons, even as the Vikings struggled to find their footing, Tarkenton continued to prove his merit. He earned his reputation as “The Scrambler” because, in an era when it was practically taboo, Tarkenton was unafraid to run for the ball. Despite excelling, Tarkenton was traded to the New York Giants in 1967.

Tarkenton’s eventual return to the Vikings in 1972 brought even more success. He played another seven years and led the Vikings to six NFC Central Division titles and three of their four Super Bowls. He played in nine Pro Bowls, and in 1975, he secured both the NFL’s MVP and Offensive Player of the Year Award. He retired at the peak of his career in 1978 and held every significant NFL passing record, and still ranks in the top ten for many. Tarkenton was the first Viking ever to be inducted into the Hall of Fame and is recognized for his skill, consistency, and innovation as one of the greatest QBs of all time.

Born August 7, 1945, in Canton, Ohio, Alan Page was a first-round draft pick from Notre Dame in 1967. His philosophy was that “a defensive player should think of himself as an aggressor, not as a defender.” He was a key element of the notorious “Purple People Eaters” defensive line and a nightmare for opposing teams.

Known for his formidable speed and aggression on the field, Page spent eleven seasons with the Vikings as a defensive tackle, helped them win four title games, and played in all four Super Bowls they appeared in. He was awarded Defensive Player of the Year in 1971 and 1973, selected nine consecutive times for the Pro Bowl, and made history in 1971 as the first defensive player to be named MVP. After his retirement in 1981, Page began a career in law and was elected to the Minnesota Supreme Court.

Randy Moss was born in West Virginia on February 13, 1977, and was a first-round draft pick from Marshall University in 1998. He played with the Vikings for seven seasons as a wide receiver from 1998-2004 and for a brief stint in 2010, setting records and collecting accolades along the way.

While he earned a reputation for his tumultuous personal life and numerous legal battles, his formidable speed, athleticism, and talent are undeniable. His skill kept him on the field even when his reliability was brought into question. He was voted AP Offensive Rookie of the Year, selected for six Pro Bowls, and chosen for the 2000s NFL All-Decade Team. At the time of his retirement, he ranked third and fourth in NFL history with 982 receptions for 15,292 yards and 156 touchdowns.

Randall McDaniel was born December 19, 1964, in Phoenix, Arizona, and spent four years as a starter at Arizona State. He was drafted in the first round by the Vikings in 1988 as an offensive guard. He played this position immaculately but was also so versatile a player that he was utilized in unconventional ways. In the 1996 Pro Bowl, he made history as the first guard to catch a touchdown pass. Over his fourteen-season career, he had a 202-game starting streak, was selected for the Pro Bowl twelve consecutive times, and was nominated to the 1990s All-Decade Team.

He retired in 2001 after playing a final season with the Tampa Bay Buccaneers and got licensed to work in the Minnesota Elementary school system helping mentor disadvantaged children in his community, a cause he was passionate about throughout his football career. Fans and peers regard him as one of the best offensive linemen in the league, and he has been applauded throughout his career for his athleticism, leadership, and character.

Carl Eller was born January 25, 1942, in Winston-Salem, North Carolina, and attended college at the University of Minnesota. He was a first-round draft pick in 1964 for both the Vikings and their rivals, the Buffalo Bills, but made the decision to stay in Minnesota and began a fourteen-year career with them that ended in 1978. During that time, he became a crucial element of the Vikings’ famed defensive line.

Eller is credited with the most sacks in Viking history, and, despite his 6’6” 247 lb frame, possessed surprising speed and agility. He started as a defensive end in every Super Bowl they played in and helped the Vikings win ten NFC titles during his eleven seasons. After retiring, he secured a degree in human services and became a licensed drug and alcohol counselor, advocating for people of color within the Minnesota Department of Human Services.

Mick Tingelhoff was an undrafted free agent when he started in his rookie season with the Vikings at center, a position he maintained over his exemplary 17 seasons, and earned him recognition as one of the best the NFL has ever seen. He was known as much for his consistency as his stature and grit. He never missed a game over the span of his lengthy career and started in a consecutive 240 regular-season games. He took on some of the NFL’s best linebackers and was a highly skilled blocker, helping teammates like Fran Tarkenton and Chuck Foreman make their way into the record books.

He even helped push the Vikings to all four of their Super Bowl appearances and four championship victories, playing in the Vikings’ most successful era and demonstrating an impeccable work ethic and sportsmanship. Tingelhoff passed away in 2021 at the age of 81, and his dedication, skill, leadership, and stellar function as a teammate are his legacy.

John Randle was born on December 12, 1967, in Hearne, Texas, and was an undrafted free agent when he signed with the Vikings in 1990. He proved his merit over time, beginning a 176 consecutive-game streak with 133 straight starts in 1992. It wasn’t until around 1996, though, that he truly came into his own. He adopted intimidation tactics, trash-talking, and a larger-than-life presence on the field that waged absolute psychological warfare. His signature face paint became part of this persona, and he played with guts and abandon that rallied his teammates and terrorized opponents.

In 1997 he led the NFL with 15.5 sacks, and a year later signed a $32.5 million dollar contract with the Vikings, the largest contract for a defensive lineman up to that point. He spent eleven seasons with the Vikings, played in seven Pro Bowls, and finished the last couple years of his career with the Seattle Seahawks before retiring in 2003, and is remembered for his energy as a true defensive force.

Adrian Peterson was born on March 21, 1985, in Palestine, Texas. He played at the University of Oklahoma, where he made history as the runner-up for the Heisman trophy as a freshman and was the Vikings’ first-round draft pick in 2007. He made a name for himself immediately, setting the NFL record for most rushing yards in a single game (296) in his very first season, earning himself Rookie of the Year in 2007. He played ten seasons with the Vikings, made over 1,400 yards in a season three different times, won MVP in 2012, and played in seven Pro Bowls.

Off the field, however, he was troubled and faced child abuse charges in 2014. He received only a brief suspension during his legal battle and continued to play with the Vikings until 2016 before signing a contract with the New Orleans Saints. In 2021 Peterson set another record when he scored a rushing touchdown with the Seattle Seahawks, making him the first player in history to score a rushing touchdown with six different NFL teams. Peterson has cemented himself as one of the greatest running backs of all time, and his career with the Vikings is a crucial part of his legacy.

Cris Carter was born November 25, 1965, in Troy, Ohio, and played college ball at Ohio State University. After some legal trouble and a devastating end to his promising college career, the wide receiver found himself in the supplemental draft, where he was selected by the Philadelphia Eagles. He was eventually cut from the Eagles after failing several drug tests. In 1990 the Minnesota Vikings signed Carter off waivers for $100 and offered him the opportunity to get sober and redeem his NFL career.

He rose to the occasion with grace, demonstrating determination and discipline over his 12 seasons. He played in eight consecutive Pro Bowls and was selected for the 1990s All-Decade team. In 2002, at the time of his retirement, he was the NFL’s second all-time leading receiver, held 19 team records for the Vikings, 1,101 receptions for 13,899 yards, and 130 touchdowns. His career is not only a testament to his skill but the gratification of hard work and discipline.

Ron Yary was born on July 16, 1946, in Chicago Illinois, and was the first player selected by the Vikings in the 1968 AFL-NFL draft. He spent fourteen years with the Vikings and played starting right tackle from his second season on.

His size and aggression on the field,paired with his intelligence and agility, made him the ideal offensive lineman. He was known to play through injuries and only missed two games throughout his career. He played in all four of the Vikings’ Super Bowl appearances and helped the team win two NFL Central Division titles, three NFC titles, and nine NFC Central championships. Known for his strength and endurance, Yary is widely considered the Vikings’ greatest defensive tackle of all time.

Who is the best Minnesota Vikings quarterback of all time?

When it comes to the greatest Vikings quarterback, Fran Tarkenton tops just about every list. He is considered the best quarterback the franchise has ever seen, and he led the team to three Super Bowls during his latter seven years with them. He played for the Vikings from 1961 to 1966 and then again from 1972 to 1978 and was a dominant force in both stints. When he retired, he held every major passing record, had played in nine Pro Bowls, won MVP (1975) and Offensive Player of the Year (1975), and was inducted into the Hall of Fame in 1986. He is still regarded as one of the best QBs in the league.

Who is the best Minnesota Vikings running back of all time?

The best Minnesota Vikings running back of all time is Adrian Peterson. He played with the Vikings from 2007 to 2016, barring a brief suspension in 2014 when he pleaded no contest to a charge of misdemeanor reckless assault against his then-four-year-old son. Despite his questionable judgment off the field, Peterson’s skill as a running back is undeniable. He holds the record for most rushing yards in a single game, was Best Offensive Player of the Year in 2012, and MVP in 2013, and ranks among some of the greatest running backs of all time.

Who is the best Minnesota Vikings wide receiver of all time?

The best Minnesota Vikings wide receiver is Randy Moss. He’s a hall of famer and widely considered one of the best in the league. Moss played with the Vikings from 1998-2004 and again for a year in 2010. He was voted NFL Offensive Rookie of the Year in 1998, played in six Pro Bowls, and was named to the All-Decade Team of the 2000s.

Pages Related to Top 10 Minnesota Vikings Players of All Time