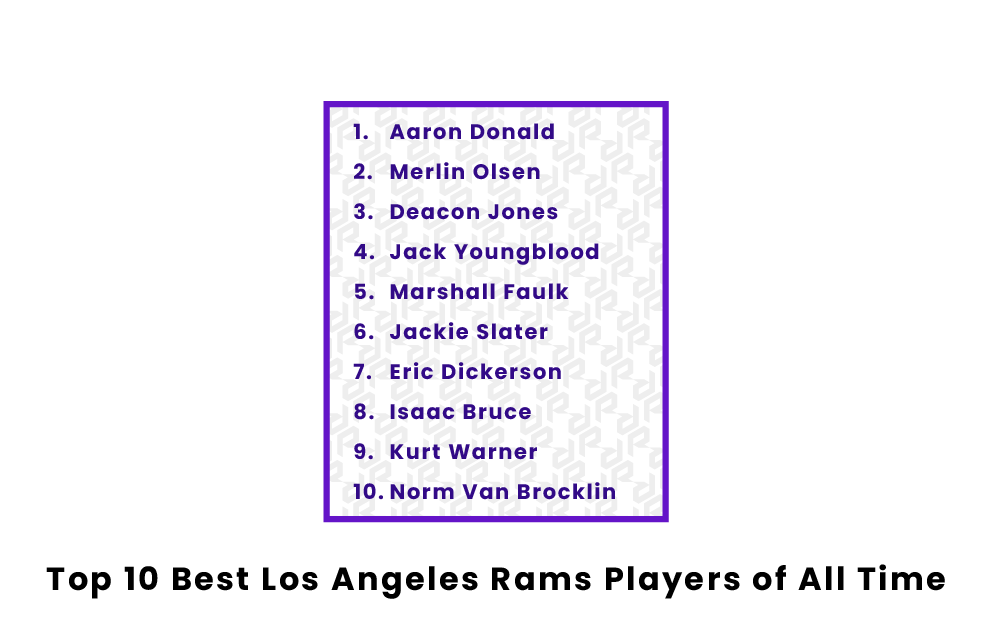 Whether playing in St. Louis or Los Angeles, the Rams have always had some of the best talents in the league, as shown by the four NFL championships (two in the Super Bowl era) won during their long history. Let’s find out who the best ten Rams of all time are!

Who are the best Los Angeles Rams football players of all time?

As a three-time NFL Defensive Player of the Year and one-time Super Bowl champion, Aaron Donald’s name is in the mix for the title of best defensive player in NFL history. Since he was drafted by the Rams in 2014, the Pittsburgh alum has taken the league by storm, becoming a threat to any quarterback.

The mix between strength, quickness, and a great capacity to read the offense makes Aaron Donald a freak athlete that has helped the Rams to go from a losing team to Super Bowl Champions. His resilience and leadership have become a game changer for the Rams as he played through injuries in several playoff games.

In nine seasons as a pro, Aaron Donald has been selected seven times to the First-team All-Pro and eight times to the Pro Bowl. Aaron Donald was also the NFL sacks leader in 2018 and is part of the NFL 2010s All-Decade Team.

After a three-year career as a standout at the University of Utah, Merlin Olsen was picked second overall in the 1962 NFL Draft by the Los Angeles Rams. Olsen had an immediate impact on the Rams, winning the NFL Rookie of the Year award in 1962.

Despite playing only nine playoff games in fifteen years in Los Angeles, Olsen formed one of the greatest defensive lines in the history of the game. They were even known as the “Fearsome Foursome” and were made up of Olsen himself and then Deacon Jones, Lamar Lundy, and Rosey Grier. In four years as the star of that defensive line, Olsen recorded an impressive twenty-seven sacks and had four fumble recoveries.

Throughout his NFL career, Olsen was selected fourteen times to the Pro Bowl and made the All-Pro Team ten times, six of which were in the First-team. The Utah graduate was also included in the NFL 1960s and 1970s All-Decade Teams and had his jersey hung up in the rafters by the Rams.

Merlin Olsen’s sparring partner in the “Fearsome Foursome,” Deacon Jones closes out the podium of the three greatest Los Angeles Rams players of all time. Beyond being one of the best defenders in the history of the game, “The Secretary of Defense” is also one of the greatest draft steals ever, as he was selected by the Rams in the fourteenth round of the 1961 NFL Draft.

Although NFL analysts only started officially tracking sacks in 1982, Deacon Jones was one of the best ever at quarterback hits, leading the NFL in sacks five times. The Mississippi Valley State graduate also won the NFL Defensive Player of the Year in 1967 and 1968 and was a five-time First-team All-Pro, and was selected eight times to the Pro Bowl. Deacon Jones made it to the NFL 1960s All-Decade team alongside his teammate Merlin Olsen and is also part of the NFL 75th and 100th Anniversary teams.

As the members of the “Fearsome Foursome” started retiring or switching franchises, the Los Angeles Rams had the task of rebuilding what had been the best defensive line in the 1960s NFL. Thus, they decided to draft University of Florida standout Jack Youngblood with the twentieth pick of the 1970 NFL Draft and made him the cornerstone of their new defense.

Youngblood immediately started dominating once he came into the league, keeping the great legacy of the “Fearsome Foursome” going strong. With him leading the defense, the Rams reached the playoffs in ten of his fourteen seasons in Los Angeles and even made it to Super Bowl XIV, which they lost against the Pittsburgh Steelers.

Over his fourteen-year career as a member of the Rams, Youngblood led the league twice in sacks and was an eight-time All-Pro (five in the First-team) and a seven-time Pro Bowler. The Hall of Famer is also part of the NFL 1970s All-Decade Team.

Marshall Faulk is not only the greatest running back in Rams history but also one of the best to ever do it in the NFL. The San Diego State alum and 1994 NFL Offensive Rookie of the Year is the only running back to win the NFL MVP in Rams history, as he brought home the trophy in 2000.

After four years with the Indianapolis Colts, the team that drafted him second overall in 1994, Faulk was traded to the Rams in 1998, who were playing in St Louis during those years. His impact was immediate as he won the NFL Offensive Player of the Year award in his first three seasons in Missouri. His third season as a member of the Rams was his best ever as he won the NFL MVP, led the league in rushing touchdowns and points, and played a crucial role in the franchise’s first Super Bowl title.

Although he was not as flashy as Marshall Faulk or as dominant as Aaron Donal, “Big Bad Jackie” Slater is among the most-loved players in Rams history. The Mississippi native was drafted in the third round of the 1976 NFL Draft and went on to play 20 seasons for the Rams, establishing the all time NFL record for most seasons played by an offensive lineman for one franchise.

Reliability, great strength, and durability were what made Jackie Slater a Hall of Famer and the player with the most games and seasons played with the Rams royal blue and gold. In his 20 seasons as a Rams player, Slater reached the playoffs ten times and was elected to the Pro Bowl seven times and four times to the Second-team All-Pro. Jackie Slater is also one of the eight players to have his jersey retired in the history of the franchise, as the Rams hung up his number 78 to the rafters in 1996.

Much like Marshall Faulk, Erick Dickerson is not only a Rams legend but also one of the greatest running backs in NFL history. Although he only played five out of his twelve seasons as a pro with the Rams, Dickerson beat many records in Los Angeles and took the team to the playoffs four years in a row.

Erick Dickerson was drafted second overall in 1983 and immediately became a nightmare for any defense, winning the NFL Offensive Rookie of the Year award and establishing the league’s record for most rushing yards in a rookie season. The SMU graduate then went on to win the NFL Offensive Player of the Year award and led the NFL in rushing yards for four of his five seasons in Los Angeles. Dickerson is a five-time First-team All-Pro, a six-time Pro Bowler, a member of the NFL 100th Anniversary team, and the holder of the all-time record for most rushing yards in a single season.

Drafted in 1994 by the Los Angeles Rams, Isaac Bruce is among the top offensive players in the history of the Rams. As the franchise moved to St. Louis after his rookie season, Bruce became one of the leaders of “The Greatest Show on Turf,” the Rams’ offense that broke many records from the 1999 and to the 2001 seasons and that won Super Bowl XXXIV.

In fourteen seasons between Los Angeles and St. Louis, Bruce picked up over 14,000 total scrimmage yards, leading the league in receiving yards in 1996 and making the Pro Bowl roster four times. Isaac Bruce is also in the top five for receiving yards in NFL history and has the franchise record for receptions, receiving yards, and touchdowns. He also has the highest amount of receiving yards in the playoffs and the most receiving touchdowns in a single game in Rams history.

Often regarded as one of the best undrafted players in NFL history, Kurt Warner was the quarterback of “The Greatest Show on Turf,” leading that offense to a win in the XXXIV Super Bowl, where he was also awarded the MVP.

Kurt Warner played four years at Northern Iowa before going undrafted in 1994. He then spent three years in the Indoor Football League and one in NFL Europe with a Rams futures contract. In 1999, he finally earned his chance to start with the Rams and took the league by storm right away, winning the NFL MVP, leading the league in passing touchdowns, and making it to the First-Team All-Pro all in his first full season. After winning the Super Bowl in 2000, Warner repeated the success of his first season in 2001 when he won the MVP, led the league in passing touchdowns, and was selected to the First-team All-Pro again.

With two NFL Championships (one during his time with the Rams), Norm Van Brocklin is one of the greatest quarterbacks of the pre-Super Bowl era. After spending four years at the University of Oregon, Norm Van Brocklin was drafted by the Los Angeles Rams in the fourth round of the 1949 NFL Draft.

Van Brocklin spent nine years in Los Angeles, taking the Rams five times to the playoffs, including a win in the 1951 NFL Championship Game against the Cleveland Browns to give the franchise their second title after the one in 1945. The South Dakota native threw for over 16,000 yards and had 118 scores with the Rams while making the Pro Bowl six times and the Second-Team All-Pro three times. Norm Van Brocklin also led the league in passing yards in 1954 and is part of the NFL 1950s All-Decade Team.

Who is the best Los Angeles Rams quarterback of all time?

With two NFL MVPs and one Super Bowl title under his name, Kurt Warner is the greatest quarterback in Rams’ history. During his time in St. Louis, he led “The Greatest Show on Turf,” one of the most spectacular offenses in the Super Bowl era. Kurt Warner was also a two-time First-team All-Pro and NFL passing touchdowns leader in his stint with the Rams.

Who is the best Los Angeles Rams running back of all time?

Super Bowl XXXIV champion Marshall Faulk is the greatest running back in Rams history. The New Orleans born was a one-time MVP and a three-time NFL Offensive Player of the year in his seven seasons in St. Louis. Over their eighty-six years of history, the Rams have had a great running back tradition having had stars like Todd Gurley II, Steven Jackson, and Erick Dickerson wear the royal blue and gold.

Who is the best Los Angeles Rams wide receiver of all time?

The third member of the big three of “The Greatest Show on Turf,” Isaac Bruce, is the greatest wide receiver in the history of the Rams franchise. After playing fourteen seasons in St. Louis, Isaac Bruce broke almost every wide receiver record for the Rams. He left the Rams in 2008 as a Super Bowl champion and as their all-time leader in receiving yards, receiving touchdowns, and receiving yards in the postseason.