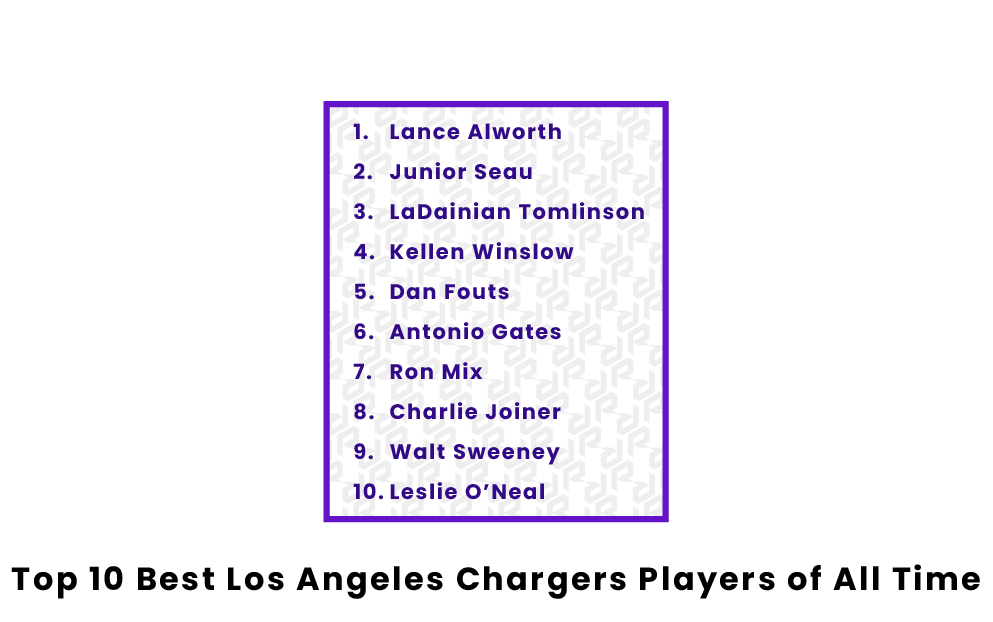 The Los Angeles Chargers, formerly known as the San Diego Chargers until their move was announced in 2017, are a franchise that got their start in professional football in 1961. As such, they’ve had more than their fair share of talent on their roster, which earned them a total of 10 divisional championships in the AFC West. These 10 players are the best to have ever worn the iconic lightning bolt jersey.

Who are the Best Los Angeles Chargers Football Players of All Time?

Lance Alworth was one of the Chargers’ first true star players, and in fact, one of the first true star players of the NFL. Alworth played for the Chargers between 1962 and 1970. The NFL-AFL merger occurred in 1966, so Alworth found much of his early success in the AFL, where put together a career rich with accolades and awards. Alworth won the AFL Championship (essentially the precursor to the Super Bowl) with the Chargers in 1963. That was also the year that Alworth won AFL Player of the Year, which he won thanks to his 1,205 receiving yards and 11 touchdowns in only 14 games. For this era in the NFL, those were some truly strong numbers, but they wouldn’t even be Alworth’s best. His best season was in 1965, when he went for 1,602 receiving yards and 14 touchdowns. Alworth was truly ahead of his time, which is why he’ll be remembered as one of the best receivers in NFL history, and why he was selected for the Pro Football Hall of Fame.

Junior Seau is by far the best defensive player to have ever put on a Chargers uniform. He played linebacker for the team between 1990 and 2002, and proved to be an enormously consistent and skilled player. As a result, he amassed six appearances on the First-Team All-Pro list, with his first coming in 1992 and his last in 2000. He also secured three Second-Team appearances. And between 1991 and 2002 (his entire time with the Chargers, except for his rookie season), Seau made a whopping 12-straight Pro Bowls. It was this remarkable consistency and excellence that earned him a spot on the NFL’s All-Decade team for the 1990s. He finished his career with 1,849 tackles, 56.5 sacks, 18 interceptions, 11 forced fumbles, and a lone touchdown. He was elected to the Los Angeles Hall of Fame, along with the Pro Football Hall of Fame.

LaDainian Tomlinson is one of the most iconic names in the canon of great NFL running backs, and for good reason. Tomlinson was one of the most electrifying running backs to ever step onto a professional football field. Among Tomlinson’s many achievements, he was named both Offensive Player of the Year and Most Valuable Player in 2006. He was also named a First-Team All-Pro three times, and saw his name added to the Second-Team in an additional three years. He was named to five Pro Bowls and was included on the NFL’s All-Decade team for the 2000s. Tomlinson is also famous for one of the most statistically absurd rushing seasons ever recorded. In 2006, Tomlinson recorded 1,815 rushing yards, 508 receiving yards, 28 touchdowns on the ground (which stands as the most in a single season), and three receiving touchdowns. And as if that wasn’t enough, he also threw for 20 yards and a touchdown to make it an even 30 total touchdowns scored by Tomlinson on the season, which made him a shoe-in for MVP and Offensive Player of the Year and the Hall of Fame.

Kellen Winslow was an incredibly talented tight end for the Los Angeles Chargers. Winslow played for the team between 1979 and 1987, which comprised the entirety of his career in the National Football League. But in those seasons, Winslow managed to make quite the impression on the league, as he made the First-Team All-Pro list in three consecutive seasons between 1980 and 1982. He also made the Second-Team during his last season in the NFL. Winslow made five total Pro Bowls and twice led the league in receptions by a tight end, both in 1980 and 1981. As a result of these dominant seasons throughout the 1980s, he was named to the All-Decade team for the 1980s. He played only 109 games in his career, but managed 6,741 receiving yards in those games, which averages out to just over 61 yards per game. It’s why he’s since been inducted to the Pro Football Hall of Fame.

Dan Fouts was the franchise quarterback for the Chargers for 15 seasons between 1973 and 1987. Fouts managed to secure the NFL’s Offensive Player of the Year Award in a strike-shortened 1982 season in which only nine games were played. But in those nine games, he threw for 2,883 yards and 17 touchdowns, both of which led the league. He actually led the league in passing yards in every season between 1979 and 1982. He was also the passing touchdown leader in 1981 and 1982. Fouts was an extremely consistent force at the quarterback position, as evidenced by being named twice to the First-Team All-Pro list, and six total Pro Bowls. That consistency is also why he was one of the names added to the NFL’s All-Decade team for the 1980s. Since his exit from professional football, Fouts’ #14 jersey has since been retired by the Chargers, and he was elected to the Professional Football Hall of Fame in 1993.

Antonio Gates has gone down as one of the best tight ends in the history of the NFL thanks to his consistent playmaking ability. Gates was named to the First-Team All-Pro list in three straight seasons between 2004 and 2006. In those three seasons, he managed 2,989 receiving yards along with 32 touchdowns. After his 16 seasons in the National Football League, all of which were spent with the Chargers, Gates finished with an impressive 955 receptions for 11,841 yards and 116 touchdowns. He led the league in receiving yards by a tight end three times, and in receiving touchdowns five times. He currently holds the record for most career touchdowns by a tight end. It was this degree of excellence which earned Gates his eight Pro Bowl appearances and a spot on the NFL’s All-Decade team for the 2000s. Once his eligibility starts for Hall of Fame voting, it’s more than likely that he’ll be selected for a spot in the Pro Football Hall of Fame.

Ron Mix was one of the best offensive lineman to have ever played for the Chargers. He played offensive tackle for the team between 1960 and 1969, which means that most of his career with the team was spent in the AFL pre-merger. However, he found great success with the team in the AFL, winning the AFL Championship in 1963. The game was a true blowout, as the Chargers beat the Boston Patriots 51-10. Mix was one of the most consistent players on the roster, as he made nine All-AFL lists, all of them in consecutive years between 1960 and 1968. In the 1960’s, he was undeniably one of the best offensive linemen in the entire AFL. He was also named an AFL All-Star eight times and was selected for the AFL All-Time team, which recognizes the AFL’s best players of all time. After his retirement, he was selected to the Pro Football Hall of Fame.

Charlie Joiner was yet another legendary wide receiver who played for the Chargers. Joiner first put on a Chargers jersey in 1976 after already having played in the NFL for seven seasons. He would end up playing for the Chargers for an additional 11 seasons, and they were some of his best work on a football field. In his first season with the Chargers, Joiner recorded the first 1,000-yard receiving performance of his career when he went for 1,055 yards and seven touchdowns. That season he was also named a Second-Team All-Pro and was selected for the Pro Bowl. Joiner would go on to have three more seasons where he tallied more than a thousand yards receivings. By the end of his lengthy career, he had amassed 12,146 yards through the air along with 65 receiving touchdowns. This consistent output of yardage and touchdowns is why he was selected for the Pro Football Hall of Fame.

Walt Sweeney was another extremely successful and extremely consistent offensive lineman for the Chargers. He was a guard that played for the team between 1963 and 1973. In his first season in professional football, Sweeney helped the team to an AFL Championship win over the Boston Patriots. In the following years, he would really find his stride as an offensive lineman by being a First-Team All-Pro in two separate seasons (1967 and 1968), along with being selected to nine Pro Bowls, which were in consecutive seasons between 1964 and 1972. He was also named to the Second-Team All-Pro list four times: once in 1965 and then in the seasons between 1969 and 1971. For his efforts, he was given plenty of accolades after his retirement. For one, he was named to the AFL All-Time second team. Within the Chargers organization, he was named to their Hall of Fame, along with their being selected for their 50th Anniversary Team.

Leslie O’Neal was a versatile defensive player for the Chargers, playing both outside linebacker and defensive end. He was selected by the Chargers as the eighth overall pick in the 1986 NFL draft, and would go on to play for the team until 1995. O’Neal displayed a tremendous ability to rush the quarterback, which is why he was awarded Defensive Rookie of the Year in 1986. In that season, O’Neal managed to record 12.5 sacks in a season that was ultimately cut short by injury. In one game against the Cowboys that season, O’Neal actually recorded five sacks. He continued his success in the league in the years that followed by making three Second-Team All-Pro lists and six Pro Bowls. He was incredibly consistent, as evidenced by him leading the team in sacks for six straight years between 1990 and 1995. As a result, O’Neal has since been named to the Los Angeles Chargers Hall of Fame, and was also included on their 50th Anniversary Team list.

Who is the best Los Angeles Chargers quarterback of all time?

Dan Fouts is by far the best Los Angeles Chargers quarterback in history. Fouts stacked up a mountain of awards and accolades during his time in the NFL, all of which was spent with the Chargers. He won Offensive Player of the Year in 1982, was a First-Team All-Pro in 1979 and 1982, and was named to six total Pro Bowls. He also led the NFL in passing yardage in four consecutive years, and in passing touchdowns in two seasons.

Who is the best Los Angeles Chargers running back of all time?

The best running back in Chargers history, and in the history of the NFL, is LaDainian Tomlinson. Some of the accolades that Tomlinson managed to amass during his career in professional football include a Most Valuable Player award, NFL Offensive Player of the Year, three First-Team All-Pro appearances, and five Pro Bowls. He also put together one of the best single-season rushing campaigns of all time with 1,815 rushing yards and 28 touchdowns on the ground.

Who is the best Los Angeles Chargers wide receiver of all time?

Lance Alworth is not only the best Chargers wide receiver of all time, he’s one of the best to have ever played the position in the history of professional football. Alworth helped the Chargers win the AFL Championship in 1963 and was named AFL Player of the Year for that season. He was a six-time First-Team All-Pro and totaled just over 10,000 yards receiving and 85 touchdowns in his career. His number has been retired by the Chargers and his name sits amongst those in the Professional Football Hall of Fame.