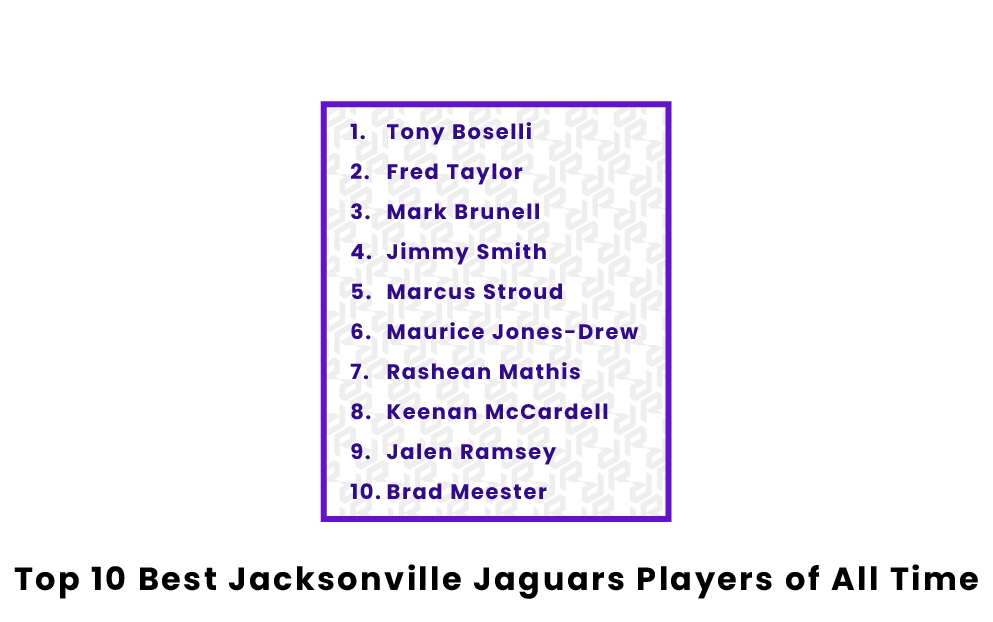 Though the Jacksonville Jaguars are one of the NFL’s newer teams, they have a fair share of legendary players who helped define football’s modern era. Listed below are the best players ever to represent Duval County.

Who Are the Best Jacksonville Jaguars Football Players of All Time?

In 2022, former offensive lineman Tony Boselli became the first ever Jaguar inducted into the Pro Football Hall of Fame. Originally out of USC, he also became the first ever Jaguars draft pick when he was drafted second overall in 1995. Though a slew of injuries cut his career short after just seven seasons, the left tackle made the Pro Bowl in five of them and was named a First-Team All-Pro in three straight years from 1997 to 1999. The early Jaguars rose to prominence earlier than anyone expected them to, thanks to several offensive weapons who were difficult to defend against. If it weren’t for Boselli’s world-class blocking for the quarterback and running back, the late 90s-early 2000s Jags would likely have never reached the AFC Championship Game twice in four seasons.

Fred Taylor is the best running back in Jaguars history. A Florida man through and through, Taylor was born and raised in Pahokee, played college football for the Gators, and was drafted in the first round by the Jaguars in 1998. Taylor broke 1,000 rushing yards in a season seven times, including in 2000 when he reached 1,399. He was patient and steady, getting big runs through holes while only fumbling the ball a meager 13 times in his 11-season Jaguars career.

Rushing wasn’t all Taylor could do, as he was a capable receiver who gave his quarterback short options to go with the excellent wide receiver tandems downfield. That Fred Taylor made his first and only Pro Bowl in his tenth season at age 31 speaks both to his staying power and the lack of appreciation for him during his career. Had he been on a bigger market team, his accolades likely would have piled up much higher.

Mark Brunell remains the most accomplished quarterback in Jaguars history. The Washington alum was actually drafted late by the Green Bay Packers in 1993. While the Packers saw him as a backup quarterback for Brett Favre, the Jaguars saw a potential franchise QB in Brunell and made their first ever trade in 1995 to land the strong, agile passer.

The California native Mark Brunell holds the franchise record for nearly every positive QB stat. He’s also play-called in some of the Jaguars’ most memorable games, such as in the 1996 Divisional Round against the heavily favored Denver Broncos. Brunell went 18-for-29 for 245 yards, two touchdowns, and no interceptions in Mile High Stadium, outdueling the legendary John Elway in an upset for the ages. Brunell would go on to win Super Bowl XLIV with the New Orleans Saints, backing up Drew Brees.

Jimmy Smith earned two Super Bowl rings with the Cowboys before getting his first NFL reception in Week 9 of the Jaguars’ inaugural season. By the time of his retirement, Jimmy “Lightning” Smith’s record 12,287 receiving yards with Jacksonville nearly doubled the totals of the next-best player.

Cut loose from two different NFL rosters due to unfair treatment of his health issues, Smith joined the Jaguars and became one of the NFL’s most consistently dangerous receivers. Only Randy Moss and Jerry Rice exceed Smith’s nine seasons posting at least 1,000 receiving yards. Smith is honored as part of Jacksonville’s “Pride of the Jaguars,” but the Pro Football Hall of Fame has eluded him. This has led sports writers like Tom Pelissero to deem him one of the most underrated wideouts of all time.

Standing at 6’6” and wearing number 99, Marcus Stroud was an unmatched defensive powerhouse for the Jaguars. The left defensive tackle out of the University of Georgia was drafted thirteenth overall in 2001 by Jacksonville, where he was paired with fellow DT John Henderson in what was one of the more formidable defensive duos in the NFL.

When Stroud played, the Jaguars completely shut down the run. Calling a passing play meant putting the quarterback in the path of two DTs who combined for 51 sacks in their Jaguars careers. Three consecutive Pro Bowls from 2003 to 2005 proved that in Stroud’s prime, he was a consistent, durable left tackle feared by all the offenses who had to face him.

Maurice Jones-Drew is one of the best running backs to ever have worn the Jaguars jersey. He was drafted out of UCLA in 2006, in the twilight of Fred Taylor’s iconic career. Succeeding Taylor as the Jaguars’ running back, Jones-Drew had big shoes to fill – especially since he was listed as just 5’7” compared to Taylor’s 6’1” frame. Fortunately for Jacksonville, “MJD” emerged as a star in his own right.

The California-born Jones-Drew, compared to Taylor, relied less on his strength and more on efficiency, finding holes quickly and running through them even faster. Unlike Taylor, MJD was given proper acknowledgment during his career, making three consecutive Pro Bowls from 2009 to 2011. 2011 was Jones-Drew’s signature season, leading the league with 1,606 rushing yards and getting a nod as a First Team All-Pro.

Rashean Mathis, who attended college at Bethune-Cookman in Florida, went on to be the best cornerback in Jaguars history. No other Jaguar has more than half of Mathis’ record 30 interceptions for Jacksonville. He was a force on the Jaguars for the entire 2000s, but his 2006 season stands out head and shoulders as his best.

Mathis recorded eight interceptions and was credited with 12 passes defended en route to his first and only Pro Bowl and selection as a First-Team All-Pro. In the seasons after, opposing QBs were wary of throwing to players whom Mathis was covering, so his numbers dropped dramatically. However, Mathis still made several big plays, including a pivotal pick-six against the Steelers in the 2007 AFC Wild Card game.

The most prolific wide receivers in NFL history usually come in pairs because two dynamic playmakers on one offense are harder to contain than one. While Jimmy Smith may hold all the Jaguars records, his teammate and friend Keenan McCardell was a perfect complement to him on one of the best receiver tandems of the 90s.

McCardell and Smith were known together as “Thunder and Lightning,” with McCardell being the “thunder” half. He made bold catches up the middle and was a reliable ball carrier who rarely fumbled. Smith’s Jaguars numbers may be much higher than McCardell’s, but McCardell only spent six of his 17 pro seasons in Jacksonville. The former UNLV Rebel went on to win Super Bowl XXVII with the Tampa Bay Buccaneers further south in Florida. Though the “Thunder and Lightning” storm didn’t roll for very long in Jacksonville, the pair of wideouts brought the Jaguars to two conference finals in four years.

Jalen Ramsey’s short, tumultuous time with the Jaguars established him as one of the league’s best cornerbacks. Drafted fifth overall in 2016 out of Florida State, the Tennessee-raised Ramsey immediately burst onto the scene, finishing second in voting for Defensive Rookie of the Year. Along with defensive end Yannick Ngakoue and linebacker Myles Jack, Ramsey’s coverage propelled the Jaguars to a surprising AFC Championship appearance in 2018, just his second season of NFL play.

Unfortunately, as the Jaguars’ fortunes quickly dried up, Ramsey ran into disagreements with his coaches. After holding out for a trade from Jacksonville, he got moved to the Los Angeles Rams, where he’s shown off his defensive versatility. Though his Rams career is even more accomplished, getting two extra All-Pro nods and a Super Bowl championship, his crucial role in Jacksonville’s deep 2018 playoff run makes him a top-ten player in Jaguars history.

Longtime Jaguars center Brad Meester never made a Pro Bowl, nor was he active during a particularly good stretch for Jacksonville. However, Meester spent his entire 14-season career snapping the ball to Jaguars QBs, which is worth celebrating for a team that’s historically struggled to keep its best players around.

Meester’s origins are entirely midwestern, as he was born in Iowa and played college ball for the Northern Iowa Panthers. Once he got drafted by Jacksonville in 2000, though, he never played for an NFL team outside of Duval County, Florida. His 209 Jags games played are 38 clear of late bloomer Jimmy Smith for most ever played in the teal, gold, and black.

The steady career of Brad Meester had a poetic end. In his last ever home game, he caught his first ever NFL pass, muscling out nine yards for a first down.

Who is the best Jacksonville Jaguars quarterback of all time?

The best quarterback in Jaguars history is Mark Brunell. At the helm of Jacksonville’s offense in the late 1990s to early 2000s, he’s remained the most consistent QB in Jaguars history, and games like his playoff duel with John Elway won’t be forgotten by Duval faithful.

Though Trevor Lawrence has seen great improvement in his first two years as the Jaguars play-caller, it’s too early to tell what his Jaguars career may look like well into the future.

Who is the best Jacksonville Jaguars running back of all time?

This question is hotly debated over whether Fred Taylor or his successor Maurice Jones-Drew deserves to be called the best ever Jags’ running back. Both men had different skill sets, which they utilized for excellent careers. Due to Taylor putting an expansion team on the map far earlier than expected, Fred Taylor is often considered just over MJD.

Who is the best Jacksonville Jaguars wide receiver of all time?

The Jaguars' best ever wide receiver is Jimmy Smith. The “Lightning” half of the late-90s “Thunder and Lightning” duo holds nearly every Jaguars’ receiving record, including receiving yards and touchdowns. While Keenan “Thunder” McCardell was just as good, if not better than Smith during their time together in Jacksonville, Smith spent his entire prime in teal and is much more closely associated with the Jaguars, who honor him as part of the exclusive “Pride” in TIAA Bank Stadium.

Pages Related to Top 10 Jacksonville Jaguars Players of All Time