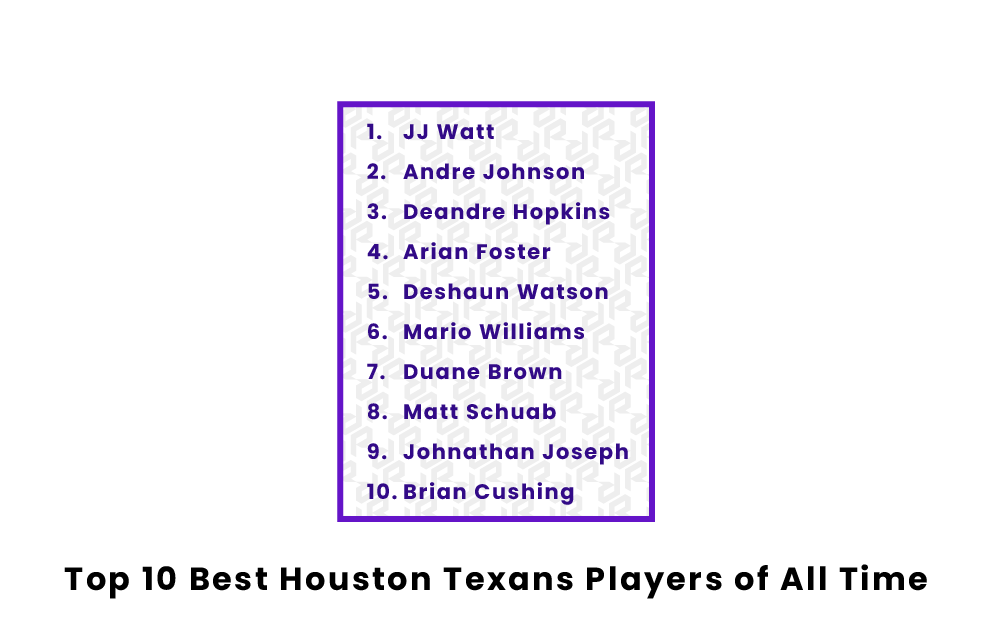 The Houston Texans are one of the newer franchises in the NFL, and they have had moderate success since they were established in 1999. However, they have produced some exceptional players in the team’s short history. Below are the top 10 Houston Texans players of all time and the accolades they achieved while on the team.

Who are the best Houston Texans football players of all time?

JJ Watt was arguably the best player to ever wear a Houston Texans jersey. They selected him eleventh in the first round of the 2011 NFL draft out of Wisconsin. As a defensive end, Watt played ten seasons with the Texans (2011-2020), and he dominated on and off the field. He had 101 career sacks with the Texans, which is the most in team history. He also holds the team record for most forced fumbles and most fumbles recovered.

Watt won three Defensive Player of the Year awards (2012, 2014, 2015), joining Aaron Donald and Lawrence Taylor as the only players to win at least three. He has appeared in five Pro Bowls and made first-team All-Pro five times as well. Off the field, he also won the Walter Payton Man of the Year award for helping raise around $40 million to help out the victims of Hurricane Harvey, which destroyed a lot of the Houston area. JJ Watt had an amazing career with the Texans and now currently plays for the Arizona Cardinals.

Andre Johnson was a remarkable wide receiver for the Houston Texans. They selected him third overall in the 2003 NFL Draft out of the University of Miami. Johnson played twelve seasons with the team from 2003 to 2014, where he was one of the best wide receivers in the league. He made the most pro bowls in Texans’ team history with seven. He led the league in both receptions and receiving yards in 2008. He also led the league in receptions in 2006 and receiving yards in 2009. Johnson had seven 1,000-yard seasons and finished his time with the Texans with 13,597 yards, 64 touchdowns, and 1,012 receptions. These are all team records. He finished his career 11th all-time in receiving yards and 11th all-time in receptions. He is a member of the Texans Ring of Honor. He retired in 2016 after spending time with the Colts and Titans in the 2015 and 2016 seasons.

Deandre Hopkins was an impressive wide receiver for the Houston Texans in the late 2010s. They selected him 27th overall in the 2013 NFL draft out of Clemson. Hopkins played seven seasons for the Texans from 2013 to 2019. During that time, he was one of the league's best receivers. He made four pro bowls with the Texans and a fifth with the Arizona Cardinals. He is also a five-time All-Pro player, including three first-team appearances and two second-team appearances.

Hopkins led the league in total receiving touchdowns in the 2017 season (with 13). Hopkins was always able to stay on the field, as he only missed two games in his seven seasons. He has broken the Texans’ team single-season record for receiving touchdowns multiple times. He is crawling up the all-time rankings as he currently ranks 30th in receptions, 37th in receiving yards, and 47th in receiving touchdowns. Hopkins still has at least a few more seasons left to become an all time leader. He was traded to the Arizona Cardinals in 2020 and plays there today.

Arian Foster was the best running back to ever wear the Houston Texans jersey. Foster went undrafted and signed with the Texans in 2009. He played seven seasons for the team from 2009 to 2015 and was one of the most dominant running backs of the early 2010s. Despite being undrafted, Foster was selected to four Pro Bowls. He had three All-Pro appearances, including two first-team and one second-team.

Foster led the league in rushing touchdowns in 2010 and 2012, as well as in rushing yards in 2010. His 2010 season was one of the best seasons for a running back in NFL history, where he ran for 1,616 yards and 16 touchdowns. Both are single-season records for the Texan team. Foster finished his career with the Texans recording 1,454 rushing attempts, 6,472 rushing yards, and 54 rushing touchdowns. His prime was very short due to multiple injuries. He appeared in one final season with the Miami Dolphins in 2016 and has not played since.

Deshaun Watson was the best quarterback in Houston Texan history. He was drafted by the Texans twelfth overall in the first round of the 2017 NFL draft out of Clemson. He played four seasons for the team and sat out for an additional season due to multiple accusations of sexual assault. As soon as he took the field as a rookie, He made an immediate impact. His season was cut short due to a torn ACL. After that, he made three straight pro bowls in 2018, 2019, and 2020. He even led the league in passing yards in 2020.

In 2019, Watson recorded the most completions with a perfect passer rating (28). He led the Texans to the playoffs two different times and won an exciting overtime game in the wildcard round versus the Buffalo Bills. He did not win any other games with the team. He threw for 14,539 yards and 104 touchdowns in his time with the Texans. He was traded to the Cleveland Browns for the 2022 season and has a long career in the NFL ahead of him.

Mario Williams was a legendary defensive end for the Texans in the late 2000s. He was drafted first overall in 2006 by the Texans from North Carolina State. He was an extremely dominant pass rusher and run defender in six seasons with the team. In 2007, he won the NFL Alumni Defensive Lineman of the Year. He made three all-pro teams, including one second-team appearance with the Texans in 2007. The other two were with the Buffalo Bills later in his career. He also made two pro bowl appearances while he was a Texan.

Williams set and broke almost every defensive record for the Texans. He had 53 sacks, 241 tackles, and 93 quarterback hits. Williams joined the Bills from 2012 to 2015 and played one season with the Dolphins in 2016. He retired after that, capping off a great career that should result in a hall of fame induction.

Duane Brown was a great offensive tackle for the Texans in the early 2010s. He was drafted by the Texans 26th overall in the first round of the 2008 NFL draft from Virginia Tech. He played ten seasons with the Texans from 2008 to 2017. In those seasons, he was one of the best offensive tackles in all of football. He made five Pro Bowl appearances in his career, including four for the Texans. He had a first-team All-Pro appearance in 2012 and two second-team honors in his career. He was the starting left tackle and leader of the offensive line when Arian Foster had his record-breaking 2010 season.

Brown was responsible for blocking for six Texans running backs with 1,000 seasons (four from Arian Foster and one from Lamar Miller and Steve Slaton). He was also protecting Matt Schaub when he led the league in passing yards in 2009. Brown has been the cornerstone of some dominant Texans offenses in the late 2000s and early 2010s. He signed with the Seattle Seahawks in 2017, where he would play five seasons. He is still currently active and plays for the New York Jets at the impressive age of 37.

Matt Schaub was a great quarterback for the Houston Texans in the late 2000s and early 2010s. He was drafted 19th overall in the third round of the 2004 NFL Draft by the Atlanta Falcons from Virginia. He was traded to the Texans in 2007, where he immediately became a starter. He spent seven seasons with the Texans from 2007 to 2013. The acquisition of Schaub was the first time the Texans saw real success. He was responsible for the first 2-0 start in franchise history.

Schaub’s first season with the team was plagued with injuries, and the team only won eight games, but it was the most wins the Texans had ever had in the team’s eight years of being a franchise. Schaub would continue to improve and was selected to his first Pro Bowl in 2009. The same season he led the entire NFL in passing yards and led the team to their first-ever winning season. He made a second Pro Bowl in 2012 and led the team to their first two playoff appearances. Schaub is responsible for 23,221 passing yards and 124 touchdowns as a Texan, which are all team records. He would play seven more seasons after leaving the Texans in 2013 but was always a backup.

Jonathan Joseph was a legendary cornerback for the Houston Texans. He was drafted 24th overall in the first round of the 2006 NFL draft by the Cincinnati Bengals, where he would spend his first five seasons. He played collegiately at South Carolina. He joined the Texans in 2011 and would stay for nine seasons. Joseph established himself as one of the best defensive backs in the league by making the second-team All-Pro in 2011 and getting selected to his first pro bowl. He continued that success in 2012 when he made his only other pro bowl.

The Texans got their first two playoff wins, and Joseph was a major contributor. Despite only making pro bowls in his first two seasons with the team, he was still looked at as one of the better corners in the league. He recorded seventeen interceptions which is a franchise record. He took four of those back for touchdowns and led the Texans in defensive touchdowns. Joseph was released by the team in 2020 due to regression and age. He had two short stints with the Tennessee Titans and Arizona Cardinals before retiring in 2021.

Brian Cushing was the best linebacker in Houston Texan history. He was selected fifteenth overall in the first round of the 2009 NFL draft by the Texans from USC. He would spend his entire career with the team from 2009 to 2017. Cushing made an immediate impact as he won the NFL’s Defensive Rookie of the Year award in 2009 and was also named to his only pro bowl. He made the second-team all-pro in 2009 and 2011.

In eight seasons, Cushing became the franchise’s all-time leader in tackles with 664. He would also get 13.5 sacks and record eight interceptions. Cushing suffered various season ending-injuries and was suspended for the use of performance-enhancing drugs twice. This ruined his legacy a little bit, and he even had his 2009 second-team All-Pro honor stripped from him. Cushing was released in 2017 but would join the team as a strength and conditioning coach for the 2019 and 2020 seasons.

Who is the best Houston Texans quarterback of all time?

Deshaun Watson is the best Houston Texans quarterback of all time. He threw for 14,529 passing yards, 104 touchdown passes, and 36 interceptions in just four seasons with the team. He is responsible for two playoff appearances and one win.

Who is the best Houston Texans running back of all time?

Who is the best Houston Texans wide receiver of all time?

Andre Johnson is the best Houston Texans wide receiver of all time. In his 12 seasons with the franchise, he recorded a whopping 13,597 receiving yards, 64 receiving touchdowns, and 1,012 receptions. As of 2022, these three wide receiver statistics are all current franchise records.

Pages Related to Top 10 Houston Texans Players of All Time