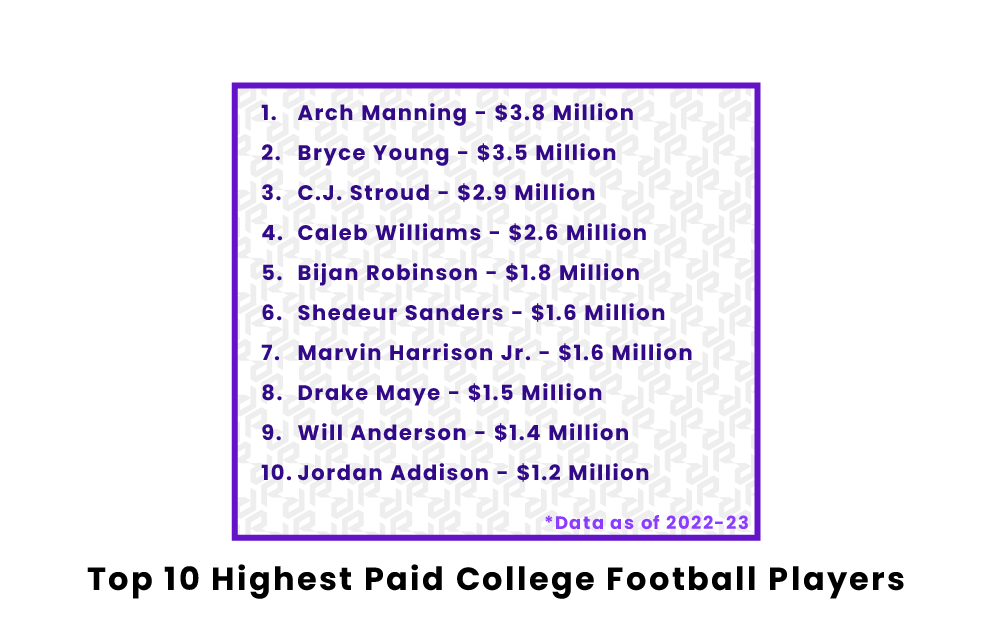 Name, Image, and Likeness (NIL) deals are taking over the world of sports. College athletes can now profit off of their name and make money before going professional. There are so many possible ways for athletes to make money now. The biggest sport for NIL deals is football. Below are the top 10 highest paid college football players.

Who are the highest paid college football players right now?

Bryce Young is the current quarterback at The University of Alabama, and is estimated to make $3.4 million. He won the Heisman Trophy in 2021, declaring him the best player in college football that season. This led to many endorsement deals. He has deals with Beats by Dre, Nissan, Dr. Pepper, Nobull, and Dollar Shave Club. He also charges $9,200 per social media post.

C.J. Stroud is the starting quarterback for Ohio State University, and it is estimated that he makes $2.7 million from all of his endorsements. He is projected to be a top-five pick in the upcoming NFL Draft. He has NIL deals with Dr Teal’s and Kane Footwear, which are both undisclosed deals. He also has an endorsement deal with The Foundation, a company that helps Ohio State players land NIL deals. They have helped Stroud ink deals with Value City Furniture and Designer Shoe Warehouse. He recently promoted Sarchione Auto Gallery, who rewarded him with a $150,000 Bentley. Stroud charges $8,000 per social media post.

Caleb Williams is the starting quarterback at The University of Southern California and is estimated to make $2.4 million from his various endorsement deals. Williams has been very successful at USC so far and is in the running for the Heisman Trophy. He is one of the best quarterbacks in college football and plays for a big-market team. This led to many NIL opportunities for him. He has endorsements with Athletic Brewing Company, Futuremood, Fanatics, Topps, and Hawkins Way Capital. He also has a deal with AC+ION where they work together to raise money for the youth. He makes $5,000 per social media post.

Will Anderson is a linebacker at The University of Alabama with endorsements of about $1.4 million. He is projected to be one of the top picks in the upcoming 2023 NFL Draft, and as the draft approaches, he should get even more opportunities. He has signed many different NIL deals, including with Dr Teal’s, Krystal, Rhoback, and BMW of Tuscaloosa. He charges $2,100 per Instagram post.

Marvin Harrison Jr. is a wide receiver at Ohio State, and it is estimated that he makes $1.4 million from his endorsement deals. He is the son of former Hall of Fame wide receiver Marvin Harrison. His dad's genes and Ohio State's big market have led to him making a large amount of money from NIL deals. His only known deal involves The Foundation, a company that helps players at Ohio State get NIL deals. The rest is undisclosed and not public. He charges $3,000 for every social media post.

Shedur Sanders is the starting quarterback at Jackson State University and is estimated to have made $1.3 million from all of his NIL deals. He is the son of NFL hall of famer Deion Sanders, and his dad is also his coach. Having a famous dad raised his expectations on and off the field. Sanders is the first HBCU athlete to sign an NIL deal. He has signed deals with Gatorade, Tom Brady, PLB Sports, Actively Black, and Mercedes-Benz. He already has over 1,000,000 social media followers and charges $9,100 per post.

Bijan Robinson is a running back at The University of Texas, and it is estimated that he makes about $1.3 million annually from his various NIL deals. He is widely recognized as one of the best running backs in all of college football and should be a top pick in the upcoming 2023 NFL Draft. He has signed a ton of NIL deals, including: Lamborghini Austin, Onyx Authenticated, Rhoback, Candy Digital, and Athletic Brewing Company. He charges $3,200 for each social media post.

Jordan Addison is a wide receiver at the University of Southern California whose NIL deals have allowed him to make around $1.2 million annually. He recently transferred from Pittsburgh, where he was a dominant player. His transfer moved him to California, which had much more opportunity to grow his brand. He works with BLVD LLC, which is a company that helps USC players get endorsement deals, and this has led to deals with United Airlines and Fletcher Jones Motorcars. He also has his own deals with Bowser Automotive and Tickets For Kids.

Drake Maye is the starting quarterback at the University of North Carolina and makes $1.2 million annually from his endorsements. He has some of the highest odds of winning the Heisman Trophy and is regarded as one of the best quarterbacks in college football. He signed with CAA Sports Agency, which helps him get the best deals. It is currently unknown exactly what deals he has signed. He charges $1,200 for each social media post.

Brock Bowers is a tight end at the University of Georgia whose deals have led to him making an estimated $1.1 million annually. He is highly regarded as the best tight end in college football. Bowers is having a great season, which has led to many NIL deals. His first deal was with Associated Credit Union. After that, he signed deals with Zaxby’s, Nobull, and Morgan & Morgan. He charges $1,700 for every social media post.

Who is the highest-paid college football player?

The highest-paid college football player is Bryce Young. He is the quarterback for The University of Alabama. He has deals with Beats by Dre, Nissan, Dr. Pepper, Nobull, and Dollar Shave Club. He also charges $9,200 for a social media post. He is estimated to make $3.4 million annually.