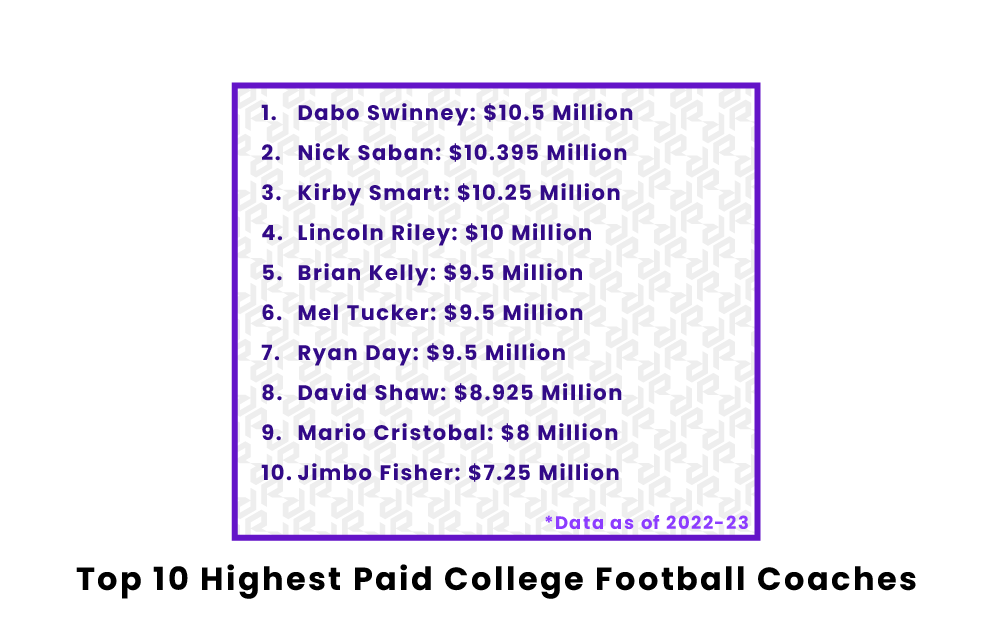 In the world of college athletics, few individuals, if any, are paid more than head football coaches. In particular, the top coaches make a large amount of money. In terms of salary, the top 10 coaches make an average of $9.38 million. Below, those 10 coaches, their salaries, and other facts about them are discussed in detail.

Who Are The Highest-Paid College Football Coaches?

The highest-paid college football coach in the country is Dabo Swinney. The coach at Clemson University, Dabo has a salary of $10.5 million for 2022. Clemson’s success on the field has certainly earned Dabo this distinction. The Tigers have won at least 10 games every year for 11 straight years, and Dabo recently became the sixth-fastest coach of all time to reach 150 career wins. Since he became head coach in 2009, Clemson has won two national championships: one in 2016 and one in 2018.

Nick Saban has the second-highest salary in college football. As the coach of The University of Alabama, Saban has a 2022 salary of $10.395 million. Like Swinney, Saban has the success to back up this salary. In seven of the eight seasons since the inception of the College Football Playoff, Alabama has been in the playoff field. Since Saban came to the school in 2007, Alabama has won six national titles (2009, 2011, 2012, 2015, 2017, 2020).

Kirby Smart is the third highest-paid coach in the country. Smart is making $10.25 million in 2022 as the coach of the University of Georgia’s football team. Smart became the head coach at Georgia in 2016, and since then, the Bulldogs have gone 73-15, won six bowl games, and appeared in two national championship games. This great run was capped off by a College Football Playoff National Championship in 2021.

Lincoln Riley takes the number four spot of highest-paid college football coaches. As a first-year head coach at the University of Southern California (USC), Riley has a salary of around $10 million in 2022. Riley’s previous job was at the University of Oklahoma. With the Sooners, he went 55-10 in five seasons, won four consecutive Big 12 championships from 2017-2020, and won the Cotton Bowl following the 2020 season.

Brian Kelly coached his first season at LSU in 2022. After 12 seasons with Notre Dame, Kelly moved south to become the head coach at Louisiana State University (LSU). In his first year with the Tigers, 2022, Kelly is making $9.5 million. In his previous stint with the Fighting Irish, Kelly won 113 games with just 40 losses, along with five bowl game victories and seven 10-win seasons.

Mel Tucker is the sixth highest paid college football coach. Coaching at Michigan State University, Tucker is making $9.5 million in 2022. After one year at Colorado and a 2-5 season with the Spartans in 2020, Tucker led Michigan State to an 11-2 record in 2021 and won the Peach Bowl at the end of the year. This was the Spartans’ best season since 2015 and resulted in Tucker receiving an extension that jumped him up in salary.

Coaching at one of the most successful schools in the country, Ryan Day is the seventh highest paid NCAA football coach. Day is making $9.5 million in 2022 while coaching at Ohio State University. In his first four seasons with the Buckeyes, Day has gone 34-4, won two Bowl games, appeared in the national championship game following the 2020 season, and finished in the top six in the national rankings at the conclusion of each season.

While his team has struggled in recent years, David Shaw’s overall body of work has given him a very respectable salary. Shaw is making $8.925 million in 2022 while coaching the Stanford Cardinal. He has been with the school since 2011, and in his first eight seasons, the team went 82-26, won five bowl games, and had five 10-win seasons. While the success hasn’t quite been there the last few years, Shaw still remains a valued piece at Stanford.

Mario Cristobal’s salary is listed at $8 million for 2022. His previous coaching stint was with the Oregon Ducks, with whom he went 35-13 in four-plus seasons after taking over for the final game in 2017. In that time, the Ducks won two bowl games and had two 10-win seasons.

The final coach on the top college football coach’s salary list is Jimbo Fisher. Fisher is making $7.5 million in 2022 while coaching at Texas A&M University. In his first four seasons with the Aggies, Fisher won 33 games against just 14 losses after going 83-23 in eight seasons at Florida State. While with Texas A&M, Fisher has won all three of his bowl games and finished in the national top 20 each year.

While they did not make the top 10, the 10 coaches below still deserve some recognition as honorable mentions. They are listed in alphabetical order by last name.

Who is the highest paid college football coach in the world?

The highest paid coach in college football is Dabo Swinney. Swinney is the coach at Clemson University, and for the 2022 season, he is making $10.5 million in base salary. While with Clemson, Swinney has won 158 games and brought the Tigers two national championships in 2016 and 2018. Since 2011, the Tigers have won at least 10 games in every season and won 10 postseason games (Bowl games and playoff games).