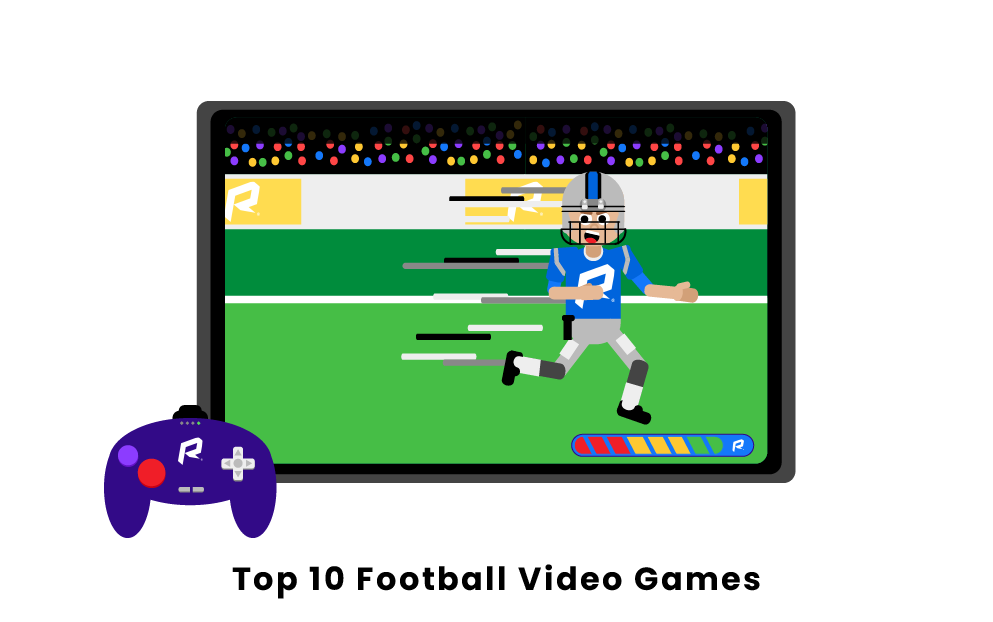 What are the most popular football video games?

ESPN NFL 2K5 was the final installment of the video game series before an agreement between EA Sports and the NFL. NFL 2K5 came out July 20, 2004, and is still a fan favorite today. This game was released on PlaySation 2 and Xbox. Fans loved the on-field gameplay and the first-person visuals a player received while playing the game. Fans of the NFL found this game to be fun and player-friendly because of the different gameplay options within the game. Overall the best feature of this game was the groundbreaking graphics which set the tone for many football video games to come.

Tecmo Super Bowl is the classic NFL football video game that laid down the path for hundreds of games to come. Tecmo is a NES video game that is loved by many video gamers due to its style and accessibility to multiple different formats. This video game offered many different modes, such as preseason, regular-season, and Pro Bowl, along with the capability to control multiple teams. The cult classic game debuted over 29 years ago and still remains a favorite game amongst football fans and video gamers. Although the graphics in NFL video games have developed significantly, nothing beats the classic feel this game provides.

Madden 2005 broke through into the gaming world and certainly made its mark with fans when it scored a 91 on Metacritic. Defensive player Ray Lewis in motion is plastered over the cover, which hints at the amazing defensive incorporation this game holds. EA Sports focused on making the defensive aspect of football video games more interactive, interesting, and fun for gamers. The tackles within the game finally started to look more lifelike and focused more on player-controlled scenarios which helped immerse players more into the game. Fans of the Madden series classify Madden 2005 as the best due to its focus on the importance of defense and allowing players to have more control.

NCAA Football 2014 was the last installation of the college football series from the EA developers. This game was a fan favorite for so many because of the love they have for college football in their hearts. Fans of the video game also praised the offensive plays within the game, the graphics, and the control that they had over their players. There was also a deep recruiting system added to the game, which also proved to be a big hit with fans because it still cannot be experienced today. Overall this game provides a great platform for fans of college football to play as their favorite teams and make amazing offensive plays on the field as well.

Madden 2004 focused on providing amazingly fun and detailed offensive plays for players to conduct during the game. This video game also introduced hot routes and a large number of playmaker abilities which helped increase the realistic feeling of playing football while playing the video game. Madden 2004 also earned an incredibly high Metacritic score of 94, which many football fans think is well deserved. There was also an introduction to owner mode in the franchise, which allowed players to control item prices and relocation of stadiums within the game.

Mutant Football League was a very successful and extremely popular game from the 1990s and still proves to be a fan favorite today. This game was unique in the fact that it combined the popular game of Mortal Kombat and football. The 1993 game instantly became a cult classic amongst football fans and video game players as well. The game is praised not only for its uniqueness but also for its camera point of view, the intense setting of the game, and the ability to bribe officials during the game. While this may not be one of the most classic football games, fans love it for how different it is and what a refreshing twist it provides.

Madden 11 may not have been the favorite Madden game in the history of football video games, but it still proved to be a great game overall. Specifically, with innovation, Madden NFL 11 created a new meter to rate kicking, better animations throughout the football game as a whole, and better audio for players, which provides a greater playing experience. Fans also loved that they were given the ability to vote on which iconic player would be chosen to grace the cover of the video game. The game also had a higher Metacritic score of 84, which was largely credited to the Ultimate Team as offered in the base package of the game.

The game NFL Street is a fan favorite mainly because the amazing EA team was the developer. NFL Street came out in 2004 and instantly became a fan favorite with NFL fans, but it also caught the attention of a larger audience because of the options to change the clothes of the players. The game features a seven-on-seven format which fans like because of the more relaxed game feel along with being able to focus on a smaller number of players. There is also a character creator aspect, cool moves the players could perform, such as backflips, and a style points system as well.

NFL Fever 2004 was the last NFL-focused game that Microsoft Game Studios released. NFL Fever 2004 featured Peyton Manning on the cover, which made fans excited when purchasing it. New players found the game fun and challenging enough to keep them returning to it for years on end. The game also provided great visuals for fans and a large amount of competition within the game which helped keep fans impressed with the game. This game may not have been as appreciated as much as other NFL games at the time, but looking back on this game, it was clear that it was ahead of its time.

NCAA Football 06 is a classic game perfect for both new fans and more nostalgic players. It was first released in 2005 by EA Sports on both Playstation 2 and Xbox. While most football video games focus on the NFL, NCAA Football 06 focuses on collegiate teams and championships. Though the graphics are not as fancy as with its contemporary counterparts, the gameplay is very intuitive and a rightful classic in a many-game franchise.

All-Pro Football 2K8 is an innovative and gorgeous game for fans of professional football. The game was initially released in 2007 by 2K sports for both Playstation 3 and Xbox. One thing that makes the game so unique is its lack of official NFL licensing. Because of this, the majority of player options are retired professional football players placed into either gold, silver, or bronze categories based on their stats when they retired. All-Pro Football 2K8 has simple gameplay and is a fun option for any video game enthusiast interested in playing as NFL greats.

Madden NFL 17 was a revolutionary release for the popular franchise, with updated controls and ball-carrier animations. The game also featured an improved franchise mode, refined gameplay mechanics, and increased on-field player interactions. The gameplay also focused more on offense, as compared to the defensive focus of prior releases, with special emphasis on the running game. Although each edition of Madden has its fans, NFL 17 represents a giant step forward for the game and a modern classic, as it set the stage for Madden in its current form.

What is the best football video game?

The best football video game is ESPN NFL 2K5. Released in 2005 for PlayStation 2 and Xbox, it was the last release in the wildly popular NFL 2K franchise. One of the most beloved features of the game is gameplay resembling an ESPN broadcast. The game is set to be rebooted in 2022. Other excellent football games are Tecmo Super Bowl, NFL Blitz 2000, Madden 2005, and NCAA Football 2014.

What is the most realistic football video game?

The most realistic football video game is Madden NFL 23. Throughout the years, the Madden franchise has consistently been among the highest-rated and best-selling football games, and the most recent edition upholds this tradition. Some gamers have lamented the slow pace of updates in recent years, but Madden remains the most realistic option for football gaming.

What is the best college football video game?

The best video game specifically for collegiate football is NCAA Football 2014. The game is popular for its excellent graphics, its wide array of college lends, and very accessible gameplay. Interested fans can enjoy the game on either Playstation 3 or Xbox 360.