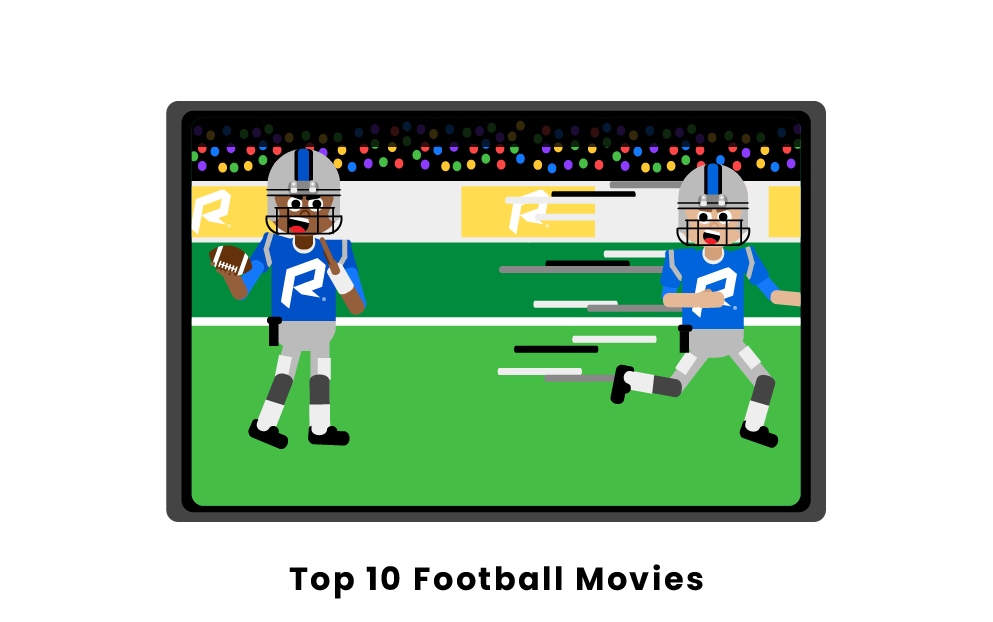 What are the Most Popular Football Movies?

Rudy is considered by many to be one of the greatest football movies of all time. Released in 1993, this movie is about a young man named Rudy Ruettiger that had been told that he was too small to play college football for his entire life. He had poor grades and not enough talent to play football at his dream school, Notre Dame. Despite the discouragement from his family and girlfriend, Rudy looks to pursue his dream. He works hard throughout the movie to pursue his dreams despite their lack of encouragement. Rudy portrays the value of hard work and determination. It is more about the journey than the destination in this movie.

Remember The Titans was an extremely groundbreaking movie released in the year 2000. This movie is based on a true story from the 1970s about a black high school football coach in Alexandria, Virginia. He was tasked with coaching the first racially-integrated football team that the school had ever seen. The coach must help the players learn to work as a unit and respect one another as individuals. Throughout the film, the audience is shown the power of sports in unifying a diverse group of people. There are key life lessons about overlooking differences in race or ethnicity to connect with the deeper inner self. This movie contains a powerful message for all groups of people.

Brian’s Song is a true story about the lasting relationship between teammates Brian Piccolo and Gale Sayers. The two men play for the mid-1960s Chicago Bears during what is still a highly-segregated time. Even though they compete for the same spot on the team and are of different races, they have built an incredible friendship. When Piccolo discovers that he has terminal cancer, the men and their wives must deal with this harsh reality. This story is extremely important, as it highlights the racial inequality that occurred during the Civil Rights Era. This relationship defied the odds, as the men grew to love and respect each other as teammates, competitors, and individuals. This depiction based on a true story helps show the power that football and sports have on two individuals that are taught to dislike one another.

The story of Friday Night Lights focuses on a high school football team in the economically depressed city of Odessa, Texas. The community of Odessa looks forward to Friday nights that give them joy while watching the Permian Panthers. In their attempt to win the state championship, the Panthers work to play the perfect game and bring life back to the city. Released in 2004, Friday Night Lights was an accurate portrayal of how football in western Texas is more than just a game and how it can affect families and members of the community. The players have a lot of weight on their shoulders, but they overcome hardship to inspire their community. This is a great story with quality football scenes as well.

Any Given Sunday is a classic football movie that presents the struggles of modern football players. When legendary quarterback Cap Rooney is knocked out of a game, third-stringer Willie Beaman is called in to take over for the rest of the season. The successful Miami Sharks are looking to continue their winning streak and make it to the championship. This movie is considered to be a very accurate depiction of modern professional football. This film looks at the role of politics and selfishness in professional football organizations, taking a realistic and exposing look at how these might affect a team’s success.

The Blind Side is an extremely well-known film that was released in 2009. This movie is based on the true story of Sean and Leigh Anne Tuohy, who took in a homeless African American teenager named Michael Oher, who was raised in a low-income area of Memphis, Tennessee, and did not have access to a proper education or helpful learning skills. The film portrays how the Tuohys fostered Michael Oher and introduced him to football. The film spoke to a few key audiences and emphasized some of their life experiences, honing in on the importance of family and drawing out many emotions from its viewers. It is more than just another football movie to many and captures the essence of an incredible true story.

The Replacements is a comedic football movie about all of the Washington Sentinels professional football players in the NFL league going on strike. Team Owner Edward O'Neill calls on retired coach Jimmy McGinty to coach a team of poor substitute players. McGinty looks to former Ohio State player Shane Falco to whip the team into shape for the last four games of the season. The team consists of a bunch of misfits from many different backgrounds, and the movie takes us on their journey of going from bad to great football players. This movie, released in 2000, is a great film to watch for a good laugh. The characters are relatable and hysterical. The story has a balance of comedy and well-played football and is a true comeback story about the power of second chances.

The Longest Yard is a great film about former professional football player Paul Crewe, who left to go to the professional league after being caught shaving points during a game. Due to some poor choices, Crewe is sent to prison, where he is tasked by the warden to put together a team of inmates to play a football tune-up game against the semi-professional prison guard team. This film is all about the importance of second chances and not making the same mistakes over again. Even though the main character is flawed, we decide to root for his victory. There is a great combination of good football and comedy throughout the movie, as well as some crucial life lessons.

Jerry Maguire is a popular sports movie about a successful sports agent named Jerry Maguire who has it all. With a fiancée, elite clients, and tremendous respect, Jerry finds himself questioning his purpose in life. When he voices his doubts and concerns, he loses his job, his fiancée, and all of his clients except for one. Rod Tidewell, a football player, remains his loyal client as Jerry tries to rebuild what he once had. This film is both a great football movie and a great movie in general. It has an inspiring message about how people’s paths in life aren’t written in stone, and mistakes are okay. It also stresses the importance of making decisions that are fulfilling to oneself. The combination of powerful messages and great football makes this an awesome movie.

Varsity Blues is a compelling movie that tells the story of a small high school football team in Texas. The Canaan Coyotes are known to win and carry the community on their backs. Every Friday night, the town gets together to watch the team attempt to get to their 23rd division title championship game. When starting quarterback Lance Harbor is injured, the Canaan Coyotes turn to backup quarterback John Moxon to lead the team. His leadership and football skills are challenged by the team as he works to gain the trust of his teammates and the community.

This movie shows the difficulties of being a high school student and having to deal with immense pressure from everyone around you. It examines the pressures in football but also in everyday life. This movie provides decent football and good humor for the audience.

Undefeated is an interesting football film on this list, as, unlike the other movies we have listed above, it is a documentary. The film was produced in 2011 and covers the Manassas Tigers, a high school football team from Memphis, Tennessee. The documentary follows the Tigers’ struggles as they attempt to secure a winning season one year after a crushing season of losses. Much of the film follows the Tigers’ coach, Bill Courtney, who strives to turn his team around into an excellent squad of both athletes and star students. Undefeated is a remarkable documentary not only for its focus on the struggles of a small, rather unknown high school team but also for the quality of its filmmaking, which helped it win an Academy Award for Best Documentary in 2012.

Another fictionalized rendering of a true story, Invincible follows the story of Vince Papale. A young bartender from Philadelphia in the 1970s, Papale gets the chance of a lifetime when he is accepted to play with the Philadelphia Eagles. Invincible chronicles Papale’s struggles in joining and playing for the team and the help he receives from Eagles head coach Dick Vermeil. Papale is played by Mark Wahlberg, with Greg Kinnear taking on the role of Dick Vermeil. Invincible was released in 2006 and received favorable reviews from critics. It is an excellent story of perseverance and grit in the face of almost insurmountable odds.

Draft Day is another interesting addition to our list, as it shifts the focus on the sport of football from players and coaches to the behind-the-scenes decisions of general managers and higher-ups on a football team. The film follows Sonny Weaver, the fictional general manager of the Cleveland Browns, who is played by Kevin Costner. After securing the number one draft pick at the NFL Draft, Weaver has the opportunity to build a strong team but faces much inner conflict and turmoil over whom to select, as he knows that his choice will either spark or ruin the dreams of nearly 100 young men who hoped to earn the coveted first draft pick. Draft Day takes place over the course of one day, and with the ticking clock of the draft approaching, the film has a very tense and exciting atmosphere that makes it an interesting watch.

What is the best football movie?

Although this question is open to debate, many recognize Rudy as the greatest football movie of all time. Even among viewers who are not sports fans, David Anspaugh’s 1993 film is regarded as a classic. The football scenes are excellent, and it has many elements of a sports classic, including an underdog story, shocking drama, and an inspiring ending.

What is the most realistic football movie?

While many films feature realistic football scenes, Any Given Sunday provides the most realistic overall depiction of playing football. The 1999 classic from director Oliver Stone features stellar acting from stars Al Pacino, Dennis Quaid, Cameron Diaz, and Jamie Foxx. Any Given Sunday has beautiful gametime depictions. The film also accurately portrays the danger of playing football, along with the sudden changes in fortune that can happen in the NFL.

What is the best football documentary?

The best football documentary is Undefeated. This gritty yet heartwarming film follows three high school football players in inner-city Memphis. Their team, the Manassas Tigers, is underfunded, underperforming, and a bit of a joke in the local football community. A new, enthusiastic coach inspires the players and helps to turn the team around. The intimate perspective of the film builds empathy for the players and the coach. Undefeated won an Oscar for best documentary in 2011.