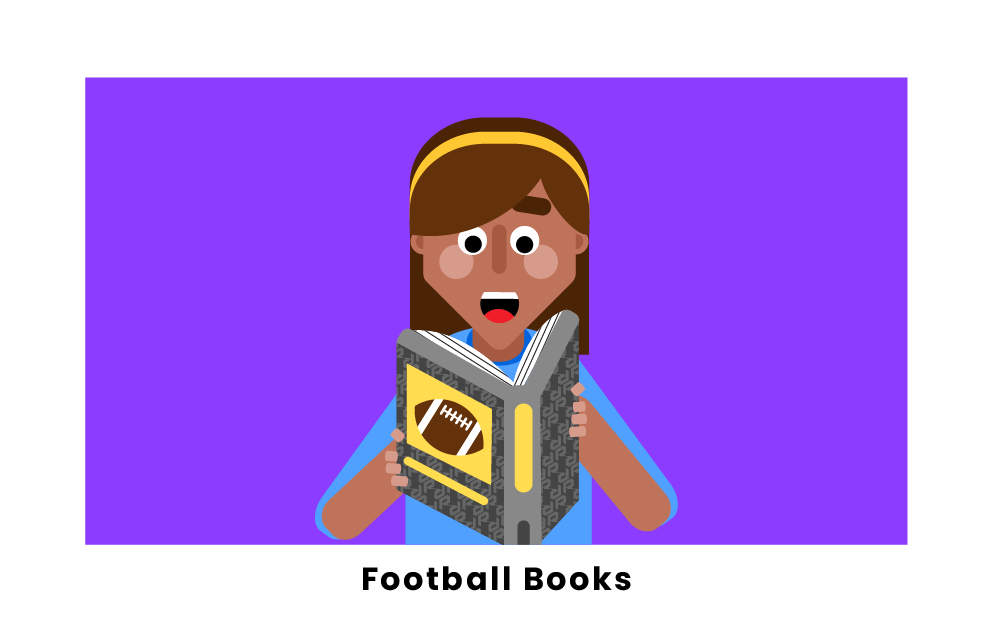 What are the Most Popular Football Books?

That First Season is an incredible novel written by John Eisenberg. The book is about the renowned NFL quarterback Vince Lombardi and the Green Bay Packers, detailing research and interviews about the team, town, and their star player. In the 1950s, the Green Bay Packers were a struggling team that had not been a winning franchise for more than a decade. They even almost lost their team to another city and were in need of players to lead them back to victory. This book tells of a New York City native who traveled to Green Bay and transformed the team into winners in a single year. Vince Lombardi not only transformed the team, but resurrected the passionate sports city of Green Bay.

2. The Best Game Ever

The Best Game Ever reviews one of the most notable games to have occurred in NFL history,  the 1958 NFL Championship game between the New York Giants and Baltimore Colts. There were 64,000 fans in Yankee Stadium and 45 million viewers via television to watch the first sudden-death NFL game. At the time, the Colts had the best offense in the league while the Giants had the best defense. This novel excellently portrays the effect that this single game had on American football history.

Written by former Dallas Cowboys wide receiver, Peter Gent, North Dallas Forty is a classic novel that dives into the lives of professional football players off the field. It focuses on aging wide receiver Phil Elliot who keeps himself together through the use of painkillers and cortisone. This story about a man that wants to grab hold of his glory days is certainly considered one of the best football novels ever written. There has also been a movie based on this book that was released in 1979.

A Fan’s Notes is a book written by Frederick Exley from the perspective of a person who was destined to be a football fan and not a player. Exeley hints at being the ultimate loner during his high school years, but developing a love for the game. He touches upon important themes in the book and references New York Giants star Frank Gifford as a hero throughout the book. Exley talks about how American football fans live vicariously through their sports heroes to gain fulfillment. This book has touched many people and highlighted the role of outsiders and the role that they can play as fans of the sport.

5. America's Game: The Epic Story of How Pro Football Captured a Nation

America's Game: The Epic Story of How Pro Football Captured a Nation is a great book that captures the growing popularity of American football from the World War II era to the 1980s and 90s. It explores how football went from being a low priority when considering sports to essentially being a sacred game. In addition to becoming more popular in the post-war era, the league also fell under better management and became a game that would be great for television and the modern age. This is a top book to read for those looking for a better understanding of football’s development in America.

Billy Lynn's Long Halftime Walk is a novel written by Ben Fountain, winner of the National Book Critics Circle Award for Fiction. This book spans over a single day, specifically that of the NFL’s Thanksgiving Day showcase with the Dallas Cowboys. It starts by analyzing the pregame tour of the stadium and ends with the post game rundown. Fountain focuses mainly on the halftime show and speaks of it as ridiculous and out of place. The audience is challenged to think about whether the game has been turned into a giant advertisement. Fountain captures both America’s focus on the sport as well as a football fan’s desire for a show.

A Thinking Man's Guide to Pro Football is written by Paul Zimmerman, the first NFL football writer who incorporated game statistics and analysis into his writing. His years of experience, relationships with football enthusiasts, and strong grasp of strategy and football analysis allow him to provide insightful metrics and opinions. This book goes beyond the game to look at the sport in terms of having a structured and data driven approach to play that will give teams better odds of winning games.

Finding the Winning Edge is a novel written by Bill Walsh, a professional and college football coach. Bill Walsh is someone who had one of the greatest impacts on the National Football League alongside players like Vince Lombardi and George Halas. However, Bill Walsh did more than just have an impact; he became someone that other players and coaches wanted to copy and replicate in terms of how to play and structure the game. This book outlines the career-long managerial, coaching and philosophical styles of the 3-time Super Bowl Champion.

When Pride Still Mattered is a biography written by David Maraniss about the incredible football career of Vince Lombardi. Lombardi is considered to be the man that transformed football into more than just a game for the American people. This book covers his two decades as high school coach, and an assistant coach for several colleges and the New York Giants. When he became the head coach for the Green Bay Packers, Lombardi changed the game, receiving five championships in nine seasons. This book captures the essence of Lombardi as more than a man, but a symbol of power.

10. The Education of a Coach

The Education of a Coach is a football novel written by Pulitzer-Prize winning author David Halberstam. This book was named as a bestseller and takes the audience on a journey inside the career of the legendary NFL football coach, Bill Belichick. Halberstam describes the leadership involved in over three decades of coaching a remarkable football franchise, the New England Patriots, and one of the best quarterbacks of all time, Tom Brady. Halberstam also explores intricate aspects of the game itself, as well as Belichick’s coaching strategies and thoughts both on and off the field.

The League: The Rise and Decline of the NFL

Written by David Harris in 1986, The League: The Rise and Decline of the NFL details the reorganization that the National Football League went under from 1972 to 1984. Based on years of research, interviews, and NFL Documents, Harris essentially investigates how internal power struggles caused the NFL to shift how the league is structured and how football became the business that it is today.

Monsters: The 1985 Chicago Bears and the Wild Heart of Football

As its name suggests, the 2013 book Monsters: The 1985 Chicago Bears and the Wild Heart of Football describes the one championship season the Chicago Bears ever had. Its author Rich Cohen starts from the very beginning of the 1984-1985 season and thoroughly explains the many colorful moving parts that made the Bears get their nickname “The Monsters of Midway.” On top of that analysis, Cohen also describes what it meant to Chicago for their home team to dominate for one glorious season.