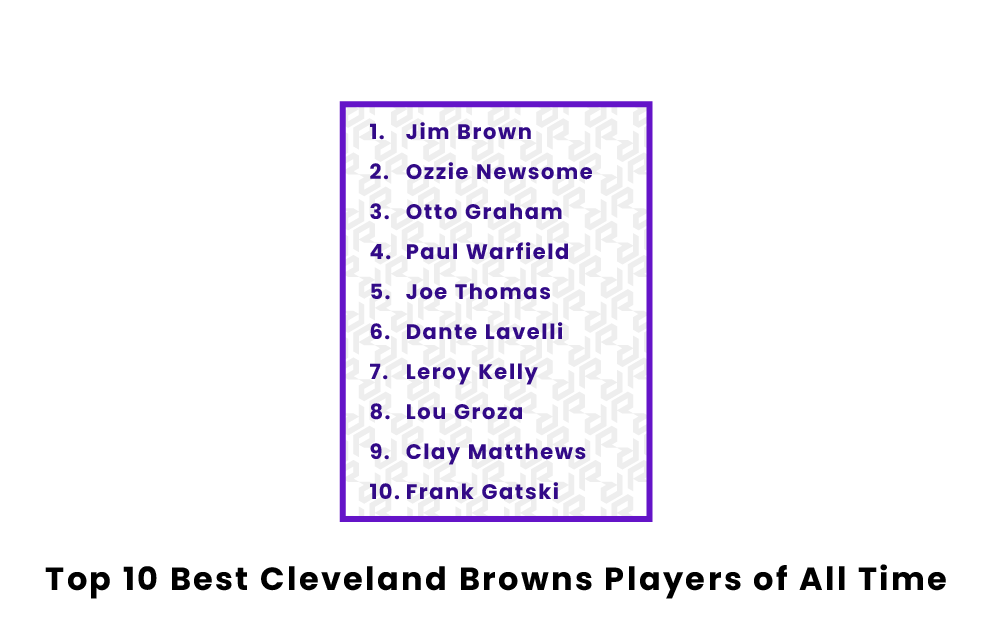 The Cleveland Browns were established in 1944 and began playing in 1946. Though they've seen less success in recent years, their golden era produced standout players that have made their way into the record books. Below is our ranking of the best Cleveland Browns players of all time.

Who are the best Cleveland Browns football players of all time?

Jim Brown is the greatest Cleveland Browns player of all time. He was born February 17, 1936, in St. Simons, Georgia, and attended Syracuse University, where he had an exceptionally well-rounded athletic career, participating in lacrosse, basketball, baseball, and track before setting his sights on football professionally. Jim Brown was a first-round draft pick in 1957 and won both Rookie of the Year and MVP that same year at just 21 years old.

Brown is widely considered one of the greatest running backs the league has ever seen and held a slew of records when he retired in 1966. He led the league in rushing yards in eight of his nine seasons, having racked up 12,312 yards during his tenure with the Browns, and he also held the record for rushing touchdowns at the time with 106. Jim Brown shocked fans when he retired at the age of 30 during his athletic peak. Over the span of his nine-year career, he never missed a game. When scheduling issues arose for a film he was working on, owner Art Modell threatened to fine Brown for every week of training camp he would miss, and rather than taking the fines, Brown left the sport entirely. He went on to find success in the movies, but fans speculate to this day how much more he would have accomplished on the field. To this day, he is considered one of the NFL’s greatest players in history and is, without a doubt, the greatest Cleveland Brown to ever play.

Legendary tight end Ozzie Newsome’s size and speed made him an indomitable presence on the field that led the franchise in receptions and receiving yards. He was born March 16, 1956, in Muscle Shoals, Alabama, and was an All-American at Alabama State University before being drafted in 1977 by the Browns. He played for 13 seasons and is the only Browns player to play in three different decades.

Often playing through injury, Newsome won the Ed Block Courage Award for his efforts. At the time of his retirement, he held the league record for career receptions with 662, most receptions in a season with 89 in 1983 and 1984, and career receiving yards with 7,980. Aside from his durability on the field, Newsome displayed exemplary leadership and was committed to giving back, earning him the NFL Players Association Whizzer White award for community service.

Quarterback Otto Graham was unstoppable and helped define football’s early era and much of the Cleveland Browns’ history of success. He was born December 6, 1921, in Waukegan, Illinois, and attended Northwestern University and Colgate University. He was the first player selected by the Browns to play in the brand-new AAFC and quickly became central to their success.

Graham led the team to ten consecutive title games and helped secure four AAFC and three NFL championships. He passed away on December 17, 2003, and is remembered as Cleveland’s best quarterback of all time, the only QB from the franchise to make it into the Hall of Fame.

Paul Warfield is widely considered the best wide receiver to ever don a Browns jersey. He was born on November 28, 1942, in Warren Ohio, and attended Ohio State University before he was drafted by the Browns in 1964. In his rookie season, he made a splash when he caught a career-record 52 passes and led the Browns in all receiving categories.

Warfield played six seasons with the Browns, during which they played in four NFL Championship Games, and won the title in 1964 before being traded to the Miami Dolphins, where he helped them through their undefeated season in 1972. He played in Miami for five seasons but returned to Cleveland for his final two in 1976. His speed, agility, and sheer intimidation factor made him a huge asset to both teams he played for. Despite his stint with the Dolphins, he is still ranked sixth in yardage and third in receiving touchdowns for the Browns.

Joe Thomas played with the Browns for an exemplary eleven seasons as an offensive lineman, often through injury. In that time, he held a streak of 10,363 consecutive snaps, believed to be the longest streak in NFL history. Joe Thomas was born in Brookfield, Wisconsin on December 4, 1984, and was an All-American at Wisconsin University before he was drafted by the Browns in 2007.

An injury eventually ended Thomas’s streak and career in 2017. He’s still celebrated though for his grit and tenacity and was a bright spot for the Browns franchise during some of their most difficult years. Though his time was cut short, Joe Thomas will undoubtedly make his way into the Hall of Fame and continues to be recognized as one of the best left tackles the league has ever seen.

As a wide receiver, Dante Lavelli became Otto Graham’s go-to on the field, and the two were a well-oiled machine. He was born February 23, 1923, in Hudson, Ohio, and attended Ohio State University. Injuries throughout his college career and a stint in the army meant Lavelli had only played in three college games before he was selected as a pro. Despite this, he beat out more experienced players and was part of the Browns’ inaugural team in 1946.

Lavelli led the league in receptions as a rookie and amassed 6,488 receiving yards and 62 receiving touchdowns throughout his career, many of which were in collaboration with Graham. He helped the Browns to seven AAFC Championships, and to develop the strategies and style of play that defined the Browns’ most successful early era.

When Leroy Kelly joined the Browns in 1964 as a running back, he had big shoes to fill in the wake of the legendary Jim Brown. Rather than let this intimidate him, he went on to carve out a remarkable career in his own right, leading the league twice in rushing yards and three times in rushing touchdowns. He was born on May 20, 1942, in Philadelphia, Pennsylvania, and attended Morgan State University before beginning his decade-long career with the Browns.

After shadowing Jim Brown for two years, he filled in after his retirement in 1966 and performed beautifully until his own retirement in 1973. He was awarded MVP and the Bert Bell Award in 1968 for the player of the year and distinguished himself as one of the best receivers the league had seen.

When Lou Groza retired in 1967, he left behind a 21-year legacy with the Browns, the longest career the league had seen up to that point. He was born January 25, 1924, in Martins Ferry, Ohio, and attended Ohio State University before joining the Browns in their first season in 1946. His talent, versatility, and sheer longevity landed him on our list.

Over the span of his lengthy career, he tallied 1,608 points and spent many years as the all-time top scorer. Today he still leads the franchise in points. Part of the Browns’ golden era and beyond, Lou Groza is regarded as one of the greatest kickers in NFL history.

Clay Matthews was born March 15, 1956, in Palo Alto, California, and attended the University of Southern California before being drafted by the Browns in 1978. He began a 16-year career as a linebacker in Cleveland, during which he became a crucial element of their defense. He helped the Browns to three AFC championship games and set a franchise record with 62 career sacks. His induction into the Hall of Fame has been long anticipated since his retirement from the league in 1996, but thus far he has been infamously snubbed.

Frank Gatski was exceptionally reliable, never missing a game, and played in eleven championship games for eight wins over the span of his career. Gatski was born March 18, 1919, in Farmington, West Virginia, and played for three years at Marshall college. After serving in the army, he made the 1946 team as a free agent and played for 11 seasons before he was traded to Detroit for a final season in 1957.

The Browns won four AAFC champion titles during Gatski’s tenure, and, although he drew less attention than many of his flashier teammates, he was lauded as one of the best centers of his era and was enshrined in the NFL Hall of Fame in 1985. He passed away in 2005 and is remembered for his consistency, skill, and outlook as one of Cleveland’s best.

Who is the best Cleveland Browns quarterback of all time?

The best Cleveland Browns quarterback was Otto Graham. He was part of the Browns’ first roster in 1946 and helped them win four consecutive championships in his early career. Graham is the only Browns quarterback to make it into the Hall of Fame for his accomplishments and ranks third on our list of the greatest of all time.

Who is the best Cleveland Browns running back of all time?

The Cleveland Browns’ best running back of all time is Jim Brown. He is widely regarded as one of the best players the league has ever seen. He was selected for nine Pro Bowls and was awarded league MVP honors four times throughout his legendary career.

Who is the best Cleveland Browns wide receiver of all time?

Paul Warfield is widely considered the Cleveland Browns’ best wide receiver of all time. He was selected for eight Pro Bowls and was a huge asset to the Browns, but Warfield was traded to the Miami Dolphins for five seasons in the middle of his career before returning to Cleveland. Despite his time away, he still ranks in yardage and receiving touchdowns for the Browns and is considered by many to be their greatest wide receiver.

Pages Related to Top 10 Cleveland Browns Players of All Time