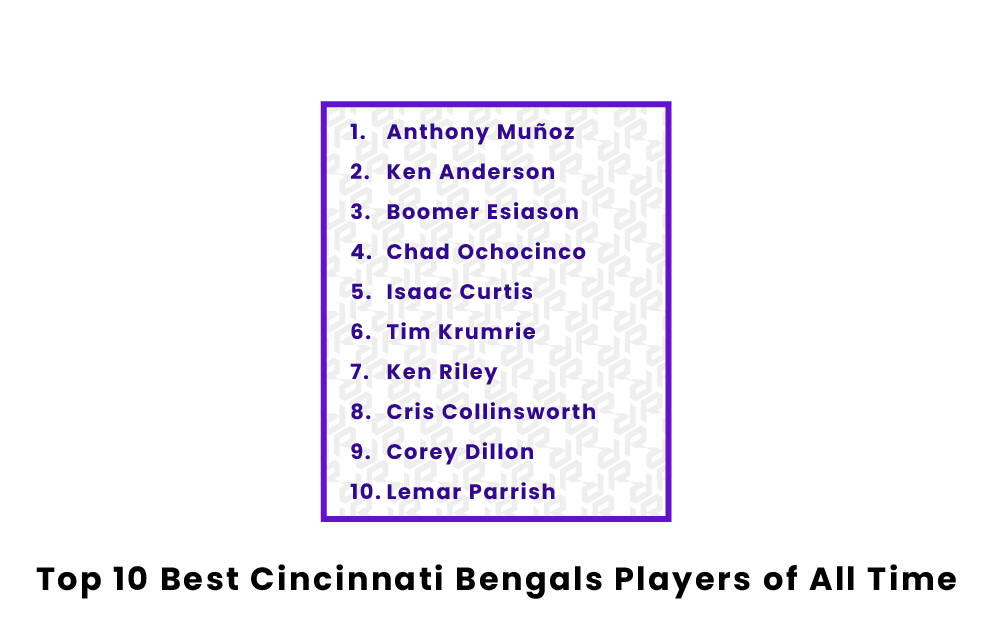 The Cincinnati Bengals are a franchise with a long history in the National Football League. Since their debut in professional football with the AFL in 1968, the Bengals have totaled a respectable 16 playoff appearances. They would be nowhere near this number without the many talented players whom they have rostered over the years. Listed below are the ten best Cincinnati Bengals of all time.

Who Are the Best Cincinnati Bengals Football Players of All Time?

Anthony Muñoz is by far the most legendary athlete to have ever played for the Cincinnati Bengals. Muñoz was drafted by the Bengals in 1980 with the third overall pick in the NFL Draft, and he went on to spend what was essentially his entire career with the team. In that time, Muñoz exhibited unparalleled consistency. In only his second season in the NFL, Muñoz was listed as a First-Team All-Pro, and also made his first Pro Bowl.

In the following years, Muñoz would be selected to 11 total Pro Bowls, all of which came in consecutive seasons between 1981 and 1991. In that span, he also made nine First-Team All-Pro lists and had two Second-Team appearances as well. Muñoz was also awarded the prestigious NFL Man of the Year award, which is given to the NFL player who displays the most charitable and generous spirit each year. Muñoz has since been elected to the Pro Football Hall of Fame.

Ken Anderson was the starting quarterback for the Cincinnati Bengals between 1971 and 1986. In fact, Anderson spent his entire professional football career with the Bengals, exhibiting a loyalty that is not often seen in professional sports. In his time with the team, Anderson was able to amass virtually every significant award that the NFL offers. In 1975, Anderson was awarded the NFL Man of the Year award. In 1981, he earned the Comeback Player of the Year Award. For his legendary passing season in 1981, Anderson received both the NFL’s Most Valuable Player award along with Offensive Player of the Year.

That 1981 season saw Anderson throw for a career high in yardage (3,754 yards), touchdowns (29), and passer rating (98.4). Anderson was named to a Pro Bowl four times throughout his career and was named a First-Team All-Pro once. He also led the league in passer rating in four separate seasons, the first of which was in 1974 and the last, many years later, in 1982.

After the Ken Anderson era ended in Cincinnati, he was replaced by a quarterback named Boomer Esiason. Esiason spent 1984 to 1992 with the Bengals, and put up some solid numbers with the team. His 1988 season was probably his best effort on the field when he amassed 3,572 yards through the air, scored 28 passing touchdowns, and recorded a league-best passer rating that year of 97.4. For his efforts in 1988, Esiason was named the NFL’s Most Valuable Player.

Over the course of his career in professional football, Esiason recorded 37,920 total passing yards and 247 touchdowns and maintained a passer rating of 81.1. And like both Muñoz and Anderson ahead of him on this list, Esiason was also given the prestigious honor of being named NFL Man of the Year for his service to his community off the field. After his career in the NFL, Esiason has since found a very successful television broadcasting career.

Chad Ochocinco is one of the most iconic personalities to ever grace the National Football League, and the Bengals were lucky enough to roster him between 2001 and 2010. Born Chad Johnson, the talented wide receiver changed his legal name to his preferred nickname, Ochocinco. In his career with the Bengals, Ochocinco tallied seven seasons where he topped the 1,000-yard receiving mark, with his best seasons being in 2006 when he led the league with 1,369 yards and in 2007 when he set a career high of 1,440 yards through the air.

All told, he recorded 11,059 yards in his career to go along with 67 touchdowns. Ochocinco was included on the First-Team All-Pro list in three consecutive years between 2004 and 2006. He was also named a Second-Team All-Pro in 2003. By his retirement from the NFL in 2012, Ochocinco had appeared in a total of six Pro Bowls.

Isaac Curtis was another very talented wide receiver for the Cincinnati Bengals. Curtis was drafted by the team in 1973 as the 15th overall pick in the NFL draft. Curtis got his career off to a great start by making a Pro Bowl in his very first season. And he only kept up the pace from there. The following season he was included on the Second-Team All-Pro list. He would continue by being a Second-Team All-Pro in his following two seasons.

Over his NFL career, Curtis managed to include himself in four Pro Bowls, largely thanks to his blazing speed and ability to get behind opposing defenses. He finished his career with 7,101 yards on only 416 receptions, of which 53 went for touchdowns. Thanks to the consistency he showed throughout the duration of his career (which was spent entirely with the Bengals), Curtis’ name was immortalized in the Bengals’ Ring of Honor inside their stadium.

Despite being drafted in the tenth round of the 1983 NFL Draft, Tim Krumrie became one of the most consistent and iconic defensive players to ever put on the Cincinnati Bengals uniform. Krumrie played nose tackle for Cincinnati and really fell into a groove in the late 1980s. He made his first Pro Bowl in 1987, which also happened to be his first and only appearance on the NFL’s Second-Team All-Pro list. The following season Krumrie stepped up his game even further by making the First-Team All-Pro list and adding another Pro Bowl to his list of achievements.

In 1990, Krumrie was selected to receive the George Halas award, which is voted on by the Pro Football Writers of America and recognizes a player that overcomes particular adversity on their path to success. Krumrie finished his career with the Bengals in 1994, having recorded just over 1,000 total tackles, 34.5 sacks, and 13 fumble recoveries.

Ken Riley was an extremely talented cornerback who played for the Bengals between 1969 and 1983. Riley proved to be a consistent player and had a knack for finding the ball and making interceptions. Throughout the course of his career, Riley managed to intercept 65 passes. He returned five of them for touchdowns. Statistically speaking, Riley’s best season was actually his last. In 1983, Riley posted a career-high eight interceptions in only 14 games. This strong final outing earned him a spot on the First-Team All-Pro list. He also made the Second-Team All-Pro list in two other seasons.

Riley sits tied at number five all-time in total interceptions. Since retiring from playing, Riley took to coaching, where he eventually rose to the head coach position at Florida A&M. After his stint as a head coach, Riley rose to become the Athletic Director at the university. But thanks to his consistent and remarkable play in the NFL, Riley was selected for the Bengals Ring of Honor.

Cris Collinsworth began his career in professional football by being drafted by the Cincinnati Bengals in the second round of the 1981 NFL draft. Collinsworth was an immensely talented receiver coming out of the University of Florida who, at 6’5, was able to play a very physical role in the Bengals’ passing game. Collinsworth made an immediate impact for the Bengals, as he was named a Second-Team All-Pro in his first three seasons in the league. He was also selected for the Pro Bowl in those first three seasons.

Similarly, for his strong effort in his first season in the NFL, Collinsworth made the All-Rookie team which is voted on by the Pro Football Writers of America. Collinsworth retired as a Bengal in 1988, having amassed 6,698 receiving yards and 36 touchdowns. And like Boomer Esiason, Collinsworth also found a very successful career in television broadcasting once his playing days were over.

Corey Dillon played a total of 11 seasons in the National Football League, the first seven of which were with the Cincinnati Bengals. Over the course of his professional career, Dillon made four Pro Bowls - three of which were during his time in a Bengals uniform. In his rookie season, after being drafted in the second round by Cincinnati, Dillon recorded 1,129 on the ground, along with ten rushing touchdowns. As a result, the Pro Football Writers of America voted him onto the All-Rookie team for 1997.

Dillon continued the remarkable consistency by rushing for over a thousand yards in every season as a Bengal, except for one when he was sidelined by injury. In one game in his 2000 season, Dillon put up 278 yards on the ground, which is good for fourth all-time in single-game rushing performances. After his seven years with the Bengals, Dillon moved to the New England Patriots, where he helped them win a Super Bowl in 2004. Dillon finished his career with 11,241 total rushing yards.

Lemar Parrish was drafted by the Cincinnati Bengals in the 1970 NFL Draft. As a member of the Bengals, Parrish played defensive back and also served as a return specialist. He quickly made an impact at both positions, being selected for a Pro Bowl in his first season. This was a result of his five interceptions and two special teams touchdowns in his rookie season. His explosive abilities on both defense and special teams are what netted him three total appearances on the First-Team All-Pro list.

Throughout his career in the NFL, which lasted until 1982, Parrish made eight Pro Bowls and had an additional two appearances on the Second-Team All-Pro lists. Parrish also had a few unique statistics in his career, including two games in which he scored two touchdowns, a truly rare feat for someone who only plays defense and special teams. He did it first in 1970 against the Buffalo Bills and then again in 1972 against the Houston Oilers.

Who is the best Cincinnati Bengals quarterback of all time?

In terms of spectacular quarterback play, Ken Anderson is simply unmatched in all of Cincinnati Bengals history. Anderson received just about all the major awards that one can receive during a career in professional football, such as Most Valuable Player, Offensive Player of the Year, Comeback Player of the Year, and the Man of the Year Award. He was a one-time First-Team All-Pro, a four-time Pro Bowler, and led the NFL in passer rating in four separate seasons.

Who is the best Cincinnati Bengals running back of all time?

Corey Dillon is the best running back to have ever played for the Cincinnati Bengals. Dillon was difficult to match in terms of speed and explosiveness when he was on the field, which explains why he ran for nearly 300 yards in a single game. He recorded seven seasons in which he rushed for more than a thousand yards, with five of those seasons coming in at greater than 1,300 yards. He was also elected to four Pro Bowls over the course of his career.

Who is the best Cincinnati Bengals wide receiver of all time?

Chad Ochocinco is the greatest Bengals wide receiver in the team’s history. During his time as a Bengal, Ochocinco found himself on the First-Team All-Pro list three times, the Second-Team list once, and was elected to six Pro Bowls. He also led the NFL in receiving yards in 2006 with 1,369. By the time he had hung up his cleats playing in the NFL, he had racked up just over 11,000 yards receiving to accompany his 67 touchdowns.

Pages Related to Top 10 Cincinnati Bengals Players of All Time