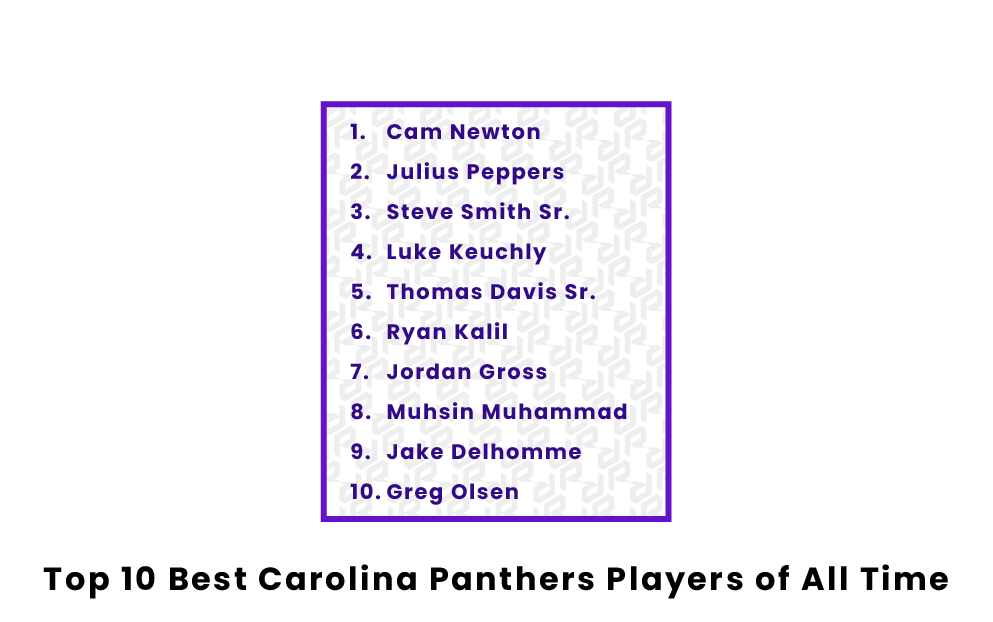 Having entered the NFL in 1995, the Carolina Panthers are among the youngest franchises in the NFL. However, with fewer than 30 years in the league, the Panthers’ fan base has been able to witness great generations of players that led to two Super Bowl appearances (2003 and 2015). Now, let’s find out who the greatest Carolina Panthers of all time are.

Who Are the Best Carolina Panthers Football Players of All Time?

After a stellar college career, Cam Newton was selected by the Carolina Panthers with the first overall pick in the 2011 NFL Draft. Newton immediately made an impact on the team by winning the NFL Offensive Rookie of the Year Award and making it to the Pro Bowl in his first year.

Thanks to his electric style, Cam Newton has become one of the best dual-threat quarterbacks in the history of the league. To this day, the Auburn graduate holds the record for most rushing touchdowns by a quarterback with 75.

In 10 seasons with the Panthers, Cam Newton was selected three times to the Pro Bowl and was voted into the 2015 First-Team All-Pro. Newton was also the leader and the main hero of the Panthers trip to the Super Bowl in 2015, earning NFL MVP honors and leading the team to a franchise best 15-1 regular season record.

Prior to Cam Newton’s arrival, the biggest idol in the Panthers fan base was Julius Peppers. Born and raised in the Raleigh area, Peppers played at University of North Carolina, Chapel Hill for four years, before being drafted second overall by the Carolina Panthers.

Peppers spent the first nine seasons of his NFL career in North Carolina, before playing for the Bears and the Packers. Eventually, the defensive end went back to Charlotte to play there two more seasons and retire as a Panther.

Throughout his NFL career, Peppers was one of the scariest defensive ends in football, accumulating 159.5 sacks, which is fourth in the NFL all-time rankings, and finishing in double digits for sacks in 10 of his 17 seasons. Peppers made it to the Pro Bowl nine times and to the First-team All-Pro three times, and was also voted into the NFL 2000s and 2010s All-Decade Teams.

Despite his small size (five feet and nine inches tall), Steve Smith Sr. was for many years one of the best wide receivers in the NFL. His speed, mixed with great route-running and catching abilities, made him a nightmare for most secondary units in the league, as he led the NFL in receiving yards and co-led in receptions and touchdowns in 2005.

Following a successful college career at the University of Utah, Steve Smith Sr. was taken in the third round of the 2001 NFL Draft, becoming one of the biggest steals of that class. Steve Smith Sr.’s impact on the league was immediate, as he was voted into the First-team All-Pro as a rookie and kept his stellar play for the following seasons, leading the Panthers to their first ever Super Bowl appearance in 2003. After a brutal injury in Week 1 of the 2004-2005 season, Smith Sr. was forced to miss the whole season with a broken leg. The receiver followed up the injury putting up the best season in his career, earning the 2005 NFL Comeback player of the Year Award and putting his name in the history of the franchise.

Despite retiring at just 29 years old, Luke Kuechly is considered one of the greatest middle linebackers in NFL history. Thanks to an unmatched football IQ, Kuechly was the leader of the Panthers defense during his eight seasons in North Carolina and played a crucial role in the franchise’s second trip to the Super Bowl in 2015.

Kuechly came into the NFL as one of the best linebackers in football and took no time to show his talent in the league, winning the 2012 NFL Defensive Rookie of the Year Award. The Ohio native was voted five times First-Team All-Pro, two times to the Second-Team All-Pro, and seven times to the Pro Bowl, while leading the league in tackles in 2012 and 2014. He was also the recipient of the 2013 NFL Defensive Player of the Year Award and was included in the NFL 2010s All-Decade Team.

A great portion of the success of the Carolina Panthers in the 2010s is due to their defense, especially the Kuechly-Davis Sr. duo. Being eight years older than his fellow teammate, Luke Keuchly, Thomas Davis Sr. came into the NFL in 2005, drafted by the Panthers with the 14th overall pick.

In 199 games in the league, Thomas Davis Sr. recorded 859 solo tackles, which places him at the 26th spot in the all-time rankings in the NFL. Despite two consecutive seasons plagued with injuries between 2010 and 2011, Thomas Davis Sr. was able to display greatness for most of his career and helped the defense lead the Panthers to the 2015 Super Bowl, when he was also voted into the First-team All-Pro. In his 15-year career, Thomas Davis Sr. totalled 18 forced fumbles and 13 interceptions, a staggering number for a linebacker.

With Cam Newton under center and Ron Rivera calling plays, the Carolina Panthers had one of the most entertaining offenses in the league for years. This is also greatly due to the offensive linemen duo made by center Ryan Kalil and offensive tackle Jordan Gross, who allowed Cam Newton to become one of the most unpredictable offensive weapons in the NFL.

A First-Team All-American, Ryan Kalil was selected by the Carolina Panthers in the second round of the 2007 NFL Draft and went on to play 12 seasons in Charlotte. Although he had to miss over 40 games due to injury in his Panthers career, Kalil was among the most reliable centers in the league offering unmatched pass and run protection for star quarterback Cam Newton. The University of Southern California graduate was voted twice to the First-Team All-Pro and once to the Second-Team All-Pro, while making it to the Pro Bowl team five times.

Drafted eighth overall in the 2003 NFL Draft, Jordan Gross immediately became a pillar of the Panthers offensive line. In his rookie season, Gross started showing his reliability, starting in every game and helping the team reach their first ever trip to the Super Bowl.

After their great Super Bowl run, the Panthers struggled to win games in the following seasons before going back to the playoffs in 2008 and winning the NFC South Division Title. Gross was a crucial piece of that side, as he was selected to the First-team All-Pro and made his first-ever Pro Bowl. Gross then went on to make two more Pro Bowl appearances, alongside his teammate Ryan Kalil, in 2010 and in his final season in the league in 2013. After his retirement, the Carolina Panthers, the only team he played for in his 11-season NFL career, honored Gross by inducting him in their Hall of Honor.

Following an inaugural season that ended with a 7-9 record, the Carolina Panthers drafted University of Michigan standout Muhsin Muhammad in the second round of the 1996 NFL Draft. After two seasons limited by injuries, Muhammad started putting his name along the best receivers in the league.

Muhammad’s breakout season came in 1999, when he reached 1,000 receiving yards for the first time in his career and made it to the Pro Bowl. He followed that with another 1,000-yard campaign before going on the greatest run of his career between 2003 and 2004. In 2003, Muhammad became a menace in the playoffs and even scored the longest receiving touchdown in Super Bowl history. Despite the Super Bowl loss, Muhammad stayed hot in the following season, leading the league in receiving yards and touchdowns, while earning his second Pro Bowl selection and his first and only First-team All-Pro honor.

Before Cam Newton was drafted by the Panthers and earned MVP honors in 2015, Southwestern Louisiana alum Jake Delhomme was regarded as the greatest quarterback in Panthers history. After going undrafted in the 1999 NFL Draft, Jake Delhomme spent five seasons between the New Orleans Saints and the Amsterdam Admirals, before being signed by the Carolina Panthers in the 2002 season. Following a poor start in the season by starting quarterback Rodney Peete, Delhomme was promoted to starting quarterback and led the team to their first Super Bowl run, following a 10-5 regular season record and the NFC South title. Delhomme formed a lethal connection with wide receiver duo Steve Smith Sr. and Muhsin Muhammad, which earned him a Pro Bowl selection in 2005. Delhomme left the Panthers in 2010 and, following his retirement in 2011, he was inducted into the Carolina Panthers Hall of Honor.

Tight end Greg Olsen closes out the top 10 of the greatest players in Panthers history. Brought on from the Bears in 2011, the University of Miami alum was one of Cam Newton’s main weapons during his career with the Panthers and dominated through the 2015 Super Bowl run.

Having played 14 years in the NFL and recording almost 9,000 yards, Greg Olsen is among the top tight ends of the 2010s, and is third all-time in receiving yards in Panthers history. The connection with Newton immediately proved to be lethal, as Olsen’s production skyrocketed with the Auburn alum under center. This led him to three consecutive campaigns between 2014 and 2016 with over 1,000 yards in the regular season. Olsen earned three Pro Bowl selections and was voted twice into the Second-Team All-Pro over those three years, while also putting up his best playoff performances.

Who is the best Carolina Panthers quarterback of all time?

Former Heisman Trophy winner Cam Newton is not only the greatest Carolina Panthers quarterback of all time, but he is also one of the best dual threat quarterbacks in the history of the NFL. During his Panthers career, Newton was one of the most dangerous quarterbacks in the league, leading the team to their second Super Bowl appearance in 2015 after a 15-1 regular season record, while earning NFL MVP, First-Team All-Pro and Pro Bowl honors.

Who is the best Carolina Panthers running back of all time?

Over the years, the Panthers have had many great running backs, but no one reaches the level displayed by Christian McCaffrey. After a great career at University of Stanford, the Carolina Panthers selected McCaffrey eighth overall in the 2017 NFL Draft. McCaffrey took the league by storm in his five-and-a-half years in Charlotte, earning First-Team All-Pro and Pro Bowl honors in the 2019 season while scoring a total of 50 touchdowns.

Who is the best Carolina Panthers wide receiver of all time?

In less than 30 seasons playing in the NFL, the Carolina Panthers have had some of the most exciting wide receivers in the league. Among them, Steve Smith Sr. is considered the greatest receiver in franchise history. Across 13 years in North Carolina, Smith Sr. made it to the Pro Bowl five times and twice to the First-Team All-Pro, having his best season in 2005, when he led the league in receiving yards.

Pages Related to Top 10 Carolina Panthers Players of All Time