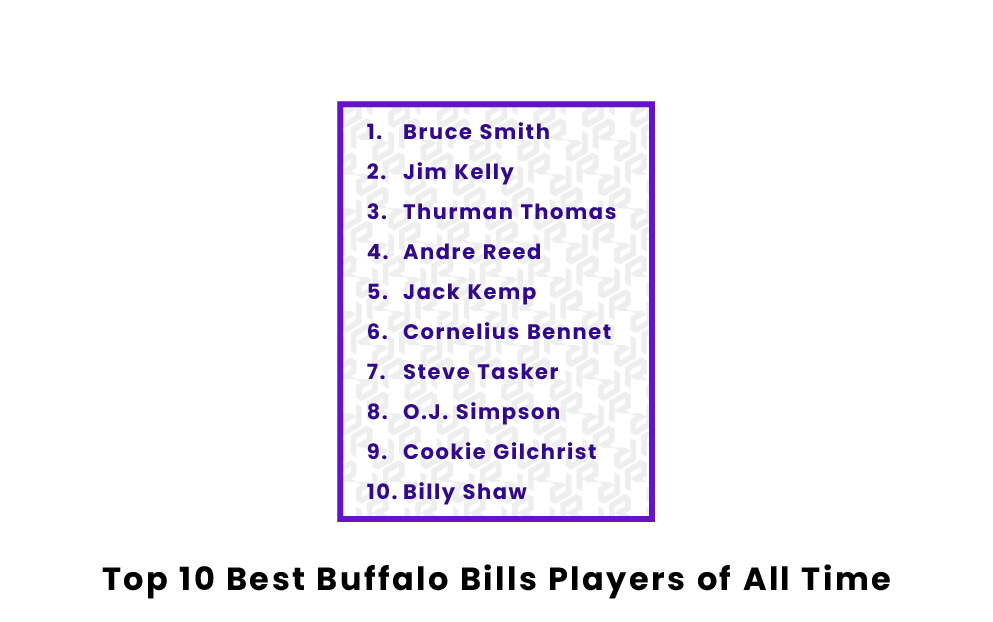 The Buffalo Bills are an American football team based in the metropolitan area of Buffalo, New York, that played their first season in 1959. With such a long history and standing in American football, it’s no surprise that the team has fostered numerous noteworthy players. Read on to learn about the ten best Buffalo Bills players of all time based on their achievements and contributions to their team.

Who are the best Buffalo Bills football players of all time?

Bruce Smith was born in Norfolk, VA, on June 18, 1963. He attended Virginia Tech and played college football, and from there, he was drafted into the Buffalo Bills in 1985, beginning his 15-season career on the team. While playing at Virginia Tech, he won the Outland Trophy for best linebacker in the country during his senior season. On the Buffalo Bills, he played defensive end and holds the NFL career record for quarterback sacks, with 200.

Smith played on the team the first time they went to the Super Bowl in 1990, where he became the fifth player ever to record a safety in the big game. He played in the 1992 Super Bowl, even after a knee injury, and once again in the team’s last Super Bowl in 1993. He was inducted into the NFL Hall of Fame in 2009.

Jim Kelly was born in Pittsburgh, Pennsylvania, on February 14, 1960. He attended college in Miami to play football and was drafted into the Buffalo Bills in 1986.

Throughout his career with the Buffalo Bills, he ran nearly a whopping 35,500 yards and scored 237 touchdowns. He played four consecutive Super Bowls from 1990 to 1993. He was the fifth quarterback to have a passer rating over 100 since 1973, and by the time he retired, he had an 84.4 passer rating, which is ranked sixth overall and second out of all Hall of Fame quarterbacks. In 2002, he was inducted into the Pro Football Hall of Fame.

Thurman Thomas was born on May 16, 1966, in Houston, Texas. He attended Oklahoma State University and was drafted into the Buffalo Bills in 1988, where he played as a running back for 12 remarkable seasons (until 1999).

Despite being a running back, he was one of the best receivers on the team. Coupled with his ability to run with the ball, he was a key player in the Bills’ offensive strategy. By 1991, Thomas was the 11th player to amass more than 2,000 all-purpose yards, and he reached 2,000 yards in the following season as well, marking a record fourth straight season of leading the NFL in yards.

Andre Darnell Reed was born on January 29, 1964, in Allentown, PA. He was a wide receiver for the Buffalo Bills, spending 16 seasons playing in the NFL after he played college football at Kutztown. He was drafted by the Bills in the fourth round of the 1985 NFL Draft.

Reed is considered one of the most prolific receivers in Bills’ history. He is the team’s leading receiver to date, with 941 receptions, which is 266 more than the number two spot. He also was a leader in many other categories, including yardage, where he ran 13,198 yards (sixth overall in the NFL), scored 86 touchdowns, and played 221 games. He was the starter in five AFC Championships and in four Super Bowls.

Jack Kemp was born July 13, 1935, in Los Angeles, CA. He attended Occidental College in California, where he was a quarterback. Kemp was chosen by the Detroit Lions in the 1957 NFL Draft but didn’t end up playing with them after he was released during the preseason. In 1962, he joined the Buffalo Bills, where he was a small but very effective player.

In 1963, he led the team to its first winning season and then to two AFL Championships in 1964 and 1965. He earned the AFL Player of the Year Award in 1965 and later was named the Most Valuable Player of the championship game of the same year. By the time Kemp retired from the game in 1969, he was AFL’s all-time leader in passing yards at a whopping 21,130. He went on to participate in politics and was the Republican congressional representative for suburban Buffalo in 1970. He passed away in May of 2009.

Cornelius O'Landa Bennett was born on August 25, 1965, and he was a linebacker in the NFL. He played for the Buffalo Bills from 1987 to 1995 and then went on to play with the Atlanta Falcons from 1996 to 1998 and the Indianapolis Colts from 1999 to 2000. He was drafted by the Buffalo Bills after playing college football in Alabama.

While playing college football, he was the first linebacker to earn the prestigious Lombardi Award, and his performance in college earned him a spot on Alabama’s All-Century team, making him a great candidate for the Bills. Throughout his career, he started in five Super Bowls, four of them being with the Bills. By the time he retired, Bennet had performed 27 defensive recoveries, which were the third most in NFL history. He was inducted into the NFL Hall of Fame in 2005.

Steve Tasker was born on April 10, 1962, in New York. He played college football at Northwestern and spent much of his pro career with the Buffalo Bills. He joined the Buffalo Bills midway through the season in 1986 as a wide receiver and became one of the top special teams cover men. He was admired greatly for his agility and kicking and tackling skills.

The coach of the Hall of Fame, Marv Levy, once called Tasker “one of the greatest special teams players to ever play the game” and praised his contributions to the Buffalo Bills. He retired at 35 in 1997 and was voted into the All-Time NFL Team in 2000. These days, Tasker works in sports entertainment, working as a commentator for CBS Sports, a host on Empire Sports Network, and a member of the WNSA broadcast lineup.

O.J. Simpson was born on July 9, 1947, in San Francisco, CA. He played college football at the University of Southern California, where he set multiple team records in the rushing category. He earned the nickname “Juice” due to his energy and the fact that his initials could mean “orange juice.”

He was drafted by the Buffalo Bills in 1969 with the first overall pick. He was traded to the San Francisco 49ers in 1978 but only played one season before his retirement in 1979. Throughout his career, he won several awards, such as being named NFL Player of the Year from 1972 to 1975 and being both All-AFC and All-Pro for five consecutive years. He was awarded the Heisman Trophy in 1968 and was inducted into the Pro Football Hall of Fame in 1985.

Carlton Chester "Cookie" Gilchrist was born on May 25, 1935. He was a part of the Buffalo Bills from 1962 to 1964, but he was one of the AFL’s most outstanding and beloved players. He came to the AFL after playing for the Canadian Football League (CFL) for six years, and he immediately began to set records upon entering the American football scene. He became the AFL’s first 1,000-yard rusher, scored 13 touchdowns, and earned himself  AFL Player of the Year honors. He was considered a very versatile player, specializing in both place-kicking and kick-offs.

One of the most notable games in his career was the 1963 match against the New York Jets, where he set the pro football record of 243 yards rushing and also became the fourth player to score five touchdowns in one game. He and Jack Kemp were crucial in the Bills’ winning the AFL Championship in 1964 after defeating the reigning champions. After this year, he was traded to Denver before retiring in 1967.

Billy Shaw was born William Lewis Shaw on December 15, 1938, in Natchez, Mississippi. He played football at Georgia Tech, and in 1961, he was scouted by both the Buffalo Bills and the Dallas Cowboys, the two teams belonging to the American Football League and the National Football League, respectively. Shaw chose to join the Buffalo Bills in the end, playing as a guard.

Even though Shaw only played with the Buffalo Bills from 1961 to 1969, he accomplished a lot on the team before his retirement from football in 1969. He was regarded as one of the best guards of his time and one of the best players on his team. The Bills’ games from 1962-1964 are still some of the team’s best years in terms of touchdowns, largely due to Shaw’s presence on the team. Shaw went on to play eight AFL All-Star games, was put onto the AFL All-Star team, and was inducted into the Pro Football Hall of Fame in 1999. He is the first Hall of Fame member to play his entire career in the AFL.

Who is the best Buffalo Bills quarterback of all time?

The best Buffalo Bills quarterback of all time is Jim Kelly. He was the fifth quarterback to have a passer rating over 100 since 1973. By the time he retired, he had an 84.4 passer rating, ranked sixth overall and second out of all Hall of Fame quarterbacks.

Who is the best Buffalo Bills running back of all time?

The best Buffalo Bills running back of all time is Thurman Thomas. He was a key player in the Bills’ offensive strategy. By 1991, Thomas was the 11th player to amass more than 2,000 all-purpose yards, and he reached 2,000 yards in the following season as well, marking a record fourth straight season of leading the NFL in yards.

Who is the best Buffalo Bills wide receiver of all time?

The best Buffalo Bills quarterback of all time is Andre Reed. He was considered the most prolific receiver in Bills’ history. Reed is the team’s leading receiver to date, with 941 receptions, 266 ahead of the number two spot. He was a leader in many other categories, as he ran 13,198 yards, scored 86 touchdowns, and played 221 games.

Pages Related to Top 10 Buffalo Bills Players of All Time