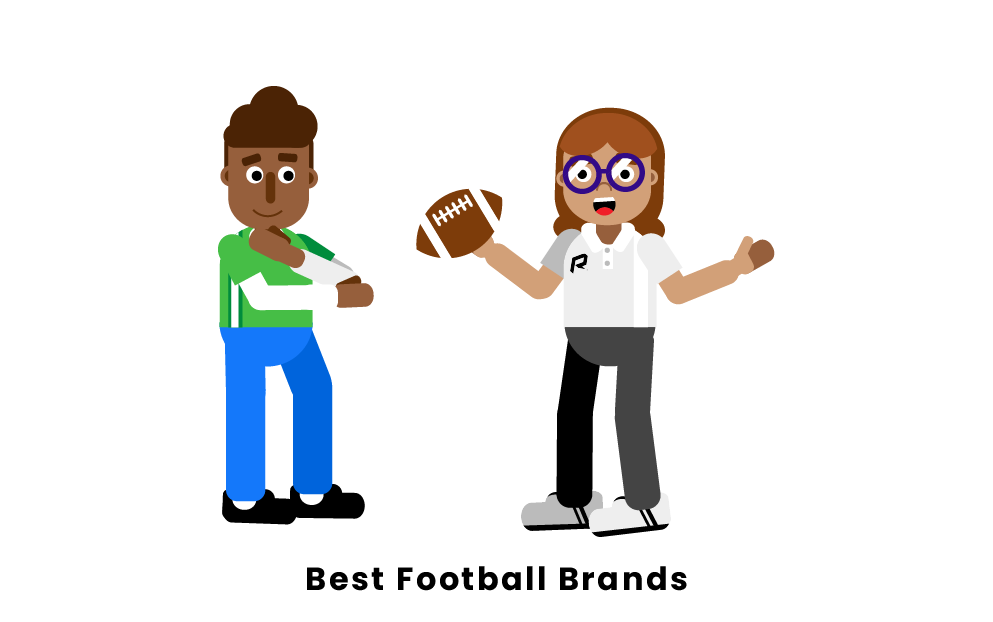 American football is a national pastime in the United States and leads in popularity when it comes to American spectator sports. This list is a compilation of the best football brands for equipment and apparel for players of all ages and skill levels.

What are the most popular football brands?

Nike supplies some of the world’s best football apparel and cleats. The company was founded as Blue Ribbon Sports but formally changed its name to Nike, Inc. in 1971. Nike’s logo features a curved check design known as the “swoosh,” which has become recognizable around the world. The company is based in Beaverton, Oregon, and has many retail and manufacturing stores in other countries. In regard to football, Nike specializes in apparel and cleats. The company gained great traction within the football industry when it reached a deal with the National Football League (NFL).

Under Armour is a major athletic apparel company that manufactures football apparel and cleats. The company was founded in 1996 when former University of Maryland football player, Kevin Plank, wanted an athletic shirt that would absorb sweat. Today, the brand is still headquartered in Baltimore, Maryland but has many additional offices in other countries. Under Armour sells many different styles of apparel for football, including undershirts, long sleeves, and compression shorts, all featuring sweat-absorbent material. Under Armour is a major sponsor of collegiate football, sponsoring teams such as the Auburn Tigers, Texas Tech Red Raiders, Maryland Terrapins, and the Notre Dame Fighting Irish. Current pro athletes who wear Under Armour include Tom Brady (QB Tampa Bay Buccaneers) and DK Metcalf (WR Seattle Seahawks).

Riddell Sports Group is a leading manufacturer of football helmets, pads, and other football-related equipment. The company was founded in 1927 by John T. Riddell, who was the coach of a high school football team. The company had two major innovations during its early years; the first was removable spikes for cleats, and the second was the plastic shell helmet which was invented in 1939. The company is headquartered in Rosemont, Illinois, and sells equipment worldwide.

Riddell is currently an authorized helmet supplier of the NFL, with nine models approved for NFL play. The brand also supports youth leagues such as USA Football and Pop Warner. Their Speedflex helmet is the most widely used and recognizable football helmet in the NFL and NCAA today. Peyton Manning was famous for wearing a Riddell helmet during his career and signed a deal with the company in 2017 to aid in product development.

Adidas is the second-largest sportswear manufacturing company in the world behind Nike, with the company’s products being most popular in Europe. The company was founded in 1949 in Germany by Adi Dassler. The Adidas logo features a three-stripe design that was created upon the brand’s 1949 release when the company unveiled its soccer cleats. Today, the company produces American football apparel and cleats alongside its extensive collection of sports apparel.

Schutt is another brand specializing in football helmets and pads. The company was founded in 1918 by Bill Schutt, with his featured product being the basketball net. In 1935 the brand was the first to mass-produce football facemasks, which were made mandatory for NFL play in 1962. Many NFL players still use Schutt helmets and shoulder pads for their high-quality reputation and performance. Their F7 model has grown in popularity over the last several years, rivaling even the famous Riddell Speedflex. Top NFL players that wear Schutt football gear include JC Jackson (CB Los Angeles Chargers), Alvin Kamara (RB New Orleans Saints), Ja’Marr Chase (WR Cincinnati Bengals), Saquon Barkley (RB New York Giants), and Travis Kelce (TE Kansas City Chiefs).

Xenith is one of the newer brands on this list, founded in 2006 by Vin Ferrara, a former Harvard University quarterback. After suffering numerous head injuries during his playing days, Ferrara believed there had to be better options for helmet safety. After three years of development and research, Xenith launched its first helmet in 2009. The company’s headquarters are in Detroit, Michigan. Production now includes shoulder plates, back plates, rib protectors, and visors. Xenith hopes to grow in popularity as the awareness of sports-related head injuries increases. Currently, Xenith has a partnership with Cleveland Browns running back Nick Chubb, who wears the Xenith helmet.

Cutters Gloves produces excellent athletic gloves for baseball & football, featuring their “C tack grip technology.” The company was founded by Jeff Beraznik in 1997, who was unsatisfied with the current football gloves on the market. He combined elements of industrial gloves with current models, leading to gloves with a higher performance model. The gloves are designed to withstand all types of weather and are even machine washable. Julio Jones (WR Tampa Bay Buccaneers) is one of the brand’s biggest partners in the NFL, wearing Cutter’s gloves every single game. Former star NFL wide receiver Andre Johnson has also spoken highly of the brand.

Wilson Sporting Goods makes footballs and previously provided uniforms for some NFL teams. It was originally founded as a meatpacking company, but in 1915, former president of the brand Thomas E. Wilson began to produce sporting equipment such as baseball shoes and tennis rackets. It was not until 1931 that the company was formally changed to Wilson Sporting Goods. The company gained major attention within the industry in 1941 when the NFL made Wilson the official ball of the league. The NFL continues to use Wilson game balls to this day, upholding their long-standing tradition.

Douglas Sports is a popular brand for football, producing shoulder pads, back plates, rib cage protectors, and other equipment and accessories. The company was founded in 1967 and initially manufactured industrial fabrics, but by the end of the 1970s, the company had started producing a wide range of sporting goods equipment. The brand specializes in shoulder pads and makes different designs for each player’s position, such as quarterbacks, wide receivers, and defensive backs. Seven-time Super Bowl Champion Tom Brady has been wearing Douglas shoulder pads since his days of playing at Michigan University and refuses to take to the field with anything else.

Battle Sports is the newest company on this list, founded in 2009, and specializes in football equipment. Battle Sports has gained popularity in recent years with its new mouthguard style and high-quality backplates. The company also produces athletic towels, chinstraps, and skull caps for football players. Many current NFL and NCAA players have begun using their equipment, and in doing so, have started a similar trend in youth sports.

In the 2019 season, Seattle Seahawks wide receiver D.K. Metcalf made his league debut wearing a mouthguard designed by Battle Sports to look like a pacifier. Battle Sports is known for its iconic mouthguards, which each feature unique designs and colors. The company recently reached a partnership agreement with Growth of a Game by becoming its official camp sponsor.

Air Jordan, a subsidiary brand of Nike, was founded in 1984 with the release of Michael Jordan’s first-ever signature basketball sneaker. While Jordan has been known as a basketball brand for the entirety of its lifetime, the brand has recently taken the football sponsorship market by storm. In recent years, Jordan Brand has become the official apparel supplier for numerous FBS College Football programs, including the University of Michigan, Oklahoma University, the University of North Carolina at Chapel Hill, and the University of California Los Angeles.

Notable NFL players Dak Prescott (QB Dallas Cowboys), Devante Adams (WR Las Vegas Raiders), and Stefon Diggs (WR Buffalo Bills) have also joined the “Jumpman” sponsorship team. Although Jordan does not yet produce football equipment for public sale, they are becoming one of the most recognizable uniform brands at the higher levels of football.

Founded in 1955 as a plastics manufacturer, Adams USA is a Tennessee-based company that supplies all sorts of protective athletic gear. In addition to mouthguards, they also sell helmets, shoulder pads, and pants. A part of the Schutt family of brands since 2011, Adams USA is a great choice for all of the small pieces of gear needed to play football, including chin straps, wrist coaches, girdles, gloves, and belts. They also make referee gear such as whistles.

What brand is the official jersey provider of the NFL?

As of 2012, Nike is the official jersey supplier of the NFL, taking the reins from fellow industry giant Reebok. Each of the NFL’s 32 teams wears the signature Nike swoosh on the shoulder area of their jerseys. The original deal between the NFL and Nike was worth $1 billion through 2020, but that deal has been extended through 2028 for an undisclosed amount of money.

What brand of football does the NFL use?

The NFL uses Wilson’s “The Duke” footballs and has since 1941. The NFL and Wilson have an extensive history through this partnership, and nearly every NFL great to ever take the gridiron has caught, thrown, or kicked Wilson footballs.

What helmets are recommended by the NFL?

Every season, the NFL and NFLPA work together to test all popular helmets on the market in order to provide recommendations on the safest helmets for football players. Each helmet is tested for its design, durability, and reduction of head trauma. In 2022, the brands that had the most highly-recommended helmets according to the NFL’s research were Schutt, Riddell, and Xenith.