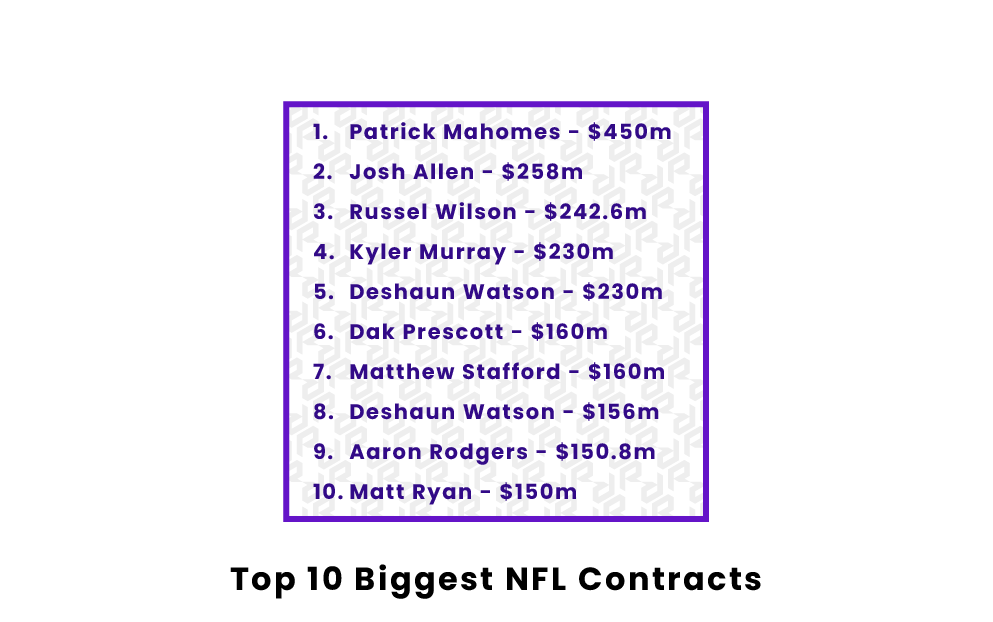 The NFL is a league of big price tags, and the norm for a contract has increased each year. Particularly since Patrick Mahomes’s 2020 deal, NFL teams have not been afraid to break the bank to keep their stars. This list details the 10 biggest NFL contracts, all of which were signed by quarterbacks.

What are the biggest NFL football contracts of all time?

Patrick Mahomes’ $450 million deal tops the list, as the Chiefs locked up their superstar quarterback on July 6th, 2020. The deal came the summer after Mahomes and the Chiefs won the Super Bowl, which was Mahomes’ third full year in the NFL.

The deal raised eyebrows, as it was by far the biggest contract in NFL history. However, few people doubt that Patrick Mahomes is worth the money: he has been one of the best quarterbacks in recent history.

Josh Allen signed his $258 million deal on July 6th, 2021, exactly a year after Patrick Mahomes inked his record-breaking contract in 2020. Allen’s deal may not garner as much attention as Mahomes’, but he is earning just five percent less on a yearly basis: Mahomes makes $45 million, Allen makes $43 million. Allen’s deal is six years long, leaving him as a UFA in 2029. When Allen does hit free agency, he could potentially become the highest-paid NFL player.

Russel Wilson was traded to the Denver Broncos in the summer of 2022, ending his 10-year run with the Seattle Seahawks; the Broncos then signed Wilson to a five-year, $242.5 million extension.

Kyler Murray’s deal pays him $230 million over five years for an annual average of $46 million, which makes him the third-highest paid NFL player annually. Aaron Rodgers and Russel Wilson are the only two players paid more on a yearly basis than Kyler Murray.

Murray signed the deal after the conclusion of his third NFL season, at which point he had 70 passing touchdowns, 20 rushing touchdowns, and 34 interceptions. Murray is an incredible athlete: he poses a threat with the run and was selected in the top ten of the 2019 MLB draft.

Deshaun Watson earns the fifth spot on this list thanks to the $230 million deal Cleveland signed him to shortly after acquiring him from the Houston Texans. Watson was traded while his future in the NFL was unclear due to numerous allegations of sexual assault.

Despite the uncertainty surrounding Watson, Cleveland paid a King’s ransom for Watson, including three first-round picks and six total draft picks. The Browns then doubled down, signing Watson to this huge deal. The $230 million is guaranteed at signing, meaning Watson will get his money even if something like an injury keeps him from playing.,

Dak Prescott takes the number six spot on this list with a $160 million contract, despite being drafted in the fourth round of the 2016 NFL draft. Prescott’s deal was signed on March 9th, 2021. Football analysts believe Prescott benefited from the massive magnitude of Patrick Mahomes’ deal, which set the bar for quarterback contracts to come.

Prescott suffered a major injury in October 2020, jeopardizing his chances to sign a big deal with the Cowboys. Luckily, Dallas still believed in Prescott despite Prescott’s ankle fracture and signed him to a four-year deal just months later.

Matthew Stafford signed this four-year, $160 million deal with Los Angeles less than a month after hoisting the Lombardi trophy for the Rams. This contract was agreed upon partially to help the Rams’ short-term future. By extending Stafford, the Rams were able to restructure his contract, moving some of his earnings down the line a bit. In doing so, the Rams gained access to more cap space ahead of the 2022 season, giving them a better chance to defend their championship title.

Deshaun Watson actually gets two spots on this list for two different contracts; back when he was in Houston, Watson signed a $156 million deal on September 5th, 2020.

After being traded to Cleveland, the Browns gave Deshaun Watson a new deal, paying him $230 million in guaranteed money upfront. Compared to this deal from Houston, the Browns’ deal pays Watson an additional $7 million per year and is one year longer.

Aaron Rodgers’ three-year, $150 million contract is the biggest contract in terms of annual pay in NFL history. The deal shells out over $50 million a year to the veteran quarterback and will keep him employed through the 2026 season.

Rodgers signed the deal on March 8th, 2022. Just 10 days later, Rodgers’ number-one wide receiver, Davante Adams, was traded to the Las Vegas Raiders. Adams is considered to be among the best wide receivers in the NFL, and his absence left a giant hole in the Packers’ passing game.

The final quarterback on this list is Matt Ryan, who signed a five-year, $150 million dollar contract in May of 2018. When Ryan signed the contract, he was still playing for the Atlanta Falcons. He was traded four years into his deal and landed in Indianapolis. Ryan, 37 years old, is by no means a long-term plan for the Colts. Rather, they hope he can help them compete in the short term and they did not have to give up many assets to acquire him.

Who has the biggest NFL contract annually?

Aaron Rodgers gets paid the most on a yearly basis, making about $50.3 million per year on his current deal. Rodgers’ deal keeps him in Green Bay until 2027, when the Packers may be ready to move on from their franchise quarterback. The next highest annual earners are Russel Wilson, Kyler Murray, Deshaun Watson, and Patrick Mahomes.

Who has the biggest NFL contract of all time?

Patrick Mahomes has the largest NFL contract of all time, making $450 million over 10 years. Mahomes’ deal does not pay him an extraordinary amount per year, ranking only fifth of all time in annual pay. Rather, the deal locks up the quarterback for the entire prime of his career, not letting him hit the open market until 2032.