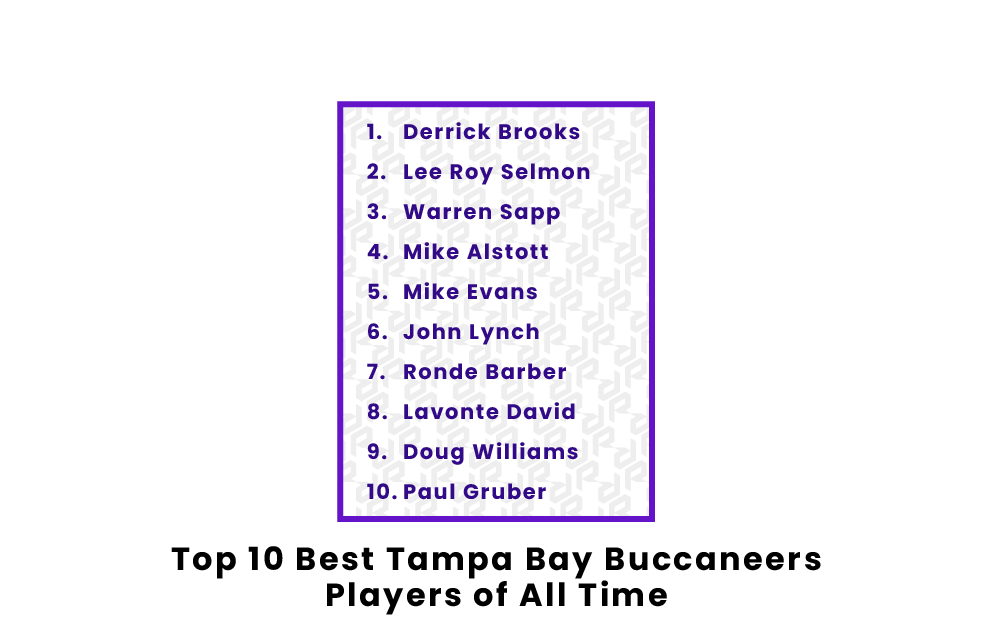 The Tampa Bay Buccaneers are a National Football League (NFL) team that first joined the league for the 1976 season. While they did not have much success initially (they lost their first twenty-six games between 1976 and 1977), they eventually turned the franchise around to win two Super Bowls (2003, 2021). During that time, the Buccaneers have had some incredibly talented players all over the field, and the top ten in team history are discussed below. It should be noted that any statics and awards mentioned encompass only the time the player spent with Tampa Bay.

Who are the best Tampa Bay Buccaneers football players of all time?

The greatest Tampa Bay Buccaneer of all time is Derrick Brooks. Brooks was a linebacker who played his entire career in Tampa Bay from 1995-2008. During those 14 seasons, Brooks made the Pro Bowl 11 times, was voted onto an All-Pro team nine times, and was awarded the AP NFL Defensive Player of the Year in 2002. Brooks was also a key contributor to the Buccaneers’ first Super Bowl-winning team in 2003. Throughout the three games in those playoffs, Brooks had two interceptions (including one that he returned for a touchdown in the Super Bowl), 17 tackles, and one fumble recovery. On the Tampa Bay Buccaneers’ all-time lists, Brooks has the most tackles (1,300), fifth most interceptions (25), second most defensive touchdowns (7), and fourth-most tackles for loss (68). In recognition of his outstanding career, Brooks was inducted into the Pro Football Hall of Fame in 2014.

The number two ranked player on this list also played defense for Tampa Bay. Lee Roy Selmon was a defensive tackle who played all nine of his NFL seasons for the Buccaneers from 1976 to 1984. Selmon was with Tampa from the very beginning of their franchise, so while he did not have much team success, he put up some great individual numbers. Selmon has the most sacks in Tampa history (78.5) and is tied for tenth in fumble recoveries with 10. Selmon would certainly rank high in the tackles and tackles for loss category; however, those stats did not begin to be tracked by the NFL until 1994 and 1999, respectively. As for the awards he won, he made it on to five All-Pro teams, was voted into six Pro Bowls, and won the AP NFL Defensive Player of the Year award in 1979. Like Brooks, Selmon’s career earned him an induction into the Pro Football Hall of Fame in 1995.

The first player on the list to play for another team in addition to Tampa Bay, Warren Sapp checks in at number three on the list. While Sapp played a few seasons at the end of his career with the Oakland Raiders, his best years were certainly with Tampa Bay. Like Selmon, Sapp was a defensive tackle, and he was with the Buccaneers from 1995-2003. In 1999, Sapp was voted AP Defensive Player of the Year, and he also made six All-Pro teams and seven Pro Bowls in his nine seasons with the team. During the team's Super Bowl run in 2003, Sapp had 1.5 sacks and five tackles in the three postseason games. On Tampa’s all-time lists, Sapp ranks second just behind Selmon with 77 sacks. Sapp also ranks sixth in tackles for loss (64) and fifth in fumbles forced (15). Like the previous two members on this list, Sapp is a member of the Pro Football Hall of Fame, being inducted in 2013.

The first offensive player on the list, Mike Alstott comes in at number four. Alstott was a running back/fullback who played all 11 of his NFL seasons for the Buccaneers from 1996-2006. He made four All-Pro teams and was a part of six Pro-Bowls during those 11 years. Alstott was an outstanding contributor right from the start, finishing third in the NFL Offensive Rookie of the Year voting in 1996. The third member of the 2003 Super Bowl championship team listed, Alstott rushed for 100 yards and scored four rushing touchdowns in the three playoff games. As far as all-time rushing leaders for Tampa Bay, Alstott has scored the most rushing touchdowns with 58, rushed for the second-most yards with 5,088, and played in the third-most games with 158. Although he never made it into the Hall of Fame, Alstott still had an outstanding career and deserves recognition on this list.

Number five on the list is Mike Evans, who is both our first listed wide receiver and first still-active player. Evans has been with Tampa Bay since 2014 and was one of their most important players during their run to the 2021 Super Bowl. In the four playoff games that season, Evans had 11 catches for 204 yards and scored two touchdowns. Moreover, in his first NFL season, Evans finished third in NFL Offensive Rookie of the Year voting, and he has since made four Pro Bowls, as well as All-Pro in 2016. On Tampa’s all-time receiving list, Evans has the most yards all-time with 9,301. This is by far the most in franchise history, as Mark Carrier is second with 5,018. In other categories, Evans has the most receptions with 606 (second is 430), the most receiving touchdowns with 75 (second is 34), and most yards per game at 76.2. Clearly, Evans is already the greatest wide receiver in franchise history, and he has a great chance to move up this list before his career is over.

The first secondary member and fourth member of the 2003 Super Bowl team, Ronde Barber is the number six player on the list. Barber was a defensive back/safety who played his entire career for the Buccaneers from 1997-2012. In those 16 seasons, Barber made five Pro Bowls and six All-Pro teams. Barber had perhaps his best season with Tampa Bay in 2001 when he led the league with ten interceptions. Overall, Barber has the most interceptions in team history with 47, as well as the second most tackles with 1,044, most interceptions returned for touchdowns with eight, and the most games played with 241. During the three playoff games in the 2003 season, Barber had two interceptions, returning one for a touchdown, as well as two fumbles forced and 11 tackles. Barber has yet to make it into the Pro Football Hall of Fame, although he still has a chance to and will certainly receive consideration due to his outstanding career.

Another member of Tampa Bay’s Super Bowl XXXVII championship team in 2003, John Lynch is the number seven ranked player on the list. Like Barber, Lynch played defensive back as well as safety for Tampa Bay from 1993-2003. During those 11 seasons, Lynch was on four All-Pro teams and made five Pro Bowls. During the 2003 Playoffs, Lynch made 10 total tackles and also defended two passes in the three postseason games. On Tampa’s all-time lists, Lynch ranks sixth with 23 interceptions, eighth with 42 passes defended, fifth in total tackles made with 541, and fifth with 154 games played. Lynch would go on to play four solid years at the end of his career with the Denver Broncos, and he was recognized for his outstanding play and leadership of those Tampa Bay and Denver defenses when he was inducted into the Pro Football Hall of Fame this past year in 2021.

Along with Mike Evans, Lavonte David is both the second active player on this list and the second member of the Super Bowl LV championship team from 2021. David is a linebacker who has played for Tampa Bay since 2012. During the 2021 playoffs, David had 26 tackles, one sack, and defended four passes in the four postseason games.  As for awards, in the 10 seasons he has played so far, David has been voted onto four All-Pro teams and was a member of the 2015 Pro Bowl. On the all-time lists, David has the most fumbles forced (26), third-most fumbles recovered (17), third-most tackles (869), twelfth-most sacks (26), and fifth-most passes defended (54). Like Evans, David certainly has a chance to move up this list and make a push for the Pro Football Hall of Fame as he continues to rack up more accolades and statistics throughout the rest of his career.

The first and only quarterback on this list, Doug Williams checks in at number nine. Williams makes this list due in large part to the role he played in turning Tampa Bay from a perennial loser into a playoff team. He played quarterback for the Buccaneers from 1978-1982, and he helped lead them to their first winning season (10 wins, six losses), first playoff appearance, and first playoff win in 1979. Williams was also a member of the NFL All-Pro team in 1978. On Tampa’s all-time passing lists, Williams ranks second with 33 wins, fifth with 12,648 yards, fifth with 73 touchdowns, and first in game-winning drives led with 14. Williams would likely be higher in some of the statistical categories for Tampa Bay; however, when Williams was a free agent in 1982, ownership did not want to pay him as much as he wanted, and thus he left to play the remainder of his career with Washington, with whom he won a Super Bowl in 1987.

The final member of this list, Hardy Nickerson was a linebacker who played for Tampa Bay from 1993-1999. Nickerson made five Pro Bowls and four All-Pro teams in those seven seasons, and he was honored as a part of the 1990s NFL All-Decade team. On the Buccaneers’ all-time defensive lists, Nickerson ranks fourth in total tackles (681), sixth in fumbles forced (13), and 12th in fumbles recovered (nine). In 1993, Nickerson had his best finish in the NFL AP Defensive Player of the Year award voting, when he finished in sixth place. In his postseason career with Tampa Bay, he had 25 total tackles, one interception, and one fumble forced in four games played. Another talented player who has yet to make it to the Pro Football Hall of Fame, we shall see if Nickerson’s career is recognized by those who vote for the Hall of Fame in the coming years.

While the 20 players listed below did not crack the top ten, they still deserve some recognition as honorable mentions. They are listed in alphabetical order by last name.

Who is the best Tampa Bay Buccaneers quarterback of all time?

Doug Williams is the best quarterback in Buccaneers history. Williams ranks top five in several key quarterback stats for Tampa Bay, including wins, passing yards, passing touchdowns, and game winning drives. Additionally, as was mentioned above, Williams helped to turn around the Buccaneers franchise after their terrible first few years.

Who is the best Tampa Bay Buccaneers running back of all time?

When looking at Tampa Bay running backs, Mike Alstott stands out as the best of all time. While there have been some talented rushers over the years for the Buccaneers, Alstott’s 58 rushing touchdowns scored are by far the most in franchise history (James Wilder is second with 37). As was mentioned above, Alstott also ranks second in rushing yards and third in games played for running backs. Clearly, Alstott stands out amongst all Tampa Bay running backs.

Who is the best Tampa Bay Buccaneers wide receiver of all time?

There is little doubt that even though his career is still going, Mike Evans is already the best wide receiver in Buccaneers history. Evans has by far the most receiving yards, receiving touchdowns, and receptions in franchise history, and he also has the highest yards per game played of any player. When his career is all said and done, Evans has a chance to be even higher than the fifth-place spot he currently occupies on this list.