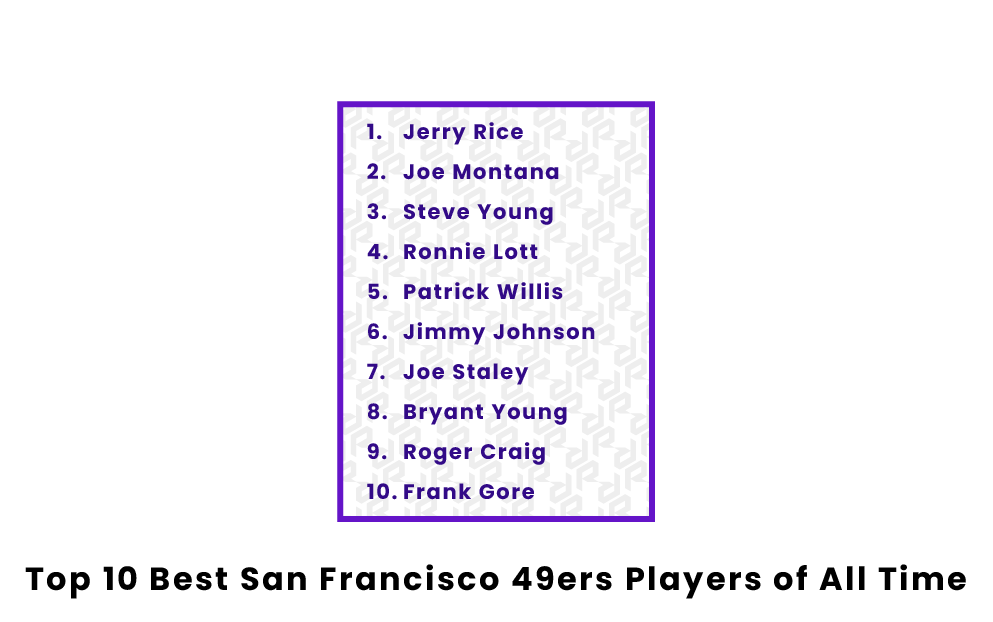 Home of the red and gold, San Francisco has always demanded a golden standard of football from its players. With five Super Bowl wins and plenty of Hall of Famers, there’s no shortage of great players that have worn the 49ers jersey. Keep reading below to learn more about the top ten best San Francisco 49ers of all time.

Who are the best San Francisco 49ers football players of all time?

When Jerry Rice came to the Bay Area in 1985, 49ers fans had no idea just how good he’d become. Not just the greatest 49er of all time, Rice is also considered by many to be the best wide receiver in NFL history. He certainly has the stats to back it up: he is first all-time in catches, receiving yards, and receiving touchdowns, and many of his records are considered unbreakable. Rice was flat-out dominant in San Francisco, going to the Pro Bowl in 13 of his 16 seasons there and also being named to 11 All-Pro teams (the most in franchise history). He won three Super Bowls with the 49ers and was named Super Bowl MVP in 1989. Rice was also a two-time Offensive Player of the Year, winning the honor first in 1987 and again in 1993. He is a member of both the Hall of Fame All-1980s and All-1990s Teams, and he was a no-doubt Hall of Fame induction in 2010.

While Rice was great, when many fans think of the 49ers franchise, they think of Joe Montana. Nicknamed “Joe Cool,” Montana was the epitome of the word when he stepped on the field. In just his third year, he finished as runner-up in the MVP voting and was nominated as both an All-Pro and a Pro Bowler. The next year was a shortened season, but when the NFL returned to normal, Montana began lighting up the league. From 1983-1990 he was one of the game’s best quarterbacks, earning seven Pro Bowl selections and four All-Pro nominations. He was one of the game’s best precision passers, leading the NFL in completion percentage five times during that span. The 80s were truly Montana’s decade, as he captained the 49ers to four Super Bowls in the decade, with the last coming in 1990. The end of the decade was truly a great time for Montana, as he won back-to-back MVPs in 1989 and 1990, and was also the Offensive Player of the Year in 1989.

As great as Joe Montana was, there came a point when the 49ers had to make a decision at the quarterback position. In 1991, fresh off a Super Bowl win, San Francisco turned to Steve Young as their new head man. It was a switch that shocked fans all over, but it proved to be a great choice. Young quickly developed into one of the best slingers in the game, and in his first full season as a starter in 1992, he won the MVP award. Young was also named the Offensive Player of the Year, but he wasn’t done there. In 1994 he was the league’s MVP once again, leading all quarterbacks in completion percentage and touchdown passes. That postseason, Young led the 49ers to a Super Bowl win and was given the game’s MVP award. Overall, he was a seven-time Pro Bowler and a six-time All-Pro selection, and he was one of the game’s first great dual-threat quarterbacks who could hurt defenses with both his arm and his legs.

While San Francisco had Joe Montana leading their offense in the 80s, they also had Ronnie Lott to anchor their defense. Lott began his career as a cornerback in 1981 and was immediately successful, being named to the All-Pro First Team and earning a Pro Bowl selection. He would make the Pro Bowl in each of his next three seasons, but his career really took off when the 49ers moved him to the free safety position. There, Lott’s full talent was unleashed, and in 1986 he led the league in interceptions with 10. From 1986-1991 as a safety, Lott made six-straight All-Pro teams and was also a Pro Bowler six consecutive times. He helped the 49ers win four championships during the 80s alongside Montana, and was later named to the Hall of Fame All-1980s Team (as well as the All-1990s Team).

When it comes to linebackers in a 49ers uniform, no one was better than Patrick Willis. The tough-nosed Willis came into the league in 2007, and his potential was put on display right away. He won the Defensive Rookie of the Year award and led the league in tackles. Willis was also an All-Pro First Team selection and Pro Bowler that year. From 2007-2012, Willis was an All-Pro and Pro Bowler every year, and he also made the Pro Bowl for the seventh time in 2013. He led the league in tackles again in 2009 and was routinely among the top linebackers in the game. Willis was at the top of his game heading into the 2014 season, but things went south quickly. He dealt with injuries and ended up retiring at the age of 29 following that year, putting an end to what was on track for a Hall of Fame career. Still, he was honored on the Hall of Fame All-2010s Team and will be remembered in San Francisco forever.

Playing just before the 49ers became the powerhouse of the NFL in the 1980s, Jimmy Johnson was one of the franchise’s greatest defensive backs ever. His first few years in the league were somewhat quiet, but in his fifth season in 1965, he was named an All-Pro, an honor he would repeat the following year. In 1969, Johnson made his first Pro Bowl appearance, and he would go on to make it back to the event in each of the next three seasons. During that span, he was also a three-time All-Pro First Team selection, as he developed into one of the game’s best cornerbacks. He made one more Pro Bowl appearance in 1974 before finally retiring in 1976 after 16 seasons. He is second all-time amongst all 49ers in interceptions with 47 and is first among all defensive players in games played with 213. Johnson was also named a member of the Hall of Fame All-1970s Team.

The most consistent force in a turbulent time for the 49ers franchise, Joe Staley is the greatest offensive lineman to ever play for San Francisco. Though he was a part of many losing seasons, Staley’s talent was always evident to the rest of the league. His ability to move quickly and gracefully at such a big size, combined with his elite strength, made him one of the game’s best left tackles and helped revolutionize the tackle position to what is seen in the modern NFL. He was a solid player his first few years in the NFL, but his best stretch came from 2011-2015. In that time, Staley made five Pro Bowls and three All-Pro teams, establishing himself as one of the premier offensive linemen in the game. He retired in 2019 with the 11th-most games played in franchise history, and he remains the best left tackle to suit up for the 49ers.

Possibly the best edge rusher ever for the 49ers, Bryant Young was a force to be reckoned with in the mid-90s and early 2000s. He debuted in 1994 and was one of the league’s top rookies, finishing third in the Defensive Rookie of the Year voting. Two seasons later, Young established himself as one of the best defensive ends in all of the NFL, recording 11.5 sacks and being selected as both a Pro Bowler and an All-Pro. Over the course of the next six seasons, Young was great, making three more All-Pro teams as well as three more Pro Bowl appearances. In 1999 he won the NFL’s Comeback Player of the Year award, and he was also named to the Hall of Fame All-1990s Team. Young’s 89.5 career sacks are the second-most of any 49er ever, and in 2022 he was inducted into the Hall of Fame.

When it comes to the debate of who the greatest running back in 49ers history is, there are really two correct answers. Roger Craig, the team’s lead stallion of the 80s and early 90s, is certainly one of those answers. Though he never put up monster rushing numbers, Craig’s ability to catch out of the backfield separated him from many of the other running backs of his era. He totaled just over 1,000 receiving yards in his first two seasons combined, but in 1985, he really broke out. Craig rushed for 1,050 yards, but he also led the league in receptions with 92 and had over 1,000 receiving yards. He finished his career third among all 49ers in catches and 11th in receiving yards, and is also third in rushing yards. He was a two-time All-Pro and a four-time Pro Bowler, and in 1988 he won the Offensive Player of the Year award. Craig is also a member of the Hall of Fame All-1980s Team.

While many fans peg Craig as the franchise’s top back, it’s not uncommon to hear someone say Frank Gore was the best to ever come out of the San Francisco backfield. The franchise’s all-time leading rusher with 11,073 rushing yards in a 49ers uniform, Gore was the face of many San Francisco teams during his 10-year career. He began his tenure in San Francisco in 2005 with limited playing time, but when he transitioned to full-time starter, he began to dominate. In 2006, Gore rushed for nearly 1,700 yards and was selected to the All-Pro Second Team, as well as his first Pro Bowl. During his decade as a 49er, Gore ran for over 1,000 yards eight times, only missing the mark in his rookie year and in 2010, when he played only 11 games. Overall, he was a five-time Pro Bowler and is a member of the Hall of Fame All-2010s Team. Recently retired, Gore is likely to make the Hall of Fame as the NFL’s third all-time leading rusher.

These 20 players didn’t make the top 10 list above, but they still contributed massively to the storied history of the 49ers, and they are listed below in alphabetical order by last name:

Who is the best San Francisco 49ers quarterback of all time?

The best San Francisco 49ers quarterback of all time is Joe Montana. With four Super Bowl wins and two MVP awards, it’s hard to argue against Montana as being one of the greatest passers in NFL history. He was a five-time All-Pro selection and was named to the Pro Bowl eight times, and he also won the Offensive Player of the Year award in 1989.

Who is the best San Francisco 49ers running back of all time?

The best San Francisco 49ers running back of all time is Roger Craig. A two-time All-Pro and four-time Pro Bowler, Craig was crucial to the 49ers’ success during the 80s and early 90s as the team’s lead back. He was a true dual-threat option, totaling great rushing numbers and great receiving numbers during his eight years in San Francisco. Just before Montana won the award in 1989, Craig was named the Offensive Player of the Year in 1988.

Who is the best San Francisco 49ers wide receiver of all time?

The best San Francisco 49ers wide receiver of all time is Jerry Rice. While there’s no question Rice was the greatest receiver to ever play in San Francisco, many argue that he is also the best wide receiver in the history of the NFL. He is first all-time in league history in catches, receiving yards, and receiving touchdowns, and some of his records are considered unbreakable even in today’s game.