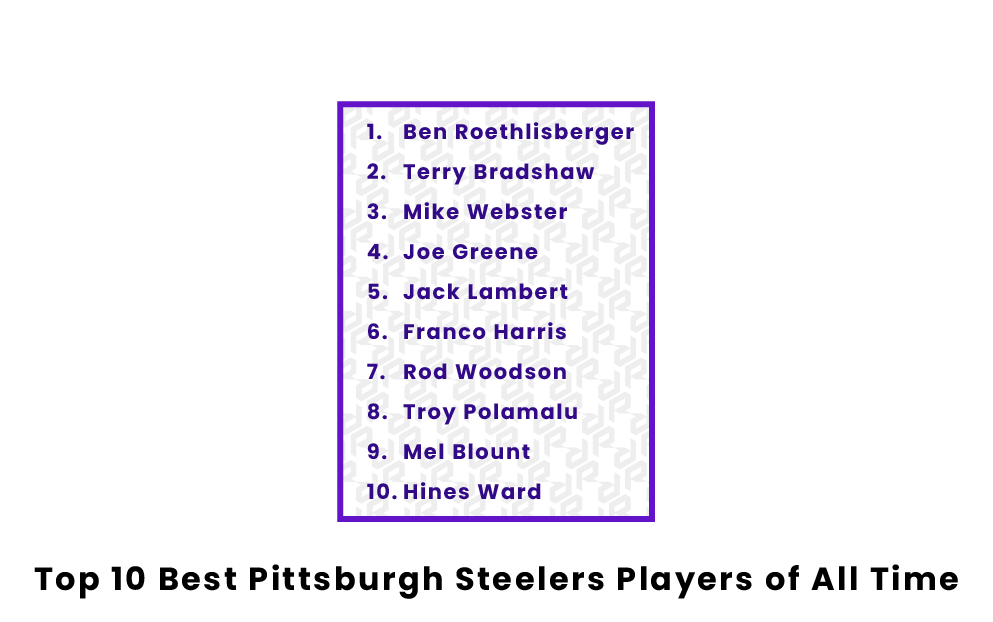 The Pittsburgh Steelers are one of the most storied franchises in NFL history. With six Super Bowl rings, several defensive superstars, and even a few MVPs, the team has seen generational talent pass through the Steel City. Keep reading below to learn more about the top ten Pittsburgh Steelers of all time.

Who are the best Pittsburgh Steelers football players of all time?

For many fans, there is no name more synonymous with the Pittsburgh Steelers than that of Big Ben or Ben Roethlisberger. Taking over in 2004 as a young franchise quarterback, Roethlisberger had immediate success, winning Rookie of the Year for that season and leading his team to a Super Bowl win in 2006. Three years later, the burly pocket passer led another epic season that went all the way to the championship game, where Roethlisberger and the Steelers won their second Super Bowl of the decade. The Miami, Ohio product is the franchise’s all-time leader in every passing statistic imaginable, from completions to touchdowns to yards. He also has the highest rating of any quarterback to ever wear the uniform at 93.5. Roethlisberger was a six-time Pro Bowl selection and will likely be elected to the Hall of Fame when he becomes eligible.

Before Roethlisberger became one of the most beloved quarterbacks in Steeler history, there was another man at the helm of the team who helped the black and gold dominate. Terry Bradshaw made his debut in 1970, and the next decade would be the franchise’s most successful ever. He led the team to a Super Bowl win in 1975, the team’s first ever. The following year, Bradshaw and the Steelers came back to repeat as Super Bowl champions. 1978 was Bradshaw’s best year, as he won NFL MVP honors while commanding a great team. The Steelers went to the Super Bowl again, and Bradshaw was named Super Bowl MVP, winning his third championship with the franchise. The following year, Bradshaw only finished fourth in MVP voting, but the playoffs went much the same way; the Steelers won title number four, and Bradshaw won his second Super Bowl MVP.

Mike Webster is the best offensive lineman to ever play for the Pittsburgh Steelers. Primarily operating as the team’s center, Webster was instrumental in Pittsburgh’s four Super Bowl runs of the 1970s. He was selected to the Pro Bowl twice and was also a two-time All-Pro in the decade, but he had plenty more left in the tank. The following decade, Webster became one of the game’s best, making seven Pro Bowls and being named to an All-Pro team four times. He is a member of both the Hall of Fame All-1970s Team and the All-1980s team, highlighting his dominance in both decades. He was the offensive line leader during his time in Pittsburgh and is second all-time in franchise history in approximate value, a number used to measure a player’s impact on the game throughout their career.

Joe Greene is easily the Steelers’ greatest defensive lineman to ever step on the field. In his first season in 1969, Greene won the Defensive Rookie of the Year award, the first of many honors he would receive in the NFL. He was selected to the Pro Bowl in 10 of his first 11 seasons, and in the only year in which he didn’t make it, he was named to the All-Pro First Team. Greene was a six-time All-Pro player, tied for the second-most selections in franchise history. In 1972, Greene recorded 11 sacks and won the Defensive Player of the Year award, arguably his best season ever. Two years later, Greene was once again in top form, registering nine sacks and winning Defensive Player of the Year for the second time in his career. He is a member of the Hall of Fame and the Hall of Fame All-1970s team.

Truly one of the great linebackers of his generation, Jack Lambert was the captain of the Steelers’ defense during the team’s incredible run in the 1970s. It all started in 1974 when Lambert won the Defensive Rookie of the Year award. The following season, the middle linebacker began his run of Pro Bowl selections, being named to the event for nine straight years. During that stretch, Lambert was among the best in the game on the defensive side of the ball, being named an All-Pro seven times and winning the Defensive Player of the Year award in 1976. He finished in the top seven in Defensive Player of the Year voting six times and helped the Steelers win four Super Bowls during his time in Pittsburgh. Like Webster, Lambert was later named to the Hall of Fame All-1970s and All-1980s Teams, one of only three Steelers to appear on a Hall of Fame team for multiple decades.

Franco Harris is one of the Steelers’ all-time rushing leaders. He is the franchise’s top player in rushing yards and touchdowns, and he is the best running back to ever play for the Steelers. Following the trend for young and talented Pittsburgh players of the 1970s, Harris was recognized by the NFL in his first season, winning Offensive Rookie of the Year in 1972 while also making his first Pro Bowl. He would go on to be selected to the Pro Bowl in each of the next eight seasons, and during that time, he was selected All-Pro three times. Harris is a member of the Hall of Fame All-1970s Team, and in 1990 he was elected to the Pro Football Hall of Fame. His catch in the 1972 playoffs will go down as one of the most famous in history, and he also won a Super Bowl MVP in 1974.

The most decorated player in Steelers history, Rod Woodson, is one of the greatest defensive backs ever. He debuted in Pittsburgh in 1987, and within a few years’ time he was already a man to be feared in the secondary. He was both a Pro Bowler and an All-Pro in 1989, and his legendary career was just starting. Woodson was named to the Pro Bowl in six of the next seven seasons, only missing out on the event in 1995 when he was injured. Overall, he made 11 Pro Bowls and was a seven-time All-Pro. In 1993, Woodson was spectacular, winning the Defensive Player of the Year award. He finished second in Defensive Player of the Year voting the following year but still managed both Pro Bowl and All-Pro honors. He is fourth of all time in franchise history in interceptions and fifth in tackles.

Besides Roethlisberger, there may be no other player that modern Steelers fans resonate with more than Troy Polamalu. The hard-hitting safety redefined the position during his career, playing closer to the line of scrimmage than most other defensive backs and striking fear into offensive players. Though he only played 12 seasons, his resume is among the franchise’s best. His six All-Pro selections are tied for the second-most of any Steeler ever, and he was also an eight-time Pro Bowler. He won a pair of Super Bowls alongside Roethlisberger in the 2000s and was named to the Hall of Fame All-2000s Team. He started the following decade strong, winning the Defensive Player of the Year award in 2010 after being injured for most of the previous season. Though Polamalu was forced to retire at the age of 33 due to concussions, he still remains one of his era’s most legendary players, and he was inducted into the Pro Football Hall of Fame in 2020.

One of the many Hall of Famers who played on the legendary Steelers squads of the 1970s, Mel Blount was one of the franchise’s first star cornerbacks. His first five years in the NFL were relatively uneventful except for a Super Bowl win, but in 1975 he burst into the national spotlight. Blount led the league with 11 interceptions and was selected to his first Pro Bowl, and named to the All-Pro First Team. Blount also won the Defensive Player of the Year award that season, and he capped it all off with a second Super Bowl win. Over the next six years, Blount became one of the game’s best corners, being named to four more Pro Bowls and three more All-Pro teams. Overall, his 57 career interceptions are the most of any Steeler ever, and he was crucial to the success of the Pittsburgh defense during the 1970s and 80s.

Though he may not have as complete of a resume as some of the other names on this list, Hines Ward undoubtedly greatly impacted Pittsburgh football. The wide receiver leads the franchise in just about every receiving category, and he did it over 14 miraculous seasons. Ward is first in catches, receiving touchdowns, and receiving yards among all Steelers, but his career was about more than the numbers. In 2006 with a young quarterback at the helm, Ward was the veteran presence that the Steelers needed on the outside, as he helped Roethlisberger and the rest of the team win the Super Bowl. Ward was named Super Bowl MVP that year and was a pillar of the offense when they won again in 2009. He was a three-time All-Pro selection and made four Pro Bowls during his career.

Who is the best Pittsburgh Steelers quarterback of all time?

The best Pittsburgh Steelers quarterback of all time is Ben Roethlisberger. This question is hard to answer since Terry Bradshaw was also a terrific player in his own right. However, Roethlisberger was the more talented of the two, and his two Super Bowl wins undoubtedly help his case. Big Ben was also a six-time Pro Bowler, and leads the franchise in every passing stat imaginable.

Who is the best Pittsburgh Steelers running back of all time?

The best Pittsburgh Steelers running back of all time is Franco Harris. Harris was a bruiser of a running back, but he also had plenty of skill to go with his large frame. He was a three-time All-Pro selection and also is part of the Hall of Fame All-1970s Team. Harris helped the franchise win four Super Bowls and is first in rushing attempts, yards, and touchdowns in team history.

Who is the best Pittsburgh Steelers wide receiver of all time?

The best Pittsburgh Steelers wide receiver of all time is Hines Ward. Unquestionably the best at the position in franchise history, Ward was also one of the game’s premier receiving threats during the prime of his career. A three-time All-Pro and two-time Super Bowl winner, Ward leads all Steelers in receptions, receiving yards, and receiving touchdowns, and in 2006 he won Super Bowl MVP.