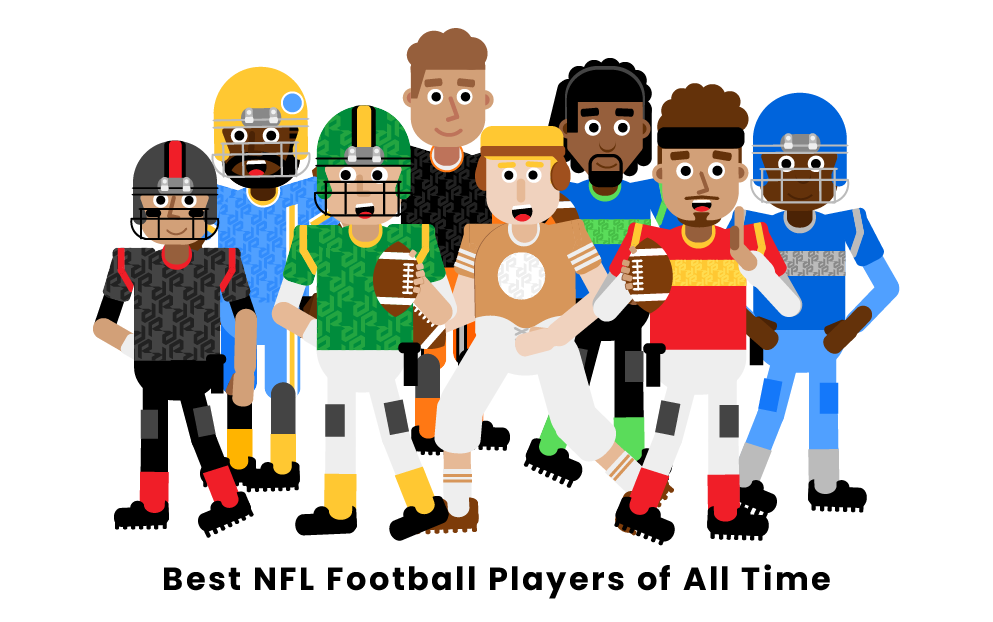 Over 26,000 men have played in the NFL since the league came about over 100 years ago. There have been many great players, but less than 400 are currently in the Pro Football Hall of Fame. Below is a list of the cream of the crop players that have ever set foot on an NFL field.

Who are the best NFL football players of all time?

There’s an argument to be had that Tom Brady has had three separate Hall of Fame careers during his career. From making his first start in 2001 up until after the 2006 season, Brady won three Super Bowls and led the league in both passing yards and touchdowns once. Then from 2007-13, Brady appeared in two Super Bowls, was named MVP twice (2007 and 2010), and threw for a then-record 50 touchdowns in 2007. Finally, from 2014-2021, Brady appeared in five Super Bowls, winning four of them. Overall, Brady has achieved a level of success that’s unparalleled in NFL history. His seven Super Bowl wins are more than any franchise in the league, and he’s one of just four quarterbacks to start a Super Bowl for multiple teams (New England Patriots and Tampa Bay Buccaneers). Brady has made an NFL record 15 Pro Bowls and is the NFL’s all-time passing yards and touchdowns leader. For all those reasons, Tom Brady is the greatest football player of all time.

Perhaps no player has ever been more dominant at a specific position in NFL history than Jerry Rice. By almost all metrics, Rice is still considered to be the most dominant wide receiver ever since he retired in 2006. Playing in Bill Walsh’s West Coast offense, Rice capitalized on his ability to run after the catch as he led the league in both receiving yards and touchdowns six times during his 20-year career. However, his greatest attribute was his knack for elevating his game in the biggest moments. In four Super Bowl appearances with the San Francisco 49ers and Oakland Raiders, Rice's team won three of them, and he caught 33 passes for nearly 600 yards and eight touchdowns. He was also named Super Bowl XXIII MVP. Rice wasn’t the biggest, nor was he the fastest receiver, but he is largely considered to be the gold standard of the position.

Jim Brown was a runner unlike any ever seen when he first stepped on the field for the Cleveland Browns in 1957. Brown had the size of a linebacker and could run like the wind, as shown in his statistical production. In Brown’s nine seasons, he led the league in rushing yards eight times and retired as the all-time rushing yards leader (12,312) in 1965. Brown appeared in three NFL Championships and won in 1964, as he played in an era before the Super Bowl. Brown is also the only ball carrier in league history to average over 100 yards per game. However, his career is more known for the fact that he retired at the heart of his prime. He once again led the league in rushing yards and touchdowns in 1965, but a contract dispute ultimately caused him to hang up the cleats earlier than anyone expected.

There are only two players in NFL history to win the MVP award as a defensive player: Alan Page in 1971 and Lawrence Taylor in 1986. Taylor redefined the edge rusher position, as the traditional strategy of putting the running back on that position proved to be extremely ineffective against Taylor. Taylor’s two defining moments both show how he changed both the linebacker and left tackle position forever and his ability to make the big play when his team needed him most. First, in 1985, Taylor infamously ended Washington quarterback Joe Theismann’s career on a sack in which he beat the left tackle. That position is now referred to as the “Blind Side Tackle.” Then during the 1990 New York Giants Super Bowl run, Taylor recovered San Francisco 49ers running back Roger Craig’s fumble late in the 4th quarter of the NFC Championship Game. New York would end up kicking the game-winning field goal on the ensuing drive as time expired.

The duo of Joe Montana and Jerry Rice is arguably the greatest quarterback and wide receiver duo in NFL history. From 1985-92, Montana threw 67 touchdowns to Rice and won both his league MVPs while playing with the Hall of Famer. But before Rice, Montana was already on his way to the Pro Football Hall of Fame. Joe Cool led the San Francisco 49ers to two Super Bowls in 1981 and 1984, winning the game’s MVP in both. Ultimately, his career in San Francisco ended after the 1992 season as he was subsequently traded to the Kansas City Chiefs. While with Kansas City, Montana showed he still had juice left in the tank, making the Pro Bowl in 1993 as well as leading the team to the AFC Championship Game. Montana was enshrined in the Pro Football Hall of Fame in 2000 as the NFL’s then career passer rating leader.

In 2011, Peyton Manning’s career nearly ended after having neck surgery, but from 1998-2010, Manning turned the Indianapolis Colts from a laughing-stock organization to one of the premier teams in the NFL. Manning led Indianapolis to the playoffs in just his second season and would only miss it once more in 2001. Manning was a four-time league MVP for the Colts, and in 2006, The Sheriff finally broke through and won the Super Bowl along with being named the MVP of the game. However, his career appeared to be in jeopardy in 2011 due to a neck injury, but Manning proved the doubters wrong after signing with the Denver Broncos, winning the Comeback Player of the Year award in 2012 and another league MVP in 2013. In his fourth and final season with Denver, Manning walked away from the game as a champion and was the all-time leading passer at the time.

Don Hutson was one of the biggest names in the NFL within the league’s first 25 years. In just 11 seasons, he won the receiving triple crown five times, including four years in a row from 1941-44. His speed was unmatched by other players in that era as he retired, averaging over 16 yards per reception. But Hutson wasn’t just a great receiver. In the 1930s-40s, NFL players played both offense and defense. As a defender, The Alabama Antelope tallied 30 career interceptions and led the league in that category in 1940. Hutson is arguably the most dominant player at any position, and he was recognized as such, becoming a charter member of the Pro Football Hall of Fame in 1963.

There were concerns about Anthony Muñoz’s health heading into the 1980 NFL Draft. But, Muñoz quickly rewarded the Cincinnati Bengals, who took the Hall of Fame tackle third overall. Muñoz proved to be a once-in-a-generation offensive lineman, making the Pro Bowl in 11 of his 13 seasons and earning nine First-Team All-Pro selections. He was a key contributor to both Super Bowl appearances the Bengals made in 1981 and 1988, but unfortunately they lost in close matchups to the San Francisco 49ers. However, Muñoz’s legacy isn’t about his losses. Rather, it’s that he is the definition of what an offensive lineman is supposed to be like in the NFL.

Walter Payton is perhaps the most complete running back in NFL history. Payton could run with power and grace, catch like a wide receiver, and throw like a quarterback. He was the ultimate swiss-army knife for the Chicago Bears from 1975-87. Sweetness’ defining moment came during his 1977 MVP season. Before a week 10 game against the Minnesota Vikings, Payton was experiencing flu-like symptoms and had a fever over 101 degrees. However, that didn’t stop Payton from rushing for a then NFL record 275 yards and scoring the only touchdown of the game, as Chicago won 10-7. Then in 1985, Payton was the catalyst of one of the greatest teams ever as he finished second in league MVP voting en route to the only Super Bowl victory of his career.

There are very few players that have ever been more consistent than Reggie White. In 15 seasons, White recorded double-digit sacks in 12 of them and led the league in that category twice. He was an eight-time First-Team All-Pro, and famously earned the nickname “The Minister of Defense.” However, a Super Bowl title eluded White for many years. From 1985-92, White’s Philadelphia Eagles never made it past the NFC Divisional Round. But White would sign with the Green Bay Packers in 1993 and help lead Green Bay to a Super Bowl championship in 1996. In that game, Reggie was a terror all night long, sacking New England Patriots quarterback Drew Bledsoe three times. The Packers would make the Super Bowl again the following season but ultimately fell short of the repeat to the Denver Broncos.

Who is the best NFL football player of all time?

Quarterback Tom Brady is widely regarded to be the greatest football player of all time due to his incredible individual statistics and team success. Brady is a seven-time Super Bowl Champion and has appeared in the big game an NFL record ten times. Brady is also a three-time league MVP and 15-time Pro Bowler.

Who has won the most NFL Championships?

Tom Brady not only has the most Super Bowl championships by any player in NFL history, but he also owns the record for most overall titles as well. Prior to 1966, the NFL’s final game was known as the “NFL Championship.” Legends such as Otto Graham and Sammy Baugh never played in a Super Bowl because they played before the Super Bowl existed. Even so, Brady owns the most championships ever.