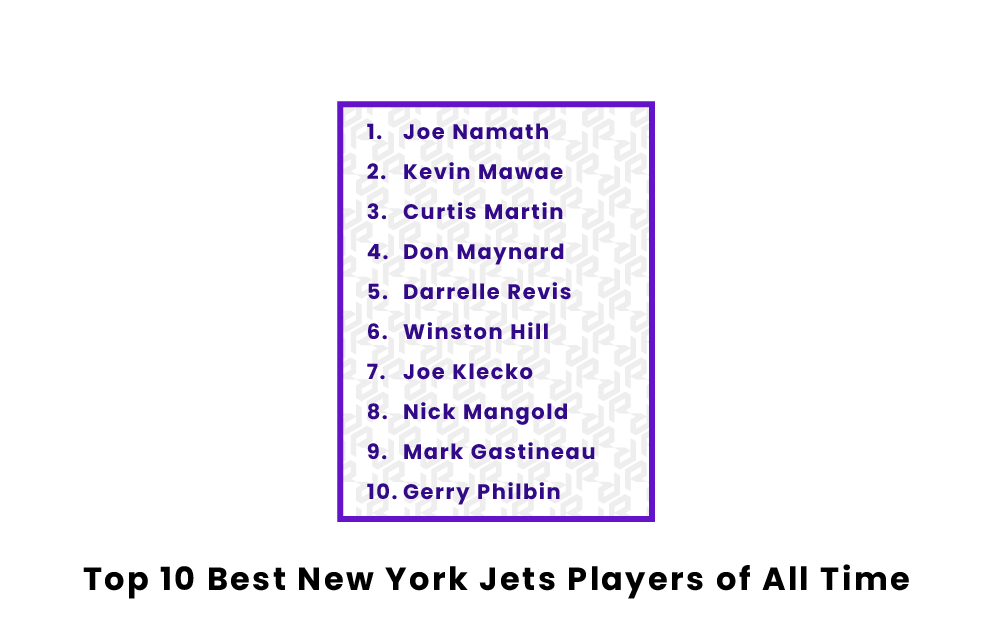 The New York Jets have been around since 1960 when they began playing in the AFL as the New York Titans. Throughout the years, the Jets have had plenty of ups and downs, with their shining moment coming in 1968 when the franchise won its first, and thus far its only, Super Bowl. Read below to learn about the greatest players to ever play for the Jets.

Who are the best New York Jets football players of all time?

“Broadway Joe” is currently the only New York Jets quarterback in the Pro Football Hall of Fame, which he was inducted into in 1985. He is arguably the franchise’s most famous player ever, as he frequently took advantage of the New York spotlight. When he was drafted to New York in the 1965 AFL Draft, it was said that he’d have a shorter career than most due to his injured knees. Namath ended up playing 13 years in the NFL, but he only enjoyed a short prime. Still, from 1965-69 there may not have been a more prolific passer in either the AFL or the NFL. In 1968, Namath led the Jets to Super Bowl III, where they took on the heavily favored Baltimore Colts of the NFL. Before the game, he famously guaranteed the Jets would win, and, lo and behold, New York won 16-7, with Namath committing zero turnovers. This game was arguably the most important in league history as it showed the AFL was just as strong as the NFL.

Kevin Mawae anchored the Jets’ offensive line from 1998-2005, helping New York reach the playoffs in half of those years. Mawae was originally a guard from the Seattle Seahawks but came to the Jets in 1998 and immediately made an impact as a center, where he’d play the rest of his career. In that 1998 season, New York won the division and advanced to the AFC Championship Game before losing to the eventual Super Bowl Champion, Denver Broncos. His greatest impact was on franchise running back Curtis Martin, as the fellow top-10 member ran for 1,000 yards seven times behind Mawae. In fact, in 13 of his 16 seasons, a running back rushed for 1,000 yards. Mawae isn’t just the best offensive lineman in Jets history, he’s one of the greatest linemen in league history, with eight Pro Bowls and seven First/Second Team All-Pro nominations.

When Bill Parcells took over the Jets in 1997, he inherited a 1-15 team that had gotten the number-one pick for the second straight season. Previously, Parcells was the Head Coach of the division rival New England Patriots, and one of their cornerstone players was running back Curtis Martin. Martin reunited with Parcells in New York in the 1998 offseason and was an instant success, as he ran for nearly 1,300 yards and led New York to the AFC Championship Game. Martin became the franchise face of the Jets, becoming a model of consistency for all NFL running backs at the time. Before his final year in the league, Martin had seven consecutive seasons of running for at least 1,000 yards and catching at least 40 passes with the Jets. In that same timeframe, the Pittsburgh native only missed one game. He’s currently the Jets’ all-time leading rusher and sits sixth all-time on the NFL’s career rushing list.

A castoff of the NFL following 1958, Don Maynard quickly became one of the best receivers in the AFL in 1960, with nearly 1,300 receiving yards. He was a lengthy receiver with deep threat speed who also had excellent route running ability. These attributes made him a perfect number one target for Joe Namath in the mid-to-late 1960s. Perhaps his finest game came during the 1968 AFL Championship, where he carved up the Oakland Raiders with six catches for 112 yards and two touchdowns, including the game-winner deep into the fourth quarter. Maynard played on a bad hamstring in the Super Bowl two weeks later, and while he didn’t catch a single pass, he played a pivotal role by serving as a decoy. This allowed New York to open up its run game and propelled them to a championship. Maynard was the first player to ever sign with the Jets and is still the franchise’s best receiver ever.

If Darrelle Revis hadn't played a couple of his prime years with the Tampa Bay Buccaneers and New England Patriots, he’d undoubtedly be higher on this list. The Pittsburgh native owns perhaps the greatest nickname in football history, “Revis Island.” During his heyday in the late 2000s and early 2010s, Head Coach Rex Ryan asked Revis to lock down the opposing team’s number-one receiver, and safety help wasn’t usually given; it was just pure-man-to-man. Revis was so great that he made first-team All-Pro in 2010 without recording a single interception in the regular season or postseason. This was because nobody even dared to throw his way. Out of all his standout performances, the 2010 AFC Wildcard game against the Indianapolis Colts stands above the rest. In that game, Revis was tasked to guard the Colts’ Reggie Wayne. Wayne was a First-team All-Pro that season, but Revis held him to just one catch for one yard.

Lawrence Taylor was the man who made the left tackle famous, but it was still an important position prior to Taylor’s dominance over the league, and Winston Hill is one of the very best ever to ever play it. Hill was drafted by the NFL in 1963 but signed with the Jets instead, and from 1964-75 Hill never missed a start for the Jets, was Joe Namath’s blind side protector, and played a pivotal role in helping New York win the Super Bowl in 1968. In fact, Hill holds the Jets records for consecutive games (195) and starts (174) and made the Pro Bowl playing both tackle positions. Yet, Hill never seemed to get Hall of Fame consideration until 2020, when he made it through the Veterans Committee. Winnie is one of the very best offensive linemen in Jets history and helped protect the face of the franchise in the 1960s.

A valuable member of the famed New York Sack Exchange in the 1980s, Joe Klecko was as versatile as they come. From 1981-85, Klecko made four Pro Bowls, including one at right defensive end, two at left defensive tackle, and another at nose tackle. In total, Klecko finished with 78 sacks, but it likely would’ve been significantly higher had he played defensive end for his whole career. This is because, in four full seasons playing that position, he finished with 46 total, including a career-high 20.5 in 1981. Klecko was the anchor of great Jets defenses who helped turn New York from perennial losers in the post-Namath years to consistent playoff contending teams in the early-to-mid 1980s. Klecko has a solid case to be enshrined in Canton one day via the Veterans Committee, given he’s the only player in league history to make the pro bowl at three different positions. Nevertheless, he was a great Jet and is a member of the team’s Ring of Honor.

In 2006, the Jets drafted two offensive linemen in the first round of the NFL Draft that would anchor the unit for over a decade. The first was left tackle D'Brickashaw Ferguson at fourth overall, and the second was center Nick Mangold at pick 29. Mangold helped the Jets make the playoffs in his rookie season and was New York’s offensive line leader for both the 2009 and 2010 AFC Championship Game teams. In many ways, he was the heart and soul of the offense due to the fact the Jets started many young quarterbacks during his time. The most notable was Mark Sanchez, and Mangold served as a mentor by mostly calling the shots to the offensive line at the line of scrimmage. Nick Mangold first became eligible for the Hall of Fame in 2021 but didn’t make one of the 26 semifinalist spots. Still, he’ll have many more chances to get his name enshrined in Canton.

Alongside Joe Klecko, Mark Gastineau was also a member of the New York Sack Exchange in the early-to-mid 1980s. While Klecko was widely regarded as the versatile player, Gastineau was the pass-rushing specialist. In half of his ten seasons, Gastineau recorded double-digit sacks, including a then NFL record 22 sacks in 1984. He stands atop the Jets’ all-time leading pass rushers with 107.5 career sacks, nearly 30 clear of second place. As great as he was, however, his career-defining moment is one that stands in New York infamy. Late in the fourth quarter of the 1986 AFC Divisional Round against the Cleveland Browns, the pass rushing force hit Cleveland quarterback Bernie Kosar well after he’d released the ball and was promptly called for roughing the passer. This spurred a ten-point rally by the Browns that ultimately led them to win in double overtime, 23-20.

The overall leader of the Super Bowl III Jets squad was Joe Namath. The anchor of the offensive line was Winston Hill, with Don Maynord serving as the primary weapon. Finally, there’s Gerry Philbin: the best defensive player on that team. Philbin was one of the best pass rushers of his day, but his prime was short, which cost him a shot at making the Pro Football Hall of Fame. Still, Philbin recorded double-digit sacks four straight seasons from 1966-69, and was the spark that ultimately led the Jets to a title in 1968. Before that season, Philbin famously challenged quarterback Joe Namath to cut down on turnovers, which would allow New York to maximize its great defense. That year, Namath cut his interceptions from 28 to 17, and the defense gave up 49 fewer points during the regular season for an average of 20 per game. Philbin isn’t usually the first player that comes to mind among the greatest Jets players, but he’s one of the main reasons New York won in 1968.

These 20 players didn’t make the top 10 list above, but they still contributed massively to the Jets’ history as a team and are listed below in alphabetical order by last name.

Who is the best New York Jets quarterback of all time?

The best Jets quarterback of all time is undoubtedly Joe Namath. Namath stands as the Jets’ only quarterback in the Pro Football Hall of Fame that played the majority of his career with the team. Namath is the Jets all-time leading passer, with over 27,000 yards, and his 170 touchdown passes are also the most of anyone in Jets history. However, the finest accomplishment of his career was winning Super Bowl III MVP after guaranteeing the Jets would upset the mighty Baltimore Colts.

Who is the best New York Jets running back of all time?

The Jets have had a pretty rich history of running backs, but the best of them all is 2012 Pro Football Hall of Famer Curtis Martin. Martin was the catalyst of great Jets teams in the late 1990s to early 2000s. During his career in New York, Martin ran for at least 1,000 yards in seven straight years, and is the all-time leading rusher in Jets history.

Who is the best New York Jets wide receiver of all time?

Don Maynard is far and away the greatest Jets wide receiver of all time. Like the running back position, the Jets have had great receivers over the years. However, it’s the first player to ever sign with the Jets, Don Maynard, that’s the best of them all. Maynard is the only Jets receiver with at least 10,000 receiving yards and also holds the team record for receiving touchdowns with 88. He was Joe Namath’s go-to target for many years and helped New York win the Super Bowl in 1968.