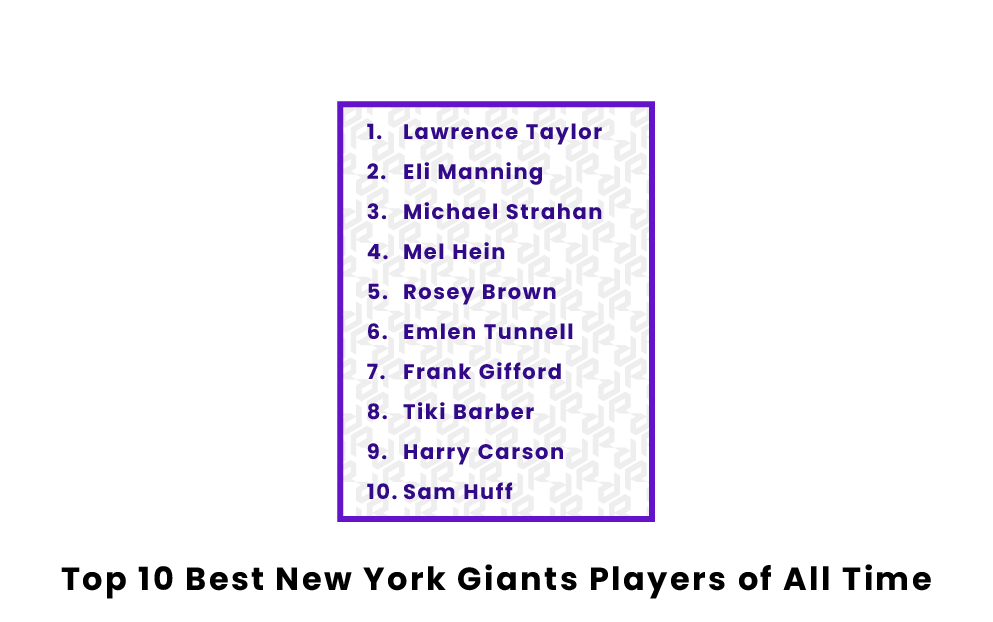 Who are the best New York Giants football players of all time? 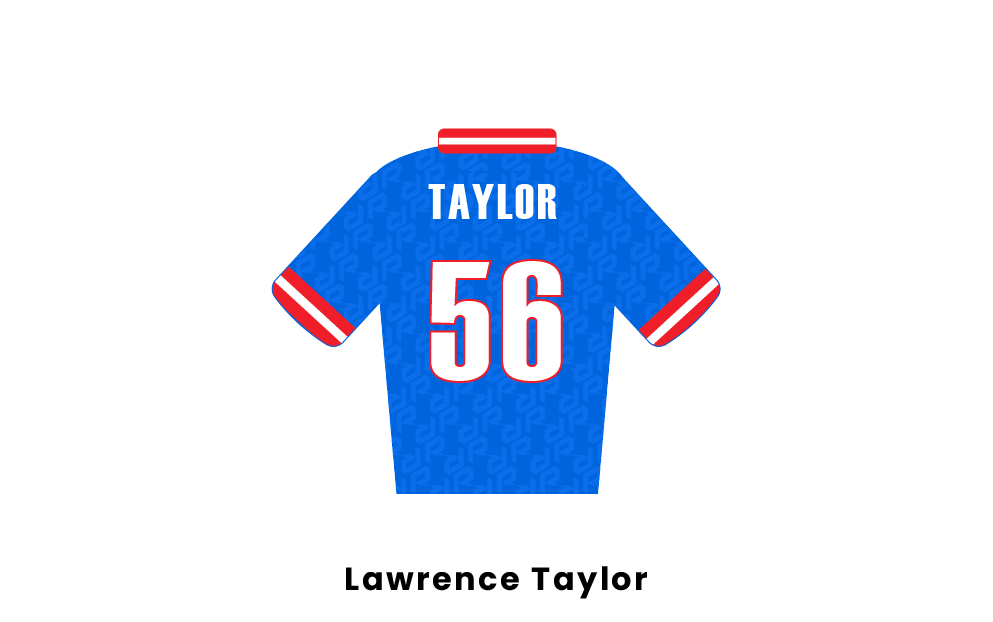 Lawrence Taylor immediately dominated when he was selected second overall in the 1981 NFL Draft by the New York Giants. In Taylor’s rookie season, the linebacker made it to the Pro Bowl, won Defensive Player of the Year, and was Defensive Rookie of the Year with 9.5 sacks. Taylor also won Defensive Player of the Year in 1982, with 7.5 sacks and a defensive touchdown. From there, Taylor was a dominant defensive presence for the next decade. He was an All-Pro and Pro Bowl selection for ten consecutive seasons. This includes an NFL MVP Award in 1986, where he finished the season with 20.5 sacks. Taylor also added his third Defensive Player of the Year Award to his resume, and the Giants went on to win the Super Bowl that season. Taylor was inducted into the Pro Football Hall of Fame in 1999 and is a Giants Ring of Honor member.

Eli Manning was traded to the Giants during the 2004 NFL Draft and started every game from 2005-2016. Manning missed one start in 2017 due to a coaching decision but came back and retired after the 2019 season. Manning is one of the more beloved Giants, having made it to four Pro Bowls in his career and winning the Walter Payton Award in 2016. Giants fans mainly remember Manning’s 2007 and 2011 playoff runs. In 2007, the Giants entered the postseason with a 10-6 record. Manning helped guide the Giants to the Super Bowl, where they took down the then-undefeated New England Patriots in a game that came down to a Manning-led last-minute drive in which the Giants prevailed and defeated the Patriots. The 2011 season was statistically Manning’s best, where he threw for a career-high 4,933 yards and 16 touchdowns. Manning also won that Super Bowl on a last-minute drive against the Patriots. To top it all off, Eli Manning was named Super Bowl MVP after both of those victories.

Michael Strahan was a second-round draft pick for the Giants in 1993, and it took a few seasons for him to become dominant. In a crowded defensive line, Strahan went to his first Pro Bowl in 1997, a year when he had 14 sacks. From there, it was hard for opposing offenses to stop the overpowering Strahan. In five of the next eight seasons, Strahan finished with double-digit sacks. The defensive end was an All-Pro and Pro Bowl selection in all five of those seasons. The breakout campaign for Strahan was 2001, where he won Defensive Player of the Year honors with 22.5 sacks, a number that broke the single-season sack record. Strahan retired after the 2007 season that saw the Giants take down the then-undefeated New England Patriots 17-14 in the Super Bowl. Strahan had two sacks in that playoff run, with two forced fumbles and three tackles for loss.

Hein was a center and a linebacker, as it was quite normal for players to play on both sides of the ball in the early days of football. Nearly ten years after the founding of the New York Giants, Hein helped the team win their first NFL Championship. At a time when there were no facemasks, playing center was a difficult position, but Hein did it for a long time and was a force up front. In Hein’s career, the Giants made it to seven NFL Championships and won two. Hein mainly got his accolades from 1938 to 1941. He was named to the Pro Bowl in each of those four years, while also being named an All-Pro in 1940 and 1941. Additionally, New York maintained a winning record in 11 of Hein’s 15 seasons. Hein was inducted into the Pro Football Hall of Fame in the inaugural 1963 class, and was inducted into the Giants Ring of Honor in 2010.

Rosey Brown was drafted in the 27th round of the 1953 NFL Draft and started immediately. Brown would end up keeping that starting offensive tackle spot for the next 13 years and won tons of accolades. In 1955, Brown was named to his first of nine Pro Bowls. Additionally, that Pro Bowl selection was the first of six consecutive Pro Bowl honors. Brown’s time with the Giants was in the midst of a dynasty era for the franchise, where New York won the NFL Championship in 1956. Brown was named the NFL’s Offensive Lineman of the Year that season. Frank Gifford, the running back for the Giants, said he would not be as successful if it were not for Brown’s talents and efforts. Brown went on to be inducted into the Pro Football Hall of Fame in 1975. The offensive tackle was also a member of the inaugural Giants Ring of Honor class in 2010.

Tunnell signed with the Giants as a free agent in 1948 and was the first African-American football player to play for New York. Tunnell was a key part of the 1956 NFL Championship team and accumulated 74 interceptions in his time in blue for 1,240 yards and four touchdowns. The defensive back made it to his first Pro Bowl in 1950, which marked the first of eight consecutive Pro Bowl selections. Tunnell was also a kick returner for New York, where he accumulated 2,206 career yards on punt returns and 1,125 yards on kick returns. When former Giants coach Vince Lombardi went to the Green Bay Packers, the team also purchased Tunnell’s contract from the Giants after the 1958 season. Tunnell finished his career in Green Bay. The defensive back was inducted into the Pro Football Hall of Fame in 1967 and was made a member of the inaugural Giants Ring of Honor class in 2010.

Tiki Barber was drafted in the second round of the 1997 draft by the Giants but took a little bit of time to get going in New York. Barber was originally selected with the intention of being a situational running back; however, even with 810 scrimmage yards in his rookie season, the halfback finished fourth in Rookie of the Year voting. The 2000 season was where Barber broke out, rushing for 1,006 yards on 213 carries, which would mark his first of six career years of rushing for over 1,000 yards. In 2004, Barber would make the Pro Bowl for the first time in his career after rushing for 1,518 yards on 322 carries. The running back’s best season came the next year in 2005, when he rushed for a career-high 1,860 yards on 357 carries. Barber would retire after the 2006 season to pursue a career in broadcasting.

Harry Carson was selected in the fourth round of the 1976 draft and went on to spend his entire 13-year career with the Giants and was an anchor for that defense. Carson was dominant out of the gate, putting up two sacks and one fumble recovery in eight starts. Those numbers were good enough to be on the NFL All-Rookie Team in 1976. Carson intercepted 11 passes in his NFL career, including six combined in the 1978 and 1979 seasons, and recovered 14 fumbles. Carson’s first of nine Pro Bowls came in 1978. In 1986, the year the Giants won their first Super Bowl, the linebacker had 118 tackles in the regular season and 23 in the playoffs. Carson was a captain for ten seasons and was inducted into the Pro Football Hall of Fame in 2006. The linebacker was also inducted into the Ring of Honor with the inaugural class in 2010.

Sam Huff was selected by the Giants in the third round of the 1956 NFL Draft and spent his first eight seasons in the league in New York. Huff immediately made an impact with three interceptions and two fumble recoveries in his rookie year. Huff finished that season third in Rookie of the Year voting and went on to help the Giants win an NFL Championship in 1956. In Huff’s eight-year tenure with the Giants, New York made the playoffs six times. The linebacker finished his Giants career with 18 interceptions and 11 fumbles. Just before the 1964 season, Huff was traded to Washington, marking the end of his Giants career. The linebacker was inducted into the Pro Football Hall of Fame in 1982 and was named to the Pro Football Hall of Fame All-1950s team. Huff was also a part of the inaugural Giants Ring of Honor class in 2010.

Phil Simms was drafted by the Giants in the first round of the 1979 NFL Draft with the seventh overall selection and finished the 1979 season second in Rookie of the Year voting. Simms was the quarterback of seven playoff teams, finishing his Giants career with 33,462 passing yards and 199 touchdown passes. In 1986, Simms threw 3,487 passing yards and 21 touchdowns and led the Giants to a Super Bowl victory. Simms won Super Bowl MVP in that game as well. In 1990, Simms led the Giants to an 11-3 record before suffering a season-ending injury. Even though Simms was not healthy, the Giants still won the Super Bowl that season. Simms is not in the Pro Football Hall of Fame, but his number 11 was retired by the Giants in 1995. Simms was also inducted into the Giants Ring of Honor in the inaugural class in 2010.

The following players have also played a prominent role in Giants history but didn’t make our top ten list:

Who is the best New York Giants quarterback of all time?

The best Giants quarterback of all time is Eli Manning. The 2004 first overall draft pick spent his entire 16-year career with the Giants and led the squad to two Super Bowl victories (2007 and 2011). Manning won the Super Bowl MVP in both of those contests. The quarterback is also the franchise leader in passing touchdowns with 366 and passing yards with 57,023 yards. Manning was a four-time Pro Bowl selection, and his number 10 is retired by the Giants.

Who is the best New York Giants running back of all time?

While he had an abbreviated career and retired early, Tiki Barber is the best Giants running back of all time. Drafted in 1997, Barber was originally going to be a situational running back, but in 2000 he rushed for over 1,000 yards and eight touchdowns. In five of the next six seasons, Barber rushed for over 1,000 yards, which includes three straight seasons of over 1,500 rushing yards from 2004 to 2006.

Who is the best New York Giants wide receiver of all time?

Amani Toomer is the best Giants wide receiver of all time. Toomer spent his entire 13-year career in New York and was a part of six playoff teams. This includes the 2007 Super Bowl roster. Toomer also had five straight seasons where he put up over 1,000 receiving yards from 1999 to 2003. The 2002 season was a breakout campaign for the receiver, where he had a career-high 1,343 yards and eight touchdowns.