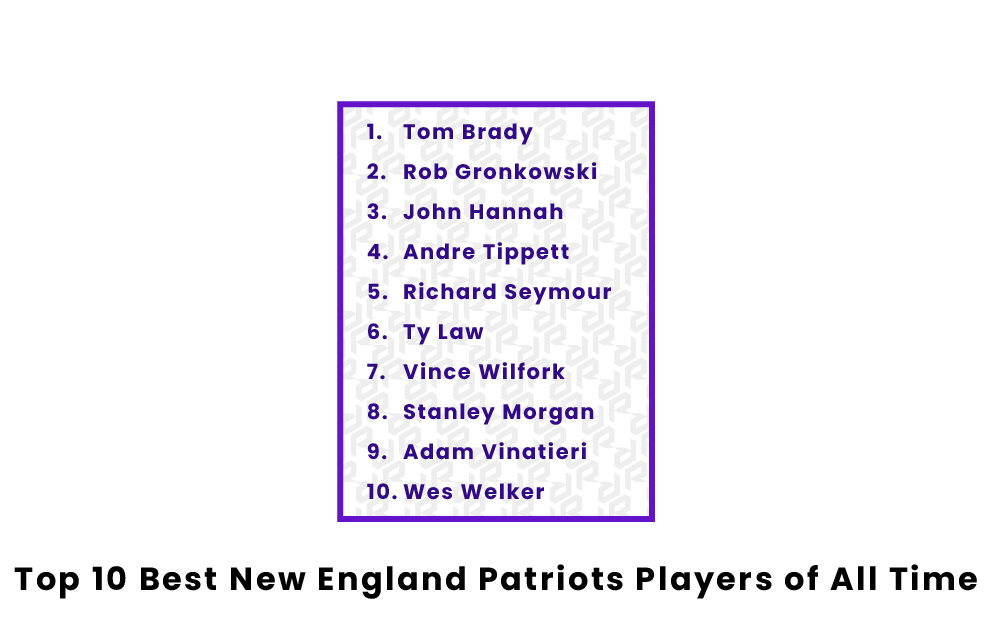 The New England Patriots are not only one of the two most decorated teams in NFL history, but they have also produced some of the best talent this sport has ever seen. From Tom Brady to Richard Seymour, the New England Patriots have been a machine for producing Hall of Famers. Let’s take a look at the ten best Patriots of all time.

Who are the best New England Patriots football players of all time?

With seven Super Bowl rings, five Super Bowl MVPs, and three NFL regular-season MVP awards, Tom Brady is not only the greatest New England Patriot of all time but is also one of the best athletes ever.

After four years at the University of Michigan, Tom Brady was drafted by the Patriots in the sixth round (199th pick) of the 2000 NFL Draft. After a year on the bench, Tom Brady became the starter in the 2001 season after Drew Bledsoe suffered an injury. That season, Brady went on to win his first Super Bowl title against the St Louis Rams, starting a Patriots dynasty that would have seen him win another five rings in New England.

Tom Brady owns every single New England Patriots quarterback record. In twenty seasons in New England, Brady became the quarterback with the most passing yards, completions,  touchdowns, and wins in franchise history. His time with the Patriots has cemented him as the GOAT to many football fans.

As Tom Brady’s favorite weapon, Rob Gronkowski shattered many New England Patriots records, becoming one of the greatest tight ends of all time.

During his tenure with the Patriots, Gronkowski became one of the most loved players by the fans thanks to his stellar play on the field and his friendliness off the field. “Gronk” was selected four times to the First Team All-Pro and five times to the Pro Bowl. Gronkowski also received the NFL Comeback Player of the Year in 2014.

With 183 games started, John Hannah is among the players with the most starts in Patriots history.

John Hannah was a highly regarded prospect coming out of the University of Alabama and was drafted with the fourth pick in the 1972 NFL Draft. Having missed only five games in his whole career, Hannah was known for his resilience and consistent performances. This earned him ten All-Pro selections and nine Pro Bowl call-ups, making him the best offensive lineman in Patriots history.

Having played in the 1970s and 1980s, John Hannah was never part of any Super Bowl-winning New England Patriots team. In thirteen seasons in New England, Hannah only made it to one Super Bowl, the first in franchise history, in the 1985 season. Nonetheless, Hannah was inducted into the Pro Football Hall of Fame and is a member of the NFL 100th Anniversary All-Time Team.

Like Hannah, Andre Tippett played his whole career with the New England Patriots. The two played together for four seasons, dominating each side of the ball, as Tippett is considered the greatest defensive lineman in Patriots history.

Selected 41st in the 1982 NFL Draft, Andre Tippett was a leader on the Patriots’ defense from the beginning of his career. With 100 career sacks, Andre Tippett is among the best outside linebackers in NFL history, even setting the record for most sacks in a two-season span. The Iowa product was selected to the Pro Bowl five times and made it to the All-Pro team four times, earning him the enshrinement to the Pro Football Hall of Fame in 2008.

Tippett’s best season came in 1985 when a 16.5 sacks season earned him the NFL co-Defensive Player of the Year. His dominance on defense helped the team reach the first Super Bowl in franchise history.

Along with Tom Brady and Adam Vinatieri, Richard Seymour was one of the main cornerstones in the first three Super Bowl wins in franchise history.

A star player at the University of Georgia, Seymour was a top ten draft pick in the 2001 NFL Draft. His impact was immediate, as he helped the Patriots reach their first ever Super Bowl win that season, recording 45 tackles and three sacks in his rookie season. Similar to John Hannah, one of the keys to Seymour’s success was his resilience and conditioning, as he only missed six games in his whole career with the New England Patriots.

In his first four seasons as a Patriot, Seymour won three Super Bowl rings and recorded almost 200 tackles, making it to First Team All-Pro twice and being selected to the Pro Bowl three times. The team did not win as much in the second half of his Patriots career, but Seymour still received two All-Pro nods.

Alongside Richard Seymour, Ty Law was one of the star players of a New England Patriots defense that would rarely allow more than 20 points per game.

Despite forgoing his senior year at the University of Michigan, Ty Law was a first-round pick in the 1995 NFL Draft. Law spent ten seasons in New England, winning the first three Super Bowl rings in franchise history and making it to the Pro Bowl four times, while being selected twice to the First Team All-Pro.

A fan idol, Vince Wilfork was one of the key players in a defensive unit that helped the New England Patriots reach four Super Bowls in his ten years there.

As the 21st pick of the 2004 NFL Draft, Vince Wilfork won his first Super Bowl title in his rookie season, a season that saw him record 42 tackles and two sacks despite having to share reps with Keith Traylor. Soon, he became a pillar of a defense that was top ten in points allowed eight times during his time in New England.

Wilfork was selected five times to the Pro Bowl, three times to the Second Team All-Pro, and once to the First Team All-Pro. He is also the only player, other than Tom Brady, to have been with the Patriots for two Super Bowl wins ten years apart from each other.

Many wide receivers have dominated the scene in Foxborough, but only a few have left an impact like Stanley Morgan did. The South Carolina native had an impressive four years at the University of Tennessee before getting selected 25th overall in the 1977 NFL Draft.

Morgan spent almost his whole career in New England, as he played for the Patriots for 13 seasons before signing for the Colts in his final season. As a Patriot, Morgan eclipsed the 1000 receiving yards mark five times and finished with 67 receiving touchdowns, which was the franchise record until Rob Gronkowski broke it in 2017.

Stanley Morgan is the all-time leader in receiving yards in franchise history and still holds the NFL record for the highest career average of yards per catch. He was also a four-time Pro Bowler and was selected Second Team All-Pro twice.

As the NFL franchise with the most Super Bowl appearances, the New England Patriots have had some of the greatest players in their respective positions. While Tom Brady and Rob Gronkowski are considered the greatest quarterback and tight end in NFL history, Adam Vinatieri is among the best placekickers ever.

Adam Vinatieri went undrafted in the 1996 NFL Draft, but after a brief stint for the Amsterdam Admirals, the South Dakota State product made the Patriots roster in 1996. After losing the Super Bowl in his rookie season, Vinatieri won three rings with the Patriots from 2001 to 2004. Vinatieri played a crucial role in the first two Super Bowl wins in franchise history, hitting the winning field goal in both games.

“Iceman” is the all-time leader in points scored in NFL history, led the league in scoring in 2004, and was a two-time First Team All-Pro and two-time Pro Bowler with the Patriots.

In five seasons in New England, the Oklahoma native Wes Welker became one of Tom Brady’s most lethal weapons for 37 touchdowns.

Similar to Vinatieri, Welker, who was not selected in the 2004 NFL Draft, is among the greatest undrafted players of all time. After a short time with the Chargers, Welker played three seasons for the Dolphins before New England traded for him in 2007. Welker did not win a Super Bowl ring in Foxborough but was a five-time Pro Bowler and a two-time First Team All-Pro.

Who is the best New England Patriots quarterback of all time?

Tom Brady is the greatest quarterback New England Patriots quarterback of all time. He holds the franchise record for passing yards, attempts, completions, passing touchdowns, games played, and wins. Tom Brady left the Patriots in 2020 after winning six rings in nine Super Bowl appearances, five Super Bowl MVPs, three regular season MVPs, and being selected to the First Team All-Pro three times. His accuracy, decision-making, and winning mentality have led Tom Brady to become not only the greatest Patriots quarterback of all time, but also the best in NFL history.

Who is the best New England Patriots running back of all time?

Running backs have always played a secondary role in the Patriots’ offense, especially during the Tom Brady era. However, running backs like Kevin Faulk, Jim Nance, and Curtis Martin dominated the scene in their stints in New England. Among them, Curtis Martin is considered the greatest running back in New England Patriots history. In only three seasons in New England, Martin recorded more than 4,000 all-purpose yards while winning the NFL Offensive Rookie of the Year.

Who is the best New England Patriots wide receiver of all time?