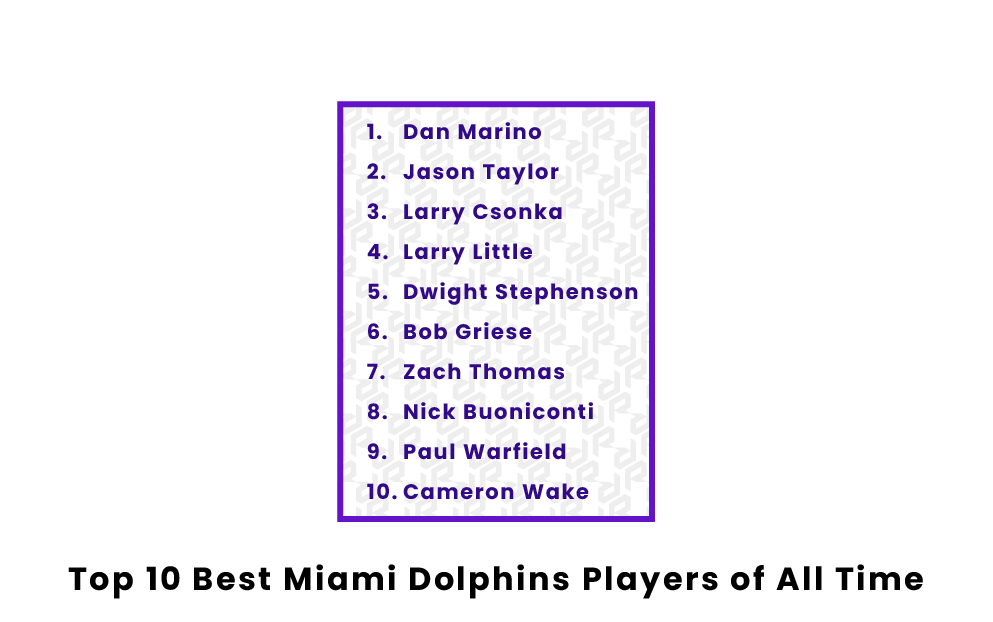 The Dolphins are rich in history and have had many talented players that have contributed to great success. Miami has two Super Bowl titles attached to its name, one which was preceded by a perfect season in 1972. The Dolphins have 17 Hall of Famers in the Pro Hall of Fame and many of the players on this list contribute to that mark.

Who are the best Miami Dolphins football players of all time?

Dan Marino was taken by the Dolphins with the 27th overall pick in the 1983 NFL Draft. In his rookie season, the quarterback took over the starting role by week six and dominated over the course of his 17-year career. Marino finished second in Rookie of the Year voting, but the following year in 1984, won MVP and Offensive Player of the Year. Marino threw for a career-high 5,084 yards, and 48 touchdowns, and both of those marks led the NFL that season. The quarterback went on to be selected to nine Pro Bowls and six different All-Pro teams. Marino finished his career with a franchise record of 61,361 passing yards and 420 touchdowns. Marino sits at seventh all time in passing yards with that number. The quarterback never won a Super Bowl in Miami but was inducted into the Pro Football Hall of Fame in 2005 and is on the NFL’s 100th Anniversary All-Time Team.

Jason Taylor was selected in the third round of the 1997 NFL Draft by the Dolphins and had five sacks in his rookie season. That number, along with 42 tackles and two forced fumbles, was good enough for fourth in Defensive Rookie of the Year voting. Taylor truly broke out in 2000, when he put up his first double-digit sack season with 14.5 and scored a defensive touchdown, which were numbers that earned him his first Pro Bowl honor and All-Pro selection. In 2002, Taylor had a career-high 18.5 sacks, which was good enough for second in Defensive Player of the Year voting. The year Taylor earned the Defensive Player of the Year Award was in 2006, when the defensive end accumulated 13.5 sacks and forced nine fumbles. Taylor finished his career as the franchise’s leader in sacks, forced fumbles, tackles for loss, and fumble recoveries. The defensive end was inducted into the Pro Football Hall of Fame in 2017.

Larry Csonka was the eighth overall pick in the 1968 NFL Draft and helped the Dolphins be a standout rushing team in the early 1970s. Csonka was a big body and lined up anywhere in the backfield. In the 1970 season, Csonka rushed for 874 yards and six touchdowns, which helped him earn his first Pro Bowl selection. The running back would go on to make the Pro Bowl in each of the following four seasons. Csonka’s best season statistically came in 1972, when the halfback had 213 carries for a career-high 1,117 yards and seven rushing touchdowns. Csonka finished that season third in MVP voting and second in Offensive Player of the Year voting. Csonka played eight of his 11 seasons in Miami and finished his career as the franchise leader in rushing yards and rushing touchdowns. The running back was inducted into the Pro Football Hall of Fame in 1987.

Larry Little was traded to the Dolphins from the San Diego Chargers just before the 1969 season and immediately dominated. He started in 10 of the 12 games and made his first Pro Bowl in 1969. Lining up at right guard for a majority of his career, Little helped the Dolphins rushing game flourish. In 1972, the Dolphins rushed for 2,960 yards, a record at the time, and Little played a considerable role in that number. The offensive lineman was so dominant upfront that he made the Pro Bowl five times and was named to five consecutive All-Pro teams. In 1972, Little finished eighth in MVP voting and seventh in Offensive Player of the Year voting. Little was inducted into the Pro Football Hall of Fame in 1993 and was selected for the 1970s All-Decade Team. The offensive lineman is also a Miami Dolphins “Honor Roll” selection.

Dwight Stephenson started his NFL career primarily as a special teams player after being drafted by the Miami Dolphins in the second round of the NFL Draft. During the 1982 season, Stephenson began to get starting reps at center and did not look back. For the six straight seasons that Stephenson led the offensive line, the Dolphins allowed the least sacks to an opposing defense. The Stephenson-led offensive line helped then-quarterback Dan Marino achieve a record for most consecutive pass attempts without being sacked. From 1983 to 1987, Stephenson made it to five successive All-Pro teams and had five straight Pro Bowl selections. Stephenson suffered a career-ending knee injury after starting nine games in 1987 and retired. Stephenson was inducted into the Pro Football Hall of Fame in 1998. That was not the only recognition that Stephenson earned after his career. The offensive lineman was named to the Pro Football Hall of Fame’s 1980s All-Decade Team and was named to the NFL’s 100th Anniversary All-Time Team.

Bob Griese was the fourth overall pick in the 1967 NFL Draft and showcased his football talent in his rookie season. The quarterback started 10 games and threw for 2,005 yards and 15 touchdowns. Griese made the Pro Bowl that season while finishing second in the Offensive Rookie of the Year voting. Griese went on to be named to seven more Pro Bowls and earned two All-Pro selections in 1971 and 1977. In 1972 and 1973, Griese helped the Dolphins win two straight Super Bowls. Griese’s best season statistically was 1977, where he threw for a career-high 2,252 yards and 22 touchdowns. The quarterback finished second in MVP voting and second in Offensive Player of the Year voting. Griese was named to the Pro Football Hall of Fame in 1990 and had his number, 12, retired by the Dolphins. The former signal caller is also a Miami Dolphins “Honor Roll” selection.

Zach Thomas was a fifth-round selection in the 1996 NFL Draft and showed off his toughness in his rookie season. In 1996, Thomas had three interceptions, 154 total tackles, and two forced fumbles. Those numbers were good enough to finish second in Defensive Rookie of the Year voting, and be named to the 1996 All-Rookie Team. Thomas would go on to have a long career as the middle linebacker and leader of the defense in Miami. From 1998 to 2003, the middle linebacker was an All-Pro selection and was named to the Pro Bowl in each season from 1993 to 1998. Thomas statistically had his best season in 2006, when the linebacker tied his career high in sacks with three and had a career-best 165 combined tackles. Thomas finished his career as the franchise leader in solo tackles with 1,042 and was selected to the 2000s All-Decade Team.

Nick Buoniconti spent the first seven years of his career with the Patriots before being traded to the Dolphins before the 1969 season. Buoniconti was an All-Pro selection and a Pro Bowl selection in his first season in Miami with three interceptions, two sacks, and a fumble recovery. The middle linebacker was also named the Dolphins MVP in 1970. In the 1973 season, Buoniconti had 165 sacks, a record at the time. Tackles were not a recorded statistic until the 1990s, but the linebacker had eight interceptions in 92 games for the Dolphins. Buoniconti was the leader of the defense for both of the Dolphins’ Super Bowl victories in 1972 and 1973. The middle linebacker was inducted into the Pro Football Hall of Fame in 2001 and was named to the Pro Football Hall of Fame 1960s All-Decade Team. Buoniconti is also a Miami Dolphins “Honor Roll” selection.

Paul Warfield only spent five seasons in Miami, as he spent a majority of his career playing for the Cleveland Browns, but was still dominant in his time in the Sunshine State. The receiver was a Pro Bowl selection in every season he was a Dolphin; he also was an All-Pro honoree in 1971, 1972, and 1973. Warfield was a part of both the 1972 and 1973 Super Bowl teams. The wide receiver’s best year in Miami statistically was 1971, when Warfield had 43 receptions for 996 yards and 11 touchdowns. In his five years with the Dolphins, Warfield racked up 156 receptions, 3,355 yards, and 33 touchdowns in 60 games. The wide receiver was inducted into the Pro Football Hall of Fame in 1983 and is a member of the NFL 100 All-Time Team. Warfield is also on the 1970s All-Decade team and is a Miami Dolphins “Honor Roll” selection.

Who is the best Miami Dolphins quarterback of all time?

The best Miami Dolphins quarterback of all time is Dan Marino. The quarterback was taken in the first round of the 1983 NFL Draft and became the starter six weeks into his rookie season. Marino finished his career with 61,361 passing yards, which leads franchise history. He also is the franchise leader in completions and passing touchdowns. Marino was the NFL MVP in 1984 and was inducted into the Pro Football Hall of Fame in 2005.

Who is the best Miami Dolphins running back of all time?

Larry Csonka is the best Miami Dolphins running back of all time. Csonka was drafted in the first round of the 1968 NFL Draft and shined with a truck style of running. The halfback is the franchise leader in rushing yards with 6,737 and rushing touchdowns with 53. Csonka is a two-time All-Pro selection who made it to the Pro Bowl from 1970-1974. The running back was inducted into the Pro Football Hall of Fame in 1987.

Who is the best Miami Dolphins wide receiver of all time?

Paul Warfield is the best Miami Dolphins wide receiver of all time. Warfield only spent five seasons in Miami but was a star throughout his tenure. The receiver put up 3,355 receiving yards and 33 touchdowns on 156 receptions during his time as a Dolphin. In 1971, Warfield had an exceptional 996 receiving yards and 11 touchdowns. The wide receiver was a Pro Bowl selection in every season he played for the Dolphins and was inducted into the Pro Football Hall of Fame in 1983.