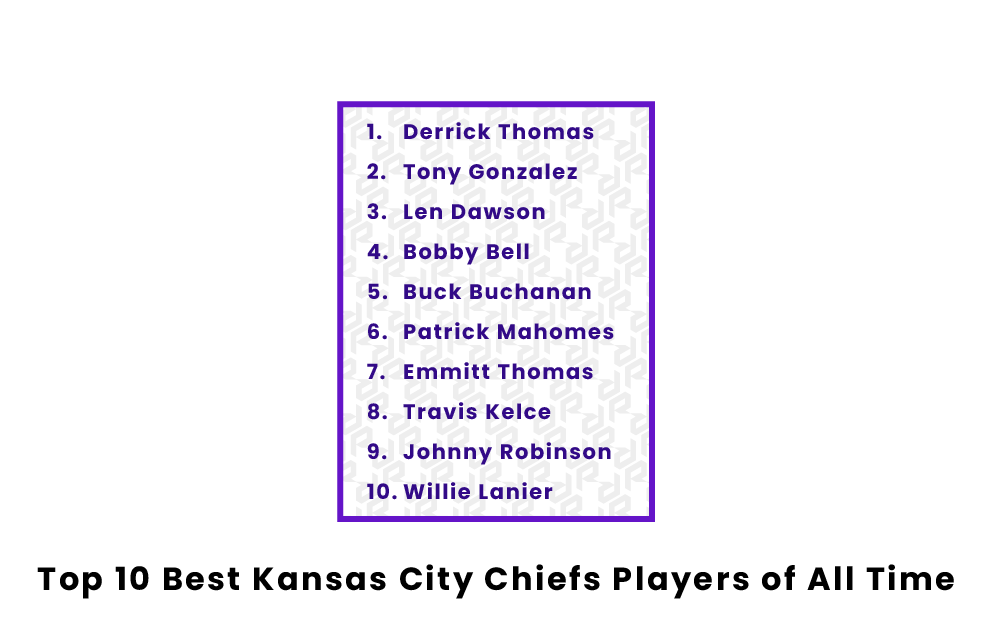 The Kansas City Chiefs are a National Football League (NFL) team that has been a member of the NFL since 1970. They were originally in the now defunct AFL from 1960-1970 before the two leagues merged. In their history, the Chiefs have won two Super Bowls (1970 and 2020), and they have had some outstanding players. The ten best players in franchise history are discussed and ranked below. It should be noted that any statistics and accolades mentioned encompass only a player’s time in Kansas City, not their whole career.

Who are the best Kansas City Chiefs football players of all time?

A player whose life was taken far too soon, the best player in Kansas City Chiefs history is Derrick Thomas. Thomas was a linebacker who played for the Chiefs from 1989-1999. In his first season, Thomas won the AP NFL Defensive Rookie of the Year Award, and he would go on to make nine Pro Bowls and five All-Pro teams in his eleven seasons. On the Chiefs’ all-time list, Thomas ranks first in fumbles forced with 41, first in fumble recoveries with 19, first in fumbles returned for touchdowns with four, first in sacks with 126.5, and third in tackles with 599. Thomas would likely have even better career numbers; however, as mentioned above, his life was taken far too early. On January 23rd, 2000, Thomas was involved in a car accident that paralyzed him from the waist down. A couple of weeks later, his resulting injuries caused him to suffer cardio-respiratory arrest, and he passed away at just 32 years old. In recognition of his outstanding career, Derrick was posthumously inducted into the Pro Football Hall of Fame in 2009.

One of the greatest tight ends in NFL history, Tony Gonzalez comes in at number two on the list. Gonzalez played tight end for the Chiefs from 1997-2008, and in those twelve seasons, he made ten Pro Bowls and was selected to nine All-Pro teams. In 2004, Gonzales led the NFL in receptions for the season with 102. On the Chiefs’ all-time receiving lists, Tony ranks first in receptions (916), targets (1,409), receiving touchdowns (76), and receiving yards (10,940), as well as sixth in yards per game (57.6). In recognition of his great play during the 2000s, Gonzales was selected to the Pro Football Hall of Fame all-2000s decade team. Tony would go on to play five solid years for the Atlanta Falcons after leaving Kansas City, and it should come as no surprise then that after his career was over, he was voted into the Pro Football Hall of Fame in 2019.

The first member of the Chiefs 1970 Super Bowl championship team and the first quarterback, Len Dawson is the number three ranked player in Chiefs history. A quarterback for the Chiefs from 1962-1975, he is the Chiefs’ all-time leader in passing completions with 2,175, passing touchdowns with 237, passing yards with 28,507, and game-winning drives led with 16. Moreover, Dawson led the AFL in touchdown passes four times (1962, 1963, 1965, 1966). In the biggest game of his Chiefs career, Len was outstanding in Super Bowl IV and won the Super Bowl MVP award after he completed twelve of his seventeen passes for 142 yards and one touchdown in the Chiefs’ 23-7 victory over the Minnesota Vikings. Overall in that postseason, Len had 472 yards, two touchdowns, and completed 31 of his 61 pass attempts in the three postseason games. After his outstanding career, Dawson was inducted into the Pro Football Hall of Fame in 1987.

Another member of the Chiefs 1970 Super Bowl championship team, Bobby Bell is the number four ranked player in Chiefs history. Bell was a linebacker/defensive end who was on the Chiefs in their AFL days, playing with them from 1963-1974. On the Chiefs’ all-time defensive lists, Bobby has the most interceptions returned for touchdowns with 6, the second most fumbles returned for touchdowns with 2, the tenth most interceptions with 26, and the thirteenth most sacks with 40. Bell would likely be high up on the Chiefs’ all-time tackles list, however tackles did not become an official tracked NFL stat in 1994. During the Chiefs’ Super Bowl run in 1970, Bell had one sack in the three postseason games. Throughout his twelve-year stint with the team, Bobby made nine Pro Bowls and was voted onto seven All-Pro teams. In 1983, Bell was honored by being inducted into the Pro Football Hall of Fame.

The third straight Super Bowl IV Champion, Buck Buchanan is this list's number five ranked player. Buchanan played defensive end for the Chiefs, with whom he spent his entire career from 1963-1975. During those thirteen years, Buck was selected to eight Pro Bowls and was voted onto six All-Pro teams. In the three postseason games that led to the Chiefs’ Super Bowl IV victory in 1970, Buchanan contributed 1.5 sacks, one of which was in the Super Bowl. As for his all-time Kansas City defensive ranks, Buchanan has the sixth most sacks in Chiefs franchise history with 70.5, and he would likely be up there on their all-time tackles lists, however as was mentioned above for Bobby Bell, tackles were not an official statistic when Buck played in the 1960s and 70s. Like every player prior, Buchanan’s great career was recognized with a Pro Football Hall of Fame induction in 1990.

The first of two active players and the first of two members from the Chiefs Super Bowl LIV championship team in 2020, Patrick Mahomes comes in at number six on the list. Mahomes is a quarterback who has played for the Chiefs since 2017. Mahomes has the highest average passing yards per game in franchise history (301.4), and even though he has only played five NFL seasons, he already has the third-most passing yards (18,991), the second-most touchdowns (151), fourth-most game-winning drives (10), and the fourth-most passing completions (1,550). In his five seasons, Mahomes has made the Pro Bowl four times, and in 2018 he made the All-Pro team while winning the NFL MVP award. During the postseason in 2020, when the Chiefs eventually won the Super Bowl, Mahomes passed for 901 yards, threw ten touchdowns, and completed 72 of his 112 pass attempts. If Mahomes’ career continues on this trajectory, he will certainly move up this list by the time his football playing days are over.

The first secondary member of the list and yet another Super Bowl IV champion, Emmitt Thomas is ranked number seven on the list. Thomas played cornerback for Kansas City from 1966-1978 and made five Pro Bowls as well as two All-Pro teams during that time. In the 1970 playoffs, Thomas played a key role in the Chiefs’ run to the Super Bowl, intercepting four passes in the three postseason games, one of which came in the championship game. Speaking of interceptions, Thomas is the Chiefs’ all-time leader in interceptions with 58, and he twice led the league in that category in 1969 with 9 and in 1974 with 12. Thomas also has the most interception return yardage with 931 yards and the second most interceptions returned for touchdowns with five. Years after the conclusion of his career in 1978, Emmitt was selected to the Pro Football Hall of Fame in 2008.

A teammate of Patrick Mahomes on the Super Bowl LIV championship team and the second active member, Travis Kelce is number eight ranked player in Chiefs history. Like Tony Gonzales, Kelce is a tight end who has played with Kansas City since 2013. In his nine seasons played, Kelce has made six All-Pro Teams, seven Pro Bowls, and his play last decade earned him a spot on the Pro Football Hall of Fame 2010s All-Decade Team. Like Mahomes, Kelce has a chance to move higher up on this list as his career progresses, but for now, he already ranks second behind Gonzales in receptions with 704, receiving yards with 9,006, receiving touchdowns with 57, targets with 994, and is also second behind Tyreek Hill in receiving yards per game played with 70.9. Lastly, during the 2020 run to the Super Bowl, while catching passes from Mahomes, Kelce caught nineteen passes for 206 yards and four touchdowns in the Chiefs’ three playoff games.

One of the veteran leaders on the 1970 Super Bowl team, Johnny Robinson ranks number nine on the list. Robinson was with the Chiefs from the beginning and played all twelve of his seasons from 1960-1971 with the team. His first two years, he played running back before switching over to safety for the remainder of his career. It was in his ten seasons as a safety that Johnny made six All-Pro teams and seven Pro Bowls, as well as helped the Chiefs to the Super Bowl in 1970. In those 1970 playoffs, Robinson had one interception and one fumble recovery. On the Chiefs’ all-time lists, Robinson is second in career interceptions behind the aforementioned Emmitt Thomas with 57 and second behind Thomas in interception return yardage with 741 yards. Like his fellow 1970 champions, Robinson was inducted into the Pro Football Hall of Fame, getting the honor in 2019, almost 50 years after retirement.

The final member of this list and the sixth member of the 1970 team is Willie Lanier. Lanier was a linebacker who played his entire career for Kansas City from 1967-1977. During the 1970 Super Bowl run, Lanier was a key leader of the defense and had one interception during the three playoff games. Overall, Willie made eight Pro Bowls and was selected to four All-Pro teams in his eleven seasons played in Kansas City. As for his all-time numbers, Lanier has the second most fumble recoveries in team history (18) and the ninth most interceptions (27). Like some of his aforementioned teammates, Lanier would be one of the top tacklers in team history, but tackles were not officially tracked when he played. As is the case with all of his fellow Super Bowl IV champions on this list, Willie is a member of the Pro Football Hall of Fame, earning that honor in 1986.

While the twenty players listed below did not quite make the top ten, they still deserve some recognition as honorable mentions. They are listed in alphabetical order by last name.

Who is the best Kansas City Chiefs quarterback of all time?

Currently, the best Kansas City Chiefs quarterback of all time has to be Len Dawson. As was mentioned above, Dawson is the Chiefs’ all-time leader in passing yards, passing touchdowns, passing completions, and game-winning drives. If Patrick Mahomes continues at the pace that he has set for himself in the first portion of his career, however, the answer to this question will most likely be him by the time his playing days are over.

Who is the best Kansas City Chiefs running back of all time?

While he did not quite make the top ten players list, the best Kansas City Chiefs running back of all time is Jamaal Charles. Charles played running back for Kansas City from 2008-2016, and he is Kansas City’s all-time leader in rushing yards with 7,260, fourth in rushing touchdowns with 43, and second in rushing attempts with 1,332. Priest Holmes (2001-2007) certainly has a case too, with his 76 rushing touchdowns, but Charles’ longer Chief career and over 1,200 more yards give him the edge.

Who is the best Kansas City Chiefs wide receiver of all time?

Another player who just missed the top ten, the best Chiefs wide receiver of all time, was Otis Taylor, Len Dawson’s favorite target during the 1960s and 70s. Taylor ranks third in Chiefs history behind the aforementioned Tony Gonzales and Travis Kelce in receiving yards with 7,306, ranks sixth in receptions with 410, and is tied with Kelce for second all-time with 57 touchdowns. Taylor also has the fourth highest yards per reception (17.8) in team history out of players who had at least 1,000 career receiving yards for Kansas City.