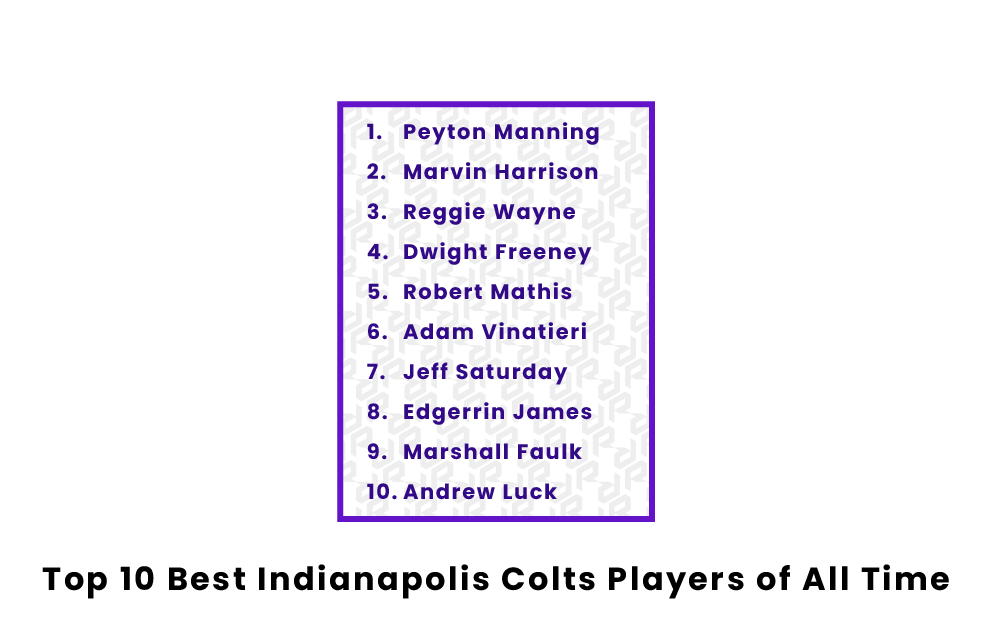 The Indianapolis Colts were created and officially recognized by the NFL in 1953 and, since then, have become one of the most respected and prestigious franchises in the entire NFL. The team has had numerous talented players take the field for them, and this list will highlight some of those players.

Who are the best Indianapolis Colts football players of all time?

Peyton Manning is not only a legend for the Indianapolis Colts but the entirety of the NFL. Manning spent 12 seasons with the Colts before the team released him, and afterward, he signed with the Denver Broncos. After Peyton left the University of Tennessee and became a pro, dominance followed him wherever he went. Throughout his illustrious career, Manning accumulated numerous accolades and set various records, such as having the most 4,000-yard passing seasons, single-season passing yards, and single-season passing touchdowns.

Manning's impressive resume during his tenure with the Colts includes an astounding four NFL MVPs, 11 Pro Bowl nominations, and 5 All-Pro selections. His crowning achievement for his time with the Colts has to be the Super Bowl championship he delivered to them during the 2007 Season. Manning's impressive career was recognized when he was announced and enshrined in the Hall of Fame as a member of the 2021 class.

After being selected 19th overall in the 1996 NFL Draft, Marvin Harrison went on to have an incredibly successful career as a wide receiver for the Indianapolis Colts. Marvin Harrison played 190 games over his career and collected an impressive number of accolades to his resume; winning a Super Bowl with the Colts in 2007, six-time NFL All-Pro selection, eight-time NFL Pro-Bowl Selection, and eventually being named to the NFL All-2000s Hall of Fame Team.

During his time as a receiver for Peyton Manning, the two had an NFL record 112 touchdown passes thrown from quarterback to wide receiver. When Marvin Harrison decided to retire, he ended his career with 13 seasons as an Indianapolis Colt; 1,102 career receptions, 14,580 receiving yards, and 128 receiving touchdowns. Eventually, he was enshrined into the Pro Football Hall of Fame as a member of the 2016 class.

Reggie Wayne was the second option to Marvin Harrison in the Colt's offense following his selection by the team in the 2001 NFL Draft. However, he went on to become one of the team's best players. Wayne earned his first Pro Bowl in 2006, finishing the season with 86 catches for 1,310 yards and nine scores; he followed this success by going on to five consecutive Pro Bowls in the following seasons.

Wayne was part of the Indianapolis Colts team that won the 2007 Super Bowl, where he played a significant role by catching the sole touchdown pass thrown from the Colts that game. Wayne retired from the NFL following the 2014 season. While not a Hall of Famer yet, he has a career resume that includes a final stat line of 968 receptions for 13,063 yards and 78 touchdowns, his chances of being enshrined eventually remain high.

One of the greatest defenders in Indianapolis Colts history, Dwight Freeney, undoubtedly deserves to belong on this list of Colt greats. Dwight Freeney has been a force to be reckoned with since his time in college, where he played for Syracuse. Before being drafted 11th overall in the 2002 NFL Draft by the Colts, he earned All-American Honors during the 2001 collegiate season.

Once Freeney entered the league, he started to live up to his hype, earning seven Pro-Bowls nominations, three All-Pro selections, the 2005 AFC Defensive Player of the Year, and winning a Super Bowl in 2007 with the team. Freeney left the team after a 10-year tenure with the Colts and went on to play for numerous teams, including the San Diego Chargers, Arizona Cardinals, Atlanta Falcons, Seattle Seahawks, and Detroit Lions, before retiring in 2018.

While maybe not as flashy as Marvin Harrison, Robert Mathis was one of the key cogs to the 2000s Colts defense and was equally integral to the team's success during his tenure. Mathis was drafted in the 5th round, 138th overall, in the 2003 NFL Draft and spent 13 years on the team that drafted him, the Indianapolis Colts. During the 13 years Mathis spent with the Colts, he accumulated five-time Pro-Bowl selections, an All-Pro Selection in 2013, and was an integral part of the defense on the 2007 Colts Super Bowl team.

One of the most consistent and respected defenders in the NFL, his inclusion on this list of Colts greats is obvious. Mathis ended his career with a final stat-line of 538 tackles, 123 sacks, 54 forced fumbles, 17 fumble recoveries, three touchdowns as a defender, and even an Interception before his eventual retirement following the 2016 NFL Season.

Adam Vinatieri is widely believed to be one of the greatest to ever kick for not only the Indianapolis Colts but the entirety of the NFL. This idea may come from the nicknames the star kicker has had over his career, which included "Mr. Clutch,” “Automatic Adam,” and “Iceman"; but regardless it is undisputed that Vinatieri is one of the best Colts ever to take the field for the team. After going undrafted and becoming a free agent, Vinatieri started his career with the New England Patriots, and after winning three Super Bowls with them, left to join the Colts.

During his time with the Colts, Vinatieri posted an impressive 85.3% FG rate on 336 attempts and had a 96.8% made extra-point percentage. Adam also holds the record for being the first-ever kicker to win four Super Bowls and making the game-winning kick in two of them (SB XXVI and SB XXXVIII).

Jeff Saturday was an NFL center for the Indianapolis Colts from the 1999 season and went on to play 13 seasons for the team before joining the Packers in 2012. Saturday was a part of the often-overlooked offensive line that was immensely important to the continued success that the Colts saw during his tenure. Considering that Saturday was an undrafted free agent and then cut by the Baltimore Ravens before even playing in a single NFL game, his resume is incredible.

His resume includes being part of the 2007 Super Bowl Championship team, earning six NFL Pro Bowl selections (five with the Colts), two NFL All-Pro Selections, and being named to the All-Decade Team for the 2000s. One of the other career achievement highlights that Saturday earned was the 2007 NFL Alumni Offensive Lineman Of The Year award, which further cemented the respect and status he held among his peers for his talent and skills.

Edgerrin James was not only highly successful, he was also one of the greatest running backs to have ever started for the Indianapolis Colts. In fact, his tenure with the team lasted from the 1999 season to the 2005 season and was spent solidifying himself as one of the great players in Indianapolis Colts team history. Following his successful collegiate career with the University of Miami, he was drafted 4th overall by the Colts during the first round of the 1999 NFL Draft.

James immediately paid dividends for the team, earning NFL Offensive Rookie of the Year honors following his rookie season that saw him rush 369 times for 1553 yards and 13 touchdowns. James' impressive career resume ended with four total Pro Bowl selections, a 1999 All-Pro selection, 12,246 career yards, and 80 touchdowns. His career efforts were recognized in 2020 when he was enshrined in the Pro Football Hall of Fame.

One of the best running backs of his time, Marshall Faulk may have only spent four full seasons with the Indianapolis Colts, but his tenure was still impactful enough to justify his inclusion on this list. After being drafted 2nd overall by the Colts in the 1994 NFL Draft, Faulk went on to have a fruitful career with the Colts until the 1999 season.

Faulks's talent was undeniable, supported by the fact he was one of only three NFL players to reach 10,000 rushing yards and 5,000 receiving yards; he is the only player ever to amass 12,000 yards rushing and 6,000 yards receiving throughout his career. Faulk ended his Hall of Fame career with a jaw-dropping resume that includes: NFL MVP, Super Bowl Champion, seven pro-bowl selections, and three All-Pro selections. While his resume may look better than Edgerrin James, his short tenure with the team bumps him down to second-best running back in franchise history.

Andrew Luck was quite the polarizing player for the Indianapolis Colts, being the starting quarterback for the team from 2012-2018. After a year that saw the Colts go 2-14 during the 2011 season, the fans rallied behind the "Suck for Luck" chant throughout the season. In the draft, the Colts would follow through and select Luck #1 overall after his incredibly successful career at Stanford, which saw him win the Maxwell, Walter Camp, and Johnny Unitas Golden Arm Award his senior season.

Once in the NFL, Luck immediately contributed, posting a rookie stat line of 4,374 yards and 23 touchdowns, coming in second in the Rookie of the Year race. Luck continued this success and saw his best season in 2014 when he threw a stunning 4,734 yards and 40 touchdowns. Luck was injured through most of his tenure with the team and eventually chose to retire before the start of the 2019 NFL season.

Who is the best Indianapolis Colts quarterback of all time?

Peyton Manning is the best quarterback the Indianapolis Colts have ever had. Not only did he deliver them a championship in 2007, but he also was a four-time MVP while he was with the team as well. Manning's 12-year stint with the team is where he spent the majority of his prime and earned numerous accolades such as 11 Pro Bowl and five All-Pro selections. He even set the records for single-season passing yards and single-season passing touchdowns.

Who is the best Indianapolis Colts running back of all time?

Edgerrin James was the greatest running back ever to have started for the Indianapolis Colts. After the Colts drafted him during the first round of the 1999 NFL Draft, he immediately found success among the pros, earning NFL Offensive Rookie of the Year honors. James' impressive career resume ended with four total Pro Bowl selections, an All-Pro selection, and eventual enshrinement into the Pro Football Hall of Fame as part of the 2020 inductee class.

Who is the best Indianapolis Colts wide receiver of all time?

Marvin Harrison went on to have an incredibly successful career as a wide receiver for the Indianapolis Colts and was the best wide receiver to play for the franchise. He won a Super Bowl with the team in 2007, was a six-time NFL All-Pro selection, eight-time NFL Pro Bowl selection, and equally impressively, he had 1,102 receptions, 14,580 receiving yards, and 128 receiving touchdowns in his career. Harrison also made the Pro Football Hall of Fame in 2016, further solidifying his greatness as a wide receiver.