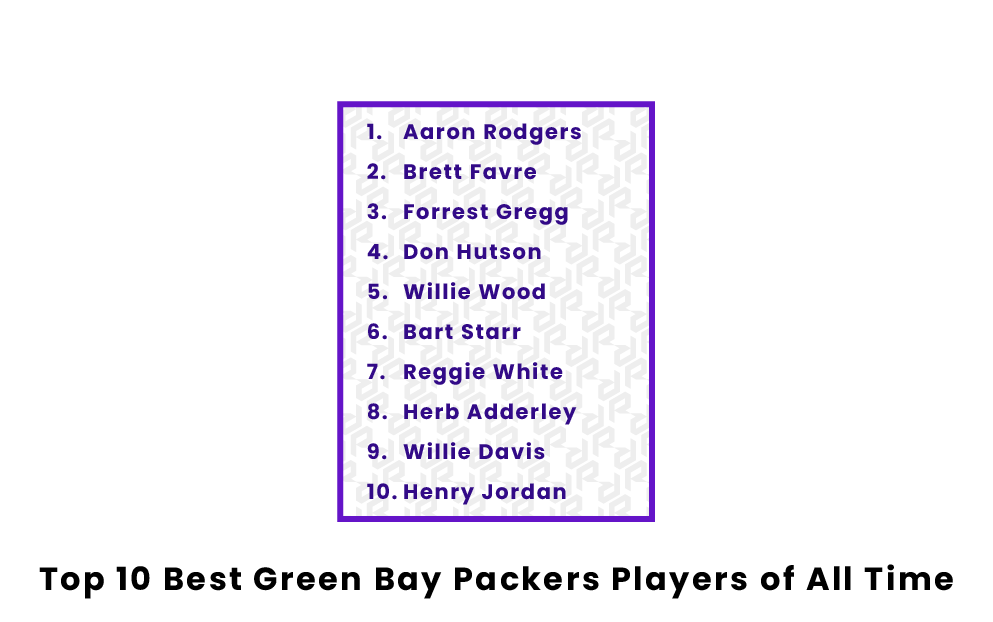 The Green Bay Packers have won more titles than any other team in NFL history, with 13 NFL Championships (four in the Super Bowl era). The franchise has been around for over a hundred years, and in that time, countless legends have worn the green and gold. To learn more about the top ten Green Bay Packers of all time, keep reading below.

Who are the best Green Bay Packers football players of all time?

As the active quarterback of the Green Bay Packers, Aaron Rodgers is one of the best in the game. He took over for Brett Favre in 2008, and three years later, he led the Packers to a Super Bowl win. He was named MVP of that Super Bowl, but that would be far from the only time Rodgers was the most valuable player. He has won four MVP awards in his career, including back-to-back honors in 2021 and 2022. Since 2009, his second full year as the starter, Rodgers has made 10 Pro Bowls and has been named an All-Pro five times. He has thrown the most touchdown passes of any Packer ever and is second behind only Favre in passing yards. There’s no doubt that he will make the Hall of Fame when he retires, but he is still playing quarterback at the highest level.

Before Rodgers, there was Brett Favre. The gunslinger from Mississippi was one of the most fearless men ever to play the quarterback position, routinely fitting passes into the tightest windows imaginable. His style of play did rack up plenty of interceptions, but he was too talented for fans to care. He led Green Bay to a Super Bowl victory in 1997, a run that came at the height of his career. The year prior, Favre won his first league MVP after leading the NFL in passing yards and touchdowns. He also won MVP the same season as his Super Bowl victory, but that wasn’t enough for the fun-loving quarterback. Favre won his third-straight MVP in 1998 after leading the league in passing touchdowns in all three of those years. Overall, he was a six-time All-Pro selection, and he also made 11 Pro Bowls before his retirement in 2011. Farve was inducted into the Pro Football Hall of Fame in 2016.

One of the best defensive linemen to ever play for the Packers, Forrest Gregg was among the game’s elite during his 15-year career. He debuted in 1956, and even after missing a year for the military, he was still an All-Pro and a Pro Bowler by 1959. That became a trend for the defensive tackle, as he made the Pro Bowl in eight of the next nine seasons and also was selected to six All-Pro teams in that span. He was part of the Packers teams that won NFL Championships in 1962 and 1966, and he was a key factor in Green Bay winning each of the first two Super Bowls in 1967 and 1968. He is a member of the Hall of Fame All-1960s Team and also went on to win a Super Bowl with the Dallas Cowboys in his final season in 1972.

Perhaps the best wide receiver of his era, Don Huston is also one of the best wide receivers to ever play for the Packers. He was a level above the rest, leading the league in receptions eight times and receiving yards seven times. In 1941, Hutson won the Joe F. Carr Trophy, the equivalent of the MVP award in today’s NFL. He was equally great in 1942, leading the league in receptions, receiving yards, and touchdowns to repeat as the Carr Trophy winner. Hutson made four Pro Bowls in his career and was an eight-time All-Pro selection, and his contributions on the outside helped Green Bay take home three NFL Championships from 1937-1945. Overall, Hutson is the franchise’s all-time leader in receiving touchdowns with 99 and is fifth in receiving yards, as well as being seventh in catches.

The best defensive back to ever play for the Packers, Willie Wood was a force to be reckoned with in the secondary. He debuted in 1960, and it wasn’t long before the league took notice. In 1962, Wood was named to the All-Pro Second Team and was also a Pro Bowler, just the beginning of a great stretch of his career. From 1962-1970, Wood was selected to the Pro Bowl seven times and was also a three-time All-Pro. He was on the Packers teams that won NFL Championships in 1962, 1963, and 1966, and he also won two Super Bowls with the organization in 1967 and 1968. His 48 interceptions are the second-most in franchise history. Wood is a member of the Hall of Fame All-1960s Team and was also inducted into the Pro Football Hall of Fame in 1989.

Though his list of accolades may not include the typical number of Pro Bowls or All-Pro selections, there is no questioning Bart Starr’s legacy. As the quarterback of the Packers, Starr led a number of incredible seasons and is one of the winningest quarterbacks in history. He took over as starter in 1957, and by the time he was done playing in 1971, he had accumulated five championships. Starr made three-straight Pro Bowls from 1960-1962, and following the 1961 season, he captained his team all the way to an NFL Championship. The Packers repeated as NFL champs the next year, but Starr’s best was yet to come. In 1966 at the last NFL Championship ever, Starr and Green Bay won their third title in five years, but the following season would be their best. Starr won the 1966 NFL MVP award and was named to the All-Pro First Team, but his best work was done in the postseason when he won Super Bowl MVP in the first-ever rendition of the event. He wasn’t done there, however, coming back with his team the following year to repeat as champions, and win another Super Bowl MVP.

There’s no question that Reggie White’s career stacks up with anyone else on this list, but unfortunately for Green Bay fans, he only spent six years of his time with the Packers. Still, he was spectacular in that span from 1993-1998, playing as one of the best members of the team. He was an All-Pro every year he played in Green Bay and also made it to the Pro Bowl in all six of those seasons. In 1999, his last with the team, White won his second Defensive Player of the Year award at 37 years old, highlighting his dominance even at an older age. His 68.5 sacks are fifth all-time in franchise history. It was a no-brainer to induct him into the Pro Football Hall of Fame after he retired, and he remains one of the most talented players ever to don a Packers jersey.

Like Willie Wood, Herb Adderley was a tremendous cornerback in his own right. The Philadelphia native played nine years in Green Bay, and he made the most of his time as a Packer. In 1962 in just his second professional season, Adderley was named to the All-Pro First Team, an honor he would repeat four more times in his career (as well as two Second Team nominations). Adderley was also a Pro Bowl selection five-straight times from 1963-1967, and in that span, he helped the Packers win the first two Super Bowls ever played. The cornerback was also a part of the Green Bay teams that won NFL Championships in 1962, 1963, and 1966, and he was later named to the Hall of Fame All-1960s Team. His 39 interceptions are the third-most in franchise history.

One of the many great Packers players of the 1960s, Willie Davis joined numerous teammates as part of the Hall of Fame All-1960s Team. He won NFL Championships in 1962, 1963, and 1966 before winning a pair of Super Bowls in 1967 and 1968. Individually, Davis was an outstanding defensive end, registering double-digit sacks five times in his career. From 1963-1967 he was selected to the Pro Bowl in each season, and he also made five All-Pro teams during his career. His 99.5 sacks are the most by any Packer ever, and in 1966 he finished fifth in MVP voting. Overall, Davis was one of the most feared defensive linemen of his time, but he was also widely respected. He won the Alan Page Community Award in 1967 and was known as a great man by all his teammates.

Henry Jordan was a terrific defensive lineman who left a lasting legacy on the field in Green Bay. The defensive tackle began his career in Cleveland, but he became an impact player soon after being traded to the Packers in 1959. The following year, Jordan was named a First Team All-Pro and also played in the Pro Bowl. Neither of these honors was very rare for Jordan, as he made the All-Pro First Team in each of the next four seasons and was a Pro Bowler twice in that span. In 1966, he was an All-Pro once again and also a Pro Bowl selection, the final time he would earn either accolade. He retired in 1969 after playing 11 seasons with the Packers and racking up 59.5 sacks, the seventh-most in franchise history despite the statistic not being recorded until his fourth year in the NFL.

Who is the best Green Bay Packers quarterback of all time?

The best Green Bay Packers quarterback of all time is Aaron Rodgers. Still playing at the top of his game in the NFL, Rodgers is one of the most talented quarterbacks the game has ever seen. He is a four-time MVP and won the Super Bowl in 2011, and Rodgers has also been selected to 10 Pro Bowls. He has thrown the most touchdown passes of any Packer ever and is second only to Brett Favre in passing yards.

Who is the best Green Bay Packers running back of all time?

The best Green Bay Packers running back of all time is Jim Taylor. Taylor was one of the best backs in the NFL in the late fifties and early sixties, piling up three All-Pro nominations and five Pro Bowl selections. He is second all-time in franchise history in rushing yards and first in rushing touchdowns. In 1962, he won the NFL MVP award, and in 1976 he was inducted into the Hall of Fame.

Who is the best Green Bay Packers wide receiver of all time?

The best Green Bay Packers wide receiver of all time is Don Hutson. Hutson certainly has the franchise marks, being first in receiving touchdowns and fifth in receiving yards, but he was also one of the greatest wideouts in the league during his career. He led the league in catches eight times, and in 1941 and 1942, he repeated as the winner of the Joe F. Carr Trophy, the equivalent of today’s MVP award.