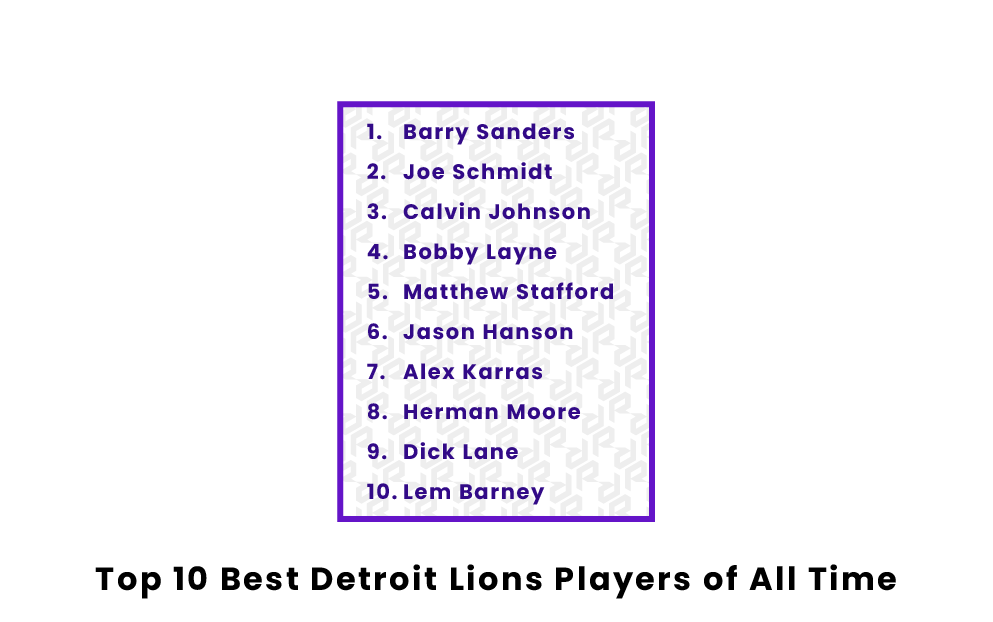 Before we knew them as the Detroit Lions, they were the Portsmouth (Ohio) Spartans. In 1934, the team was rebranded to the Lions, and since then, they have been both Detroit’s greatest joy and greatest disappointment. While the Lions have yet to win a Super Bowl, they have produced some extremely talented players. Below are ten of the best Detroit Lions Football Players of all time.

Who Are the Best Detroit Lions Football Players of All Time?

Barry Sanders is widely considered the Lions’ pride and joy. Born in 1968 in Kansas, Sanders was considered too short to be a running back and wasn’t played as one until the last five games of his high school career. After graduating, Sanders received a full-ride scholarship to Oklahoma State University. By 1988, Sanders was the leader of the NCAA with an average of 31.3 yards per kickoff return. In the same year, he set 24 NCAA records, scored 39 touchdowns, and was the recipient of the Heisman Trophy. By the end of his college career, Sanders had set 13 NCAA records.

Sanders began playing for the Detroit Lions in 1989 and was the third overall pick that year. His contract was for $6.1 million for five years of playing. In the 1990s, Sanders helped lead the Lions to the playoffs, and, by 1991, he was named MVP by the NFL Players Association. By the time he retired, Sanders had a total of 15,269 yards, and it was thought that he could have beaten Walter Payton’s record. Sanders retired in 1999 as one of the best running backs in NFL history and the best Lions player of all time.

Joe Schmidt was born in Pennsylvania in 1932. Even in high school, Schmidt was a force to be reckoned with. By the time he reached college, Schmidt had a reputation for being chronically injured and wasn’t selected by the Lions until the seventh round of the 1953 draft. Despite joining a team with an already strong defensive team, Schmidt soon proved his worth and became the leader of the Lions’ defensive team. Schmidt was known for his strength and his speed.

While all of Joe Schmidt’s statistics were not tracked, Schmidt served as captain of the Lions’ defense for nine years. He is also credited with leading the Lions to two NFL championships in 1953 and 1957. Schmid played for the Lions throughout his thirteen-year football career and, as solid proof of his love for the team, he returned to the Lions as a coach from 1967 to 1972. During his coaching career, the Lions had a 43-34-7 record and reached second place four times. Schmidt’s number (56) was retired, and he was inducted into the Professional Football Hall of Fame in 1973 and the Michigan Hall of Fame in 1970.

Calvin Johnson Jr. was born in Georgia in 1985. Johnson was 6’4” by the time he reached high school, where he developed a talent for football. By the time he had reached his senior year, Johnson was considered a top-ten wide receiver prospect and a top-100 player. Johnson played for Georgia Tech, and during his time there was a two-time All-American and earned the Biletnikoff award in 2006. Johnson was drafted during the second round of the 2007 draft by the Lions.

Shortly into his career, Johnson was given the nickname “Megatron” for his strength and ability. Johnson’s career began to take off in 2008 when he finished the season with 78 catches, 1,331 yards, and 12 touchdowns. By the time Johnson retired in 2015, he had several NFL records. Johnson continues to hold the Lions’ record for most receiving yards in a season (1,964 yards in 2012) and most consecutive games with more than 100 receiving yards. He also holds the Lions’ record for most receptions and receiving yards (731 and 11,619, respectively).

Bobby Layne was one of the most beloved Lions players, so much so that Lions fans still blame his retirement on the Lions’ failure to win a Super Bowl. Layne was born in 1926 in Texas. Layne’s early life was marked by tragedy as his father died when he was only six years old. Layne attended the University of Texas as a baseball player, and while he was talented enough to receive offers from MLB teams, he was better at football. Layne was drafted to the Pittsburgh Steelers in the third round of the 1948 draft before almost instantly being traded to the Chicago Bears. Layne joined the Lions in 1950.

Layne was known and loved for his party animal personality and for attending practice and even some games severely hungover. One year, after leading the Lions to victory in 1957, Layne was traded to the Pittsburgh Steelers, where he brought his football prowess and helped the Steelers have some of their best seasons. It was often said that Layne never truly lost a game; time simply ran out on him.

Born in 1988 in Florida, Matthew Stafford moved around a lot as a kid before finally settling in Texas. His time at Highland Park turned him into 2006’s top NCAA quarterback prospect. Stafford signed with the University of Georgia and became the first freshman to start since 1988. Stafford chose to skip his senior year to enter the NFL draft. Stafford was the first pick of the 2009 draft due to the fact that he signed with the Detroit Lions one day before the official start of the draft.

During his time with the Lions, Stafford was the 2011 NFL Comeback Player of the Year,  was named to the Pro Bowl in 2014, and was the Offensive MVP that year. In 2019, Stafford accumulated 40,000 yards in 147 games, making him the fastest player to reach this milestone. Stafford played with the Lions until the 2022 season, after which he signed with the Los Angeles Rams. During the 2022 season, Stafford went on to win his first Super Bowl, where he was proudly cheered on by Lions fans.

Jason Hanson was born in Washington in 1970, and he started off as a soccer player. By the time he reached high school, his soccer abilities had helped him become a top kicker for his team. Hanson was more than just a football player; he also maintained a 4.0 GPA while in high school. His high academic and athletic performances continued through his college years. He attended Washington State University, where he walked on to the football team as a kicker. After a stellar college career, Hanson entered the 1992 draft.

Hanson was the 56th pick in the second round of the NFL draft. During his first season with the Lions, Hanson was kicking with an 80% accuracy. Hanson ranks fourth in NFL history for career points scored (2,150) and field goals made (495), while he ranks sixth in NFL history for games played (322). Even after his retirement in 2013, Hanson remains a beloved Lions player.

Alex Karras was born in 1935 in Indiana. Karras and his two older brothers were phenomenal football players and were recruited heavily by colleges. The University of Iowa wanted Karras more than any other school, and after Karras’s graduation, a few coaches took Karras and his brothers to a cabin for the summer. By the end, Karras was signed on to be part of the team. While Karras was highly sought after, he and coach Forest Evashevski disagreed as Karras didn’t want to be both an offensive and defensive player. During his college years, he won the Outland Trophy and was a runner-up for the Heisman Trophy. Karras was one of the three linebackers in history to reach runner-up.

In the 1958 draft, Karras was the 10th overall pick. Shortly before he joined the Lions, Karras wrestled professionally for six months. During the 1960 season, Karras played the Browns in the playoffs after two less-than-stellar seasons. That year, Karras was selected for First Team All-Pro and voted to his first Pro Bowl. During the 1963 season, Karras was suspended for gambling after he purchased a bar that was a hub for some organized crime groups. After his retirement, Karras began acting, starting with the adaptation of his book, Paper Lion, and continuing with a career that spanned several years.

Herman Moore was born in 1969 in Virginia. Moore’s football career began at the age of six. Despite his early starting age, Moore wasn’t a stand-out tight end or wide receiver, but he was good at basketball and was a fast runner. Everything changed for Moore during his senior year game when he made the game-winning interception. After that, Virginia and other schools made him offers. By his junior year at Virginia, it was clear that Moore was going to be a star.

Moore was the 10th overall pick in the 1991 draft. The Lions were struggling at this time, but Moore didn’t play until the first playoff game, where he caught six passes and a touchdown, leading the Lions to the NFC championship game. In 2001, Moore tore an abdominal muscle which was the end of his Lions career. After his retirement, Moore started Team 84, a marketing and advising agency.

Dick Lane was born in 1928 in Texas. After a rough upbringing, Lane came to learn and love football and practiced in the streets of Austin. Lane played basketball and football and helped lead his high school team to the state championships. Lane joined the army at age 19 after playing football for one semester in college. He served in WWII and the Korean War while playing football during his downtime.

In 1952, Lane asked the Los Angeles Rams’ coach for a tryout after showing the coach his high school and college tapes. While he initially struggled with various aspects of playing at such a high level. Tom Fears tutored him, and Lane visited Fears’s dorm room every night; he earned the nickname “Night Train”. Lane is credited with transforming the cornerback position and for his tackle. Lane retired in 1965. Lane was hired by the owner of the Lions, William Clay Ford, as a special staff assistant from 1966 to 1972.

Lem Barney was born in Mississippi in 1945. After being named All-State as a quarterback in high school, Barney joined the Jackson State College team and began playing cornerback. Barney excelled with 26 interceptions in three seasons. Barney was mentored by Lions’ former player and recruiter Dick Lane. Barney earned the All-Southwestern Athletic Conference honors from 1964-1966. Barney was the 34th overall pick in the 1967 NFL draft. Barney wore the number 20, which was also worn by Billy Sims and Barry Sanders. Barney became a close friend of singer Marvin Gaye and Barney and Mel Farr sang backup on Gaye’s song “What’s Going On?”

Barney was respected NFL-wide, and signal-callers didn’t want to throw in his direction. Barney was also known for being a team player which helped raise morale and improve the Lions’ record. Barney retired in 1977 and worked in public relations for Michigan Consolidated Gas Company’s Detroit Medical Center and became a pastor.

Who is the best Detroit Lions quarterback of all time?

Bobby Layne is considered to be the best Lions quarterback of all time. Throughout his entire career, Layne led the Lions to four NFL title games and helped them win three times. During his time on the field, Layne had every passing record.

Who is the best Detroit Lions running back of all time?

Barry Sanders is considered to be the best Lions quarterback of all time. Sanders rushed more than 1,500 yards in a single season five times. During his best game, he rushed 237 yards.

Who is the best Detroit Lions wide receiver of all time?