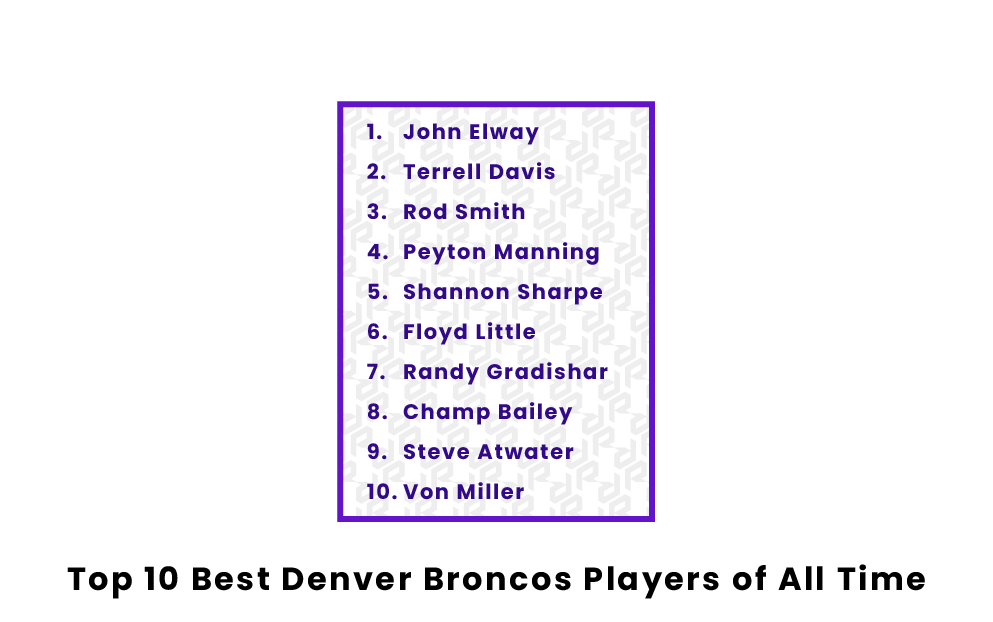 As one of the most successful NFL franchises of all time, it only makes sense that the Denver Broncos have played host to some of the most talented players that the NFL has ever seen. Across their eight Super Bowl appearances, of which they won three, the Broncos have been led by many different players who have gone down in history as some of the best to ever play their position. These ten Broncos are the best to have ever put on their iconic orange jerseys.

Who are the Best Denver Broncos Football Players of All Time?

Perhaps the most loyal and prolific Bronco of all time, John Elway’s reputation precedes him, and for good reason. After being drafted by the Baltimore Colts but promptly traded to the Broncos before ever stepping foot on the field, Elway spent the entirety of his career in Denver. He led the Broncos to their first two Super Bowl wins in history, which came in back-to-back years: 1998 and 1999. In their 1999 Super Bowl win, Elway was awarded the Super Bowl MVP award for his outstanding efforts.

Across his career, he made the Pro Bowl nine times, was named to the second-team all-pro team three times, and was named the NFL’s Most Valuable Player in 1987. Elway returned to the Broncos in 2011, but this time as the General Manager for the team, and quickly brought them back to prominence, culminating in another Super Bowl win in 2015. Much of the Broncos’ success throughout history has been owed in large part to John Elway.

Terrell Davis will go down as one of the greatest running backs in the history of the NFL, and he made that name for himself with the Denver Broncos. Like Elway, Davis never actually played a game for another NFL team. He joined Denver in 1995, and was forced to retire in 2001 due to injuries. However, in that span, what Terrell Davis did on the football field can be considered nothing short of magical. For one, he’s one of the few players to rush for over 2,000 yards in a season, which he did in 1998 with 2,008 yards. He was named the NFL’s Most Valuable Player that season. Like Elway, Davis was a part of the Broncos’ back-to-back Super Bowl wins, but where Elway won Super Bowl MVP in the 1999 win, Davis won it in 1998. In that Super Bowl, he ran for over 150 yards and three touchdowns.

Rod Smith leaves little doubt that he was the greatest Denver Broncos wide receiver of all time. Similar to both John Elway and Terrell Davis, Rod Smith spent his entire career with the Denver Broncos. His career began in 1994 and lasted until his retirement in 2007. Over the course of his lengthy career, Smith amassed 11,389 total receiving yards and 68 touchdowns which came from 849 total receptions. Rod Smith was also a member of the Broncos squad that won the organization’s first two Super Bowls, and has since been enshrined in the Ring of Fame in the Broncos’ stadium, which recognizes the team’s best players of all time. Rod Smith’s success is even more compelling considering that he wasn’t even drafted. He went undrafted but was eventually signed by the Denver Broncos, and is noted as one of the most successful undrafted free agents of all time.

Peyton Manning is one of the most ubiquitous names in all of football, and he spent many of his prime years with the Denver Broncos. Throughout his career, Manning was awarded the NFL’s Most Valuable Player award five times, one of which came with his epic 2013 season with the Broncos. The 2013 Broncos squad had what many consider the best offense in NFL history. Manning reached a new pinnacle in his career that year, throwing for single season records in both touchdowns (55) and yards (5,477). Although the Broncos lost in the Super Bowl that year, the offense will live on forever in the history books.

In the 2015 season, however, Manning and the Broncos found redemption in the Super Bowl by beating the Carolina Panthers. After that Super Bowl win, Manning rode off into the proverbial sunset by announcing his retirement from the NFL. He’ll go down as one of the great Broncos of all time.

Noted by many as being one of the greatest tight ends of all time, Shannon Sharpe was instrumental to the highly-successful Broncos squad of the late 1990s that brought home back-to-back Super Bowl wins. Over the course of his lengthy career, Sharpe managed to secure four appearances on the First-Team All-Pro list, which is one of the highest honors in the NFL. In addition, he also managed to appear in the Pro Bowl eight times and was even named to the NFL’s All-Decade team for the 1990’s, which recognizes the very best players from that entire decade. Like some of the other greats on this list, Sharpe’s name appears on the Broncos’ Ring of Fame in their stadium. By the time of his retirement, Sharpe had managed to put up some serious numbers. He garnered over 10,000 receiving yards to go along with a more-than-respectable 62 touchdowns.

Floyd Little was one of the first players to really bring acclaim to the Denver Broncos, and like some of the other names on this list, he spent the entirety of his career with the team. Little began his professional career in Denver in the 1967 season. He made his first Pro Bowl a year later in 1968. Soon after, in 1969, Little was named a First-Team All-Pro player. But it wasn’t until 1971 that Little reached his peak as a player. That season, he led the league in rushing yards with 1,133, which was a truly substantial total for that early era in the NFL. Two years later in 1973, he led the league in rushing touchdowns with 12. Throughout his career, Floyd Little was the essential definition of consistency, as evidenced by his five Pro Bowl appearances. His jersey number, #44, has since been retired from the Denver Broncos, and Little’s name is firmly planted in the Ring of Fame.

One of the most fearsome Broncos of all time, Randy Gradishar cemented his legacy as one of the league's best linebackers thanks to his consistency and leadership. Gradishar was a member of what was known as the “Orange Crush,” which was an era of the Broncos defense where they stood firmly atop the league, and were a truly feared unit. Gradishar was the foundation for the Orange Crush, which landed him on the First-Team All-Pro list twice, to go along with seven career Pro Bowls. Perhaps chief amongst all of Gradishar’s many achievements, however, was his being named the NFL Defensive Player of the Year in 1978. A year before that, in 1977, he helped take the Broncos to their first ever Super Bowl appearance, although they were ultimately defeated by the Dallas Cowboys. Over the course of his long career with the Broncos, Gradishar managed to amass over 2,000 total tackles (2,049), along with 20 interceptions and 4 touchdowns.

Throughout his career with the Denver Broncos, which was between 2004 and 2013, Champ Bailey was one of the brightest-shining defensive stars in the entire National Football League. Champ Bailey was a cornerback that had true shutdown ability, and he spent much of his career doing just that, shutting down and frustrating some of the best wide receivers in the league. His efforts earned him a spot on the First-Team All-Pro list three times, and an additional four times on the Second-Team list. He made the Pro Bowl a whopping 12 times, with his first coming in 2000, and his last in 2012. Bailey was even named to the prestigious All-Decade team for the 2000s.

Throughout his long career, Bailey totaled 203 passes defended, 52 interceptions, and 908 total tackles. His incredible legacy has secured him spots in both the Broncos’ Ring of Fame, and the Pro Football Hall of Fame.

Steve Atwater was perhaps the most feared Broncos player of all time. Ball carriers feared him for his ability to deliver crushing tackles, and quarterbacks feared him for his ball-hawking ability, as he was always a risk to pluck an interception out of the air. Atwater was a member of the late 1990s two-time Super Bowl squad, and had a notable game in the first of the two. He secured six solo tackles, defended two passes, sacked the quarterback once, and even forced a fumble. For his regular-season play, Atwater was rewarded with two appearances on the First-Team All-Pro list, and was voted to the Pro Bowl eight times. He was also selected for the 1990s All-Decade team thanks to his consistency over that timespan. And naturally, with a career as successful as Atwater’s, it only makes sense that he was selected to be a member of the Professional Football Hall of Fame in 2020.

Von Miller is by far the most memorable out of all Denver pass rushers, thanks both to his incredible skill and big personality. Miller began his professional career out of college in 2011 with Denver, and was named Defensive Rookie of the Year. He continued his wild success by making the First-Team All-Pro list in 2012, 2015, and 2016. He made the Second-Team list in 2011, 2014, 2017, and 2018. His ability to consistently wreak havoc on offenses garnered him some of the NFL’s top honors, including eight Pro Bowl appearances to date. He was also named to the 2010s All-Decade team.

Perhaps the pinnacle of Miller’s career came in the postseason of the 2015 season, where he and the Broncos won the franchise’s third Super Bowl. Miller was named Super Bowl MVP thanks to his six tackles, one pass defended, 2.5 sacks, and 2 forced fumbles which essentially sealed the game for Denver. He was also beloved by Denver fans for his wild dancing and magnetic personality.

Who is the best Denver Broncos quarterback of all time?

The greatest quarterback of all time for the Denver Broncos is John Elway. Elway spent the entirety of his long career with Denver, and managed to bring home the first two Super Bowl wins for the organization. He’s known as one of the greatest quarterbacks of all time, and he did it all in a Broncos jersey. He was given the incredible honor of Super Bowl MVP for his efforts, along with a regular season MVP award in 1987.

Who is the best Denver Broncos running back of all time?

Terrell Davis is the greatest Broncos running back of all time. Davis’ successes as a Bronco are almost too many to count. He won two Super Bowls with the team, and won the Super Bowl MVP award in one of them. He also won a regular-season MVP award in 1998, when he ran for over 2,000 yards in a single season, which to this day is an achievement that has only been matched a handful of times.

Who is the best Denver Broncos wide receiver of all time?

Rod Smith is the greatest wide receiver to ever have played for the Denver Broncos. Smith’s success was contained to a few seasons, but he burned incredibly brightly in those years. He was absolutely instrumental to the Broncos’ back-to-back Super Bowl wins, and he was named to three Pro Bowls, along with twice being listed on the Second-Team All-Pro list. He leads all Broncos in catches, receiving yards, and receiving touchdowns.