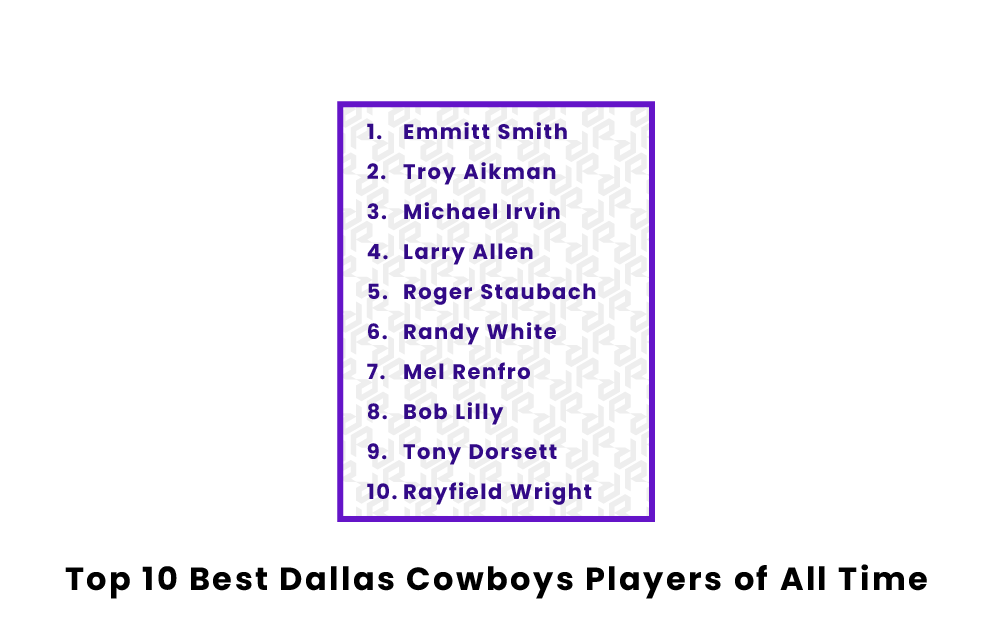 Who are the best Dallas Cowboys football players of all time?

The Dallas Cowboys acquired Emmitt Smith as a result of the famous Herschel Walker trade with the Minnesota Vikings, and he would help the Dallas Cowboys rebuild their franchise into a powerhouse in the 90s after being selected in the first round of the 1990 NFL Draft. He is also regarded by many as the greatest Cowboys player of all time. Coming from the University of Florida, it did not take long for Smith to make his presence known in the league. In his rookie year, the running back recorded 937 rushing yards and 11 touchdowns, earning Offensive Rookie of the Year honors. Smith led the Cowboys back to the top of the NFL, helping them win three Super Bowls in a mere span of four years from 1992 to 1995 and earning Super Bowl MVP in 1993. Smith’s career spanned from 1990 to 2004, and he retired as the NFL’s all-time rushing yards leader with 18,355 yards and the NFL’s all-time rushing touchdowns leader with 164 touchdowns. He was inducted into the Pro Football Hall of Fame in 2010.

Troy Aikman proved to be precisely the quarterback the Cowboys needed in order for their dynasty to take off in the 90s. Before being selected by Dallas with the first overall pick in the 1989 NFL Draft, Aikman was an All-American at UCLA, where he finished his college career as the third-rated passer in NCAA history at the time. At 6’4 219 lbs, he had the ideal build for a great NFL quarterback. Despite a few slow years at the beginning of his career, Aikman led the Cowboys in their turn-around 1992 season, helping them win a Super Bowl over the Buffalo Bills and receiving Super Bowl XXVII MVP after completing 22 of 30 passes for 273 yards and four touchdowns. At the time of his retirement, Aikman was the winningest quarterback during any decade in NFL history. He achieved 90 wins combined with a career total of 32,942 yards and 165 touchdowns with a passer rating of 81.6. He was inducted into the Pro Football Hall of Fame in 2006.

Drafted 11th overall in the 1988 NFL Draft, Michael Irvin was one of the greatest wide receivers in NFL history. Before going to the professional league, Irvin had a successful college career with the Hurricanes at the University of Miami. At 6’2 207 lbs, Irvin had the makings of a potential star receiver in the NFL, and he lived up to that potential. Irvin played a vital role in the establishment of the franchise’s dynasty in the 90s. He had a 12-year career spanning from 1988 to 1999, all of which he spent with the Cowboys. From 1991 to 1998, he put up 1,000-yard seasons in every year except for one. Overall, Irvin completed 750 receptions for 11,904 yards in his career, completing 47 out of his 159 games with 100 or more receiving yards. He was inducted into the Pro Football Hall of Fame in 2007.

Before being selected by the Dallas Cowboys as the 46th overall pick in the second round of the NFL Draft, Larry Allen started his college career at Butte Junior College and transferred to Sonoma State in San Francisco. Allen was a dominant guard and tackle, gifted with athleticism and physicality at 6’3 and 335 lbs. He had a 14-year career in the league spanning from 1994 to 2007, 12 of which he spent with the Cowboys from 1994 to 2005 before finishing his career with the San Francisco 49ers. Allen is regarded by many as one of the greatest guards in NFL history, and is among a select few players to be named to multiple all-decade teams–both the all-1990s team and the all-2000s team. He has received many honors, notably including the NFL Offensive Lineman of the Year in 1997 and the NFC Offensive Lineman of the Year in 1996 and 1997. He was inducted into the Pro Football Hall of Fame in 2013.

Before coming to the NFL, Staubach played for the US Naval Academy, where he received the Heisman Trophy in 1963. His start on the professional stage with the Cowboys was delayed by five years when he was sent to Vietnam under military commitment. Despite having to start his career past his physical prime, he still experienced great success at the helm of an NFL offense. He dominated the NFL throughout the 1970s, playing from 1969 to 1979 and leading the league in passer rating and wins for the decade. He ended his 11-year career with 22,700 passing yards, 2,264 rushing yards, and 153 touchdown passes. He brought the Cowboys to four Super Bowls and helped them win two Lombardi Trophies, also receiving the Super Bowl VI MVP award. He was the 1971 Player of the Year, named to both the First-Team All-1970s Squad and the NFL 100 All-Time Team. He was inducted into the Pro Football Hall of Fame in 1985.

Before being the second player drafted overall in the 1975 NFL Draft as the Cowboy’s first pick, Randy White was an All-American defensive end at the University of Maryland. White’s career spanned from 1975 to 1988, during which he proved to be an essential part of the Cowboy’s defensive line. In his first few years in the league, White earned Super Bowl XII Co-MVP and was named the NFC Defensive Player of the Year in 1978. Arguably, no other player in Cowboys history was as dominant or reliable at their position as Randy White was–he missed only one game in all his 14 seasons. He was known for having a contagious work ethic to match the talent that pushed those around him to be better. During White’s career, he accumulated 1,104 tackles, 701 solo tackles, and 111 sacks. He was inducted into the Pro Football Hall of Fame in 1994.

Melvin “Mel” Renfro played football and track and field for the University of Oregon before the Dallas Cowboys selected him with their second-round pick in the 1964 NFL Draft. Renfro was a defensive chess piece for the Cowboys during his career that spanned from 1964 until 1977, although he is most famous for his time and performance at cornerback. Once he switched from safety to cornerback in 1970, teams were uncertain how to deal with Renfro. The best recipe proved to be avoiding him altogether, as Renfro experienced a 10-game stretch that saw him targeted by opposing quarterbacks 36 times. He holds the Dallas Cowboys franchise records for most career interceptions and most career interception return yards of all time, with 52 and 626, respectively. Mel Renfro was also a dynamic threat in the special teams game, leading the NFL in punt returns, punt return yards, kickoff returns, and kickoff return yards as a rookie. He was inducted into the Pro Football Hall of Fame in 1996.

Bob “Mr. Cowboy” Lilly was the franchise’s first-ever draft pick in the NFL, hence his nickname. Before being drafted by the Cowboys in 1963, Lilly was a two-time All-Southwest Conference pick and a consensus All-American choice at Texas Christian University. Standing at 6’5, weighing 260 lbs, Lilly was a strong force at defensive tackle/end for the Cowboys from 1961 to 1974. Though he started as a defensive end in the league, he found most of his success once after transitioning to defensive tackle, where he spent most of his career. Lilly had a reputation for being reliable as a player, playing 196 consecutive regular-season games and only missing one game in his whole career due to a leg injury. He was also dependable on the field during play; he was known for being an equally good rushing defender and pass rusher and even contributed to offensive efforts when he could, returning 18 fumbles for 109 yards, scoring four touchdowns total. Lilly was inducted into the Pro Football Hall of Fame in 1980.

Before becoming the Dallas Cowboys’ first overall pick in the 1977 NFL Draft, Tony Dorsett had already been rolling with momentum from lighting up the college football scene at the University of Pittsburgh. At Pitt, the 5’11” 192 lbs star had been a four-time All-American and won the Heisman Trophy as a running back. Dorsett immediately adapted to the NFL’s style of play, and he quickly began to dominate–he rushed for 1,007 yards and scored 12 touchdowns in his rookie season, earning him a virtually unanimous vote for the 1977 Offensive Rookie of the Year and All-Rookie Squad honors. During his career, he rushed for 12,739 yards total, scoring 546 points on 91 touchdowns. He also holds the record for the longest touchdown in NFL history–a 99-yard run against the Minnesota Vikings in 1982, which has since only been tied once by Derrick Henry in 2018. He was inducted into the Pro Football Hall of Fame in 1994.

Unlike many others on this list, Rayfield Wright did not get selected early in the draft. He was picked in the seventh round of the 1967 AFL-NFL Draft without much hope of making the roster–at least, that’s what the Cowboys thought at the time. However, when they saw Wright's raw athleticism, passion, and competitive nature that ended up making him so special, they saw how he could enhance the team culture. After fighting to earn a permanent spot on the starting roster at right tackle following a previous starter’s ankle injury, the rest was history for Wright in the NFL. The 6’6 255 lbs tackle cemented himself in the league as an unstoppable force. From 1971 to 1976, he earned six consecutive first- and second-team All-NFL honors, and was also selected to the Pro-Bowl in each of those seasons. He was inducted into the Pro Football Hall of Fame in 2006.

Who is the best Dallas Cowboys quarterback of all time?

Troy Aikman is the best Dallas Cowboys quarterback of all time, although an argument can credibly be made for Roger Staubach. Aikman would guide the Cowboys to three Super Bowl victories and be named Super Bowl XXVII MVP. He would retire with 32,942 passing yards and 165 passing touchdowns from his career. He would make six Pro Bowls during his 12 year career. Not only did Aikman perform on the field, but he also was one of the winningest quarterbacks in the history of the NFL.

Who is the best Dallas Cowboys running back of all time?

The Dallas Cowboys have had some great running backs in the history of the franchise, but none are more remarkable than Emmitt Smith. Smith is a Cowboys legend for many reasons, ranging from his performance on the field to the way that Dallas acquired him. Emmitt Smith is the NFL’s all-time leader in career rushing attempts, yards, and touchdowns. He was the 1993 NFL MVP, selected All-Pro four times, named to the Pro Bowl eight times, and was a crucial member of three Super Bowl-winning squads.

Who is the best Dallas Cowboys wide receiver of all time?

Michael Irvin is the best wide receiver in the history of the Dallas Cowboys franchise. Drafted in 1988, Irvin spent his 12-year career in Dallas, helping build one of the sport’s great dynasties. Widely regarded as one of the best receivers of the 1990s, he made the Pro Football Hall of Fame All-1990s Team. Irvin was selected All-Pro and played in five Pro Bowls during his career. Irvin was also a member of three Super Bowl-winning squads in Dallas.