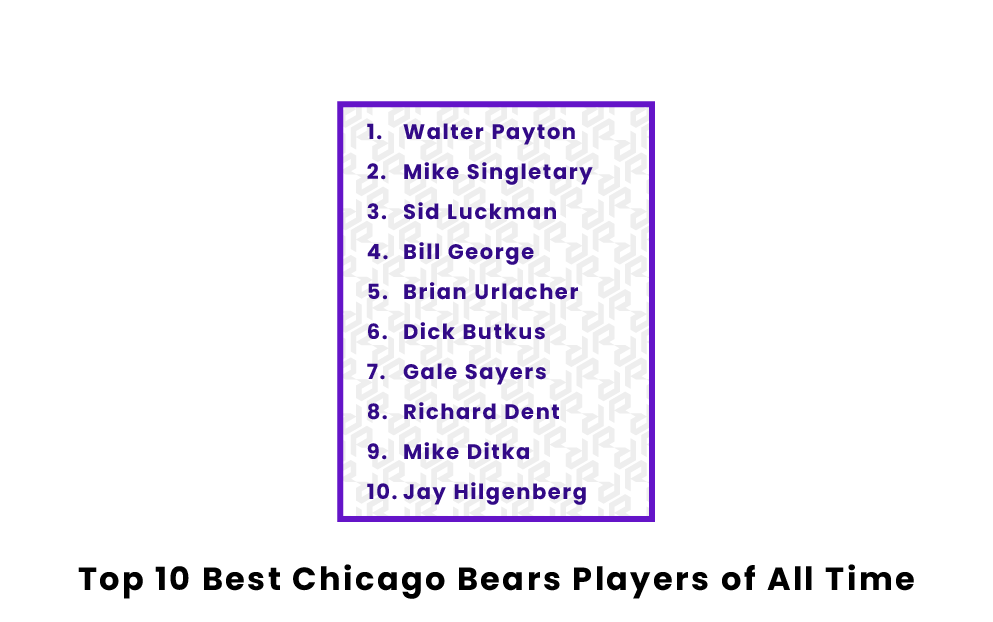 Having been around for over a century, the Chicago Bears are one of the oldest franchises in the NFL. The team has won nine championships in its time and has had several talented players don the Bears uniform. Keep reading below to learn more about the ten best Chicago Bears of all time.

Who are the best Chicago Bears football players of all time?

One of the most giving men to ever play in the NFL, Walter Payton’s legacy extends far beyond what he did on the field. His charitable efforts earned him his own award, the Walter Payton Man of the Year Award, which has been given to the player most committed to philanthropy and community impact every season since 1999. When he laced up his cleats, however, Payton was anything but kind to opposing defenses. He rumbled his way to eight All-Pro selections and nine Pro Bowls during his 13 years in Chicago. The running back had his best season in 1977 when he led the league in rushing yards and rushing touchdowns and won the MVP award. In 1985, Payton was crucial to Chicago’s success and was a key factor in helping the Bears win the Super Bowl that season. He is the franchise’s all-time leader in carries, rushing yards, and rushing touchdowns and is one of the greatest running backs in NFL history.

Though modern football fans know him as a coach, Mike Singletary was one of the greatest defensive players of his era. Standing in the middle of the vaunted Chicago Bears defenses of the 1980s, Singletary played as one of the league’s best middle linebackers. He was a Pro Bowler in his third season and an All-Pro by his fifth, but in 1985 Singletary had his best year. He won the Defensive Player of the Year award and captained Chicago’s defense to a Super Bowl victory. He continued to dominate throughout the second half of the decade, winning Defensive Player of the Year honors again in 1988 and finishing fourth in the MVP voting. His consistency in the eighties and early nineties was remarkable, as the linebacker was selected to the Pro Bowl every year from 1983-1992 and was an All-Pro every season from 1984-1991. Overall, Singletary was a 10-time Pro Bowler and eight-time All-Pro. He was enshrined in the Hall of Fame in 1998.

One of the most well-rounded players in Chicago Bears history, Sid Luckman was one of a kind. The Brooklyn native played defensive back but was also the team’s quarterback, and he helped to revolutionize the position. At a time when football was mostly played on the ground, Luckman took to the air to start winning games. He led the league in passing yards and touchdowns three times and was known for throwing it further downfield than most other quarterbacks of the time. In 1943, his first season as the league’s top passer, Luckman won the Joe F. Carr Trophy, equivalent to the MVP award in today’s NFL. He helped lead Chicago to a golden era of football, winning four NFL Championships between 1941-1947. Luckman was a six-time All-Pro selection, named a Pro Bowler three times, and was a member of the Hall of Fame All-1940s Team.

An absolute force on the defensive line and as a linebacker, Bill George was one of the best players on his side of the ball during the 1950s. In his third full season in 1954, George was named to his first Pro Bowl, but the next year would be when he really began dominating. From 1955 to 1961, George was selected to the Pro Bowl and the All-Pro First Team every year, terrorizing opposing offenses and captaining many great Chicago Bears defenses. In 1963, at 34, George was still the middle linebacker in charge for Chicago, and he made his eighth and final All-Pro team. After that season, he and the Bears went on to win the NFL Championship, one of the last titles before the integration of the Super Bowl. He has been named a member of the Hall of Fame All-1950s Team and was inducted into the Pro Football Hall of Fame in 1974.

One of the many names in the long list of great Chicago Bears middle linebackers, Brian Urlacher was one of the most respected players in the game in the 2000s. He debuted right at the turn of the century for the Bears, and in his first year, he was named the Defensive Rookie of the Year in addition to making the Pro Bowl. The next decade would be a great one for Urlacher, as he made five All-Pro teams and was named a Pro Bowler six more times. In 2002, he led the league in solo tackles, but his best year came in 2005. That season, Urlacher had six sacks and 122 tackles, and he won the Defensive Player of the Year award. His name was synonymous with football in the 2000s, so it was an obvious decision when he was named to the Hall of Fame All-2000s Team.

It should be no surprise that the next player on this list was also a middle linebacker and was also one of the best in the game during his prime. Dick Butkus is a name any Chicago Bears fan will know, and for a good reason. Born and raised in Chicago, Butkus made his debut with the team in 1965. He nearly won Rookie of the Year but had to settle for a Pro Bowl appearance and an All-Pro First Team nomination. Those two honors would not be rare for Butkus, as he racked up eight Pro Bowls and six All-Pro selections during his short but sweet nine-year career in Chi-Town. He finished in the top six of MVP voting four separate times and was known as a destructive force on the defensive side of the ball. He was named to the Hall of Fame All-1960s Team despite only playing five years in the decade and is a member of the Hall of Fame All-1970s Team.

When the draft came around in 1965, Gale Sayers had a tough decision to make. The Wichita native had just graduated from Kansas, and his local Kansas City Chiefs had taken him fifth overall in the AFL Draft. However, there was competition, as Sayers was also drafted by the Chicago Bears with the NFL’s fourth overall pick. Ultimately, Sayers decided to head north, and he instantly became a legend in the Bears uniform. He won Rookie of the Year in 1965 and was an All-Pro First Team player in his first five seasons. Sayers led the league in rushing twice during that span and was also a talented receiver out of the backfield, and his play led to four Pro Bowl selections. Unfortunately, injuries began to derail his career in 1970, and he was forced to retire at just 28 years old. Still, he was one of the most talented players of his era and was named a member of the Hall of Fame All-1960s Team.

When he was drafted in the eighth round in 1983, not many people expected great things from Richard Dent. Yet, Dent was determined to prove them all wrong, and he turned into one of the greatest Chicago Bears to ever take the field. He was an All-Pro and a Pro Bowler in both his second and third seasons, but what he did in the playoffs was even better. Following the 1985 regular season, Dent went on a tear in the playoffs, helping push the Bears all the way to the Super Bowl. There, Dent won Super Bowl MVP as he and Chicago took down the New England Patriots. Overall, Dent made four All-Pro teams in his career and was also a four-time Pro Bowler. He would go on to win another Super Bowl with the San Francisco 49ers in 1995, but his legacy lies in Chicago. Dent’s 124.5 sacks are the most ever by a Bear, and in 2011 he was inducted into the Hall of Fame.

Like Singletary, Ditka may be known by many fans as a great coach, but his play on the field was equally exceptional. As a tight end, Ditka burst onto the scene in 1961, recording over 1,000 receiving yards and winning the Rookie of the Year award. He was also selected to the Pro Bowl that year, starting a streak of five-straight nominations to the event. The following year, Ditka nearly eclipsed 1,000 yards again, and he was honored with his first All-Pro selection. He may have only played six seasons in Chicago, but he left his mark with five Pro Bowls and five All-Pro Teams, as well as a personality and fighting spirit that even his pads couldn’t contain. Before he went on to coach 14 seasons in the NFL, Ditka was honored in the Pro Football Hall of Fame in 1988 for his play as a tight end.

The greatest offensive lineman to ever play for the Bears, Jay Hilgenberg, came just at the right time for the franchise. He didn’t become a full-time starter at center until 1984, but the next year would be his best. He was selected to his first Pro Bowl, and his leadership on the offensive line helped lead the Bears to their first Super Bowl victory in 1985. He would go on to make the Pro Bowl for the next six seasons in a row, and from 1986-1990 he earned four All-Pro nominations. Hilgenberg was remarkably healthy despite playing such a vulnerable position, appearing in all 16 games nine different times in his career. He will be remembered as one of the franchise’s best offensive linemen and was a key part of their Super Bowl run.

Who is the best Chicago Bears quarterback of all time?

The best Chicago Bears quarterback of all time is Sid Luckman. Also playing as a defensive back during his time in Chicago, Luckman helped revolutionize the quarterback position during his time in the NFL. He was one of the best deep-ball passers in the game and led the league in passing yards three times. He also led the Bears to four NFL Championships while at the helm of the franchise.

Who is the best Chicago Bears running back of all time?

The best Chicago Bears running back of all time is Walter Payton. Not just the best running back in franchise history, Payton is also one of the best running backs in the history of the sport. He won the 1977 NFL MVP and led the Bears to a Super Bowl victory in 1986. He is the Bears’ leader in rushing yards, rushing attempts, and rushing touchdowns and is the franchise’s greatest player ever.

Who is the best Chicago Bears wide receiver of all time?

The best Chicago Bears wide receiver of all time is Ken Kavanaugh. Kavanaugh is the franchise’s all-time leader in receiving touchdowns with 50 and 10th in receiving yards. He was a two-time Pro Bowler and won three NFL Championships with the Bears. Kavanaugh is also a member of the Hall of Fame All-1940s Team.