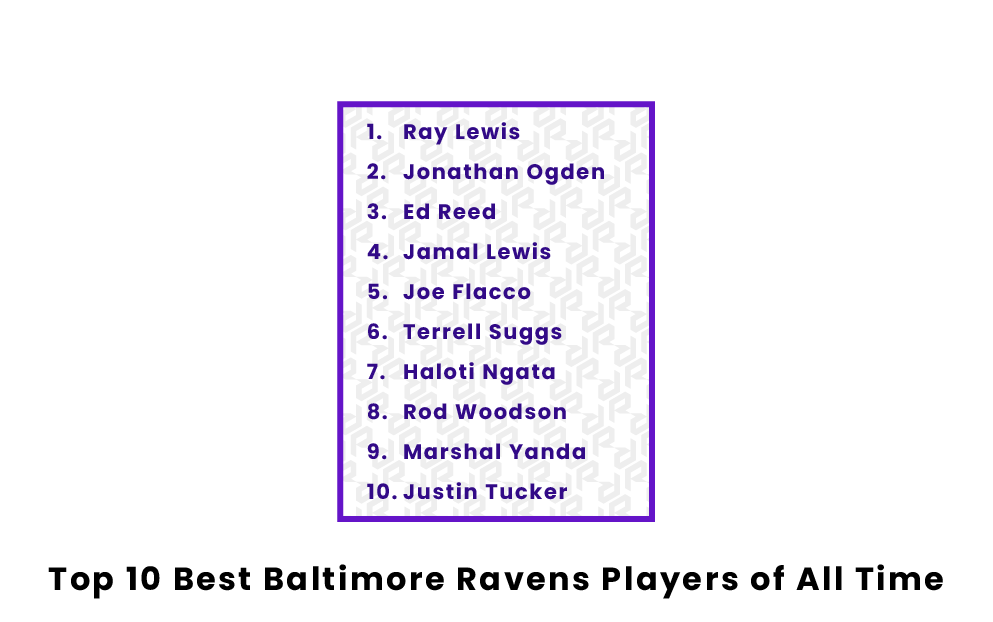 The Baltimore Ravens have found consistent success as a team since the early 2000s, winning Super Bowls in 2000 and 2012. They’ve also won six division titles since the turn of the century. As such, it only makes sense that they’ve had some seriously talented players on their roster. And despite being a young franchise (the Ravens were established in 1996), some of the most memorable names in recent NFL history have played for Baltimore. These ten are the best to have ever put on a Ravens uniform.

Who are the best Baltimore Ravens football players of all time?

Few names in the history of the NFL could inspire such fear in offensive players as Ray Lewis. Lewis was a middle linebacker who was notorious for delivering the most punishing of hits and had the ability to make plays all over the field. His skills were backed up by a true mountain of hardware, including two Defensive Player of the Year awards, 13 Pro Bowl appearances, seven First-Team All-Pro listings, along with three appearances on the Second-Team list. He led the league in tackles in three separate years and was listed on the NFL’s All-Decade team for the 2000s. Despite all these accolades, Lewis is perhaps most beloved for aiding the Ravens in winning their only two Super Bowls, the first coming in 2000 and the second in 2012. In the 2000 win, Lewis was named the Super Bowl MVP for his five combined tackles and a whopping four passes defended.

Jonathan Ogden began his career in the NFL in 1996 with the Baltimore Ravens in what was the team’s first-ever season in professional football. In the games and years that followed, Ogden immediately established himself as one of the team's most important players. He was an immovable offensive tackle, standing at 6’9 and weighing 345 pounds. His incredible abilities as both a run and pass blocker earned him four appearances on the First-Team All-Pro list, which is one of professional football’s highest honors.

He was also named to 11 Pro Bowls over the course of his career, with his first coming in 1997 and his last in 2006. Ogden retired in 2007, and he played his entire career in Baltimore. He was also a part of the Baltimore squad that won the Super Bowl in 2000 and was instrumental to their success that year. As such, he was named to the NFL’s All-Decade team for the 2000s, and was even named Offensive Lineman of the Year in 2002.

Ed Reed is considered by many to be one of the best safeties in the history of the NFL. He was famous for delivering absolutely bone-crushing tackles on ball carriers and also for being quite the ball-hawk with his ability to secure clutch interceptions. Ed Reed was a vital part of the defensive unit that helped the Ravens to win the Super Bowl in 2012.

Reed was also very strong in the regular season, which earned him a ridiculous amount of hardware, which includes five First-Team All-Pro appearances, three Second-Team appearances, nine Pro Bowls, and even the NFL’s coveted Defensive Player of the Year award in 2004. Reed also had three seasons (2004, 2008, and 2010) when he led the NFL in interceptions. And like some of the other players on this list, Reed was named to the NFL’s All-Decade team for the 2000s. Since retirement, he has been inducted into the Pro Football Hall of Fame.

Jamal Lewis is by far the best running back that has ever put on a Baltimore Ravens uniform. In his first season as a Raven, Lewis helped the team to their first-ever Super Bowl victory in 2000. In his rookie season that year, Lewis garnered just over 1,300 yards rushing over the course of the regular season. It was a strong debut season, but it completely pales in comparison to what Lewis accomplished in 2003.

That year saw Lewis put together one of the best single-season rushing performances of all time, with 2,066 rushing yards over the course of the regular season. It stands as the third-best performance over the course of a season, behind only Eric Dickerson and Adrian Peterson. 2003 also saw Lewis run for 295 yards in one game, which stood as the single-game rushing record until it was broken by Adrian Peterson with 296. As a result of his legendary season, Lewis was awarded the highly-prestigious Offensive Player of the Year award.

Despite being outshined by some of the NFL’s other talents at quarterback during much of his career, Joe Flacco is likely the best quarterback to play for Baltimore. He joined the squad in 2008 and had a strong first season as the starter, eventually taking the team to the AFC Championship Game, where they ultimately lost to the Steelers. Flacco’s best season was likely in 2014 when he threw for just shy of 4,000 yards to pair with 27 touchdowns through the air with only 12 interceptions.

Although he didn’t often put on truly eye-popping displays of quarterback play like some of the other quarterbacks in the league at the time, Flacco was a consistent and largely-reliable option for the team and remained that way for many years. Flacco stayed in Baltimore until 2018, but his best moment probably came in the 2012 season, when he guided the team to its second Super Bowl win. Flacco was named Super Bowl MVP for a performance in which he threw for 287 yards and three touchdowns.

Terrell Suggs was an outside linebacker who played for the Baltimore Ravens between 2003 and 2018. In his first season in the NFL, Suggs was awarded the prestigious Defensive Rookie of the Year Award. That season saw Suggs finish with an impressive 12 sacks, six forced fumbles, an interception, and 27 total tackles. It was one of the best performances by a Ravens rookie in the team’s history, but Suggs was saving his best work for later.

In 2011, he put on a defensive masterclass which ultimately earned him the NFL’s Defensive Player of the Year award for that year. That season, Suggs amassed 70 combined tackles, 14 sacks (a career high), seven forced fumbles, and two interceptions. And like many of the other players on this list, Suggs was involved in one of the Ravens’ Super Bowl wins. For Suggs, he played a key role in the 2012 regular season and postseason.

Haloti Ngata was another one of the key defensive pieces that helped the Ravens run deep into the playoffs in 2012, which ultimately culminated in a Super Bowl win. Ngata played defensive tackle for the Ravens and stood at a stout 6’4, weighing 340 pounds. Ngata had the ability to fly all over the field to make plays. His skill and consistency earned him a spot on the First-Team All-Pro list two times (2010 and 2011), along with three appearances on the Second-Team list.

Ngata was also elected to five Pro Bowls, all of which came in consecutive years between 2009 and 2013. 2011 was perhaps the pinnacle of Ngata’s career when he posted a remarkable stat line that included an incredible 64 total tackles along with five sacks. He also forced two fumbles and defended five passes that year. Those numbers show Ngata’s ability to excel with multiple different assignments and is also why the team occasionally had him line up at defensive end.

Rod Woodson would undoubtedly be much higher on this list if only he had spent more time on the Baltimore Ravens’ roster. Woodson only played for the team between 1998 and 2001 but made a significant impact in that span, including helping the team to their first-ever Super Bowl championship. Woodson, like Ed Reed, was one of the premier safeties in the history of the NFL.

He finished his career with six appearances on the First-Team All-Pro list and three Second-Team appearances. Woodson also made it to an impressive 11 Pro Bowls.

In 1993, he was even named the Defensive Player of the Year thanks to his eight interceptions, two forced fumbles, and 95 combined tackles. It was this wealth of experience and talent that Woodson brought to the Ravens’ roster and locker room, and it helped to cultivate a defense in 2000 that many consider one of the best of all time.

Marshal Yanda began his career with the Baltimore Ravens in 2007 when they selected him in the third round of the NFL draft. He retired in 2019, having only played for the Ravens throughout his entire tenure in the NFL. He was an outstanding guard and was one of the core players during the Ravens’ 2012 team, which won the Super Bowl. Yanda managed to amass quite a few accolades during his time in the league, including being named twice to the First-Team All-Pro list, first in 2014 and again the following year. He was also named to the Second-Team five times.

Yanda made the Pro Bowl a total of eight times and was selected each year between 2011 and 2019, except for 2017. He was a highly consistent and completely reliable player for the team throughout many seasons. So much so, in fact, that he was named to the NFL All-Decade team for the 2000s.

Justin Tucker, a kicker who hails from Austin, Texas, began his career with the Ravens in 2012 during their Super Bowl-winning season. He helped secure the win for Baltimore in the Super Bowl by kicking two field goals, and his career has continued on an upward trajectory ever since. He’s been named a First-Team All-Pro in five separate seasons and the Second-Team in an additional two. He’s also made a total of five Pro Bowls throughout his career, with his in 2013 and his most recent in 2021.

Tucker was also named to the All-Decade team for the 2010s. But what Tucker is most known for, however, is a pair of NFL records that he holds. In 2021, Tucker hit a game-winning field goal of 66 yards to secure a new NFL record for the longest field goal. And he also holds the record for the highest field goal percentage, with 91% of his field goals making it between the uprights.

Who is the best Baltimore Ravens quarterback of all time?

The best Baltimore Ravens quarterback of all time is Joe Flacco. Flacco led the team to a Super Bowl win in 2012, which was the franchise’s second Super Bowl win in history. For his efforts, he was named the Super Bowl MVP. He also played for the team for many seasons and was highly consistent in nearly all of them. Flacco was an extremely effective game manager and was able to put together some clutch moments when it counted most.

Who is the best Baltimore Ravens running back of all time?

Jamal Lewis is the best running back who has played for the Baltimore Ravens. Lewis is one of the few players in the NFL who has rushed for more than 2,000 yards in a single season - and he ranks third in single-season rushing yards. He also holds the second-highest single-game rushing total with 295 yards. For that season, he won the coveted Offensive Player of the Year Award. He had electrifying speed and agility that left would-be tacklers guessing.

Who is the best Baltimore Ravens wide receiver of all time?

Derrick Mason is likely the best wide receiver for the Baltimore Ravens in the franchise’s history. He played for the Ravens between 2005 and 2010 and was highly effective at the position. In seasons prior with other teams, Mason was a First-Team All-Pro once and made the Pro Bowl twice. With the Ravens, he might not have made the Pro Bowl or been named an All-Pro, but he managed to gain over a thousand yards through the air in four out of his six seasons with the team.